Handkerchiefs: The secret language of love 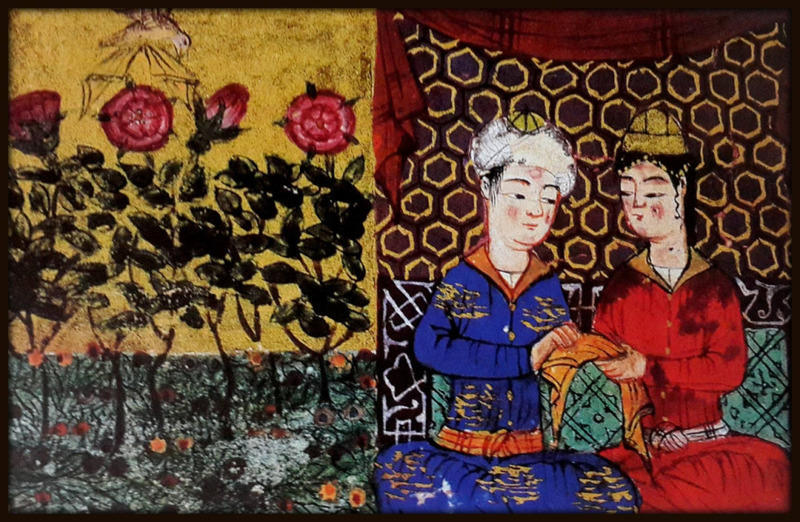 An illustration from the ,Dilsuzname, manuscript prepared in Edirne in the 15th century.
by Ekrem Buğra Ekinci Feb 19, 2016 12:00 am

Throughout history, there have been very few items used for multiple purposes. Among them, handkerchiefs have an interesting story both as decoration and clothing as well a means of communication between lovers

From various writings on Uighur murals from the Medieval Age to the epic tales of Dede Korkut and the Diwan al-Lughat al-Turk (Compendium of Turkic Languages), the first comprehensive dictionary of Turkic languages from the 10th century indicate the reputation of handkerchiefs among Turkic peoples.

Turkish handkerchief culture emerged over years. In one of his famous paintings, Italian Renaissance painter Gentile Bellini illustrated Ottoman Sultan Mehmed the Conqueror with a handkerchief in his hand. Embroidered handkerchiefs were also among the gifts given to foreign guests at that time.

During Ramadan, confectioneries used to be put in precious handkerchiefs with Quranic verses embroidered on its each corner and distributed to the public. Ottoman-era handkerchiefs dating back to the 16th century are on display at the Topkapı Palace.

Chinese villagers used to wear handkerchiefs over their heads to protect themselves from the sun. Venetian sailors introduced Middle Eastern handkerchiefs to Europe, which was very common. The popularity of handkerchiefs boomed in Europe after Othello gave a handkerchief brought from the East to his lover in Shakespeare's famous namesake play. They became a fashion trend in France where they were called "couvrechief" (headgear). Stylish French ladies wore couvrechiefs even if there was no sunshine outside. Indeed, they already had parasols that they used on sunny days. They were then brought to Britain and first called a "kerchief" and when people started to carry them in their hands, they called them "handkerchiefs." Following the death of King Henry VII of England, there were 12 shirts and five handkerchiefs left from his wardrobe.

Initials were often embroidered on the corners of handkerchiefs with silk, silver or gold thread or lace work. Lovers were fond of exchanging handkerchiefs. While men used to keep them in their hats, women kept them in their cleavage. Upon a request from Queen Marie Antoinette, King Louis XVI of France adopted a law to make all handkerchiefs in the shape of a square in 1784.

At that time, handkerchiefs were not used to wipe the nose. People used to wipe their noses with whatever they had. Renowned philosopher and religious scholar Desiderius Erasmus was the first person who wrote in one of his accounts that it was wrong to wipe ones nose on one's clothes and instead suggested the use of a handkerchief. With the changes in social etiquette as well as the discovery of microbes, the popularity of handkerchiefs increased along with the higher priority for hygiene. A handkerchief production industry, therefore, emerged and they got cheaper. Indeed, carrying a handkerchief began to be seen as an indication of elegance. It was also an elegant attitude to fold it in half and put in one's trouser pocket after using it.

In Anatolia, handkerchiefs were used not only for wiping the hands or face but also for carrying or packaging small things or as a tablecloth to have meals on. Money or sugar was wrapped in a handkerchief, broken or injured limbs were fastened with one and people wave handkerchiefs while saying goodbye to each other.

Forgetful people knot the corner of a handkerchief to remember something. Shy women covered their faces with them. Some wipe off sweat with it while some wipe away their tears, depending on the occasion. To avoid dirtying their clothes, villagers wore handkerchiefs around their necks or on their head under their fez. Wearing a handkerchief around the neck meant the person wearing it wanted to apologize to someone. In the past, a piece of shroud used to be worn instead of a handkerchief.

Handkerchiefs used by locals are mostly made of cotton. The corners of a handkerchief feature embroidery, which were sometimes symmetrical shapes and sometimes floral designs. In the past, handkerchiefs were an important part of Anatolian women's attire. Pink handkerchiefs made of silk or embroidered with gold thread were placed on the chest or near the shoulder with a diamond brooch. Men used to place them in their hats or belt. Today, handkerchiefs decorate chest pockets on men's suits as an accessory.

Scenting handkerchiefs with the likes of rosewater or amber and sniffing it was also custom. Handkerchiefs were also rubbed on holy items. Jesus Christ is said to have rubbed his hand on a handkerchief and then sent it to King Agbar of Edessa in what is now Turkey's Urfa province, who suffered from vitiligo, through one of his apostles. The king recovered after touching the handkerchief. During visits on holy days, handkerchiefs rubbed on Prophet Muhammad's holy mantle were given as gifts to visitors because they are believed to bring abundance.

In Rome, the start and the end of a game was generally announced by waving a handkerchief. The heads of Turkish folkloric dance groups also wave a handkerchief and tell when a movement ends and another starts by using it.

Precious embroidered handkerchiefs are always among courtesy gifts that both a bride and groom's side send each other in Anatolian weddings. Handkerchiefs are also a huge part of dowries for girls who are getting married. A roll of cotton cloth was put in gift bags two times a year for palace people to make handkerchiefs.

When a girl threw a handkerchief from her window, it was a declaration of love. If the man stopped and took the handkerchief and carefully folded it and put in his pocket, then it meant he also loved the girl. Throwing a handkerchief on the ground in parks meant the girls wanted to meet the man she loves.

This is why handkerchiefs became an inevitable element in love poems as seen in following lines: "Üsküdara gider iken bir mendil buldum / Mendilimin içine lokum doldurdum," (On the way to Üsküdar, I found a handkerchief / I filled the handkerchief with Turkish delight), "Mendilimin Yeşili / Ben kaybettim eşimi / Al bu mendil sende Dursun / Sil gözünün yaşını" (Here is my green handkerchief / I lost my love / Take this handkerchief with you / Wipe away your tear) and "Yar yolunu kolladım / Beyaz mendil salladım" (My love, I waited for you to come/ I waved a white handkerchief.)

After 1882, handmade women's handkerchiefs became an industrial product in Anatolia and natural dyes adding value to handkerchiefs were changed to chemical dyes. Embroidery and lace work were also done away with. Traditional figures illustrated on handkerchiefs since the Seljuk period have been forgotten. Nevertheless, handkerchiefs have always had an important place in our lives. Teachers used to check whether students had handkerchiefs or not at schools. Children also play the game of catching a handkerchief. Following the arrival of paper tissues, cotton handkerchiefs lost their popularity and have perished from our lives.
Last Update: Feb 19, 2016 4:55 am
RELATED TOPICS