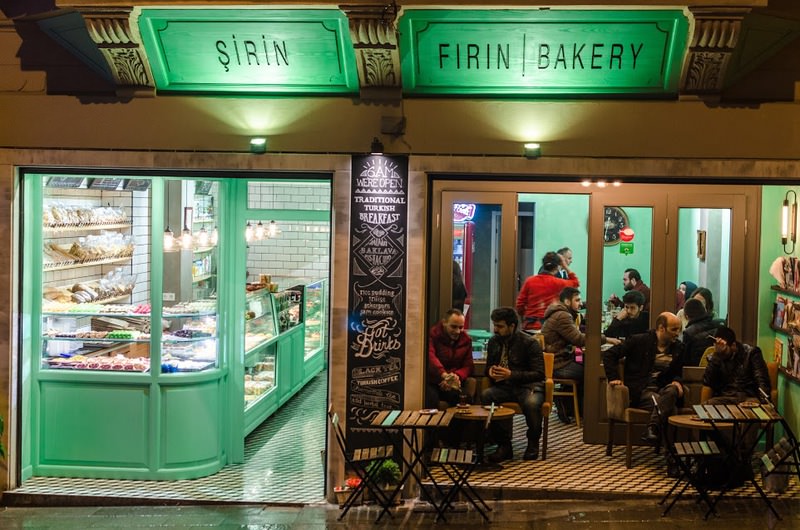 Serving sweet pastries near a cup of tea or coffee is part of Turkish tradition, especially when visiting a friend or relative. Well aware of Turks' affection for fresh desserts, Istanbul's boutique patisseries and cafes can satisfy your sweet tooth

Tea production has roots in the Black Sea region where tea plantations are centered in the town of Rize and have extended along the borders of Trabzon and Ordu since the early years of the Republic. Turkish tea, which is carefully brewed to perfection and offered in a delicate teacup, is the epitome of Turkish culture. Turkish coffee however, is not too far behind. Around 1555 during the reign of Sultan Suleiman, coffee was introduced by Özdemir Pasha, the Ottoman Governor of Yemen, and coffee took its place in the Palaces of the Sultans. The "Coffee Maker" was chosen based on loyalty and the ability to keep secrets. Coffee made its way into the public sphere with the establishment of coffee houses, which were a place where people came to read books, play backgammon and share a secret or two. Today, there are numerous boutique venues where you can enjoy your tea or coffee with sweet pastries.

The fact that this dainty patisserie and bakery is just steps away from the Galata Tower, offering fresh sweets with colorful "curb appeal," is not what attracts visitors. The rainbow of color choices this patisserie has to offer is what lures visitors and leaves them feeling as if they've discovered the treasure marked with an "x" on the map. Owner Hasan Çayır is as sweet as the desserts he serves, a native of the area and a confectionary connoisseur. This particular shop has been opened since May 2015 and is making a bold statement. Often mistaken as a Europe-inspired project, Architect Ersin Almaz, states that it is, in fact, an attempt to reclaim a lost form of art, which originally belonged to Turkish people. According to Almaz, we are in a grey state, because if we look at history, our buildings, which are rich in color, innovative and creative in design - as well as our mosques -- are a testament to this. The delicately designed patisserie is still a work in progress but there is no denying that, while the interesting color choice of green is what initially draws you in, it's the finer details that will keep you there as you sip your fresh herbal tea from an exquisite cup of fine china and indulge in a wide selection of sweet and savory. While most cafes go for the trendy bookshelf, this patisserie has chosen to dedicate a wall to vintage bookmarks. The same motif is followed through on tables with postcards. One can't help but run down memory lane and be transported to a similar place of joy by the images that take place on your table. The two purple velvet chairs bring a regal aura to this nostalgic patisserie.

Hidden in plain sight on the busy street of Barbaros Boulevard in Beşiktaş is Kırık Fincan. The nine steps that take you down to the entrance of this hidden cafe is a wonderland of delicate flowers, pastel colors and a patchwork sofa that's sure to allure you into comfort. The family owned cafe is run by the trio of mother Melihat Gider, actor daughter Fulden Akyürek and son Miraç Akdirek. The French provincial designed cafe has an interesting ornament in every corner that fits together like a picture perfect puzzle. The collection of Turkish teacups that is on display and is a queue to attest to the fact that they know how to make Turkish Coffee. "Kırık" meaning broken or fractured and "fincan," the traditional Turkish tea cup automatically leaves you feeling sentimental. A menu that is exclusive to Kırık Fincan, as everything is a family recipe, has winter covered with their thick, hearty, winter soup, summer with home-made cheesecake and all seasons with a hint of clove flavored tea and Turkish coffee that's brewed to perfection. No Istanbul cafe is complete without a permanent cat as its resident guarding the place. The cafe's placid cat, though nowhere to be seen, has its home nestled in the corner at the entrance ready to silently welcome its guests.

Located in Üsküdar's Çengelköy, Boon Cafe is an elegant place for its class and charm. The cozy outdoor seating overlooking the Bosporus is kept warm in winter with outdoor heating but, without doubt, the summer season brings these quarters of the cafe; to life. The scene is nothing less than picturesque, offering a full view of the mesmerizing sea and the bridge, which links Asia to Europe. Whether you are there on your own seeking refuge from the chaos of Istanbul's traffic or visiting with a group, you can find solace in watching the golden sun set behind the bridge as you cool down with a non-alcoholic cocktail from a wide selection. The well decorated interior, with trendy and hip lighting, a bookshelf that seems to extend to the ceiling supporting a set of ancient encyclopedias - printed long before the invention of Google - complement the antique paraphernalia that are nestled on the shelf. Spacious enough for a private conversation but intimate enough to not feel isolated, the staff at Boon café will set your first challenge with their menu. You won't be the first to ask for a few extra moments from the courteous and exceptionally perceptive staff while you flip a coin, letting head or tails be the deciding factor of your meal choice because the extensive menu offers everything imaginable. From mouth-watering breakfast and appetizers all the way to steak dinners, it truly isn't over until the "fat lady sings." All of their meals are prepared in an open kitchen by professional chefs. With all the options the menu has to offer, don't forget to save room for dessert. The fat lady is not singing until dessert is served; and judging by the bakery section of the restaurant, she will sing. The question isn't what shall I have, but rather, "What shall I have this time?"
RELATED TOPICS