Two sides of the Gallipoli War 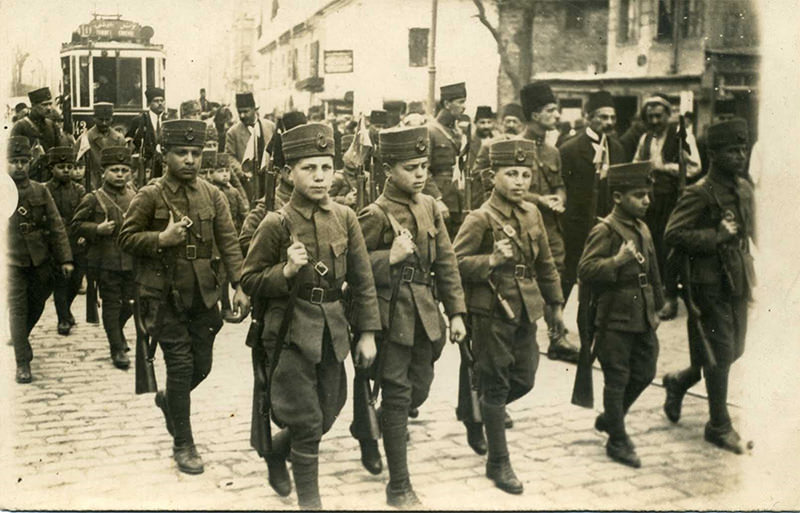 Today marks the 101st year since the Gallipoli naval battle of World War I, which ended with a unique victory against the Allied forces. Yet the high casualties and successive battles led to the collapse of the Ottoman Empire

In the summer of 1914, Europe, and later the other powers, found themselves in the middle of a war. The assassination of Austrian Archduke Franz Ferdinand by a Serbian terrorist was the excuse behind the war, but no one knew the real reason. Afterward, Germany's desire to be a part of Britain and France's colonial ambition was considered as the reason. It was first thought to be a local war that would last for a short time, but it ended up lasting four years with millions of people killed. From submarines to tanks and poisonous gas, various technical inventions were tried during the war. The agreements after World War I forced the defeated countries to pay very heavy prices, leading to the breakout of a much bigger disaster after 20 years, World War II.

Although there was no apparent reason, Russia and the Ottoman Empire also got involved in the war that was between Germany, Britain and France. Russia was already an ally of Britain and France, but it was nothing more than suicide for the Turks to join the war. The so-called "patriot" Committee of Union and Progress (CUP) leaders who lost Ottoman lands in Bosnia, Bulgaria and Tripoli without even blinking their eyes were after taking back the Turkish lands that had been lost over the last two centuries. They were also trying to establish first an Islamic and then a Turkic union. This fantasy cost the Turkish people dearly. The Turkish army was soundly defeated and millions of soldiers and civilians were killed. Let alone taking back the lands that the Ottomans had previously lost, territory mostly populated by Muslims was lost in World War I.

The war lasted four years, but it took nine years for the Turks. It froze in the memories of the nation as one of the biggest disasters in Ottoman history. During this long period, the Turkish army won a couple of local battles that can be considered as badges of honor for the army. The naval battles during the Gallipoli Campaign in 1915 were one of them. The aim of the British and French battleships that came to the Dardanelles was to help their ally Russia, which was fighting against Germany, and force the Ottoman Empire to surrender by entering Istanbul by sea. Thanks to genius German staff officers who served in the Turkish military and the bravery of the Turkish soldiers, the Turks achieved a unique victory against a powerful enemy. However, this victory brought more harm than benefit.

The Gallipoli Campaign had two phases, including naval and ground attacks. Cevad Çobanlı Pasha served greatly in the naval victory that ended on March 18. Esad and Vehib Pashas, who were brothers, led the ground attacks that began in April and continued until August. Then Lieutenant Colonel Mustafa Kemal was the commander of reserved units during the ground attacks. He orchestrated and attacked the Anzacs on April 25, who landed in Gaba Tepe, what is now known as Anzac Cove, and marched to Chunuk Bair with 57th Regiment without waiting for orders from his superiors. He then activated other regiments. On Aug. 9, he repelled the British, who marched to Suvla Bay. When his proposition for a counterattack was not accepted, Mustafa Kemal resigned and withdrew from the front.

The Gallipoli Campaign was a battle of reserve officers. The campaign caused the deaths of tens of thousands of highly educated young men who were brought up during the reign of Sultan Abdülhamid. The casualties in the campaign reached almost 250,000, including the dead and wounded. These highly educated young men who were trained during the peaceful, 30-year reign of Abdülhamid were brought to the battle front and many high schools and universities had no graduates. This is why the battle looks more like a defeat than a victory. Since defensive battles are relatively easier than attacks, the number of casualties is surprising.

Lord Kinross once reported a story that Mustafa Kemal ordered the soldiers at Suvla Bay to attack and fight in close quarters to the death. He said: "If you do not have bullets, you have bayonets," and the cavalry commander under Mustafa Kemal's command hesitated. Mustafa Kemal asked: "Did you understand what I said?" He said: "Yes, sir, you ordered us to die." Hence, the phrase: "I am not ordering you to fight, I am ordering you to die," entered into war history.

Lord Kinross also accused Mustafa Kemal of not being able to predict the naval gunfire support during the Gallipoli Campaign. Esad Pasha, on the other hand, accused Mustafa Kemal of launching the attack without waiting for orders from the headquarter and causing the deaths of everyone in the 57th regiment, including the commanders of the Arab regiment. In fact, the Suvla Bay Battle was not considered a victory back then. Some attribute these accusations to the jealousy of War Minister Enver Pasha of Mustafa Kemal. Back then, however, Enver Pasha was not the one who should have been envious. German Gen. Liman von Sanders soothed Enver Pasha, who accused Mustafa Kemal of causing the deaths, saying was not the reason thousands of soldiers froze to death in Sarıkamış, as it was Mustafa Kemal who resigned from his duties following Enver Pasha's behavior. Afterward, Mustafa Kemal told Mademoiselle Corinne, whom he knew from Bulgaria and exchanged letters in a cynical manner, that Ottoman soldiers followed his commands and ran to death in order to go to heaven and meet the "houris."

Mustafa Kemal did not want to be involved in the war with British forces. However, he requested to join in a combat unit where he would obviously be promoted. He was assigned to be colonel in Çanakkale and, without waiting for the end of the war, he struggled for unilateral peace. This is why he crossed the ruling CUP leaders. He even asked Cemal Pasha, known for his pro-French proclivities to stage a coup. He said: "You will become Grand Vizier and I will be war minister. And then we can make a separate peace agreement." Cemal Pasha, however, did not accept out of fear. When Mustafa Kemal headed to Anatolia as army inspector in 1919, journalist Ruşen Eşref published "An Interview with the Hero of Anafarta Spur," and made Mustafa Kemal known to the public. On the other side, the CUP took advantage of the Gallipoli Campaign to show itself as the hero to the public because it later got involved in the Ankara movement. In other words, the Gallipoli victory was exploited to canonize the CUP.

Even the Bolshevik Revolution might not have happened, as the allied powers provided help to Russia. This would have avoided the establishment of communist regime that made the world groan bitterly for 70 years. Millions of Turkish-origin people might not have become the victims of massacres. The Bolsheviks might not have invaded the South Caucasus and Azerbaijan, Georgia and Armenia.

If the allied powers had passed through the strait, they might not have treated the Ottomans in such cruel way and who might not be seen as war criminals, as they prolonged the war, although it was not directly related with the Turks. On the other hand, the Turkish republic might not have been established either, while national heroes like Mustafa Kemal Atatürk and others emerged in Ankara. The appearance of Turkish territory might not have changed.

It is also said that the allied powers did not much prioritize passing through the Dardanelles, as they were able to pass it easily, but rather stuck on the war front to just delay the Turks. The seriousness of the famous phrase "Çanakkale is impassable" was understood after the strait was passed in no more than three years. Alas, local victories in big wars are not important, as the results are what we need. In the first 30 minutes of a football match, goals can be scored, but the final score is what is important.