Muslims side by side in Kaaba; why divided back home? 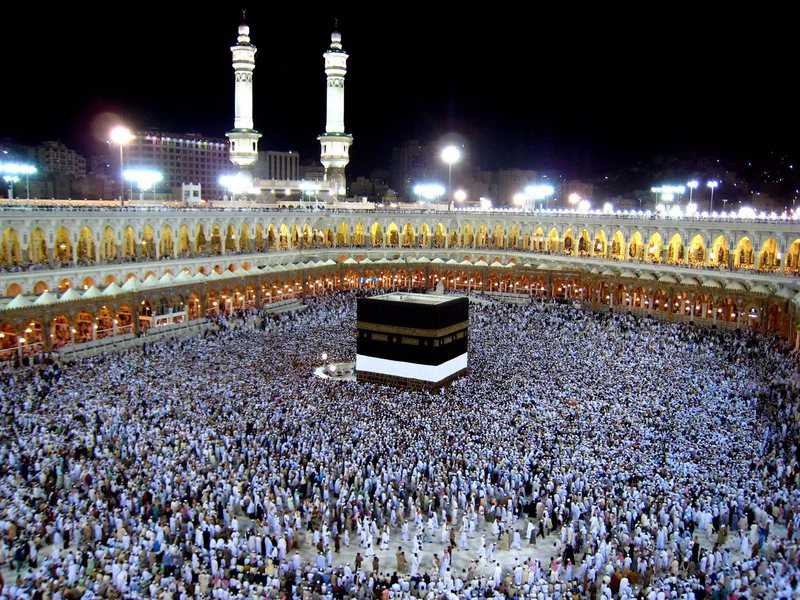 The Kaaba, a black, cubic structure in Mecca referred to as the ‘House of God,' stands as the symbol of unity among Muslims worldwide. Yet, even though a true representation of brotherhood is manifest at the holy site, Muslims are somehow unable to sustain the same sense of brotherhood once they resume their everyday lives, with hostility replacing brotherhood

The adhan had already been called for sunset prayer in Mecca. So I dashed from my hotel room to Masjid al-Haram to join the congregation before the imam began leading the prayer. Knowing I was a tad late, I elbowed my way into the center where I could face the Kaaba while performing my prayer, but to no avail. The closest spaces were all taken.

After a brief glance around, a tiny spot in the women's section caught my eye. I literally leaped to squeeze myself into the already-jammed line before anyone else could seize the vacancy. Perfect timing! The women in my line moved a little more - as much as possible - to fit me in "comfortably" and just then the imam began reciting the iqamah, the second call after the adhan. This meant he was about to commence the prayer. Before I could look to see who I was standing beside in the prayer line, the imam said the takbir, "Allahu akbar." Meaning "God is great," the term is recited at the beginning of every prayer.

As he began reciting the verses of Quran melodiously in his magnetic voice, I felt lighter; lighter in a sense that with every single word, I felt my worries gently leaving me. It was hypnotic and I was utterly captivated.

But alas, the sensation did not last long. There was some sort of distracting movement to my left. The woman standing next to me began to shake for a reason I could not identify. She could hardly perform her prayer - which I could see through a side glance. The sob-like sound accompanied the unidentified movement further provoked my curiosity. Since focusing solely on one's prayer is necessary, I had to wait until our prayer had finished.

When prayer - which felt like a century to me - was over, I could finally turn to see what actually was happening on my left. There was a young woman of dark complexion with bloodshot eyes. It was obvious she had been weeping during prayer and beside her was a boy sitting in a wheelchair. He seemed to be about five years old and was both physically and mentally disabled. He was still pushing his mother back and forth - the source of the "unidentified" rocking during prayer was no longer a mystery.

I wanted to talk to her but was not sure how I would start the conversation. I plucked up my courage and asked her where she was from. Not that it mattered; I just wanted to communicate with her.

"I am Turkish," I responded, "Shall we pray for each other?"

Tears began rolling down her cheeks again. "My son! Pray for my son. Please!" she cried. Her cries were so heart-wrenching that I do not think it will be erased from my memory any time soon.

I nodded, avoiding any further words. Had I attempted to say anything, I knew I could not help crying too. So I turned again to the Kaaba, the "House of God." They were all the words that we had exchanged. It was probably the shortest conversation I ever had, but something remarkable had just happened: Two strangers, in a geography that is totally foreign to them both, were praying for each other in two different languages. It was incredible.

At a place where differences had no significance, we were the guests of God. Hence, we were very careful not to upset our host. We knew none of us, black or white, Shiite or Sunni, rich or poor, were privileged in the presence of God. We were competing to please one another, because we knew that this was also the way to please the Creator.

While sitting within the confines of this site, a random offering of dates and a range of fruit and nuts is common. There are also some who deliver glasses of zam-zam water for the thirsty who were burning under the glaring Mecca sun. We would at least smile at each other if could not do anything else. This way, we believed, we were spreading a teaching of Prophet Muhammed who said "Giving a smile is charity." Before each daily prayer, I ended up sitting next to a variety of people of different ethnicities and from different sects. Some had come from Egypt, some Malaysia, some Iran, some Indonesia and some from East Turkistan (Sinjar). We did not have a common language. Most of the time they did not speak English.

On one occasion, a woman named Reda invited me to her home in Cairo. The lack of a common language was making it near impossible to have a proper conversation, but our equally intense efforts to understand each other was just as worthy of one in my eyes.

"You have Whatsapp? Talk there?" she asked in her broken English. I stopped to think for a moment: "How on earth will we communicate without speaking a common language?" While I was questioning the logic of exchanging our phone numbers - which took seconds - I saw how excited she was to make a new friend. Her eyes were glowing and I reciprocated with a smile. I pondered then: "Why would we need long sentences?" Would not a simple "hello" be enough to melt the hearts and spread peace thousands miles away?

As Prophet Muhammad said: "You cannot attain Paradise unless you have faith, and you cannot have faith unless you love each other." The Quran also says, "The believers are brothers of one another" (Hujurat: 10). Together they mean Muslims are brethren and love one another.

It is easy to observe this within the confines of this special masjid, but the problem begins as soon as we leave the Kaaba. We go back to where we left off. And where we left off is usually discrimination, strife and hostility.

Although Islam basically hones in on the core principle of "loving each other and spreading peace," we Muslims tend to pass over this bedrock and instead are occupied - or better said "choked" - with details such as: "Would my fast be broken if I brush my teeth?" "My finger is bleeding, do I need to make wudu [ablution] again?" or "A curl of hair got out of my headscarf, should I re-do my prayer?" et cetera.

Muslims have been preoccupied with such questions since the death of Prophet Muhammad, which eventually led to the emergence of sects. Sectarian discussions followed strains and morphed into chaos in the Islamic geography. Marginalized sectarianism fed by political struggle engulfed the entire Middle East and has been the cause of immense bloodshed for centuries. Quite contradictorily, while we complain about the West's discrimination of Muslims, we fail to dispel factious sentiments that persist among ourselves.

Why it is so hard to see sectarian violence is tearing apart the entire Islamic geography? This unabated "feud" fanned by aspiration for political leadership has been marring the texture of Islamic teachings and leading violence to be associated with Islam, when in reality Islam condemns it. How can we seek tolerance when we do not have it ourselves?

So, in short, when we leave this holy site where we are super-attentive not to do any wrong and go back home, the scene that we encounter - and unfortunately are also a part of - appears to be division, hatred and discrimination.

Amid this bleak reality, a question keeps echoing in my head, the answer of which I surely know: Even if we are thousands of miles away from the house of God, do we still not face the same qiblah five times a day?