Rethinking the imperial harem: What did life look like for Ottoman palace women? 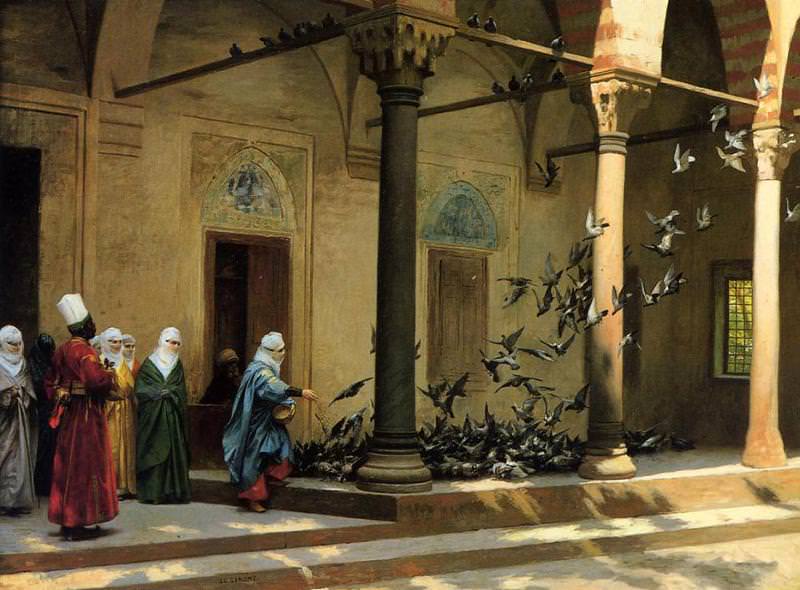 Perceptions of the Ottoman harem have changed over time, but contrary to the prevailing opinions that criticize it, the harem always preserved its structure as a school for jariyahs from different ethnicities and bore some similarities with elite schools for girls run in the period

Whether it was in the city or village, every Turkish home used to include two sections: a "harem" and a "selamlık." The harem was the portion of a house reserved for women, and only male relatives were allowed in. The selamlık, on the other hand, was the place where male guests were hosted. The word "harem" is derived from the Arabic words "hurmet" and "haram" (forbidden by religion) and it means "the place that is forbidden to outsiders." The harem of the Ottoman palace feat was the residence of the sultans along with the shahzades (princes), their mothers, wives and children. Similar to harems in every house, there were jariyahs (ladies-in-waiting) in the imperial harem to serve the residents.

The jariyahs brought to the palace took colorful Persian names like Dilfirib, Nazikeda, Gülruh, Mihrişah and Perestu. They were provided a thorough education and disciplined. They learned how to carry themselves properly, how to read and write, basic math and embroidery as well as religious teachings. Although it was not a systematic institution like the Enderun, where intelligent and gifted young men were trained to become men of state, the harem was a type of school for girls, but should not be compared to modern schools. It was rather a home for education, where girls were provided with essential and useful schooling, and more importantly for the context, they were taught good manners. The harem was reminiscent of finishing schools for ladies to which European elites used to send their daughters.

Whether the girls that were brought to the palace were suitable to palace life or not was revealed in the harem as well. The phrase: "A person who cannot be disciplined in the palace cannot be disciplined anywhere else," is famous. Girls who refused to behave in a disciplined way were not allowed to stay in the palace and were married off to a commoner. Manners and principles were the most important things in the harem and a person who lacked manners or failed in speech and religious practices could not stay in palace.

Young jariyahs who completed their education and training served in various chambers or places in the palace, such as the treasury, kitchen, cellar, laundry room, bath, coffee house and infirmary. There were senior jariyahs in each of these chambers and they were called "usta" (master) or "kalfa" (forewoman).

Although jariyahs were slaves, all the jariyahs in the palace were paid wages. Moreover, jariyahs were presented gifts regularly at certain times, but they saved the presents and gave them in charity as they did not have any expenses. One they reached a certain age and level of education, jariyahs were married off to young men who were assigned an occupation following their graduation from the Enderun School. The girls who left the palace by marriage set examples in public with their grace and intellect, and thereby palace manners spread to the public through former residents of the Ottoman harem.

In the early periods of the Ottoman Empire, jariyahs were mostly descendant of Balkan region, but then the number of Ukrainian descendants, whose women were famous for their beauty, increased over the years. These girls were a part of the sultan's share of the booty and spoils of war or they were presented to the sultan as gifts by foreign rulers. During the period when conquests were in decline, jariyahs captured by the Crimean khan were sent to Istanbul and taken to the Ottoman palace. When conquests completely stopped, jariyahs began to be taken from slave traders.

In the 19th century, most jariyahs in the imperial palace were taken from the Caucasus. After Sultan Abdülmecid banned the slave trade, the number of jariyahs radically decreased. Instead, young girls from Caucasian families who has migrated to Anatolia were taken to the palace and trained in the harem.

Not only the imperial harem, but also the harems of the sultan's daughters, like Beyhan Sultan, Hadice Sultan, Adile Sultan, Saliha Sultan and Cemile Sultan, used to have well-trained jariyahs and were designed like a school. They treated these girls like their daughters and there were sultans and shahzades who fell in love with them. They were all beautiful and smart people. They knew the rules of elocution, were well aware of the Quran and Islamic rules and prayed devotedly. They were also interested in embroidery, literature, poetry and were very kind and dignified.

Most of the women could speak and write in French in the later years of the empire. A jariyah used to read and translate foreign fashion magazines to others and another jariyah specialized in photography took photographs in the harem. Those who got a closer look at the imperial harem and visited the palace during the last decades of the empire could not hide their astonishment.
Last Update: Apr 01, 2016 1:25 am
RELATED TOPICS