The art of the meddah: Traditional Turkish storytelling 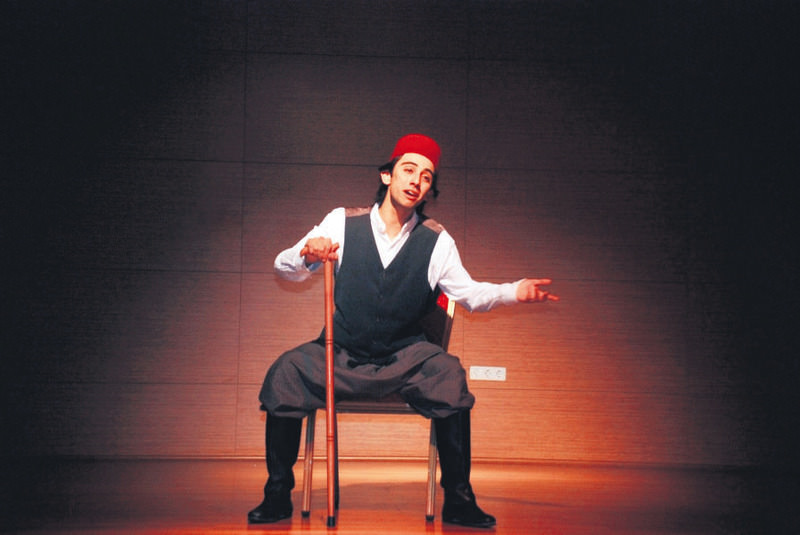 Long-established, traditional Turkish storytellers, known as 'meddah,' used to perform at coffeehouses, palaces and markets, illuminating certain subjects to audiences while entertaining them with absorbing, critical and satirical stories

The art of the "meddah," who is a public storyteller, is an ancient profession influenced by the Abbasid dynasty. The Arabic word "meddah" refers eulogist - to a certain extent - and it is "qassegoo" in Persian, meaning "the one who tells stories." At first, meddahs assumed this title, as they were people who praised and entertained rulers and notable figures by telling funny and suspenseful stories and performing imitations. Afterward, the art of meddah became an individual and honorable art.

Meddahs used to be the most popular entertaining figures during the holy month of Ramadan. They would sit in a coffeehouse and perform later in the evening. The performance venue of each meddah would be announced beforehand. Everybody had a favorite meddah and coffeehouses tried to tempt famous meddahs to perform at their place. 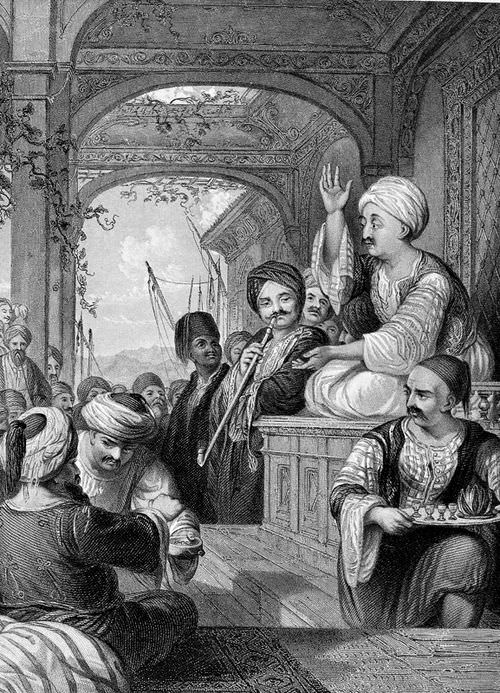 Even before a meddah took the stage, people used to flock to coffeehouses following Tarawih prayers. Coffeehouses got so crowded that waiters ("çırak" in Turkish) had a difficult time serving all the customers. The place was full of people sitting on divans either for relaxation or waiting for the meddah. More people tried to squeeze in around the round tables than could fit. Those who had just come from Tarawih prayers in a distant mosque could only find seats far away, but would try to get closer. Since tea was not a part of everyday life at that time, customers ordered coffee and hookah. If it was winter, coffeehouses' regulars had the privilege of sitting on a chair next to the heating stove. After a while, hookahs began to bubble around the coffeehouse and waiters ran around serving cups of coffee and hookahs with red tubes. Stoking the hookahs' coals was one of the duties of the waiters at coffeehouses.

And then the time came when the meddah sat on a tall chair for everybody to see him. He threw his printed fabric handkerchief on his shoulder, hit his stick to the ground three times, clapped his hands and began to tell a rhyme, starting: "Hak, dostum, Hak!" (It is true, my friends, Allah's truth.) He tried to stress that his words were the truth and indirectly used to use God as a witness for what he was about to tell. Hak is one of the names for Allah in Islam. Then the meddah began telling his story. He often used the stick in his hand to either silence the crowd or imitate certain sounds or objects such as a saz, broom, rifle or horse, and he had headgear or a tambourine in his basket or jacket to be used according to the person whom the meddah was impersonating.

Meddahs were trained in a master and apprentice relationship. Meddahs' intelligence, memory, ability to Speak eloquently and mimicry were influential. They knew so many good stories and told them in such a way that everybody listened in silence. Meddahs surprised everybody as they came up with unimagined and unheard stories. A meddah's speech was spontaneous. He used to take audiences on a journey to ancient times in faraway lands. They used to analyze the crowd before telling a story and spoke in the right time, rubbing the audience the right way. Sometimes, a meddah would fix his eye on somebody and spoke as if he was telling his story only to that person. This would make the audience pay more attention.

Meddahs would launch forth with a couplet such as "Now, listen to a story that the audience will enjoy as the adventures are told." They also stressed that the stories they told occurred a very long time ago in a faraway land, acquitting the people in the audience. A meddah was a humble man - when he finished his story he apologized to the audience, saying: "If I said something wrong without any intention, forgive me." He always concluded his story and let the audience figure out the moral.

Meddahs were not only people who entertained the public. Almost all of them had a general knowledge about culture and they spoke perfectly and appreciated good poetry and music. They were able to analyze people's personalities like a psychologist and social incidents like a sociologist. They also touched on political issues with irony and criticized men of state in a well-behaved manner if necessary, serving as an opposition in a way. People did not get angry at meddahs because valuing art and lending an ear to the right comment was a habit and meddahs' words held an important place in society.

Sultan Murad III had a meddah named Eğlence, which means entertainment. İncilli Çavuş, who was famous for his jokes, witty remarks and dialogues with sultans, was the most popular meddah during the reign of Sultan Murad IV. In the 17th century, meddahs such as Tifli and poet Medhi and in the 18th century, Dilencioğlu, Şekerci Salih, Kör Osman, Âşık Hasan, Güzel Emin, Tesbihçioğlu Nazif, Musahip Nuri and Kız Ahmed came to the stage.

Nedim, a renowned poet of the Tulip Era, mentions meddahs in his poems. Some of the last representatives of this art were Mahmud Baler, known with his nickname "Bal Mahmud," and late actor Erol Günaydın. From a certain perspective, talk shows have some similarities with the art of the meddah.

İsmet Efendi was the most famous meddah of Sultan Abdülhamid's period from 1876 to 1909. Another was Aşki, who used to reach in his basket and take out a relevant headpiece before mimicking someone else. He would wear a fez when he was mimicking a Greek from Karaman, a kufiyah for an Arab or Kurd, a felt cap for an Albanian, a papakha for a Circassian and another traditional headwear piece for an Armenian.

Meddah Süruri was famous after 1908, the year coinciding with the second constitutionalist period. The jokes he told in long stories were quite liked by viewers, especially when he was imitating a scene in which a black harem agha takes a class from an Armenian master, all people in the coffeehouse would burst into laughter. Following a military mobilization, Süruri was called up and began his drill at the Bayezid Tower. When the commander aligned soldiers and put heavy Süruri at the front, soldiers laughed boisterously. The soldiers would listen to his imitations and when they saw him they could not help but laugh. Even his movements made them laugh. The commander got angry, but even with Süruri standing in a proper position soldiers continued to laugh. When the commander realized that he could not deal with him, Süruri continued his military service as a typist. It is unknown what other clerks did with him.
Last Update: Apr 08, 2016 3:05 am
RELATED TOPICS