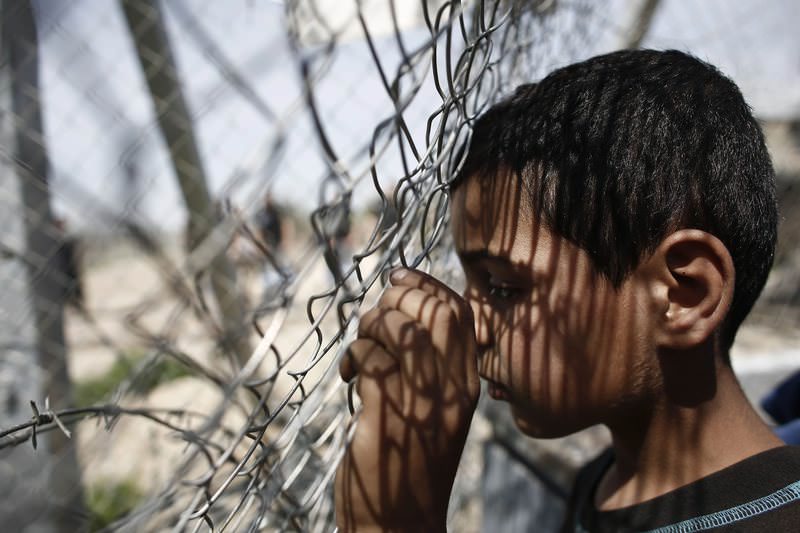 The first poster is heart-warming. Many Turks share this sentiment. They welcome the Syrians with open arms. They are aware that these refugees have been driven from their homes and are not welcome in Europe. These Turkish well-wishers are able to establish empathy, and sincerely want the Syrians to come and share their bread, their land and their lives. However, there is a significant number of people in Turkey who can only be called NIMBYs (not in my backyard). The acronym NIMBY originally appeared in the 1980s, as a reference to neighborhood protests against power plants or factories being built in or near a particular area. NIMBY and NIMN (not in my neighborhood), however, also refer to attempts to maintain racial identity within a particular neighborhood or residential area. Such movements were carried out in order to prevent people from different racial backgrounds moving into certain neighborhoods.

The "do not touch my valley-NIMBYism" encapsulates the idea that it is fine for Syrians or other refugees to come to Turkey, as long as they are not placed in the neighborhood in question. Or perhaps that they should stay in Europe. Indeed, there are those who, in a fit of Trumpism, want all refugees to go somewhere else, as long as it isn't Turkey.

The Republic of Turkey has not really faced such a challenge before. But this does not mean that this region is a stranger to multiculturalism. The Ottoman state was one based on multicultural principles. Here, we are not advocating returning to the Ottoman state; not only would such a suggestion be untenable, it would be anachronistic. However, the fact that although in some aspects the Ottomans were behind the times, they were well before their time in other areas should be acknowledged. Multiculturalism is just one of these aspects.

The Ottoman state was established in a region where Christians, Muslims, Jews and Arabs lived. The borders of the Ottoman Empire included Balkan countries, Turkic republics, the Arab peninsula, Syria, Iraq, Lebanon, Israel, Jordan, Palestine, as well as North Africa, Sudan, Djibouti, Eritrea and Somalia. Naturally, a wide variety of religions existed within this massive area. According to many respected historians, the adherents of different religions, be they Muslim, Christian, Jewish or other faiths, lived in relative peace and security in the Ottoman state.

The basic component of the multicultural system in the Ottomans was the millet (community or nation) system. That is, different nations and different religions were recognized, and allowed to enjoy their unique characteristics, to celebrate the differences. There was no "melting pot" approach, something that is now passe and frowned upon. There was no "mosaic," that is, the idea that little patches of differences make up a beautiful whole. Rather, each community had its own traditions, language and law. Multiculturalism, as an approach to society, does not try to create a homogenous society nor to standardize cultural or traditional mores.

Multiculturalism is committed to "the protection, promotion and maintenance of ethno-cultural diversity, which in turn, provides opportunities to the minorities to preserve, maintain and express their distinctive cultural form, lifestyles and rights." Multiculturalism celebrates the differences, liberating minority groups to enjoy their own traditions, languages and practices. Such multiculturalism underpins social and cultural rights and as a result, minority groups comfortably take their place in society.

The Muslims would go to the Muslim courts, the Jews to the Jewish courts and the Christians to the Christian courts. These courts were civil courts; the Ottoman courts ruled over crimes or matters of public security. Each community collected its own taxes to be given to the government. Security of life and property for the non-Muslim was the responsibility of the state.

Indeed, this principle of multiculturalism was not something the Ottomans just stumbled upon; it is found in the Quran (5:48): "For every one of you we appointed a law and a way. And if God had pleased He would have made you a single people, but that He might try you in what He gave you. So live with one another in virtuous deeds."

In the Ottoman state, every millet was able to speak its own language as well as to set up schools that taught its own religion, traditions and culture. This led to a polyglot society; in fact, multiculturalism often leads to a multilingual society. Lady Mary Wortley Montagu, who visited the Ottoman Empire in the early 18th century, said you could hear Ottoman Turkish, Greek, Arabic, Farsi, Russian, German, Dutch, French, English and Italian, among other languages, being spoken in the Ottoman Empire.

A particularly important point that should be underlined here is that when Western Catholics were persecuting Jews, the Ottoman State opened its gates to them. The Jews fleeing the Spanish Inquisition found shelter in the Ottoman lands.

An interesting historical first came in front of me the other day, and led me to thinking about the multicultural nature of the Ottomans. A citizen of the Ottoman Empire, Ahmet Ali Effendi, is said to have been the first pilot of African descent. Ali Ahmet was born in 1883 in İzmir. His mother was Zenciye Emine Hanım, a woman from the Yoruba. It is thought that Ahmet Ali's father, Ali Bey, was either of Arab descent or mixed Turkish and African ethnicity. Ahmet Ali entered naval technical school in 1904, from which he graduated as a first lieutenant. Ahmet Ali Effendi then took aviation courses at the naval flight school and became a member of the Ottoman Air Force. Ahmet Ali Effendi started his service in November 1916. Now a captain, Ahmet Ali went to Berlin to complete aviation courses.

To understand the significance of Ahmet Ali Effendi's historical contribution, one need only compare his history with that of another contemporary pilot, Eugene "Jaques" Bullard. Bullard was the first African-American pilot. Bullard flew with the French Aéronautique Militaire as an air gunner. He then joined the Lafayette Flying Corps on Nov. 15, 1916, and operated on the Western Front during World War I. When America entered the war, the Americans who were serving in the Lafayette Flying Corps were recruited to join the American air force. However, although Bullard underwent the medical examination, he was not allowed to join the U.S. forces, as only white pilots were accepted.

Bollard gained fame in France, being invited back to help light the flame at the Tomb of the Unknown Soldier at the end of the 1950s; he was also awarded with the Legion d'honneur. Yet, back in New York City, Bullard worked as an elevator operator and died in obscurity and poverty.

Ali Ahmet Effendi had a very different fate. He remained in the military forces until he retired in 1949. During the War of Turkish Independence, he was sent to the Mediterranean and the Black Sea, from where he reported on the movements of enemy British, Italian, Greek and French vessels. In 1928, he was given a post as undersecretary for the airbase in Konya. He was awarded a number of medals. One pilot was warmly welcomed into the air force of his nation, while the other was excluded and ignored.

So, what happened to change Turkey from a country where differences were celebrated and accepted to a country where people are holding up NIMBY placards? What happened was that with the establishment of the Turkish Republic it became policy for everyone - Kurd, Turk, Alawi, Georgian, Balkan emigre, Greek or Armenian - to be a Turk. The saying "How happy is he who says he is a Turk" is an expression of this idea. In short, individuality and cultural differences were suppressed, and a national identity was imposed upon all. This national identity has been relaxed in the last 10 years, and with the laws allowing for the speaking and teaching of the Kurdish language, with salaries being given to Alawi dedes and the reconstruction and revitalization of synagogues and churches, steps towards the former multiculturalism have been taken.

However, Turkey still faces an enormous challenge in becoming multicultural, in accepting differences, in celebrating differences. Welcoming the refugees with open arms is a start; however, there need to be efforts from the people, from nongovernmental organizations and from state institutions to implement and facilitate efforts to help the newcomers to integrate while still celebrating their differences.

Here there is a significant opportunity for Turkey not to repeat the mistakes in its own recent past, to avoid the mistakes made in countries like the U.S. and France. New challenges and new opportunities offer a great hope for the future. The new influx of people from a different culture, with a different language offers a new vitality for this constantly growing and developing country.
RELATED TOPICS