The Siege of Kut: An unforgotten Ottoman victory 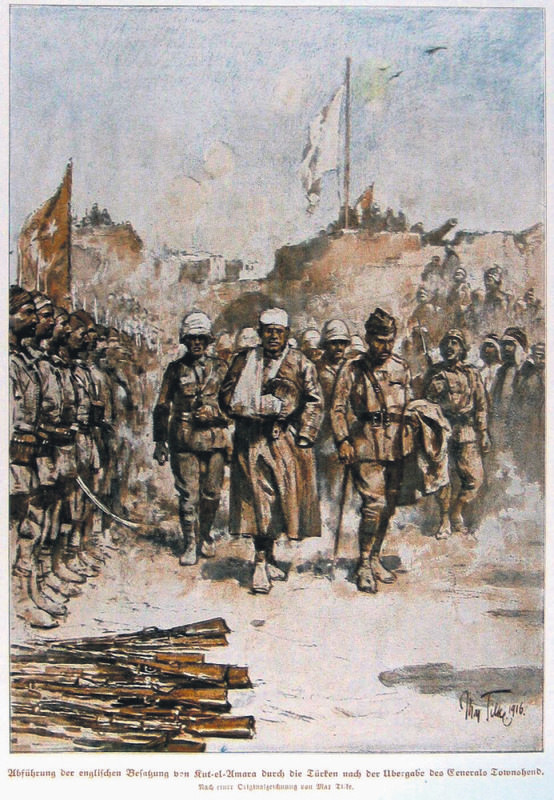 The town of Kut al-Amara in Iraq had been under siege for around five months during World War I. Without sufficient artillery, Ottoman forces encircled the town and besieged the British-Indian garrison. Although it is not very well-known, the siege was the last victory for the Ottoman army, which celebrates its 100th anniversary today

Kut, or Kut al-Amara as it was known until 1939, is a city on the left bank of the Tigris River in Iraq with a population of 375,000. Most people are familiar with this city from the battle that broke out between the British and Ottoman forces during World War I. These battles on the Iraqi front were a source of pride for the Ottomans along with the Battle of Gallipoli, as significant and unique victories were achieved against powerful enemies. On April 29, 1916, a division of 13,000 British-Indian soldiers under the command of General Charles Vere Ferrers Townshend (1861-1924) surrendered to the Ottoman army after a siege that lasted from Dec. 7, 1915 to April 26, 1916. Britain's military campaign in Iraq, also known as the Siege of Kut, which was launched seven months prior to Townshend's surrender, gave them hope after the conquest of Basra. However, Townshend, an experienced commander, was ordered to orchestrate an attack on Baghdad without the necessary military support.

He was hoping to become the conqueror of Baghdad, but he had to retreat to Kut, where there was a guarded fortress, after walking 888 kilometers and being defeated by the Ottoman army under the command of Nureddin in Ctesiphon, a two-day walk to Baghdad on Nov. 25, 1915. He was hoping that reinforcements would reach Kut in three weeks at most. He also made the mistake of not clearing out the some 6,000 Arabs from Kut, as he was obliged to feed them, but these Arabs also spied for the Ottomans.

When it took a long time for the Ottoman forces to take Kut, German Field Marshal Wilhelm Leopold Colmar von der Goltz, the commander of the 6th Division of the Ottoman army, appointed Colonel Halil , the uncle of the then Ottoman Secretary of Defense Enver Pasha, who was acting like a dictator and two years senior his uncle, instead of Nureddin Pasha. To save Kut, British Lieutenant-General Sir Fenton John Aylmer, who was entrenched in Ali Garbi, advanced toward the Ottoman army. Although Aylmer won relatively small victories at first, the advance of the British army on March 9 was rebuffed by Colonel Ali İhsan, who was 10 kilometers from Kut.

Over time, famine broke out in Kut. Approximately eight British and 28 British-Indian soldiers were dying every day. The British-Indian soldiers refused to eat horse meat, but Townshend took permission from priests in India to feed his soldiers with horse meat. Townshend launched an extensive attack to save the city, but this attack was rebuffed on April 22. All hopes for saving the city were shattered. Meanwhile, von der Goltz died in Baghdad of typhus and Halil Bey took over Goltz's duties. Townshend offered 1 million pounds in return for his safe passage to India. When his proposal was denied, he destroyed the arsenal and surrendered to the Ottoman forces with 281 officers and 13,000 soldiers. Townshend was treated respectfully and he began to be referred as the "luxurious prisoner." He was later sent to Istanbul and died in Britain 1924 after entering politics, but with his military reputation under a shadow due to his losses in World War I.

Three consecutive battles took place in Kut al-Amara. The British forces lost 40,000 men including prisoners, while the Ottomans lost 24,000. The British forces, who had only lost 7000 prisoners during the American Revolution some 140 years earlier, took these defeats poorly. After a short while, they occupied Baghdad and Mosul, atoning for the previous losses. The victory at Kut did nothing more than delay the loss of these cities. Nureddin Bey, Ali İhsan Bey and Halil Bey were promoted to general rank after the victory. Since one of the heroes of this victory was Halil Pasha, the uncle of Enver Pasha, and the other two were Nureddin Pasha, who was the governor of Baghdad and Basra at the beginning of the campaign and who ran afoul with the government during the Republican era, and Ali İhsan Pasha, these figures were masterfully erased from the recent history. Only Nureddin Pasha and Ali İhsan Pasha were not reburied in the state cemetery built following the 1980 coup in Turkey.

A war that cost the lives of thousands of people is not anything good. And whether celebrating the anniversary of a war is right or not, it is remarkable to build up the sagas of Gallipoli and Kut al-Amara, although there were numerous incidents and victories that were turning points in the history of Turkish and Islamic history. The Ottoman victory at Kut al-Amara had not been remembered for a long time as the heroes of this victory ran afoul of the new Republican regime. The victories at both Gallipoli and Kut al-Amara, however, resemble scoring two goals in a football match that ends in a horrible defeat, as the goals do not have an effect at the end. The phrase, history is written by the victors, is very famous.

But why is that? Because, these two victories were the only ones for the Committee of Union and Progress (CUP), which came to power in a coup in 1908. This is how modernism colors people's perceptions. Just like establishing a religion by itself and dictating the truth to people, it also writes the history. "New Ottoman" which was recreated in people's minds always belongs to the period after 1908. The period before this can be easily forgotten and people did.

Sakallı Nureddin Pasha (1873-1932), the son of Marshal İbrahim Edhem Pasha, was a tough soldier. He was promoted to general in Iraq and participated in the Ankara movement in July 1920. However, Mustafa Kemal Pasha, the founder of the Republic of Turkey, who was aware of Nureddin Pasha's headstrong personality, did not want to put him inactive duty. As a central commander Nureddin Pasha turned a blind eye to the murder of children, the elderly and women as he was in charge of removing the Greek community in Samsun to inner territories. His actions caused an international problem and the Greeks bombed Samsun as a result. Nureddin Pasha was discharged from duty, but avoided a court martial thanks to Atatürk. He was sent to the western front and agreed to serve under İsmet Pasha, who was his junior. When the Greeks were defeated, he was one of the first people to set foot in freed Smyrna, modern İzmir. Some sources claim that Nureddin Pasha set Smyrna on fire. While he was in İzmit as the commander of the First Army, he ordered a group of soldiers in civilian clothes to execute, journalist and political science professor Ali Kemal Bey, the last Ottoman defense and internal affairs. Nureddin Pasha said he would do the same to the sultan. He drew the dragged Ali Kemal Bey's body along the streets with a rope from his foot and then displayed on a tree located on the route İsmet Pasha was taking while preparing to go to Lausanne. Mustafa Kemal Pasha characterized the killing of Ali Kemal Bey, who could have been labeled a hero if he had been murdered by guerillas in Istanbul as there was no fight, court order or condemned the act. Nureddin Pasha resented that Mustafa Kemal Pasha was promoted to marshal and participated in the opposition. He was elected as an independent deputy from Bursa in 1924, but his election was cancelled as Nureddin Pasha was still an active soldier. He left the army and was re-elected. He objected to reforms that replaced the Ottoman fez and turban with Western hats, arguing that it was against the constitution and human rights. This is why he is applauded as a hero by anti-Kemalist circles. In the Nutuk written by Mustafa Kemal Pasha in 1927, the serious accusations of Nureddin Pasha, who he described as "one of those that had the least right to celebrate the victory."

Halil Bey (1882-1957) was the person who made his nephew, Enver Pasha, join the CUP. Although his military experience was limited to following gangs, he participated in the wars against Italy in Libya. When Halil's nephew became war minister, he was assigned as officer to Iraq. Following the victory against British forces in Iran, he became a general. Later in 1918, he invaded Baku. Following the Istanbul invasion, he was about to be arrested for being a CUP member, but escaped to join the Ankara movement. He continued to arbitrate between Russia and Ankara. When officials in Ankara got suspicious of his relations, he escaped to Germany. After the victory, he returned and did not involve himself in politics in the end.

Ali İhsan Bey (1882-1957) was one of the commissioned officers who toppled Sultan Abdülhamid in 1909. He was based in Çanakkale and the Caucasus and was later assigned to Iraq as a general. As he was a CUP member, Sabis was exiled to Malta. He escaped after a while and joined the Ankara movement. He did not get on well with İsmet İnönü, who was the commander of the Western front and was dismissed and forced to retire. He became an opponent to Atatürk while writing pro-Nazi poems. He was sentenced to 15 years in prison in 1947 for his unsigned letters to statesmen. He was elected to Parliament from the Democrat Party in 1954. His memory is like the antithesis to the Nutuk.
RELATED TOPICS