Oscar Wilde in a parliamentarian debate 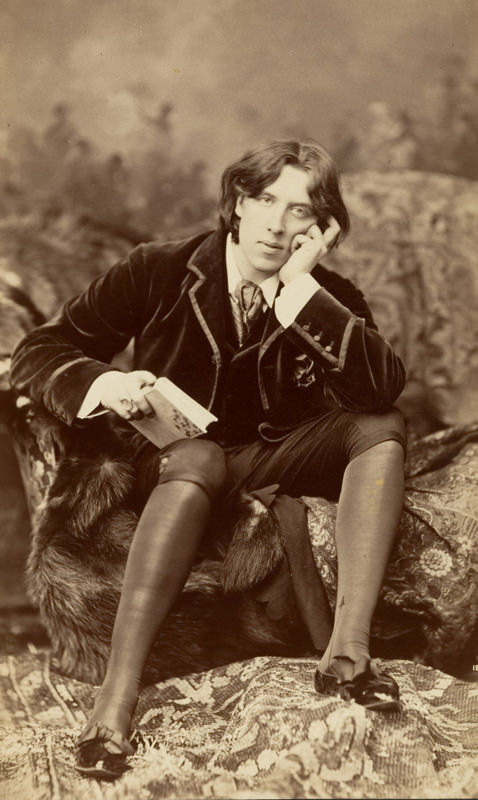 The oddest thing happened the other day. There was a to-do, a furor, a storm in a teacup about a quote from a very quotable British author in a parliamentary committee. The oddest thing was that this found its way into the English-language press

I find it rather odd that a Peoples' Democratic Party (HDP) parliamentarian threw out a quote from Oscar Wilde during a debate in a parliamentarian committee. The committee was debating the lifting of the over-reaching immunities enjoyed by members of parliament at the present time.

Oscar Wilde was never a political commentator. He was a social commentator. Yes, some of his comments did have political overtones, but mostly he was going for the jugular of British society.

There is another odd aspect to this debate. The Irish playwright, author and wit is not someone well-known in Turkey. To quote this man, who although Irish, is quintessentially British, smacks of showing off, and not in a very intelligent way. Indeed, it would have been something that would have greatly displeased Wilde, who abhorred any kind of airs or snobbery.

And how odd that the quote was one that I was unfamiliar with.

And how odd that this incident made it into international papers.

Oscar Wilde (Oscar Fingal O'Flahertie Wills Wilde) as an author and wit, is a very British institution. Although born in Ireland in 1854, Wilde is a person who commented on and recorded the goings on in London society at the end of the century.

After being educated at Oxford, Wilde then joined fashionable London society; it is for this reason that Wilde is more often perceived as British rather than Irish.

Wilde was famous for his "one-liners," his quips and witty comments. I am familiar with many of his more famous quotes. The quote that was so puzzlingly delivered during the debate on lifting the immunities for members of parliament was: "I can oppose vulgar power, but I can't stand vulgar reasoning. There is injustice in vulgar reasoning."

I could not recognize this quote. Well, not until I sat and thought about it. At first, I found it only slightly odd that I had never heard this quote from Oscar Wilde. It is highly possible that I do not know every quip the wit made.

However, what is odder still is that Mithat Sancar, the HDP member of parliament who quoted Wilde, felt the need to preface it. He apologized beforehand - that is he made sure that everyone was going to listen to him, to take notice that he was quoting someone. He stated that he wanted to quote from Oscar Wilde. Then when another person asked who Oscar Wilde was Sancar said there was no time for a lecture, but he would be willing to inform people later.

This all smacks of intellectualism. I am using this term in the sense of "racism," "sexism" and all those other horrid isms.

Sancar could easily have quoted Wilde without even mentioning his name. But rather he said (according to Hürriyet Daily News) "Please nobody take it personally, but I want to quote from Oscar Wilde."

Why should anyone take it personally? It is a quote from a man long dead. Could it perhaps be because Wilde was British? Or perhaps because he was homosexual, and spent time in prison for being a homosexual when being so was still a crime in Britain? In either case, Sancar is assuming too much. The words of a person, whatever their nationality or preferences, are not in and of themselves insulting. He did not say "please do not be offended by the quote I am going to use." He said "Please do not be offended because I want to quote from Oscar Wilde."

Even odder is why should such a simple quote be greeted with such a fanfare?

Even odder yet is that when someone naturally asked who Wilde was, Sancar said that he did not have time to explain, but would be willing to give a private session later....

This is when Halis Dalkılıç, a deputy for the Justice and Development Party (AK Party), replied that Sancar would be better off giving an example from Turkish literature. Naturally. He was talking to a room full of Turks. Oscar Wilde does not feature large on the reading syllabus in Turkey. Perhaps he should. But he doesn't. And particularly he wouldn't have appeared 20 or 30 years ago, when these members of parliament would have been in high school. So perhaps a quote that everyone was familiar with, one which would not "offend" (for whatever strange reason this offense would be taken) would have been appropriate; at least it would have been possible. Not to say that I don't enjoy the odd Oscar Wilde quote; but Wilde was not a political commentator. He was many things, but not that political. Wilde was concerned with culture, with art, with society. Not with lifting immunity from over-immunized members of parliament.

Even odder is the quote. As I said above, it was one that I did not recognize. Now, I am no expert on Wilde, but I do enjoy his zingy one-liners. So imagine my confusion when not only did it ring no bells, but I couldn't find it anywhere on the Internet. The quote is: "I can oppose vulgar power, but I can't stand vulgar reasoning. There is injustice in vulgar reasoning."

Even odder than not being able to find this quote online, this quote makes no sense. Wilde's quotes are pithy and witty because they are to the point. What does it mean that he can oppose vulgar power? How, when, why? Why would he say that? It does not make sense to a "native speaker." And if he can oppose it, how does that connect with his not being able to stand vulgar reasoning?

In fact, this quote does not ring true in any way. The reason, I later realized, is that this quote is the result of a game of Chinese Whispers, or to be blunt about it, poor translation. Obviously Sancar spoke in Turkish. Less obviously, Hürriyet Daily News translated it back into English again. They retranslated a quote, rather than bothering to look up the original quote. All the English media that reported this event used the re-translated quote from Hürriyet Daily News. I wonder what Wilde would say to them? Not only did they not know the quote, they couldn't bring themselves to read Wilde in the original. I hope it wasn't because they were offended.

The original quote is "I can stand brute force, but brute reason is quite unbearable. There is something unfair about its use. It is hitting below the intellect."

There is a world of difference between being able to "stand" something and being able to "oppose" something. Such poor translation skills (or rather, such poor research skills) shed a dim light on Hürriyet Daily News. How much else have they mistranslated (actually quite a bit - as I have pointed out in a few earlier articles).

Now, I would have loved to have been a fly on the wall during this committee. If the quote was as above (but translated into Turkish), then who was using brute reason? And how was it being used?

Wilde originally uses this phrase in The Portrait of Dorian Gray. It is the answer given to a character who says: "I assure you there is no nonsense about the Americans."

There are many Wilde quotes that would have been apt for Sancar to use. Indeed, for anyone to use. How I wish I had been a fly on the wall, and been able to whisper in someone's ear (perhaps Dalkılıç's):

"There is only one thing worse than Injustice, and that is Justice without her sword in her hand. When right is not might, it is evil."

This quote from Wilde is much more pertinent to today than the one Sancar used. In fact, this sentiment pretty well sums up what is going on in Turkey. Justice has to have clout in order to be efficient. People don't like might; they are not always happy with clout. But for justice to prevail, it needs to have force.

If I had been a fly on the wall, I could have whispered the following as well:

"As long as war is regarded as wicked, it will always have its fascination. When it is looked upon as vulgar, it will cease to be popular."

Or, if I was feeling particularly annoyed, I could have whispered the following for Sancar:

Wilde said the following about people who use quotations: "Quotation is a serviceable substitute for wit."

Before ending this quote-fest, I think I would like to add a quote from one of my favorite people to quote. Dorothy Parker. She said:

"If, with the literate, I am

Impelled to try an epigram,

I never seek to take the credit;

We all assume th

at Oscar said it."

No, wait. There is one more quote that really needs to be added to wrap things up. It doesn't seem fair not to end with Oscar himself: "Most people are other people. Their thoughts are someone else's opinions, their lives a mimicry, their passions a quotation." So maybe Sancar was right to apologize before offering up a Wilde quote... He would have been better off saying something original.
Last Update: May 07, 2016 10:31 am
RELATED TOPICS