Syrians in Istanbul: A refugee clinic saving lives for free 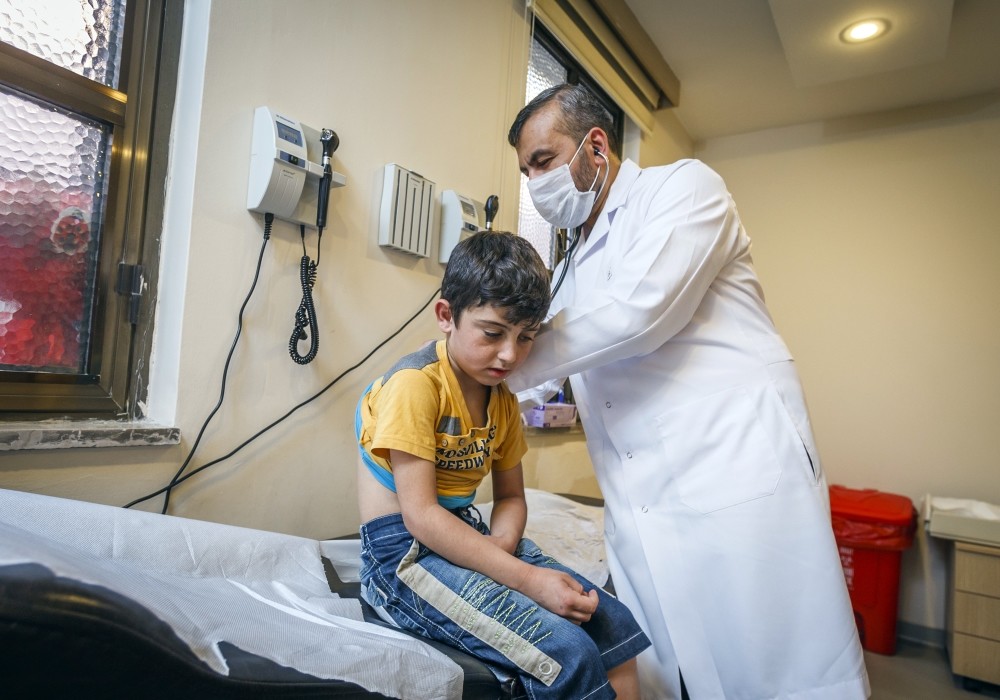 Accessing health services and medication is just another problem that Syrian refugees encounter in Istanbul. A project by Doctors Worldwide, a clinic in the Fatih district, offers free treatment and medication to refugees in the evenings and has Syrian physicians to look after the patients

A seemingly endless queue of patients at a small clinic is not an unfamiliar sight for Istanbul. What is unusual at Bezmialem Hospital's clinic in Fatih, an old historic district, is that the hall is packed with Syrian refugees waiting for physicians who also come from Syria. 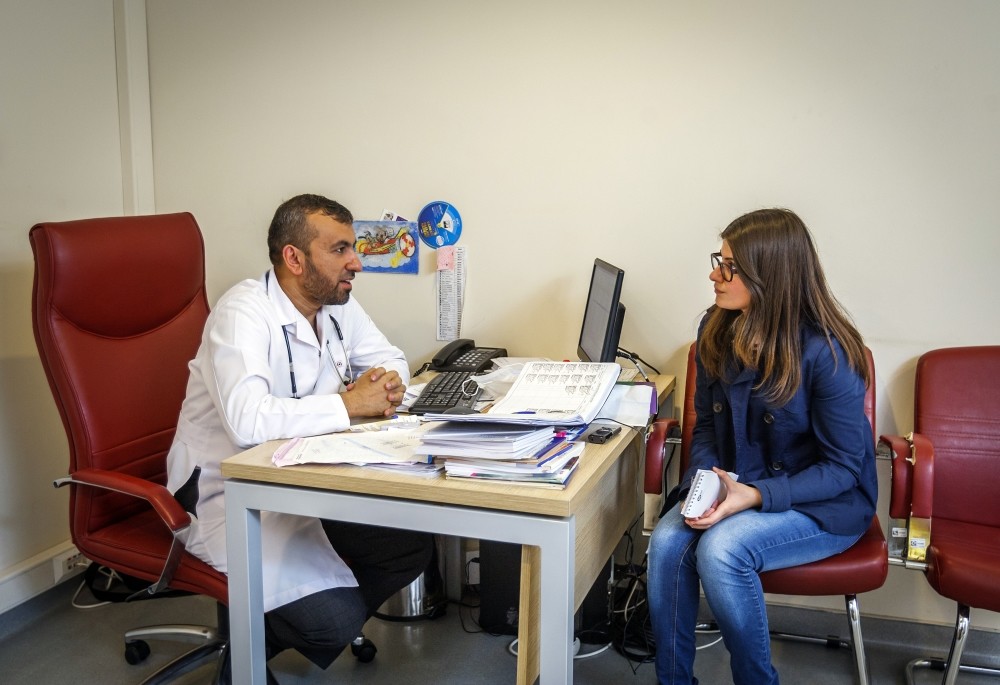 Hundreds of Syrians from Istanbul's different regions visit the clinic for free treatment and medication six days a week, in a project initiated early this year by the nongovernmental organization "Yeryüzü Doktorları" (Doctors Worldwide) and the International Organization for Migration (IOM). A group of volunteer physicians, nearly all of whom fled the brutal war with their families, have been employed to offer primary care to refugees as most of them feel uncomfortable at other hospitals due to the language barrier. With the support of nurses and interpreters, six departments including psychosocial support, gynecology, internal medicine and pediatrics, have treated more than 20,000 refugees so far and TL 250,000 ($83,925) has been spent on medication alone. 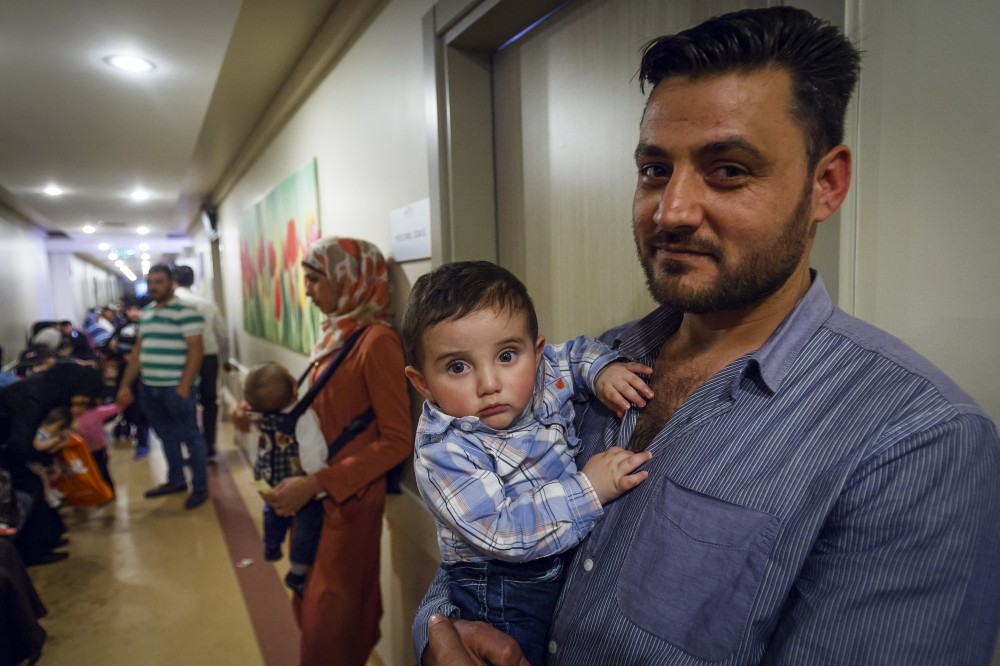 On weekdays, from 5:30 p.m. to 9:30 p.m., the clinic swarms with more than 200 refugee patients of all age groups and the long corridor of the clinic was bursting at the seams the day Daily Sabah paid a visit.

From Syria's Aleppo city, Ahmed Seyhahmed of Doctors Worldwide has been assigned as administrative supervisor for the last couple of months. With his fluent Turkish, Ahmed was constantly running around to manage the patient flow and help out as a medical interpreter whenever the need arose. With his company, we first headed toward the physicians' rooms, each one blocked with a small crowd. 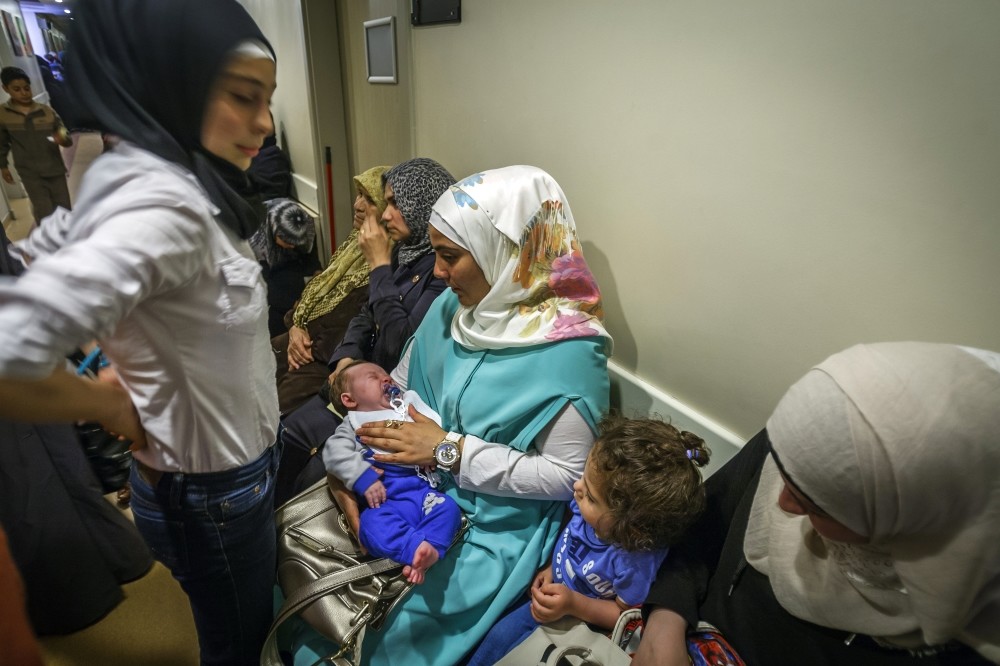 Osama Alabdullah, a Syrian physician, was listening to a young patient's complaints. Mostly treating injuries, chronic pain and other common diseases, Alabdullah told Daily Sabah that they get on well with the patients and have not come up against any significant trouble, leaving aside the clinic's everyday flock.

Our next stop was Algerian psychologist Ibrahim Bouzdani's room with a number of children's drawings hung on the wall. When asked about the drawings' purpose, he said that they sometimes ask children to draw a painting to interpret what they think as their work is a reflection of their inner world. 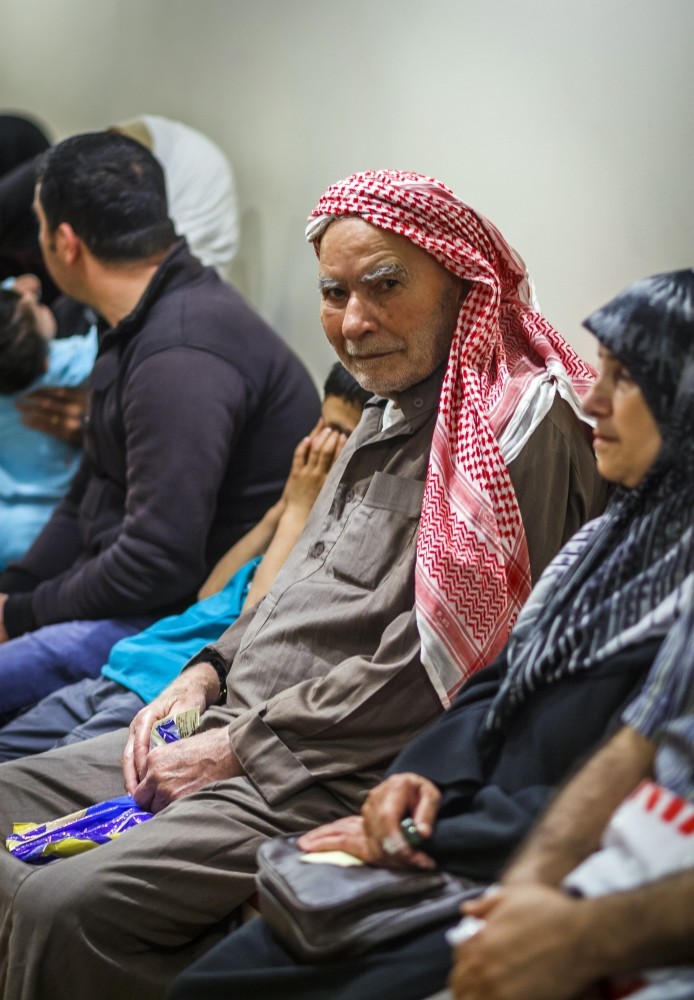 Psychosocial support has been available at the clinic since March and more families knock on Bouzdani's door with different complaints. A large portion of Syrian refugees at camps have found themselves suffering from mental trauma, according to the 2014 study of Disaster and Emergency Management Authority (AFAD). The situation is the same for Istanbul refugees. Bouzdani said that depression, bipolar disorder, mood swings and psychotic disorders are the most common cases while children face retarded speech development.

"Family problems are high among refugees as they are still adapting themselves into new social conditions," Bouzdani said. "In the past, they used to have a male-supported family structure. Now women also have to work, leading to conflicts between couples. They want to divorce and children are stuck in the middle. They are the biggest victims of the war," he said. Recalling that their lives have literally been reduced to "zero" and they have nothing to do but to start anew, Bouzdani explains the main reasons behind why the war has struck them so harshly, pointing to three socially important matters: "Refugees have lost their social status and spiritual and economic support with the war." He further stated that Arab culture is religion-based and suggested weekly spiritual support as a helpful tool. 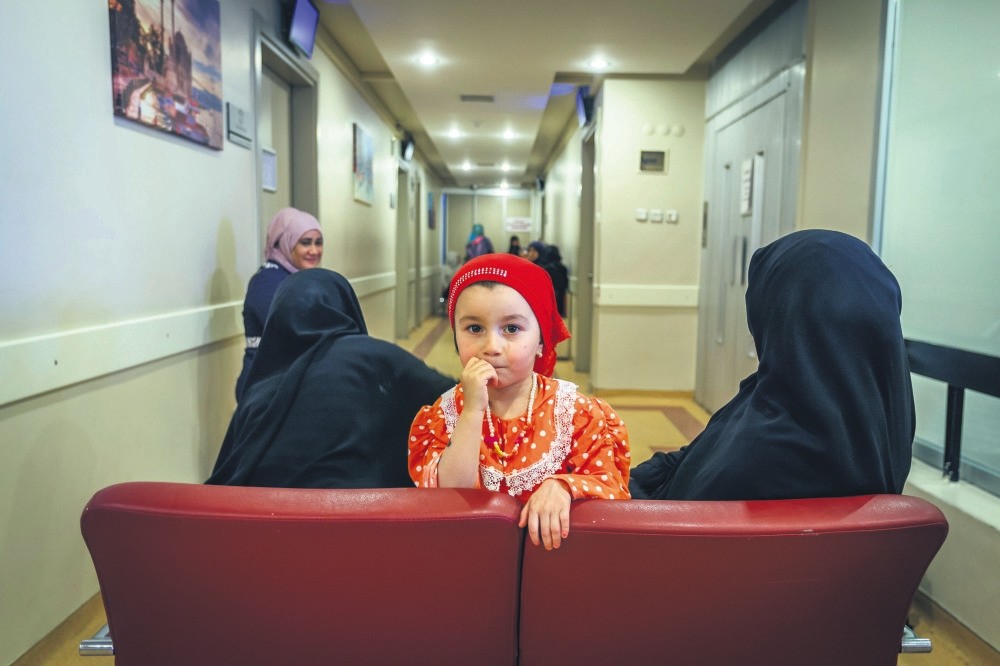 Talking about the feedback they have received so far, Bouzdani said refugees become more relaxed when they see someone from their own background. "Turkish and Arab culture have many similarities, but Syrian physicians know how to deal with them. It is beyond a language problem," he continued. Previously based in Malaysia and coming to Turkey for his doctorate studies, Bouzdani heard about the project through a friend of his and wanted to be a part of it. 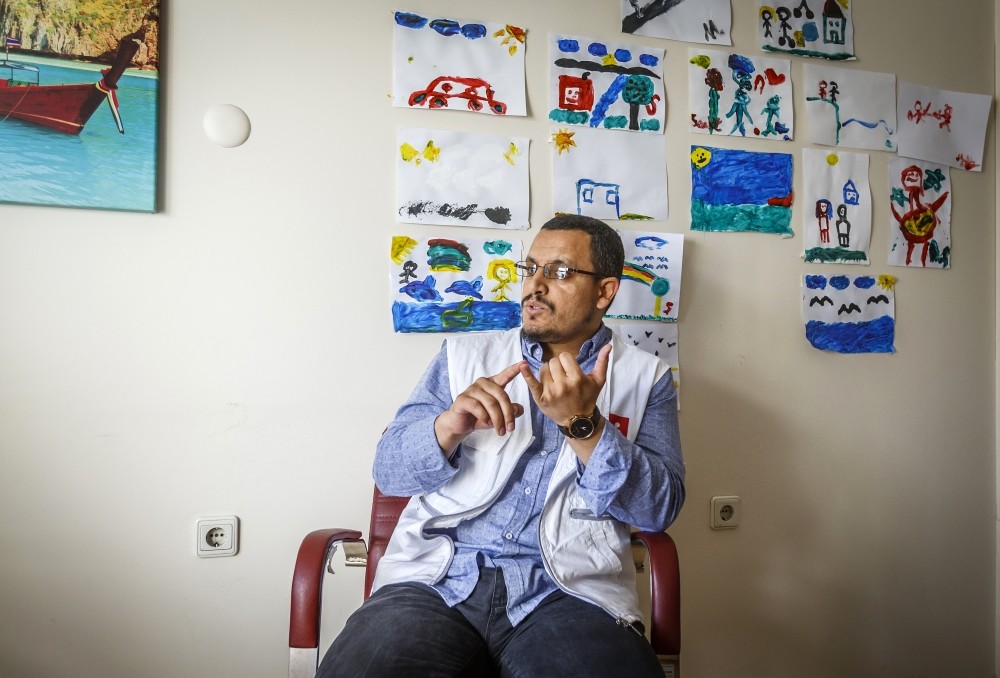 When we were back in the hall, small children were either sitting on their mothers' lap or looking around with curious eyes outside the pediatrician's room in the clinic's busiest department, with gynecology. Zakaria Sallan, 38, was examining Ibrahim, a 9-year-old boy accompanied by his mother and small sister. "Refugees do not want to consult other physicians as they do not speak Turkish. They cannot express themselves clearly and this is why they come to us," he said, as he was busy with Ibrahim's prescription and a list of other child patients, the number of which varies from 20 to 30 every day. Sallan's story is not very different from other refugees. He was based in a Damascus hospital two years ago and escaped to Istanbul with his family after the war broke out. More than 250,000 Syrians have lost their lives in the armed conflict almost in its fifth year now, which first started with anti-government protests. Also, more than 11 million were displaced, according to the U.N. figures. The number of Syrians hosted by Turkey numbers 2.7 million since April 2011 with the country sheltering more refugees than any other in the world, according to the U.N. Refugee Agency. Approximately $10 billion has been spent by the government on the refugees in Turkey. Refugee populations are increasing more rapidly in Turkish cities near the Syrian border and in some cities their numbers have surpassed that of the local population.

Syria has remained locked in a vicious civil war since 2011, when the regime of the country's dictator leader Bashar Assad cracked down on pro-democracy protests with unexpected ferocity. The entire Syrian refugee population in Turkey now outnumbers the individual population of all provinces except Istanbul, Ankara, İzmir and Bursa, as reported by Daily Sabah in a previous article.

Yahyahan Güney, the chairman of Doctors Worldwide, said: "A number of health problems have developed among Syrian refugees with the ongoing war and unfavorable living conditions, leading to unhealthy nutrition. Syrian refugees in Istanbul experience difficulty in accessing health services due to their financial situation and the language barrier. At the clinic, refugees do not encounter these issues. The project has filled an important void."

The center will soon make available feedback cards to provide better health services and better understand patients' needs. Ahmed said that patients requiring further treatment are referred to other hospitals. The Doctors Worldwide initiative at Bezmialem Hospital's clinic will expand in upcoming days as the team is strenuously working to reach more refugees, both in Istanbul and other cities. In the near future, similar health services including psychosocial support and primary care will be offered in Sultangazi and the Basmane district of coastal İzmir province, two other regions with high refugee populations.Before leaving the clinic, I met a Syrian woman named Fouzia. Visiting a gynecologist for an infection, Fouzia said that she is residing in Sultangazi, a rural neighborhood, with her children. "I lost my husband in the war and my children now work to look after our family," she said. Instead of staying in a refugee camp, her family fled to Istanbul two years ago. Fouzia has no clue about her future and merely laughed when asked about whether one day she wants to go back to Syria or not. "Alhamdulillah," she uttered, simply.
Last Update: May 22, 2016 12:30 pm
RELATED TOPICS