Turkey can lead the way

Syrian refugee Rua Sahalli, 12, from Idlib, Syria, weaves a carpet at a workshop inside the u00d6ncu00fcpu0131nar camp at the border crossing with Syria, near the town of Kilis in southeastern Turkey.
by Jane Louise Kandur Jul 16, 2016 12:00 am

An unprecedented reaction against immigration and refugees has broken out in the last few weeks. Following the president's announcement that Syrian refugees would be granted citizenship a wave of biased, bigoted articles and statements have emerged in Turkey. These sentiments, which are totally foreign to Turkish traditions, are irresponsibly being whipped up

In the 1990s, as a new teacher in Turkey I wanted to get to know my students. I asked them, one by one: "Where are you from?" I thought that this would be an easy question for a class of English novices to answer. I had provided them with the example answer: "I am from England. I am from London" and eagerly waited to hear my students chirp obediently: "I am from Istanbul."

However, I was to be surprised. Not one student answered that they were from Istanbul. One after another they said: "I am from Samsun," "I am from Erzincan" and "I am from Trabzon." After about 10 students answered I had to ask: "Do you all live in dormitories? Who are you staying with?" They looked at me blankly. Unfortunately, they did not have the English and I did not have the Turkish to get to the bottom of this conundrum. 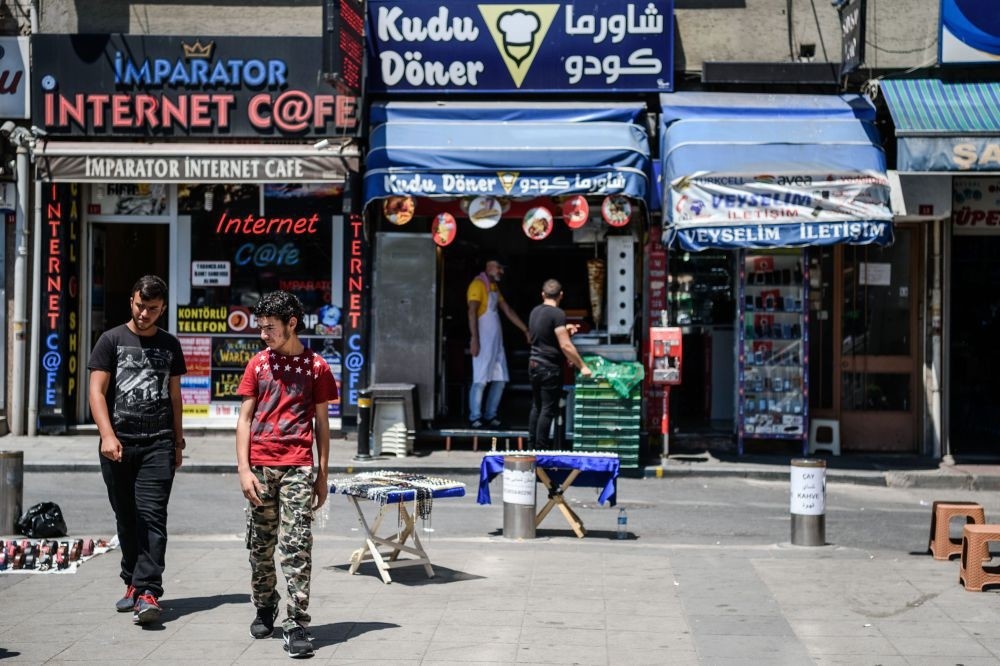 For quite a few weeks, even months, I worried that these girls were so far from home. They were only 14 and surely missed their families. And then slowly I began to learn the truth. When they said they were from Trabzon, Samsun or Erzincan they meant that their families came from the region in question. Much like Midwestern Americans introduce themselves by saying they are German or Polish or Irish, these girls were referring to the areas where their families had originally come from.

This form of identity still seems odd to me. Perhaps Turks say they came from a city they had never seen as a reaction to decades of repression and of being forced to be a "Turk" and nothing else. For decades, chanting: "How happy is he who says he is a Turk," every morning at school must have had an effect. Perhaps identifying with a region in Turkey was a reaction against the denial of that your family came from Georgia, Bosnia or Greece. That perhaps they are actually Kurdish, Arab or something else. 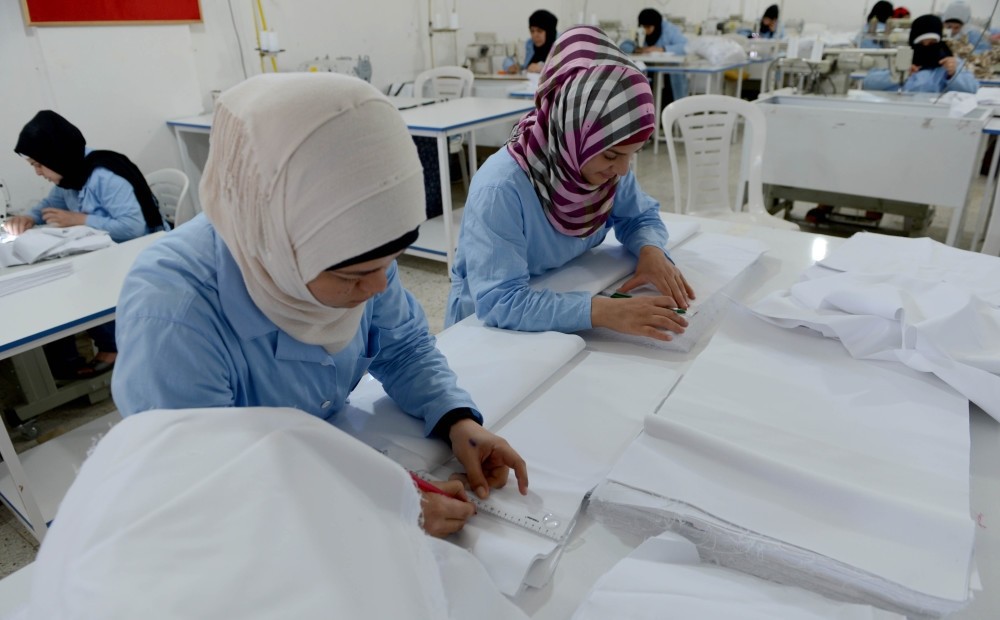 Syrian women working at a manufacturing workshop in Kilis.

If this identity search were limited to determining where one's ancestors came from, like that of Americans, that would be fine. But rather it has become a form of micro-nationalism, as people from Sinop or any other area form a "dernek," or association and help each other find jobs. People from one region quite often will only marry people from the same region. People from the same region tend to trust one another more than they would a stranger. One acquaintance once told me how great a culture clash there was in her marriage, as she was from the Black Sea and her husband was from the southeast - and there I was thinking Turkey and the U.K. was a great culture clash.

The regional identity, this micro-nationalism, is reflected on Turkish identity cards. Today, these regions are still written on identity cards, giving an individual a regional belonging. However, in recent years, rather than identifying with the city in which their father's birth was recorded, often a city they have never seen, most people will say that their parents or grandparents came from X city, but that they were born in Istanbul. That is, there is a slow change in regional identity; change bodes hope, change can be good.

That is, micro-nationalism is becoming a thing of the past. Today, younger Turks tend to identify themselves as Turkish citizens, or citizens of the Republic of Turkey, that is, they recognize themselves as being from a number of different cities, regions and countries. Identification with only one region, one type of person is becoming passe in Turkey.

Or at least it was. Unfortunately, this micro-nationalist approach has taken on a new form in the last few weeks. With the president's announcement that Syrians would be granted citizenship a wave of biased, bigoted articles and statements have emerged. Negative, destructive sentiments are being whipped up by the media.

Opposition leaders have clamored for a referendum on whether or not we will grant citizenship to Syrians. Someone probably whispered in a few ears; one leader has now backtracked, saying: "I didn't mean to suggest that a vote on whether immigrants are allowed to stay in the country should be held. That would be racist." Darn right that would be racist. A referendum to leave an organization, for example Brexit is one thing. A referendum to decide whether or not a certain group should be allowed to join "our club" is totally different and totally repugnant.

Many Turks have said that they do not want Syrians to be given citizenship. They say: "There are Turkish citizens who are homeless, who are working at the minimum wage." "Why should we give them citizenship? They have done nothing to earn it." "Turkish citizenship is not something that we should just hand out, willy nilly."

What must be reiterated, what must be driven home, is that immigration is a positive trend. Including new people into a nation can only help it grow. This is something that has happened over and over again in this geography. For centuries these lands have accepted refugees - from the Balkans, from the Central Asian Turkic republics, from Spain, and from Germany. The refugees were quickly embraced by the Ottoman Empire and became subjects. This is the local tradition.

Despite all the hype in the media, citizenship will not just be handed out to anyone who wants it. As we said last week, there are certain criteria to be met. Those refugees who have a profession, those who have savings, those who have no criminal record, and those who already have relatives who are Turkish citizens will be given priority. Those who do not qualify will be given residency, but not citizenship.

That is, the new citizens will be a benefit to the society. Not only will they bring professional skills with them, they will also be consumers, end users. That immigration helps support economic growth is something that has been established by a number of academic studies. Nearly 50 percent of growth in workforce in the U.S. has been supplied by immigrants, while in Europe this ratio is closer to 70 percent. The immigrants make an important contribution to the target country in that with their arrival a flexibility in the labor market occurs, and economic growth is sustained; it has been established in a number of studies that immigrants contribute more in taxes than they receive in benefits. In addition, the newcomers clearly bring a new energy and a new perspective, leading to innovation and cultural diversity.

Many would argue that while the above is true, this does not mean that Turkey has to extend citizenship to the Syrians. Let the refugees stay here, they would argue, let them have jobs and education. But don't give them citizenship.

Without the offer of citizenship, the lives of the Syrians are uncertain and lacking in any real quality. A Syrian friend told me that they no longer wanted to be considered as a refugee. "I am a professional. I have skills. I have things to contribute. But when I am called a refugee, my dignity, my education, my skills are all overlooked. I become just a problem to be solved." Without allowing them the dignity of choosing to belong or to not belong the Syrians are made to feel unwanted, unappreciated. To have nearly 3 million people living in a country and feeling unappreciated, unwanted can only bode ill for the future of Turkey. To understand this, one need only examine how the Turks in Germany felt for decades. Or look at the Black Lives Matter movement, and the recent unrest in the U.S.

What is happening today in Turkey is a worrying trend. It seems that once again, as in so many issues, the people are being encouraged to forget their own traditions and to embrace a more Western approach. To adopt a Western approach can be positive; however, in this issue, it would be better for Turkey not to learn from America or Europe.

The issue of racism in America has exploded in the past week. The shooting of police officers in Dallas and the subsequent unrest in a number of cities is the direct result of racist attitudes from some individual law enforcement officers. There has been a great deal written about the systemic racism that exists in the United States, and all of this has come to a head in recent weeks.

In a survey from Pew Research Center released on the 11 of this month, the attitude of Europeans to refugees is laid bare. We know now that the U.K. has serious issues with immigration, so serious that they have said au revoir to Europe. The prospect of more refugees coming to Europe has been used by right-wing parties to drum up support, and featured prominently in the Brexit campaigns.

The Pew study states that many Europeans are worried that the refugees will be an economic burden; many respondents stated that they feared the refugees will take away their jobs and be a burden on the social state. Only Sweden and Germany - home to nearly 3 million Turks - have said that refugees will make their nation stronger because of the skills they will bring. That is, a country which has taken in 3 million immigrants, now appreciates that which immigrants have brought to the table. The number of possible new citizens in Turkey has been put at 300,000, one-tenth the number in Germany.