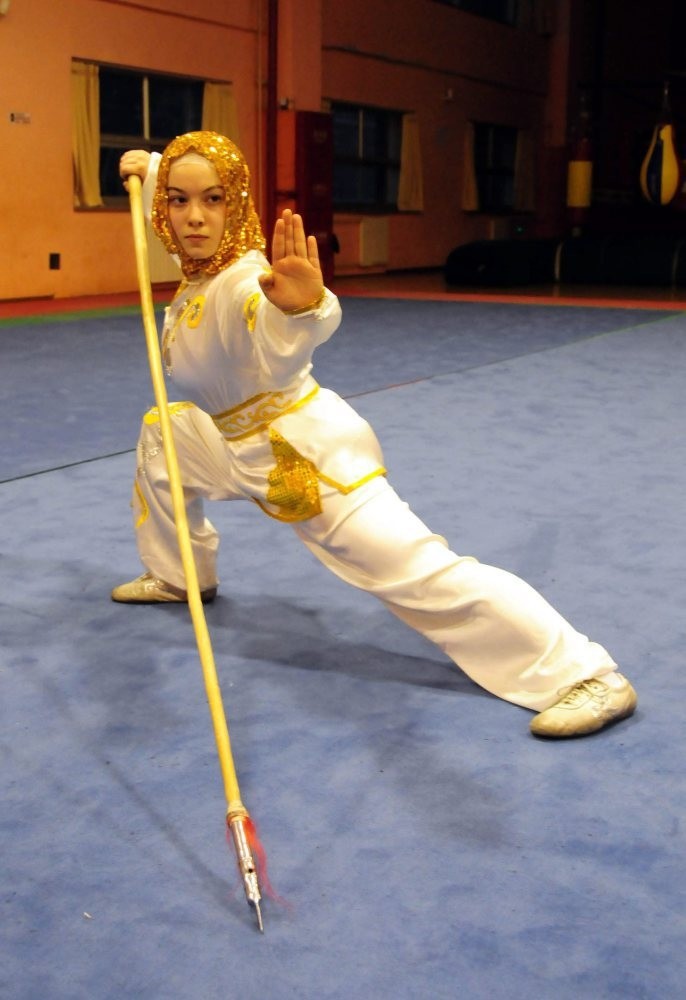 A form of Chinese martial arts that blends eye-catching performance with full-contact sports, wushu is a way of life for one Turkish family. Elif Akyüz, a young Turkish woman and multiple world champion, inherited a passion for this unique sport from her father and is preparing once again to represent Turkey with pride

Wushu is a fluid sport that combines flexibility and strength with speed and flawless technique. Standard wushu training concentrates on a core curriculum of eight major styles; whereas modern wushu consists of a variety of styles which can be divided into barehand style and weapon play. Weapons are grouped into long and short range, flexible and doubled weapons. Wushu became an international sport in 1991 through the International Wushu Federation (IWUF) with championships being held every two years in Beijing. Akyüz, 19, who is currently training for the upcoming Wushu Championship to be hosted in Sakarya, aspires to add another medal to her long list of achievements.So far, Akyüz has won three world championships, one each in 2011, 2012 and 2014. Competing since the age of five, the vibrant young Turkish champion is nothing short of a work of art, as she confidently yet fiercely exhibits her carefully selected moves on the blue mat. She discussed her journey from kung fu to wushu with Daily Sabah, as well as her future aspirations.

Daily Sabah: Where did your interest in wushu derive from?

Elif Akyüz: Growing up, I was always surrounded by kung fu and wushu, stemming from my father's passion for the sport. At a young age, my father would watch Jet Li and similar talented sportsmen, and began practicing taekwondo to emulate them. Kung Fu is not a well-known art here in Turkey. My father met the first Turkish kung fu champion, Yilmaz Aydın, who later became his instructor. It was through him that he was introduced to kung fu, leading him to open an academy for kung fu instruction here in Turkey. Along the way, my mother joined his classes with her brother, which is where they met, and that's where my journey with wushu began. I was always with my parents on the mats observing and growing into the sport. At the age of five I started competing but it wasn't until the year 2009, when I was 12 years old and my father took us to China for a month, that the sport became a significant part of my identity. While acquiring new skills in China, one of the instructors advised my parents that my younger sister, Zeynep, had a natural inclination and believed she could become a world champion. From there our training got more serious and more intense. By 2010, I had made it to the European Championships and have been constantly competing since. In the meantime, we are balancing school and constantly going back and forth to China where we acquire new skills and learn the language. The Turkish Wushu Federation also brings instructors from China to assist in our advancement.

DS: What are some of the challenges in being a Turkish Muslim woman competing in a sport like kung fu and wushu?

EA: My parents are exceptionally supportive and often paved the way for us. I personally have not faced any challenges as such but my sister Zeynep did experience an unfortunate episode while competing in the 2012 European championships. She got a very high score and was expected to win but the Russian umpire refused her score because she is covered. His reasoning was that her hijab was not part of uniform -- when we know there is no such ruling. It was blatant discrimination and we certainly refuted the call but unfortunately nothing came of it. We no longer compete in the European championships. My hijab is a testament to my faith, a choice that I make, and I am in no way hindered or should not be hindered by this when it comes to pursuing my dream. I encourage all women to stand for their rights and peruse their dreams. We cannot achieve anything by being sitting at home and being afraid.

DS: How has wushu influenced your life?

I am sure I do not need to go into the benefits of sport. Any sport, because it is undeniably beneficial to everyone at every age. We are unable to attend regular schooling because of our commitment to wushu and the intense training that is required from us. We generally attend one month out of three when it comes to school. But sport teaches you discipline. It has a positive influence on your body and mind. While other students got to school for 3 months, we go for a month and are able to cover the same content as them and sit the exams with them at the same time. Wushu brings balance and peace into my life. It helps me mentally, physically and spiritually. I just finished high school and am moving to China to study medicine. This way I can continue with my studies at university and pursue my passion for wushu in the country it originated from.
RELATED TOPICS