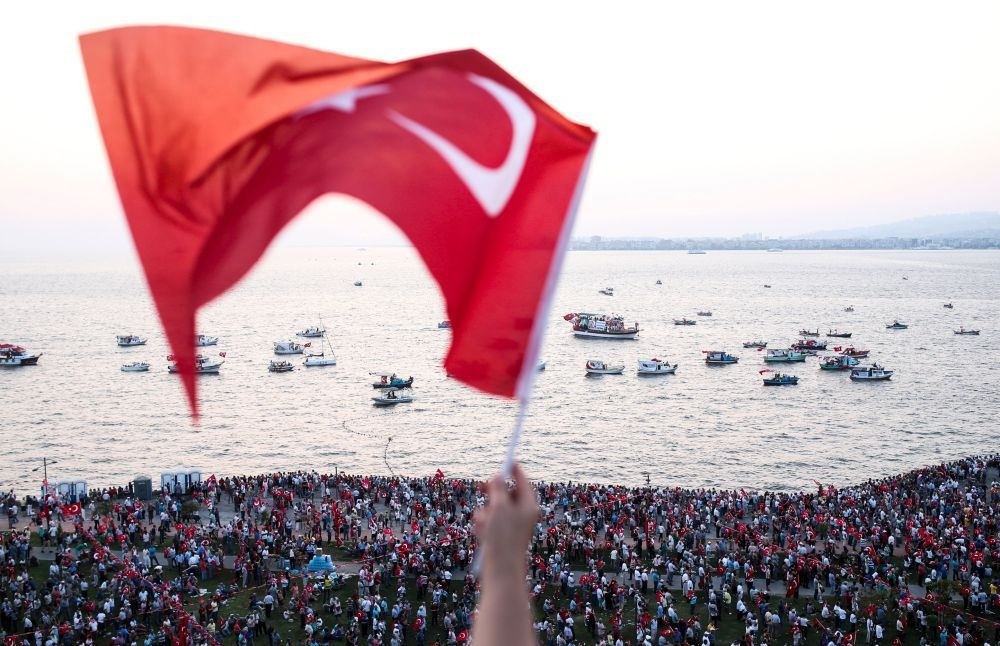 In June 2015, Morsi was handed a death sentence. At that time, I wrote an article, ‘A History of Injustice.' In it, the coups that unseated a number of democratically elected leaders, leading to their deaths, were examined. A year and one month later, that article has taken on a whole new meaning

In June 2015 the following sentences were written here: "The lack of outcry by the Western world when Morsi was so summarily deposed, with the Americans shaking their heads and saying 'tsk tsk' to what was clearly a coup d'etat, and the lack of foreign indignation or anger at Morsi's being sentenced to death....this is nothing new. But that does not mean it should not shock us."

Three weeks earlier a coup attempt in Turkey was thwarted, defeated, denied by the people of Turkey. The people turned out in their thousands, pushing back tanks, throwing stones at helicopters and hurling bricks at F-16s. Google's most searched term on the night of July 15 in Turkey was "How to stop a tank." And stop the tanks they did.

But, as with Morsi, as with Bhutto, as with Allende, the milquetoast reaction of the U.S. to the coup attempt in Turkey is significant. In fact, labeling the coup as a "failed coup" almost implies a sadness... a sigh by the West, "if only the coup had succeeded."

The Turkish public is not stupid. They came to the conclusion that the West is not over the moon that the coup "failed" or was "bungled" all by themselves. They read the news, they saw the comments. They understood that while some media outlets were showing where the president's jet was flying, others were simultaneously stating that he had fled to Germany or Britain, in a vain attempt to destroy Turkey's confidence in their leader.

Indeed, if we quote our article from last year, or rather, if we re-quote Ramsey Clark, a former U.S. Attorney General: "Is it possible that a rational military leader...could have overthrown a constitutional government, without at least the tacit approval of the United States?" This is the question Turks have been asking themselves.

Turkish elections have always been fair. But for some reason the West cannot fathom, Erdoğan and AK Party just keep winning. Unfortunately, the only conclusion, they seem to think, is that the Turkish people are stupid.

Just for argument's sake, let's say they are stupid - Turks are far from being stupid, but just for argument's sake, let the West have its thesis confirmed. The Turks vote in exchange for a packet of dry pasta (not even fresh pasta, horrors!), or for some immediate gratification, having no idea about what democracy is all about. They actually cannot understand the great responsibility that comes with the vote.

Such an idea is rubbish. Utter rubbish. If this were the case, there would not have been an 85 percent turnout for past elections. Few other countries can boast such a high turnout. The Turks treasure their democracy. And they showed just how much on July 15.

Democracy is not a club that is open only to certain people with certain educational backgrounds. Democracy is open to all. And as we have seen recently, even if a large percentage of the population is not happy with the results of a vote, whoever gets the largest slice of the pie wins.

The West can sit and scratch their heads and worry about Turkey. They can watch with concern as academics are suspended from their jobs. While wringing their hands in concern, what commentators forget to mention is that suspended academics are receiving two-thirds of their normal pay. Oh, and the fact that most academics support this action is also never mentioned. For further details on this matter, please see: https://www.timeshighereducation.com/blog/turkey-purge-why-government-clamping-down-universities

Now there really is head scratching - why would academics support such a clamp down? The reason is simple; it was the honest academics with integrity who suffered most in previous coups. Hundreds were fired from their jobs while others were put in prison because of what they had written or said. In post-coup periods, academic freedom was essentially non-existent.

Academia, if open to abuse, can be a weapon wielded against democracy. It can be used to make the most undemocratic action - for instance, say a coup - appear justified and necessary. On the reverse side of the coin, academia can make a fight against a terrorist organization - be it DAESH or PKK - seem totally unjustified. What the West has forgotten or overlooked is that academia in Turkey has only recently started to resemble academia in other countries. Academia in Turkey for many years was crippled and not independent. Now is the time to make it healthy and truly independent.

Turkey today is still not a fully-fledged democracy. No one has ever claimed that it is. Turkey is a country that is working toward full democracy. It is a country that has suffered one military coup after another. The constitution that is in place was introduced by a military junta. The last coup, the post-modern coup, was not a full military coup, but it took its toll on the country and gave a boost to the already powerful military.

Turkey, like so many Eastern countries, was a country in which the military could stretch its tendrils throughout the system. In schools, in universities, everywhere, the military had a presence. It was not always obvious, but it was there. Aug. 30 parades which trundle down Vatan Avenue have not been that different from Communist May Day parades in Red Square. They cannot be compared to the Queen's parades, with gold coaches and beautiful black horses prancing down the street. Nor can they be compared to a ticker-tape parade, with people cheering and soldiers kissing random girls. Aug. 30 parades were ominous, with tanks and soldiers rumbling down one of the main thoroughfares of Istanbul. The message was clear. Real power lies with the military and the military is omnipresent.

How poetic that the people, armed only with a desire for democracy, stopped tanks from rumbling down Vatan Avenue on July 15. And how poetic that the Turkish government has decided to cancel Aug. 30 parade this year (and I hope in years to come).

That is not to say that there were not military heroes on July 15; there were very many military men and women who stood up to the coup plotters. Many lost their lives, sacrificing themselves for Turkey's democracy. There are many in the military who are concerned with doing the job they are supposed to do; protect the people against outside threats. But those who are not committed in this way must be removed. It is time that the military in Turkey is relegated to the place that the military should occupy in a democracy.

Yet, the bringing of the military under civil authority is perceived with horror from abroad. An elected government will now have authority over the military! Military high schools, where prepubescent children are taught to kill people, are being shut down! They are being transformed into universities. Military hospitals, where only soldiers were treated, are being transformed into hospitals for the people! That is, the best medical care, formerly reserved for the military, can now be given to the people. How ridiculous these concerns sound when put like this; yet this is essentially what Western media outlets are saying.

To ensure that there will never be another coup in Turkey there is a need to reorganize academia, the judiciary, the police and the military.

These reorganizations of institutions, the removal of "cancerous" elements, is actually supported by a large percentage of the Turkish people. Indeed, many of Erdoğan's opponents - Kurds, secularists and nationalists - earlier expressed concern about the influence of Gülenists inside the state; not only do they believe that Gülen was behind the coup, they are also convinced of the need to remove his associates from positions of power.

There is concern that other schools and universities have been closed down; all the institutions that have been closed down are ones that provided funding to the Gülen terrorist movement. Surely part of fighting any terrorist organization is drying up its funding, be it from drugs, contraband or education. The Gülenists use all their connections to fund their activities; it is for this reason that anything that is in any way connected with them has been taken over by the state. These institutions will be put to the use of the people.

To quote last year's article and Ramsey Clark again: "The new evil empires, terrorism, Islam, barely surviving socialist and would-be socialist states, economic competitors, uncooperative leaders of defenseless nations, and most of all the masses of impoverished people, overwhelmingly people of color, are the inspiration for new campaigns by the U.S. government...shoot first and ask questions later, to exploit, to demonize and destroy." Once again, I have to say that this paragraph, although written in 1998, echoes our world today perfectly; from Black Lives Matter, to the coups in Egypt, Brazil and Turkey, from Syria and Iraq to DAESH.

It is time a new perspective was gained. Rather than seeing Turkey as the sick man of Europe, or a country on a downward spiral, the West needs to see it as Turks see it. They need to see Turkey as many in the East and Muslim world see it. Turkey is a country that is ridding itself of the shackles from the past; Turkey is once again ready to stand proud and tall. Only by freeing herself from the corruption, the vested interests and the tutelage held over her head by the military, the bureaucracy and the judiciary, by removing the cancer of Gülenists, can Turkey become the country her people want her to become.

On July 15 the Turkish people united to defeat an evil plot against democracy. This was not the first time they have had to do so; let's hope it is the last. But let this be known. If necessary, they can do it again and again.
RELATED TOPICS