Syria: From the dawn of civilization to chaos of war 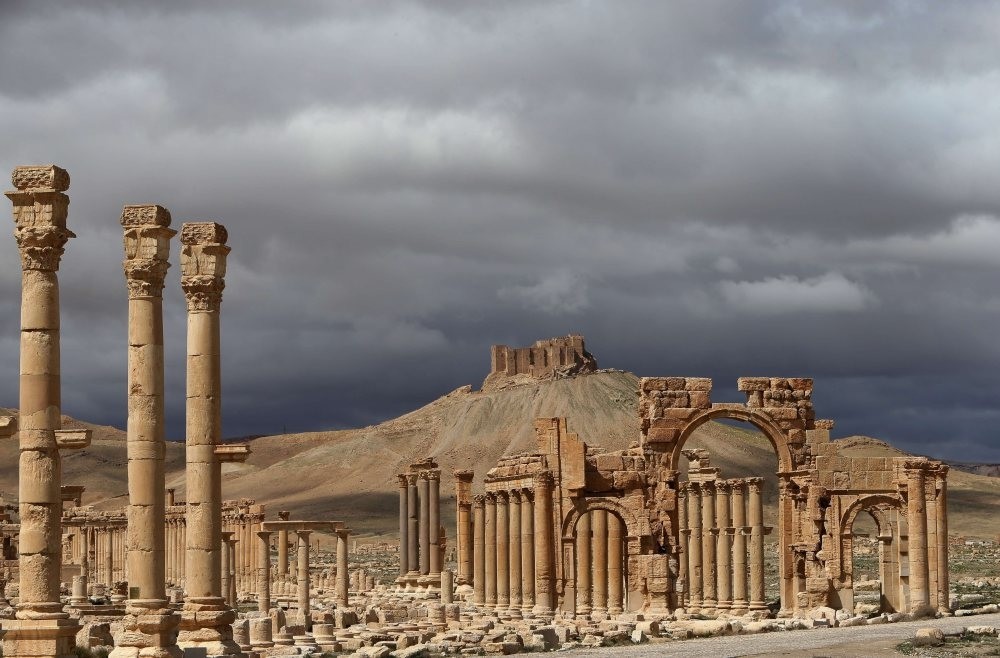 In ancient times, Syria was a land of trade, culture and flourishing civilizations. Throughout the centuries, the area was under the rule of different powers from Romans to Seljuks, being home to numerous world heritage sites. This sacred land is now witnessing this century's worst conflict

Syria has always been a center of attraction since ancient times, although it lacks water, fertile lands and oil reserves. The country is the cradle of high civilizations, as Damascus became a major city of one of the world's biggest and wealthiest empires - the Roman Empire. Against the Romans, who believed that Muslims had no idea about art and civilization, the Umayyad, Caliph al-Walid I, had the artists he brought from Byzantine-ruled Constantinople build the Umayyad Mosque that is still standing today and impresses all.

The Quranic verse, which can be translated as "We blessed the surroundings of Al-Aqsa Mosque," praises the Syrian city of Damascus, without mentioning its name. The Prophet Muhammad prayed by saying "May Allah bless our Damascus," and said "Jesus Christ will go down to Damascus just before the apocalypse." Damascus used to be a nice city with beautiful water and air, as well as great people and rich resources. It is one of the Muslim countries where religious sciences were taught in the most traditional way. Ottomans called Damascus "Şam-ı Şerif" (Holy Damascus), it was the second most glorious city after Jerusalem. Although the Syrian regime is distant to the Ankara government, perhaps there is no other Arab nation that is as close to the Turks as the Syrian nation.

Following the fall of the Arab Empire, the Syrians lived under the rule of Turks. After the Seljuks, the Zengid dynasty, the Ayyubid dynasty and the Mamluks, the Syrian lands were conquered by Ottoman Sultan Selim I in 1516. During the Ottoman period, Damascus was the center of the Syrian state, which included the lands of Lebanon and Jordan. Aleppo was a separate state and the provinces of Gaziantep, Kahramanmaraş and Şanlıurfa, which are now a part of modern Turkey, were joined with Aleppo. Today, the identification documents of the grandfathers to the residents of these provinces site their birthplace as Syria.Jarablus, Manbij and Raqqa, where Turkey has recently launched a military offensive to secure its borders, used to be densely populated by nomad Turkmens. They used to spend the winter in this territory and when the spring came, they dismantled their tents and took their cattle, horses and camels and migrated to central Anatolia. The ancestors of most Turkmens who embraced a settled life in Anatolia lived as nomads two centuries ago.

Back in Ottoman times, Damascus and Aleppo were significant commercial hubs. These provinces became rich by selling products to people of different faith backgrounds. The cotton fabrics, olive oil, and soap of Aleppo alongside the fabric and sweets of Damascus were very famous. The governor of Damascus was also Emir of the Hajj and organized the pilgrimage of the Muslims to Mecca and Medina.

Djemal Pasha, one of the main leaders of the Young Turk movement that seized power of the Ottoman state in 1908, was the last governor of Syria. The strict Turkification policies by the Young Turks made the Arabs enemies and fueled the Arab nationalist movements. Djemal Pasha condemned many people to death on the grounds of Arab nationalism, regardless of whether they were innocent or not and was named "al-Saffah" (Sanguinary). The most crowded avenue of Damascus was called "Jamal Pasha al-Saffah" reminding the Syrians of the cruelty of the Young Turks.

These injustices caused the end of Ottoman rule in Syria. The Arab Revolution was born in the lands of Syria and as the Middle East was shared out following World War I, France laid claims on Syrian lands. An autonomous government composed of people educated in the Ottoman schools was founded. Ahmah Namy Bey, one of the sons-in-law of Ottoman Sultan Abdülhamid, served as the president of Syria for 10 years.

France withdrew from the region after World War II. Syria experienced a period of social and economic revival that had been dreamed of for many years. But when allied Arab forces were defeated by Israel in 1948, the political stability of Syria broke down and Arab nationalism gained strength. Military officers trained in the military academy that the French opened in 1920 orchestrated consecutive coups. In 1958, Syria agreed with Egypt to form the United Arab Republic, a short-lived union. On the other hand, it became a part of the Warsaw Pact by getting close to Russia. Apart from a few, Russia made almost all Middle Eastern countries prosper and Arab Socialist Baath Party came to power in Syria in 1963.

When the Egyptian dictator Gamal Abdel Nasser died in 1970, pilot Hafez al-Assad from the Arab Socialist Ba'ath Party orchestrated a coup and began to rule Syria with an iron fist. Following the defeats in battle in 1967 and 1973, the Golan Heights, which have rich water sources, were seized by Israel. Infuriated by this, al-Assad occupied Lebanon, but the Syrian army was forced to withdraw a few years ago due to American pressure. The name "Hâfez al-Assad" means "lion keeper." Hafez al-Assad was a village boy from Antakya, a part of modern Turkey since 1939. He was a Nusayri, however, and the Syrian constitution states that the Syrian president should be a Sunni Arab. Syria, which had a population of 13 million, had a 10 percent Nusayri population and another 10 percent was Christian. Also named as "Arab Alevis," Nusayrism is a sect of Shite Islam. As the Nusayri were poor, they encouraged their children to receive education and become teachers and military officers, eventually managing to seize power. Syria was home to Christians belonging to almost every sect of Christianity. The rest of the population was Sunni Muslims. There were few Turkish decedents and most Turkish decedents lived in northern Syria, near the Turkish border. This area was also populated with a 6 percent Kurdish population.

Syrian opponents rebelled against the Baath Party under the leadership of the Society of the Muslim Brothers (Jam'iyat al-Ikhwan al-Muslimin) in 1982. The uprising was brutally repressed by al-Assad's cruel brother, General Rifaat al-Assad. The country was bombed from air and land and tens of thousands of people were killed. Anyone presumed to have contacts with the opponents was either killed or had to flee the country.

After the Soviet Union was dissolved in 1990, its presence in Syria was taken over by the France - Germany block. Hafez al-Assad assumed a softer and more liberal policy. When he passed away, his son oculist Bashar Assad, who was educated in the U.K., took over the presidency. Nevertheless, Syria did not give up its foreign policy.

Iran supports the Syrian government, as the two belong to affinitive sects of Islam. Moreover, Iran has taken Hezbollah in Lebanon and Hamas in Palestine under its control. Since the southern part of Iraq belongs to the Shiites, they managed to reach the Mediterranean, and Iranian control over a vast land, from Iran to Morocco, frightens both the Sunni Muslims and the world.

Syria, where the Arab Spring did not blossom, does not resemble other Arab countries where dictators were easily overthrown. The regime is in the hands of a single sect that has a great power. Hence, a solution that includes al-Assad is to be sought for Syria's future.