A day at the horses with Syrian children

Last Wednesday I had the opportunity once again to spend some time with a number of Syrian children. This time the activity was horseback riding, one of my favorite sports. But watching Syrian children get on horses for the first time was beyond any other riding experience I have had

Watching a child do something for the first time is always fascinating. There is one part that wants to just sit back and admire the learning process. Then there is the other part that wants to help out, to make it easier for them, to push them through the process.

The other day 80 children from Syria, refugees, visitors, call them what you will, came to a place called At Evi. At Evi is a stable in the village of Sırapınar, Çekmeköy. This "village" is actually still in the Istanbul metropol area; yet, it is an authentic village, with a small mosque, dogs lying in the street, one or two grocers, a tea house. That is about all that is there.

Obviously some of the children had come from villages in Syria. Others had come from cities, but had visited villages. This would not have been the first village they had ever seen. 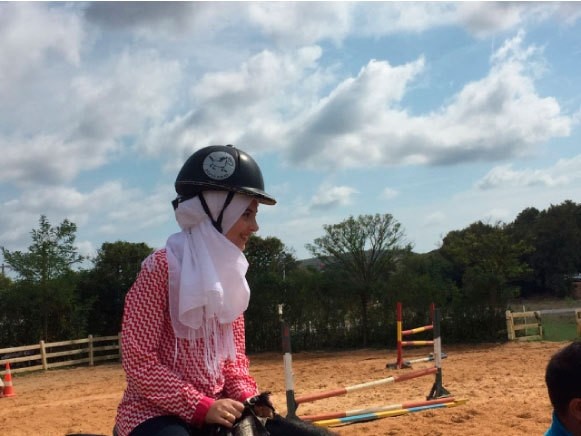 But the school they attend today is on one of the busiest streets of Fatih. The school building is basically an apartment building, without a garden or terrace or balconies. The sole contact with nature for these students is the walk to school and looking out the window during classes.

We were not with them when they made the long journey from Fatih to Çekmeköy. But it isn't hard to imagine... As they crossed the bridge and headed up the Şile Highway, they must have wondered where exactly they were going. What would they see? What would they do? As they passed through Ümraniye and then Çekmeköy, past the shops and car salesrooms, they may have contemplated the differences between the European and Asian sides of Istanbul.

Once past Taşdelen, the greenery starts. Once past the roundabout where huge lorries thunder past, they would suddenly have found themselves among rolling hills and green woods. 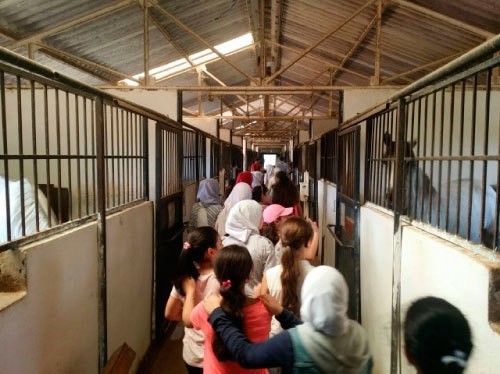 The view as you tumble down the hills toward Ömerli always take my breath away - the green carpet spreads in front of you, with the odd minaret sticking up among the trees. Sometimes it is shrouded in mist, sometimes basking in sun, but it is always breathtaking.

You can imagine them showing their friends, laughing, singing, enjoying what lay ahead. And then they would have turned onto the road which houses a string of little villages that are home to a large number of stables.

They may have wondered who lived behind these windows, these doors, as their school buses trundled down the main street of Sırapınar.

And then the buses pulled into the iron gates of At Evi. They rolled to a stop. The children slowly disembarked; whenever I do an activity with Syrian children I am taken away by the great discipline, the great restraint. They waited in lines as they waited to be told what to do. 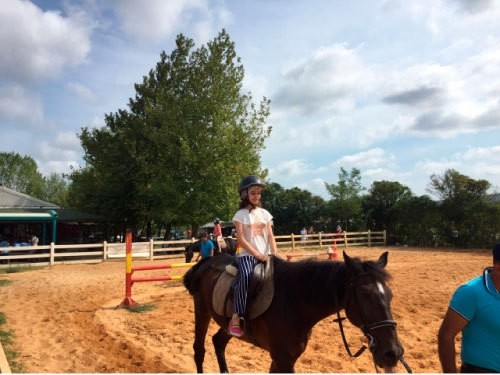 This is when Yasemin Çehrli, one of the owners of At Evi, came up, asking someone to translate for her. A young man volunteered. She took a long look at the kids standing in four straight lines and turned to the translator. "Normally I tell them to behave; not to run or shout and to listen to their teachers. I guess I don't have to. They are so well behaved."

And she was right. The children filed past the chicken coop, stopping to look at the chickens, clucking quietly to them. They then went to the picnic tables. The girls took their jump ropes and went into a corner of the garden to play. The boy scouts sat in rows and chanted a song. The younger boys and girls found a football, a hammock, bags of chips and started to play among themselves. They were no longer quiet, no longer standing in lines. They were milling around. They were laughing, talking, running back and forth.

First different groups were taken in to see the horses up close. Yasemin encouraged them to touch the horses, to make contact. As each group came out, you could see the smiles widening.

After all the groups had visited the horses, three horses were saddled up. Slowly groups of three started to head toward the ring. Solemnly they got on the horses. But that's where the solemn faces disappeared.

One girl gave me a thumbs up. She didn't have the English or Turkish to express what she was feeling and I didn't have the Arabic to understand. But it wasn't necessary. A thumbs up from this teenage girl was all that was necessary. 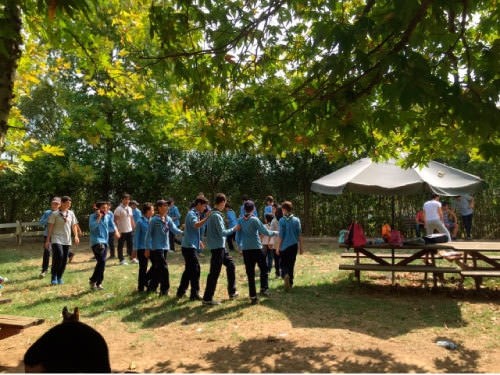 One girl, 8 or 9 years old, was standing on a bench near the stall of a white horse. The beautiful animal thrust its head out the window and looked at the girl. Startled she jumped back. One of the teachers suggested she pet the horse. She couldn't bring her hand to his head. She was afraid. The teacher gently guided her hand. After making contact, after seeing that the horse did not react, did not turn and bite her, she continued to stroke the horse. In fact, she continued to keep her hand on the horse for quite a few minutes, feeling the soft and warm gentleness of the creature.

A friend once told me that horses are half-autistic. This is not simply because they are easily startled, hate change or sudden noises or people rushing at them. In addition, they are able to make connections with children with physical or mental disabilities.

The horses sensed their duties that day. They allowed the kids to hug them, to pet them, to come up closer than they normally let other children approach. The horses were providing therapy for 80 Syrian children. And the horses were as happy as the children. Heads held up high they proudly carried their precious cargoes.

At Evi's environment also provided great therapy for the kids. The green grass, the trees, the picnic tables. Yasemin and Efe Çehreli, the owners of At Evi, joined in all the kids' games, even though they did not know the language; this created an atmosphere of immediate acceptance. Neither Yasemin nor Efe talked down to the kids, rather treating them as peers. Everyone felt so much at home.

It was a wonderful day. The food provided was simple, but ample. Everyone from the minibus driver to the tea lady got in the spirit of the day.

As the day wound up, the children lined up again. This time it was to chant out a loud THANK YOU to Yasemin and Efe. Then they started to head toward the buses. As they did one small boy turned and tugged at his teacher's hand. She leaned over as he whispered in his ear.

"He would like some eggs to take home." His teacher told us. Yasemin immediately ran and produced six eggs for the boy. Looking up at her, he beamed. You knew he was taking those eggs home to someone special. Perhaps his mother, or grandmother. Perhaps his aunt or little sister. It wasn't that important. He had secured something that someone would really appreciate. Being asked to join these children on their days out is a great gift, and one that cannot be overestimated. It provides one with hope, with a new energy to tackle small silly problems. The energy that flows from these kids is contagious and invigorating.

These are special children with a lot to offer Turkish society. Their discipline, their manners, their energy, their joy over simple things can teach us all a great deal.
Last Update: Sep 10, 2016 10:29 am
RELATED TOPICS