Expats in Turkey, how did they view the July 15 coup attempt? 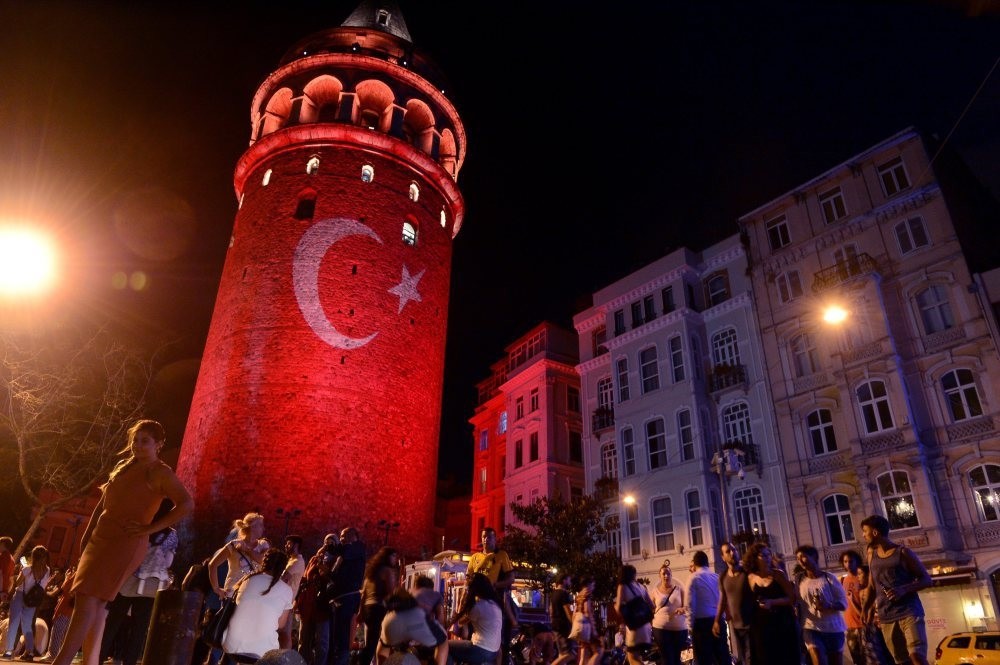 The monumental Galata Tower in Istanbulu2019s Galata neighborhood, a popular expat locations, lit up with the colors of the Turkish flag to protest the coup attempt.
by Ayşe Şahin Sep 12, 2016 12:00 am

The July 15 coup attempt stirred up a mixture of emotions among the Turkish people as well as the expats living in Istanbul. Although most were merely spectators on that deadly night, with different stories and views, they were happy to see the Turkish people stand united against the coup and denounce it

The night of July 15, when millions of Turkish citizens, who were on the receiving end of the putchists' wrath, were aghast at the bloody coup attempt that killed 241 people. The expat community in Turkey, however, probably did not feel such strong anxiety about a future in limbo. Neither could they fully share the despair of a nation on the cusp of a catastrophe. It is also unlikely they were among the ones who poured into the streets to stand against the coup putting their lives in jeopardy. Also, having the option to abandon Turkey and a chance to escape the "disarray," must have come as some amount of relief to them on that dreadful night. But one thing was sure, the expats in Turkey lined up with democracy just as strong as the next Turkish citizen.

July 15, which has found its place in the pages of history as a nationwide struggle against a deadly coup, began like any other ordinary day. Some went to work to run overdue errands before heading into the weekend. Some were on vacation. Some were out, chatting, shopping, wondering what movie to watch, making weekend plans and pondering how best to spend their Friday night . As the evening was gradually approaching, commuters dashed from their homes to meet with friends in hopes of leaving behind the week-long exhaustion with a nice conversation. It was an unexceptional mid-summer evening all across the country and millions, unwitting of the impending danger, were just fine, having moments of pleasure.

But that atmosphere did not last long. As the clocked ticked, nearing 10.00 p.m., the common Friday mood was interrupted by an unusual incident. Gendarmerie forces had blocked the two bridges in Istanbul that connect the city's European side to the Asian. F-16 fighter jets were flying low over capital Ankara. Images of the bridges with soldiers controlling them and flying jets were circulating fast on social media, with many terrified upon seeing these images. The same question echoed in heads: What were military members doing at the heart of the city?

There were two options that could identify the conundrum. Either there was strong intelligence on a possible terrorist attack, hence the government rushed reinforcement forces to the scene, or another possibility - that was no less terrifying: A coup attempt was taking place.

Gee Aydemir, an Australian expat living in Turkey since 2012, was having her henna party when she heard a coup was happening. Her wedding was scheduled for the next day, July 16, so the first thing that popped into her mind, she said, was whether her wedding could go ahead "as planned."

"I really didn't know what to think. It was my 'happy' night. What about the wedding tomorrow, I thought. What will we do? After informing all the guests who had some traveling to do to get home and assuring them they can stay the night, we ended the party and ran to the TV to find out more. Astounded as we watched the TRT anchorwoman forced to read the declaration of martial law at gunpoint, we were praying for everything to be fine. It wasn't until we saw the president speaking on TV through FaceTime that we were relieved. I personally did not know what to think or feel," said Aydemir, as she recounted her story of the coup.

She also added that she felt gratitude toward those "who risked their lives and turned the tables" that night.

"It's thanks to Erdoğan's calm and strategic call to the people and their response to his call that saved us the country from a major disaster."

A British expat, Kenny Laurie, who works a copy editor in Istanbul, was performing in Taksim when it was more or less conspicuous a military take-over was attempted. It was not until the performance was over he could sense something awkward was going on. There were an unusual number of missed calls on his phone along with messages warning of a coup taking place. Laurie said what he initially felt was "disbelief and shock," but he also admitted, a small part of him felt "excited" to experience something he had never seen before.

"A part of me, maybe a stupid part of me, was quite excited. How often do you get to see a coup? I think when something monumentally bad happens like that, excitement isn't a rare emotion. Also as a foreigner you feel a general sense of immunity - if things really go wrong, you can always go home, so I felt more like a spectator. Really, I couldn't think much at all because it was so huge and all-encompassing. It wasn't till afterwards that I felt down about the whole thing."

As Laurie stated, it was not until late in the night that the gravity of the situation was genuinely felt. Around 11 p.m., tanks were moved to the Istanbul' Atatürk International Airport and the headquarters of the National Intelligence Organization (MİT) was surrounded by the plotters who opened fire on the building. And just then, Prime Minister Binali Yıldırım delivered a live statement elaborating that a faction within military was attempting coup, adding they would not allow the putschists achieve their aim. That reassurance helped a little, but things went from bad to worse in a short span of time. Toward midnight, coup forces seized the state-run Turkish Radio and Television Corporation (TRT) building in Ankara and its anchor with a gun pointed at her, read out the coup declaration live on TV.

That must have been the moment when hopes dimmed for the entire nation that the attempt could not be obviated. "Now what?" asked many, "What will follow this?"

Since it was not the first time Turkey witnessed a coup, everyone tried to recall how things looked like in the aftermath of a coup, finding fresh in their memories the instances of violence, restraint and instability.

"We were terrified that Turkey would become like Syria," said Omar Bangin Mohammed of Syrian origin, alluding to July 15. Mohammed said he spent the night at home watching the "harrowing" developments on television.

"Is our life going to change? Are you gonna lose another future in war?" Mohammed kept asking himself as he continued to hear the sound of gunshots from where he lived.

The entire night was chaos for everyone as no one felt safe. Jets were buzzing low over the city creating sonic booms horrifying people each time. Military helicopters were opening fire on the civilians and every 10 minutes the sound of gunshots could be heard from key locations of the cities. The Parliament building was bombed 11 times over the night. The whole nation was locked into the news, appalled at the violence engulfing the two cities.

An American expat, Peter Klempner, said he was with Turkish and American friends at a teahouse in Aksaray when it became obvious a coup attempt was happening. He said the entire night, he and his friends tried to imagine scenarios of what might happen if the coup failed or succeeded.

"We thought about what we would do if the coup was successful and the airports were closed, as had happened before, and we would not be able to leave if need be. We also thought about what the atmosphere would be like if it was not successful, what type of anti-American sentiment would be whipped up, as tends to happen more often than it is warranted - exactly how dangerous would my home become for me?"

As Klempner was preoccupied with such thoughts, he said he kept in mind that there was always the choice of going back home in case of danger. But as the coup was foiled, he decided to remain in Turkey.

It was not until sunrise before people in Turkey could go to sleep that night. By then, it was more or less explicit the coup was prevented. Security forces warding the plotters off was no mean feat, but most agreed, those who deserved most of the credit for thwarting the coup were the people who took to the streets after President Recep Tayyip Erdoğan called them to "resist the coup" and "defend democracy" in the squares and streets. Shortly after midnight, Erdoğan, who was vacationing in the western coastal city of Marmaris connected to CNN Turk via FaceTime on his smartphone. Erdoğan's strategic move was later assessed by critics as the turning point of the events. Turkish citizens, who until then were in an emotional limbo, going back and forth between fear and hope, plucked up their courage after the president's call and streamed into the streets where they displayed a huge determination to put up a fight for democracy.

"Democracy won," said American expat Mindy Yartaşı, who is married to a Turkish citizen and has been living in Istanbul for 11 years. Alluding to Turkish citizens' share in the "triumph," Yartaşı added: "It was amazing to see civilians facing down tanks and guns. I always knew Turkish people had heart, but I never realized how much, until that night. They stood in front to rolling tanks. Loaded guns... Under armed helicopters... Some of them didn't make it home. I appreciated their passion, love for their country and their sacrifice."

Another expat who asked to remain anonymous shared Yartaşı's sentiments: "I was really happy to see that, despite deep ideological differences, people could come together to denounce the coup."
RELATED TOPICS