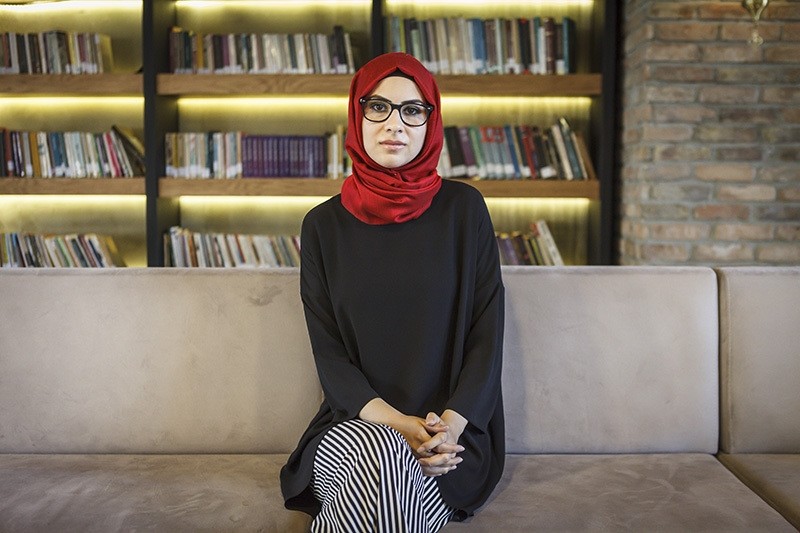 Thinking they would return home to Aleppo in a matter of months, Israa brought to Turkey with her only a backpack containing some essentials and most importantly a Turkish dictionary. Unaware that fleeing the war in her country and settling in Turkey would open doors she never imagined, the girl from Aleppo now dreams of becoming a consul general or ambassador one day to help make the world a better place for everyone

How about a vacation to Aleppo in Syria? You can book a room at Baron Hotel, the city's oldest yet "grandest and most stylish hotel." Agatha Christie preferred room 203 during her stays and wrote parts of "Murder on Orient Express" there. You must add to your "to-do list" a shopping trip to the city's seven-century-old bazaar. Make sure you don't skip the Grand Mosque, Aleppo's largest and also one of its oldest. Oh and while in the ancient city, do not forget to visit the 13th century citadel.

Oops! If you were to do an online search on the city, this is where Google would - or should - say, "Sorry, your search returned no results," because Aleppo is no more. UNESCO states that the damage during the conflict in Syria "has affected six World Heritage Sites" in the country along with "11 sites inscribed on UNESCO's Tentative List." The Ancient City of Aleppo is one of those six UNESCO-recognized sites.

It was the year 2012, many had already abandoned their homes in Aleppo. The Syrian civil war had started, but the Abdullatif family had stuck around a little more – until the day they saw through their window the tanks passing by. The eldest child of the family, Israa Abdullatif, then 17, says, "I thought, this is it, we are going to die. Life is over."

It wasn't planned or thought out. They decided to flee to Turkey. The family packed small bags, making sure they were light enough to carry with ease. Israa took what she thought was most important: A Turkish dictionary.

After pouring a heap of money to hire one of the rarely available - taxi - vehicles in town, the Abdullatif family safely made it to a relative's house, only to find that almost everyone else was there too. It was a very small house, but so far the safest place to be - until one day they started to hear bombs exploding in that area as well. They spent the entire night, some 30 people, all cooped up in the bathroom, afraid, praying for their life. After spending 10 days there, the time had come to say goodbye. Little did they know it would be the last time they saw their home country.

Thinking they would return in a couple months, the Abdullatifs wanted to settle in Turkey's southern province of Hatay for the time being. They had relatives there whom they used to visit during the Ramadan and Qurban bayrams every year when the customs gates would open, allowing free passage to the people.

After an arduous - and much more costlier-than-expected - journey to Hatay, taken to Gaziantep first and swindled to pay an extra heap of cash to take them instead to their original destination, the wait to return home to Syria had started. Days turned to weeks, weeks turned to months and it was gradually dawning upon the Abdullatifs that their stay in Turkey will be longer than they thought.

Father Abdullatif had to leave behind in Aleppo all the riches he had earned and owned, including his three homes. Most of the cash he had was gone during the "memorable" journey to Turkey and what was left of it was fast running out. With no employment opportunities and hence the lack of income and the limited number of things that could be done in a small village in Hatay, Israa begged her father to make the move to Istanbul. It had taken great effort to convince him, but she eventually triumphed.

Although she was born into a family that was considerably "well off," Israa lived a secluded life, having very little physical contact with the outside world. The women in Syria feared rape more than anything else. "Bashar Assad's regime is filled with evil men, the worst kind you can find. All the criminals in prison, rapists, murderers, thieves, you name it, they were all released to reinforce the regime's forces. Doors being knocked down by armed men from the regime entering people's homes and raping women as they please had become a common thing. So women would remain indoors as much as possible," she said, explaining why she lived such a closed life. She speaks Arabic - her mother tongue - English, French and Spanish, with Turkish also under her belt now - and very fluently indeed - yet, she still had much to see, much to learn.

Stepping foot on Istanbul soil and setting her eyes on the city she had longed to see, Israa was suddenly overcome by fear, shaking at the sight of overcrowded streets, buildings, built almost on top of one another, the heavy traffic, the noise... Unlike anything she had seen before in her life, it was all too much, painful even.

Israa, very aware and sensitive to her surroundings, knew it couldn't be easy on her father. Carrying the burden of his wife and three children on his heavy shoulders, father Abdullatif had left behind everything. No longer a young man, how easy could it be to start life anew? But for Israa, Turkey, Istanbul meant hope. This country she now calls "home" was a lifetime opportunity, a new chance.

"Everybody hated each other in Syria. I was not allowed to make friends with the Shiites, the Alawites or Kurds. And they would not approach the Sunnis. It was forbidden. There was no love," is how Israa describes the relations among the people. "This is why the war broke out. Each group believes they are superior to the other. Nobody wanted to be ruled by any of the other groups."

Upon being asked which group she would prefer to have the power to rule Syria if she could choose, "None," she said, definite and clear: "No group is fit to rule the country. Syria needs a leader like Turkish President Recep Tayyip Erdoğan. No other leader is fit enough to run or rebuild the country."

"You have freedom in Turkey, whether you are male or female," she said, comparing it to her country: "Women in Syria are nobodies. We existed, but with no voice or function in such a male-dominated society. We didn't know life there. The only dream girls had in Syria was to get married and set up their home. The only way a woman had any chance of saving her life and proving herself was if she studied. All I wanted was to study, it didn't matter what, as long as I made a career for myself, it would be enough to escape the constraints in the country."

It is a commonly accepted fact that war is not a good thing, nowhere, for nobody. Yet, a firm believer in the Quranic verse, "But perhaps you hate a thing and it is good for you, and perhaps you love a thing and it is bad for you. Allah knows, while ye know not," (Al-Baqarah:216), Israa thinks the Syrian civil war could be a wake-up call for Syrians or possibly a means - for her own self at least: "Had it not been for the war, it would never have crossed my mind to move to Turkey or elsewhere. I would not have been allowed to. Now at 21 years old, I would most likely have been married with who knows how many children. But today, I have the opportunity to do the things I never even imagined I could. I have a voice, I have rights, I have the chance to help others."

The journey from Aleppo to Istanbul was also Israa's journey to finding herself. The only thing she really wanted was to get a university degree in Turkey. After enduring research trying to find out what was required to enroll, she sat an exam and got accepted into the School of Business. Months into the course, coming to terms with the fact that this was not what she wanted, Israa studied some more and re-sat the exams the following year. This time it was right. She got what she wanted and after graduating from Marmara University's language department, Israa would become a translator - the start of a career that would never be possible if she stayed in Syria.

In addition to a tough transition to Istanbul, Israa, unaware of the hardships awaiting her at the university, she was excited to start. The majority of her Turkish peers in the course resented her and felt no shame in openly telling her they hated her and were not happy seeing her. They thought, Israa, representing - in their eyes - the millions of Syrian refugees fleeing to Turkey, was taking away their privileges and rights. Israa telling them that she was there to replace nobody and that she had to study hard like everyone else to get into university, she had earned the privilege, was in vain. So Israa decided there was only one way she could prove to them that she really did deserve to be there: Work harder.

Her efforts eventually paid off, she made it to the top of the class in prep year and now in her second year, she is a student all the other students go to for help. "But I am still discriminated against," she says, adding, "Whenever a bomb explodes somewhere in Turkey, the discussion always ends up turning to me, insinuating that I am responsible, because they believe the attacks are the result of Turkey's foreign policy on Syria and me being from Syria turns me into the target of all their arguments."

Dreaming of becoming a consul general or ambassador one day, Israa's ultimate goal, the first area she wants to make changes is education. "It is the lack of a proper education and ignorance that instills hatred in people, leading to division and destruction. Education is a means to improve, to develop. Hence, children need to be raised properly with a strong foundation, which is possible through good education, so that we can have hope in the future."

Despite leaving home, thinking they would return in a matter of months, now, four years later, Israa has lost all hope that the war will end. "Let's say the war is over. What do we have left to return to? Our homes, our cities are entirely destroyed. Turkey is our home now and I feel blessed to be here. This country has offered us great opportunities, the government and the people in general have opened up their homes to us, given us food and clothing. We need to work hard and show we are worthy of everything they have done for us."

Aware that the country is beyond repair, "It won't be decades before Syria is back to normal. Who knows, maybe even longer? So we, particularly as Syrian women, who have long been oppressed and excluded in the name of a twisted interpretation of Islam, have a greater burden on our shoulders. We need to understand the importance of our role, become educated, make a career for ourselves and raise conscious, role model children, who do not discriminate, teach them to love and hence, one day they might have the chance to rebuild Syria on a stronger foundation," she said, making it clear that going back to Syria will not be an option for the Abdullatifs in the near future.