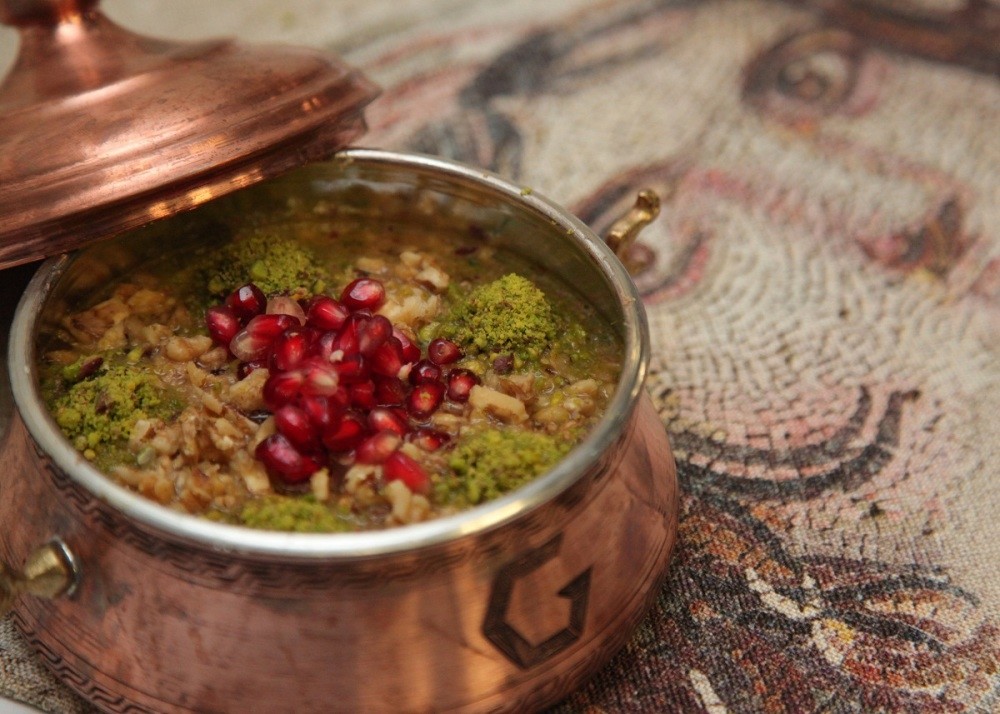 Ashura, the 10th day of Muharram, the first month of the Islamic calendar, is one of the religious holidays celebrated among Muslim and Jewish people with different connotations and stories

Ashura, a pudding that is prepared using several ingredients and bursting with different flavors has been served on family meal tables across Turkey, Egypt and the Middle East for centuries. The pudding is also known as "Noah's Pudding" for its historical religious significance.

According to the legend, when the ark of Prophet Noah landed on Mount Judi on the 10th day of Muharram (the first month of the Islamic Calendar), there was not enough food left with them. Noah asked his family to bring all the food items remaining on the ark to prepare a sweet soup by mixing them all together. Ashura symbolizes the celebratory meal they made when they came off the ark.

Since then, Muslims have been celebrating the 10th day of Muharram to commemorate Noah's survival from the flood by making ashura and sharing it with family members and neighbors. The word "ashura" takes its root from "ashur," meaning "10th" in Semitic languages. 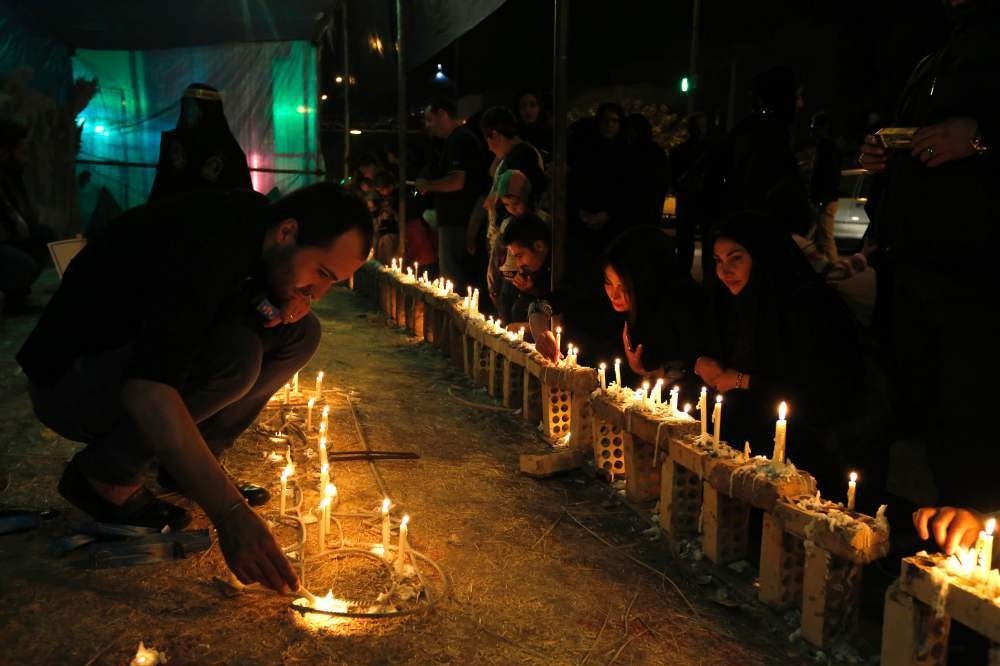 Shiite Muslims light candles during an Ashura ceremony in Tehran.

What is interesting about ashura is that the dessert is uniquely rooted in religious history, bringing interesting accounts. According to Islamic sources, it is believed that the 10th day of Muharram is significant both because on this day Prophet Adam's repentance was accepted by God after his exile from Paradise and God saved Prophet Noah and his companions in the ark. Another account regarding the origins of ashura is rooted in the time of Moses when God spoke directly to the prophet and gave him the Ten Commandments and the sea was divided as the nation of Israel was delivered from captivity and Pharaoh's army was destroyed.

Another hadith narrated by Ibn Abbas, one of the early Quranic scholars says, "The prophet came to Medina and saw the Jews fasting on the Day of Ashura. He asked them about it. They replied, 'This is a good day, the day on which God rescued Bani Israel from their enemy. So, Moses fasted on this day.' The prophet said, 'We have more claim over Moses than you.' So, the prophet fasted on that day and ordered [the Muslims] to fast [on that day]."

The accounts make it clear that ashura was not only unique to Muslims but has a history dating back to the pre-Islam era as Arabs were fasting on the 10th Day of Muharram as well as the Jews of Hejaz.

Today, Jewish people mark Yom Kippur, the Day of Atonement, with ashura. Yom Kippur is on the 10th day of the Jewish month of Tisri and one of the holiest days in Judaism. However, the Islamic and Jewish calendars differ from one another: Yom Kippur is celebrated in between September and October every year yet in the Islamic calendar the days change every year based on the lunar cycle.

An Indian Islamic scholar, Shaykh Abul Hasan Ali Nadwi, makes reference to ashura's cross-religious nature in his article titled, "Is the Fast of Ashura Similar to Passover or Yom Kippur?" where he says, "It is also possible that the Jews of Medina differed to the other Jewish communities where the Fast of Ashura was concerned and observed it with greater enthusiasm and regularity, and, in this respect, they were similar to the Arabs who, seeing that so many important events had taken place on that day, fasted out of reverence." To sum it all up, let's read from the Holy Quran, al-Baqarah 2:183: "O you who have Faith! Fasting is prescribed for you as it was prescribed for those before you, so that you may guard yourselves [against evil]."

Ashura is still celebrated by many Muslims as a Sunnah and to commemorate Prophet Noah in unity until the horrible tragedy that took place in Karbala of Iraq. Due to political reasons, Hussein, Prophet Muhammad's grandson and indeed the apple of his eye, was murdered by a large army that was mobilized by the Umayyad ruler Yazid I. Even though Hussein and his companions offered diplomatic solutions, the army put them under pressure to pay allegiance to the Caliph of the time and submit to his authority. Hussein resisted and a severe battle took place in which they were all killed on the 10th Day of Muharram.

The martyrdom of Hussein caused reactions among the ummah in the Islamic world. He was from the "Ahl al-Bayt" (The family of Prophet Muhammad) and since loving the Ahl al-Bayt is considered a part of the faith, this disastrous incident caused trauma not only for the followers of Ali who want to see Hussein as the successor of the prophet but also for all Muslims. It was so traumatic that it cracked the Ummah and divided it into two sects known as Shiites and Sunnis. Both Shiites and Umayyad rulers brought this tragedy to a political dimension by feeding hatred that kept getting bigger and bigger, growing into the division that we now see today.

Since the 10th Day of Muharram in the year 680, Shiites have been honoring Ashura as a day of mourning for the martyrdom of Hussein. Shiite Muslims consider this a day of sorrow and observe it as such by reading and listening to sorrowful poetic recitations, dressing as mourners would, and avoiding celebrations such as weddings. This ceremony is called "Azari" or "Matam." It refers to mourning congregations and lamentations. Through this, Shiites express their emotions and hostility toward Yazid I, the Umayyad caliph.

Expressions of sorrow such as beating the chest, beating oneself with chains and striking oneself with swords or knives are some common features of the Ashura ceremony. Today in Lebanon, Iraq, Iran, Afghanistan and Pakistan, these ceremonies are still observed.

Ashura mourning used to take place in Istanbul, the heart of the capital of the Sunni Caliphate Ottoman Empire, which shows the level of religious tolerance of Ottoman-Turkish authorities who allowed the Shiite Ashura ceremonies to be celebrated by the Iranian community in the streets of ancient Constantinople. In Turkey, the Day of Ashura is still widely celebrated at historical sites.

Georgia Maxwell, whose son had worked at the British Embassy in Istanbul back in 1893, was invited to an Ashura ceremony in Istanbul by then-Iranian ambassador, sharing her observations and astonishment in her book, "Letters from Constantinople" in the section on Hassan and Hussein: "We wondered why we had been told that only people of strong nerves should attend this celebration. Came the men with the swords, cutting themselves, particularly their heads, in good earnest, so that one had to stand back to avoid the blood which spurted forth in all directions. Soon their white shirts were crimson with blood, their heads looked as if covered with a red fez, and the pavement was running with blood and yet these people marched on as if on parade."

The most significant Ashura mourning takes place in Istanbul organized by the Jafari community of Shiite Muslims. They dress in all black with their hands chained in a symbol of suffering for Hussein. The ceremonies in recent times are less bloody compared to the past and Jafari locals nowadays choose to donate their blood to the Turkish Red Crescent to save lives rather than to let it go to waste.

Ashura is also celebrated by Alevis, or followers of Ali - Prophet Muhammad's son-in-law - in Turkey. Alevis differ from Shiites in that they observe fasting during the first 12 days of Muharram. They don't use knives, drink water from glasses or eat meat while fasting during this time. On the 13th day, they cook ashura and distribute it to everyone regardless of whether they are Sunni or Shiite. It is also told that according to the Bektashi tradition there are two types of ashura. The first one is Ashura of Safar (the second month) and the Ashura of Muharram. While the Ashura of Muharram was to commemorate the martyrdom of Hussein, the Ashura of Safar was cooked to celebrate Zainal Abidin's survival from Karbala and the continuation of Prophet Muhammad's descent.

Ashura is like a medal, on one side there is sorrow, on the other there is joy. However, the most important duty for Muslims all around the world is to carry this medal conscientious of its beautiful variety which represents the variety on Noah's Ark, rather than using it as a flaming tool for sectarian conflict. May God bring peace and unity to all humankind for the sake of Muharram.
RELATED TOPICS