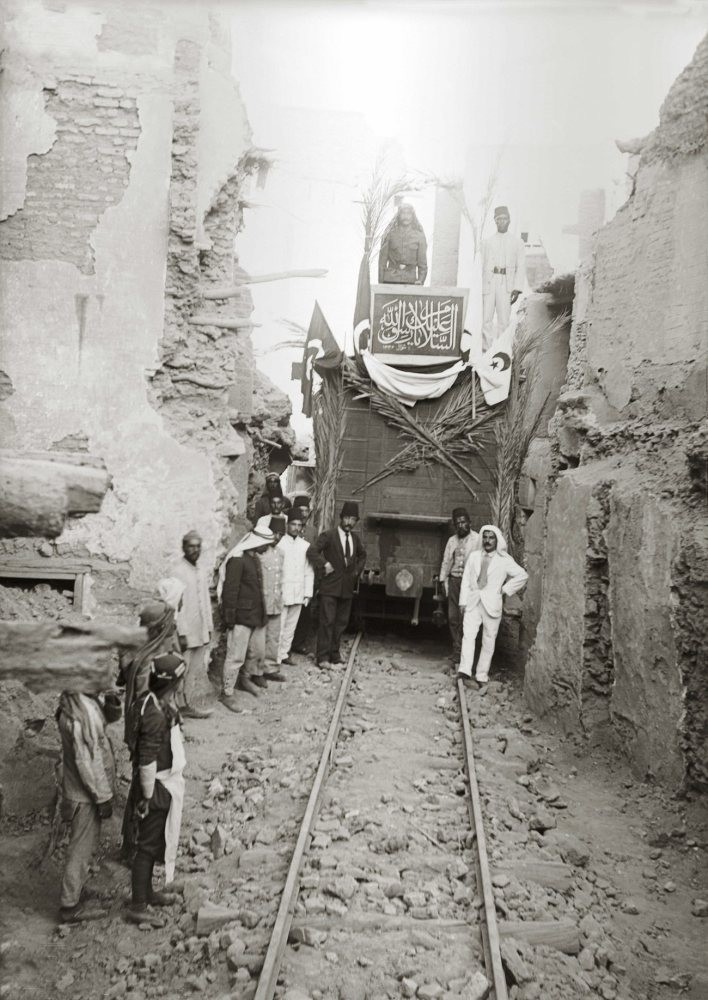 Built upon the order of Ottoman ruler Sultan Abdulhamid II, the Hejaz Railway provided a modern means to transport pilgrims to Mecca and Medina by replacing old camel caravans as well as served to strengthen relations in the Islamic world

The Ottomans understood the importance of the railway right from the start. Just as new inventions such as the telegraph and tramway were adopted easily, the empire began to get connected through railways. Ottoman Sultan Abdülhamid II commissioned a railway connecting Istanbul to Hejaz and took the opinions of prominent statesmen beforehand.

Hajj travel would be easier

By building this railway, the safety of the Ottoman territory as far as Yemen would be ensured and the transportation of troops would be much easier. In fact, the railways in Rumelia came in handy in some battles. Building a railway to Hejaz would enable the country to take precautions against Britain, which had previously invaded Egypt, and the neighborhoods the railway went through would also be economically developed. Most importantly, the railway would facilitate the travels of hajj pilgrims. Back then, the pilgrims were able to reach Medina from Istanbul only by caravans and with many troubles over a period of two month. There was also the risk of getting into trouble with Bedouins on the way.

The Ottoman sultan, who saw emphasizing Islamic unity and the influence of the caliphate as a must, decided to build the railway from Istanbul to Hejaz, even if it was a tough and costly business. This decision was received with joy in the Islamic world. The Europeans, on the other hand, regarded it as a project which was impossible to realize.Well, how would the necessary money for the construction of the railway going be found at a time when the empire was going through a rough patch? The total cost of the railway was estimated as 4 million Ottoman liras (around 570 kg of gold). This amount corresponded to almost 20 percent of the entire Ottoman budget at that time. The financial wounds of the Russo-Turkish War of 1877-1878 had not yet been bond up and the Ottoman Empire was paying war compensation to Russia as well. The empire had a deficit in its budget and the salaries of the state officials could not be paid on time. On the other hand, the construction of the Baghdad Railway which was contracted out to the Germans was going on. A nationwide donation campaign was launched. Notably the Ottoman sultan, Ottoman dynasty, prominent statesmen and even the public donated substantial amounts. However, it was clear that donations would not be enough for the construction of the railway.

Just then, the Islamic world came to the rescue. Muslims living outside the Ottoman territory began making large donations through Ottoman consulates. From Morocco, to Egypt, India, South Africa and Kazan, which were occupied and colonized by Europe, all the Islam realm raced to contribute to this endeavor. The khedive of Egypt, shah of Iran and nizam of Hyderabad made donations to the cause. The donation campaign turned into a matchless project in terms of Islamic unity and loyalty to the caliphate. Non-Muslims living in the Ottoman Empire did not fail to donate either. Donations came even from Europe. To be given to those who made donations, Hejaz Railway Medals were issued.

A committee led by the sultan was founded for the construction of the railway. Materials were also imported from Europe and the U.S. Thousands of soldiers and local construction workers worked in the construction. Ottoman engineers and technicians got involved in most of the project. The construction of the Hejaz Railway which would connect Istanbul to Medina, Mecca and Yemen through Damascus was launched in Damascus in 1900. Four years later, 460 kilometers of the railway was finished and it reached to the city of Maan, Jordan. The railroad was also connected to the Mediterranean via Haifa. Thousands of bridges, culverts, lakes, tunnels, factories, manufacturing plants, piers, warehouses, refineries, dormitories for workers, hospital and water tanks as well as railway stations in every city were built.

Finally, the Hejaz Railway reached to Medina and was inaugurated with a ceremony in 1908. The railroad, which was 1,464 kilometers long, cost 3 million Ottoman liras (around 430 kg of gold). This amount was much lower than other railroads that were built on the Ottoman lands by European companies. The total cost was cut much more than it was first estimated because the money was spent only on supplies and considerable money was saved on workers and technicians.

The debut departure on the Hejaz Railway took place on Aug. 27 with guests from Istanbul and the train traveled from Damascus toward Medina. Aside from a state delegate, there were local and foreign journalists. The special train had a large hall wagon along with a three passenger wagon and another one used as prayer room. It used to go between 40 and 60 kilometers in an hour, a rate that was very good at that time. Only for prayer and refueling was the train was stopped. While passengers observed their prayers in the desert, camels were bringing water for refueling. Three days later, the train arrived in Medina.

Following the inauguration of the Hejaz Railway, passenger and commercial goods began to be exchanged every day between Haifa and Damascus and three days a week between Damascus and Medina. During Hajj times, three train services took place between Damascus and Median until the end of Safar month. Only during the hajj period, a single ticket was enough for a round trip. The road between Damascus and Medina which used to take 40 days on camel back was traveled in 72 hours. The departure schedule was arranged according to praying times. Additionally, an entire wagon was used as a masjid in every trip and a muezzin was on duty all the time. On religious days and Mawlid (the birthday of Prophet Muhammad) cheaper trips to Medina were provided to the passengers. The wagons were also organized in order for families to travel in comfort.

When the Hejaz Railway was completed, the Bedouins were assigned to the protection of the railroad and were put on the payroll. Many technicians were trained for the construction and maintenance of the railway. The Ottoman Empire and caliph earned a huge prestige; the self-confidence of Muslims refreshed. Indian Muslims asked to extend the Hejaz Railway to India via Baghdad and declared that they were ready to do their part in the construction of the new railroad.

When the Young Turks came to power in 1908, the railways name was changed from Hamidiye-Hejaz Railway to Hejaz Railway. The management of the railway was also assigned to the Ministry of War. The Surre Regiment began to be sent via the Hejaz Railway. Due to the transportation of goods, the regions where the railway passed though developed economically. Meanwhile, the length of the railway reached 1,900 kilometers with the construction of side roads. The plans of extending the railway to Mecca and Yemen as well as Baghdad failed to be realized. The British and the French were highly troubled with the construction of this railway as the winds of war had begun to blow.

During World War I, the Hejaz Railway was used to transport military troops. By means of the railway, Medina maintained communication with Istanbul and resisted until 1919. The last tip of the Hejaz Railway to Istanbul was orchestrated to bring the Islamic Sacred Relics upon the fall of Medina. With the truce in 1918, the Ottoman Empire lost control over most parts of the railway. Upon the fall of the Syrian front, the British bombed the railway to sabotage it. What is more, the well-known spy Lawrence distributed a piece of gold to bandit Bedouins for each rail and travers they dismantled and destroyed on the railroad from Maan to Medina.

While the Medina station was established, each hammer was covered with felt cloth to respect Prophet Muhammad's soul. Similarly, to avoid excessive sound, the trains' wheels were also covered with felt. Some Ottoman-era rails in Jordan relay the following: "Haza min hayrati emiri'l-mü'minîn Sultan Abdülhamid Han Gazi azzehu ve nasarahu" (The rails are the charities on behalf of the Gazhi Sultan Abdülhamid. May Allah bless and help him). The Ottoman caliph showed grace by having its name on rails on which Hajj pilgrims traveled on.

The Hejaz Railway is still in use in Syria and Jordan and the Saudi government is working to make the railway active again. A 452 kilometer stretch of the railway lies in Jordan, and both passenger and freight trains pass along it through the cities of Al-Mefrak, Zerka, Amman, Jize, Al-Qatrana and Ma'an.

Aside from the railway's Ottoman-era stations, suburban trains are still in use from Amman to Zerka. The train wagons are adorned with photos of religious, historic and touristic spots in cities like Jerusalem, Damascus and Hejaz. A plate has the following line in Ottoman language - "Haricde vukuf memnu'dur" (It is forbidden to dangle outside).