Age of Fire: The disaster that menace Ottoman cities 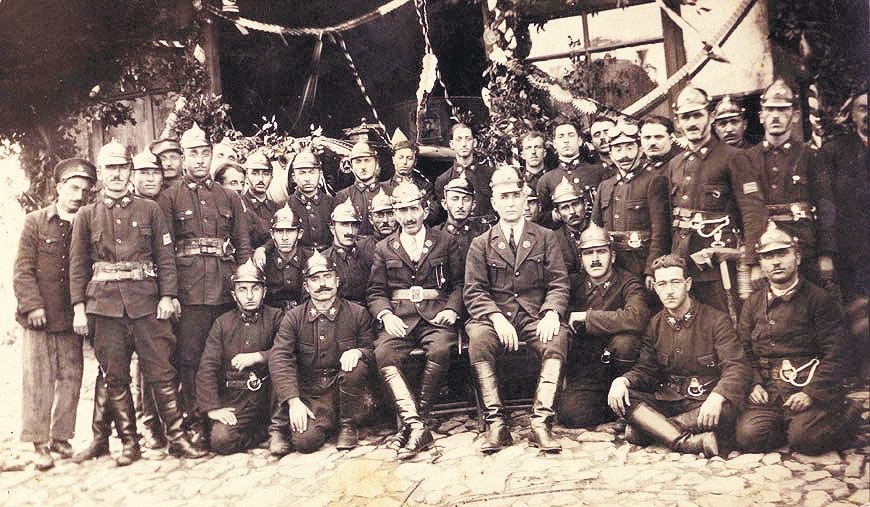 Ottoman fire fighters after an official fire department affiliated to the military was established in the first half of the 19th century.
by Ekrem Buğra Ekinci Nov 04, 2016 12:00 am

Of all the disasters that hit Ottoman cities, fire was the most destructive. City-dwellers were experienced in preventing fires as well as saving valuable property

Fire, earthquakes and floods were the three natural disasters that threatened cities in Ottoman times. Also worth mentioning is migration, a man-made "disaster", with the saying of old people: "Two migrations are equal to a fire." These disasters not only caused the loss of life and property but also that of many books, documents and artworks.

The time of year when eggplants are in-season ushered in fires. Many blazes broke out because people forgot about the eggplants that they were frying in pans. The newspapers even featured warnings saying: "The season of eggplants is here. Ladies, beware of the fire!" Absent-minded tobacco addicts also caused many fires; hence Ottoman sultans prohibited the smoking of tobacco, with severe penalties. There were also a considerable number of fires, which broke out due to sabotage or in shipyards where flammable materials were used.

The Ottoman cities were generally built with wooden construction materials for two main reasons. First, Anatolia is within an earthquake zone. If the buildings were constructed with stone or brick, it would be difficult for people to survive the destruction following an earthquake. As well, wooden houses shake like a cradle but not collapse right away, giving people time to flee. An earthquake happens in a heartbeat, while fire is a disaster that gives more forewarning. Hence, the Ottomans rated earthquakes a higher risk than fire and the houses were built with wood.

The second reason for this choice was the lack of ample stone quarries in Anatolia, which was covered with forest. Compared to stone, wood was cheaper and easier to transport. So, the Ottomans used stone for public construction such as religious buildings, madrasas, hospitals and bridges, and wood for houses, unlike the Europeans. Generally, wood lasts for a mere one hundred years, which is why it is hard to find examples of centuries-old civilian architecture in Turkey.

When man faces disaster, of course, his primary concern is his life. However, it is not easy to give up on property either. After disasters such as fire, earthquakes and floods come and go, things that are left behind are rescued. The thing about fire is that it does not always burn everything to ashes; it gives notice ahead of time. The wooden houses in Istanbul and Bursa were attached buildings due to the limited space and high value of land in these cities. This meant the fire that broke out in one house could easily reach others. If the fire had a helper such as the "lodos" (strong south-westerly wind), it could lead to the destruction of thousands of houses. In order to avoid fire that originated from neighboring houses, "lodos walls" facing southwest were built in the gardens of many houses in the Ottoman era.

'Rescue first in case of fire'

Once a fire broke out in one of the houses, the city-dwellers who were experienced in such situations predicted whether it was going to spread to their house or not, according to the weather and the position of the neighborhood. After that, the property in the house was taken out by hand. Ottoman homes were not usually crowded, so it was possible to empty the house without needing any help from the neighbors. But how many goods could be taken out with all the haste? And where were the goods to be stacked? All of these were major problems.Fire does not always give fair warning; it can break out suddenly, and before anyone understands what is happening, burn a house down. In these cases, one should prioritize his or her own life. Essential property to be saved in case of fire is pre-established — the phrase "Rescue first in case of fire" is featured on cupboards in government buildings.

"Essential" property can include things that are light in weight but heavy in value. In classical Ottoman society, women's jewelry was made of silver. Using gold for jewelry was not a tradition back then, as gold was used for savings. The gold that was stacked in the house could melt if there was a fire, thus gold was among the first things to be rescued. Generally, every house had a box made of iron, which could be easily carried around and hidden. It was similar to the "earthquake bags" of the present day.When proving rights, property ownership and possessions on paper came into fashion, the Ottomans took great care to preserve official documents. Cities and towns invaded during World War I were evacuated. The land registries were also carried outside the cities by carriage, ox cart and donkey during the tumult. This is why the land registries survived but civil birth records were destroyed in areas that were razed during the enemy attacks. Following the occupation, the population registrations were remade on verbal confirmation. The government officials had to make a choice and chose to rescue the land registrations. At any rate, the archives of population, finance and courthouses were a source of unease to the public because they could lead to obligations such as military duty, tax or jail time.

In order to prevent valuable books from burning in a fire, a one-meter thick wall was built in Ottoman libraries and the brick roofs were dome-shaped. The window shutters also featured imperishable iron bars; the librarians closed these shutters as soon as a fire broke out. This way, a fire that burned entire neighborhoods did not hurt the libraries.

Fires in Istanbul were monitored from two towers, which are still standing today. Fires were declared to the public with flags in different colors according to the districts where they originated. There were even times when the grand vizier and sultan visited sites due to the gravity of the fire. Palace and government offices also had their share of blazes. One of the most terrifying fires in Istanbul broke out in Cibali in 1633 and one-fifth of the city burned down. The Ayazma Kapısı Fire in 1660 lasted for three days and later had elegies written about it. Hundreds of buildings burned down and 4,000 people were killed. The biggest fire after these broke out in Cibali in 1718. It spread to the entire city and destroyed thousands of buildings. Following the Cibali Fire, new town planning in 1719 aimed to prevent fires and a fire department was established.

From then on, every district had a voluntary fire team made up of the district's young people. A water pump made by Davud Göçek Ağa proved very efficient and it was the team's duty to take the pump (a chest filled with water) to the site of the fire and attempt to extinguish it. They would also empty and demolish the property where the fire originated to prevent it from spreading. They carried out these duties voluntarily; however, they did not refuse to take a tip. Being a voluntary fire fighter for the state had a distinguished place in Ottoman culture.

Despite these efforts, the fire that broke out in Beyoğlu in 1870 burned down 3,000 houses while the fires in Aksaray in 1911 and Cibali in 1918 burned down 2,400 and 7,500 houses respectively. The families who lost their homes were temporarily assigned to houses belonging to the waqf (foundation) institutions. A fire department affiliated to the military was established in the first half of the 19th century and this department was modernized in 1874. Since then, fires threatening Istanbul have not been characterized as so disastrous.
RELATED TOPICS