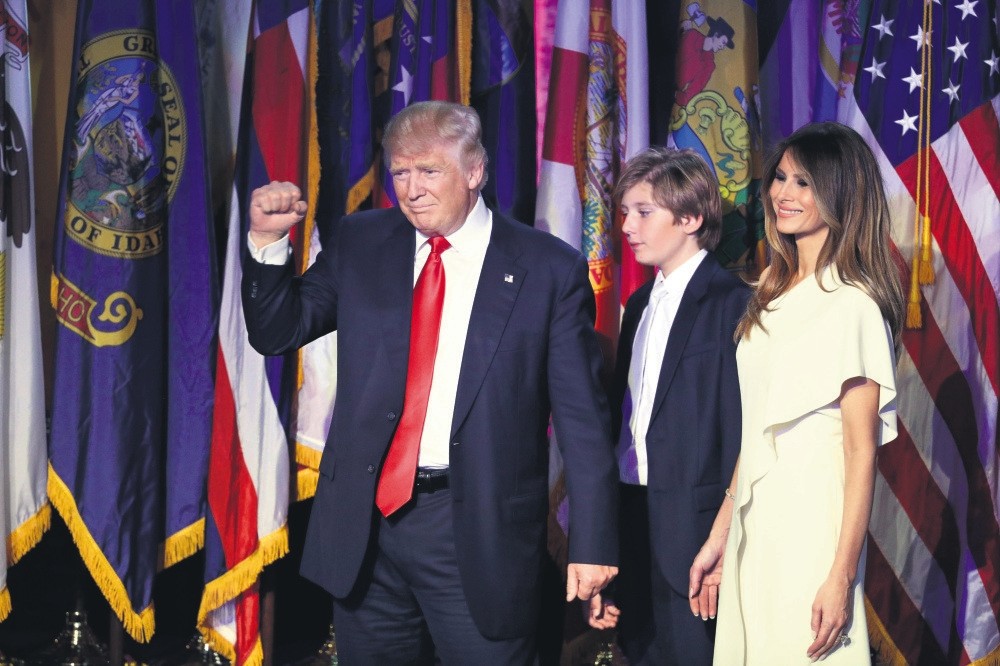 President-elect Donald Trump at his acceptance speech with his wife Melania Trump, right, and their son Barron Trump.
by Jane Louise Kandur Nov 12, 2016 12:00 am

The emotions that are pouring out after the American presidential election last Tuesday are oddly familiar. The cries of 'Not my president!' that could be heard in protests around the United States on Wednesday echoed the dismay in the U.K. after the Brexit vote. The 'How did this happen? What on earth is going on?' head-in-hands reactions were very similar

In fact, the similarity was so striking that the BBC provided survival tips to their American cousins. These tips included: "Read around and try to understand why other people voted differently," "Break out of the "echo chamber" and engage in dialogue with people whose opinions differ," "Question your own views - and accept that you may not actually know best."For the first time in these two developed countries there was great consternation after the elections as to why the vote turned out not as those who speak on the media, write on the media and who "direct public opinion" perceived, but in a totally different way.

One expert was asked "What did we get wrong?" That expert succinctly answered "The numbers."

But it is even simpler than this. As we can see in the BBC advice, some sections of society - those that control the media, the university posts, the think tanks - do not really understand the rest of society. There was a revealing paragraph in The Washington Post on Nov. 9: "It is, some voters said, an admission of exhaustion, a collective settling for the lesser of two evils in a country where people increasingly choose not to live near, associate with or listen to those who hold opposing political views. Not quite, other voters said. With or without Trump's extraordinary appeal, Americans were determined this year to send the politicians a message about the pain caused by a decades-long collapse of certainties about what America looks like, what constitutes a family and how we earn a living."

Either way, while some people sent a message, others were just not aware that such a message needed to be sent.

What happened, in brief, is that there was a misreading of the American working class, in particular, those who live in the area known as the Rust Belt. The Rust Belt is the northern section of the U.S., a section in which towns and communities were built around factories. This area used to be known as the Factory Belt and stretches from upstate New York to parts of Iowa. The factories have closed (thus the rust) and people have had to find other means of making a living. Communities that thrived on factory employment have had to turn to agriculture or other alternative means of employment and have to live on a much smaller paycheck. In the Rust Belt industrial growth has been replaced by economic decline and urban decay.

This message, this exhaustion, is not unique to America. In fact, it does not require much insight to understand that what happened last Tuesday is very similar to what happened in Brexit. With the closure of mines, shipyards and the selling off of factories in the U.K., jobs have suffered. Many of the remaining jobs in the factories have been taken by immigrants from Western or Eastern Europe. 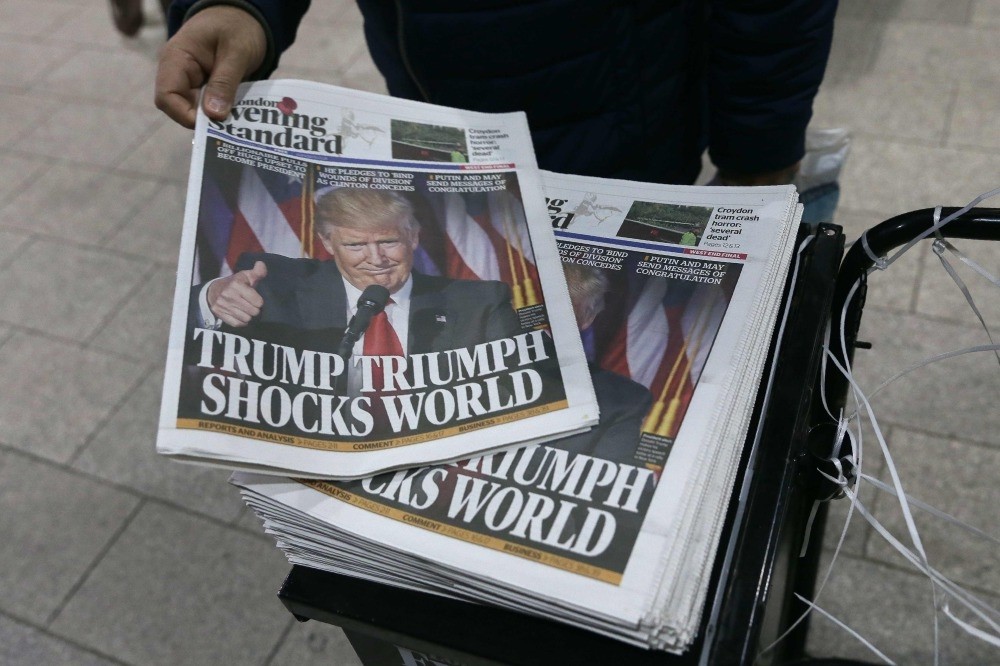 What a long way we have come since the birth of the Socialist left. The left-wing political parties were formed to support the working man, to act as the voice for this salt of the earth. Yet today it is these very parties that are seen by the working man as being far removed from their concerns.

The largest demographic in the U.S. is the white working male - the traditional support of the Democrat Party. But it was this demographic that responded to Trump. It was not always Trump's sexism, racism or hatred that these men - and many white working class women as well - responded to. This is where the intellectual left has got it wrong. Many responded to the economic promises, to the idea of making "America Great Again." These salt of the earth want the happy days of the 20th century. They want the boom time of the great American enterprise. They do not trust Wall Street. After all, it was Wall Street that caused the Global Crisis. It is Wall Street and the establishment that ensured that Wall Street survived the crisis, all at the cost of the working man.

The frustration of the "common man" becomes clearer when we take into account the limitations in the U.S. on joining unions and on the bargaining power of unions. In 26 states, workers either cannot join unions, pay dues or bargain collectively. Unions have always been the pride of the working man.

But more importantly, the unions have been the powerhouse of the left-wing parties. In the U.K. the unions supported the Labour Party, while in

the U.S., the unions historically had a close connection with the Democrat Party, as witnessed by their efforts to get Roosevelt re-elected in 1936.

Left-wing parties today are manned by people who have university degrees, by those who are liberal in their outlook. That is not to say they do not want what is best for the country. They do - they want a progressive, advanced society. Yet they fail to address the real, day-to-day needs of the largest part of the population.

To quote Owen Jones from the Guardian (10/11/2016) "The style and culture of the radical left is often shaped by university-educated young people ... They are a growing and diverse group; often they hail from modest backgrounds. But their priorities, their rhetoric and their outlook is often radically different to older working-class voters in small town England, France or the US....That must change. Unless the left is rooted in working-class communities - from the diverse boroughs of London to the ex-mill towns of the north - unless it speaks a language that resonates with those it once saw as its natural constituency...then it has no political future."

Indeed, it is a truism that throughout the world urban areas are generally left-leaning, while rural communities are more conservative and populist. One need only compare the American election map to the Turkish election map. The rural, agricultural, industrial interior of the country votes very differently from the coastal regions, where those who are educated, who are involved in the media, in politics, in technology, reside.

Perhaps Bernie Sanders summed up what happened on Tuesday best: "Donald Trump tapped into the anger of a declining middle class that is sick and tired of establishment economics, establishment politics and the establishment media.

People are tired of working longer hours for lower wages, of seeing decent paying jobs go to China and other low-wage countries, of billionaires not paying any federal income taxes and of not being able to afford a college education for their kids - all while the rich become very much richer."

At this time, it seems appropriate to dust off two earlier articles from this column, both written after Turkish elections. In the first article, a journalist, who supported CHP, tells her readers, "Go to Anatolia and gez [meaning take a tour or a short holiday]." The implication is that those people who did not vote for the Justice and Development Party (AK Party) councils are foreigners to Anatolia, that they are tourists there. Yet "More than 90 percent of Turkey consists of Anatolia; 50 percent of Istanbul and 100 percent of Ankara is Anatolia." The person who wrote these words and the people whom she is addressing are Turkish citizens of this country. Anatolia is their heart-land.

In the second article another journalist is quoted as saying, "We lost..."

The response is, "Your candidate lost. Your party lost. But 'you' did not lose. You have a local government ... if you want to ensure that it will represent what you want, then make your voices heard in the legitimate places, in the city council, in consultative meetings. Arrange lobbying groups and lobby. Do not incite people to feel side-lined. This was a fair election..."

The first journalist says: "They are with the prime minister. We are on our own."

The response this time is: "This is a dismal depiction of the situation. ... we are in this together; the end result does not change that."

Also, it is important to remember that one should not be tempted to compare the winners in Brexit, the U.S. elections and the Turkish elections. The common man in Turkey for a long time has been downtrodden. The working class, the rural farmers, were deprived of many rights. They were scorned and shunned and marginalized along with the minorities in the country. Thus, when the common man started to win, started to gain a voice, so too did the minorities.

And finally what the common man demanded in Turkey was an end to the long years of bloody terrorism. The AK Party is delivering this. Every move taken in the past 18 months has been to stop the bloody terrorism carried out by the terrorist groups active in the country. No matter what spin certain "left-wing" groups put on these efforts, the people of Turkey (that is, not just the common man, but the people of Turkey) understand that the intention is to put an end to terrorism once and for all.

The fact that the common man has a gripe, that what the working man or woman wants might just be what is best for the country, that these people might just have a legitimate demand, is a message that needs to be understood in America. As quoted above "Question your own views - and accept that you may not actually know best."

Perhaps you did not vote for Trump. Perhaps you never imagined a world in which he would win. But he did. And you are citizens of that country. The polarization in America can only be overcome if the left-wing parties lead the way. One responsible politician, that is Bernie Sanders, says: "To the degree that Mr. Trump is serious about pursuing policies that improve the lives of working families in this country, I and other progressives are prepared to work with him." This is a unifying message.

Of course, Mr. Sanders is absolutely correct in adding the following caveat:

"To the degree that he pursues racist, sexist, xenophobic and anti-environment policies, we will vigorously oppose him."

For citizens in the U.K. and the U.S. (and those in Europe who are facing elections in the near future), it falls to you to work together, to ensure that whatever the election results the best-interests of the country, and the world, are brought to the fore. Work to reduce polarization. Work to increase understanding. Now that we have President-elect Trump we can only hope that the hate will be allowed to fade. Both sides must help it to do so.
RELATED TOPICS