Islamophobia and terror at the heart of 'Islambol' 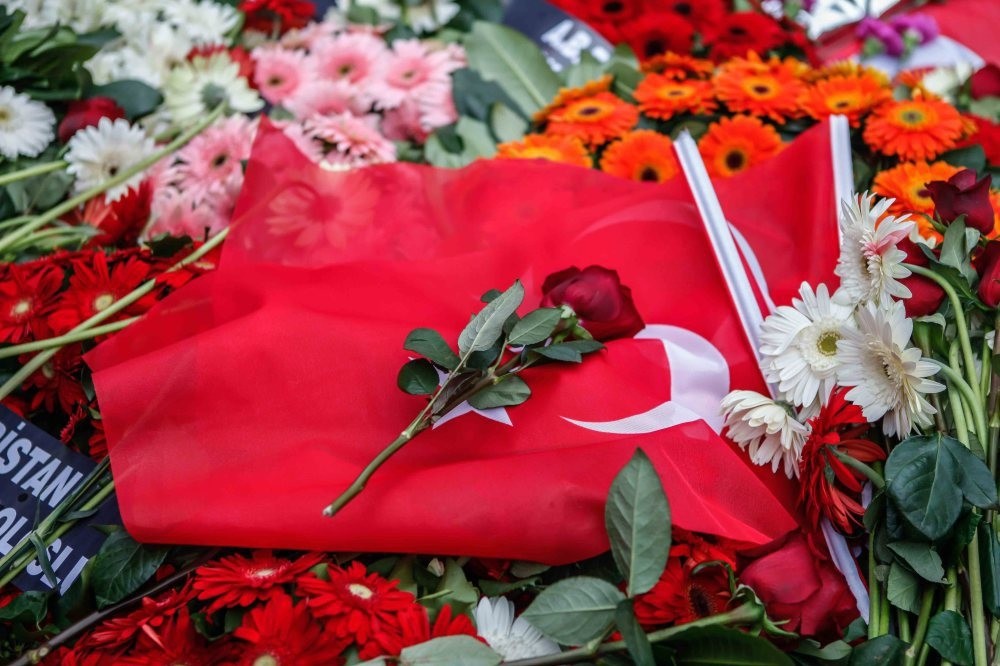 Locals paid tribute to the victims of the recent terror attack in Beu015fiktau015f by leaving flowers and Turkish flags at the scene.
by Fatima Abushanab Dec 15, 2016 12:00 am

The rising prevalence of Islamophobic tendency and terrorist attacks around the world makes it necessary to scrutinize Islamophobia, whose roots predate the modern terrorism period. Acting as an advocacy voice, Turkey has mobilized to defeat terrorism within its belief and stable state systems

The terror attack that struck Istanbul a few days ago is a tragedy that could have taken place in any part of the world. According to the experts, Turkish police worked diligently on averting such attacks and many times, as reflected in the media, they did, but this time it came knocking on our door at the heart of a robust international city. The agony over the deaths of our innocent police officers and civilians - for now, 44 - continues to loom over Turkey.

Given the state of Muslim communities around the world, there are many reasons inadvertently pushing us to become more aware of the dangers we are facing under prejudice, discrimination and hate crimes. Even though it has always existed throughout world history, Islamophobia has become more ingrained in our current global reality.

Taking a closer look out our region today, the recent terror attack on Istanbul, in addition to the countless attacks over the past year, begs the question of how terrorism has become the instrument for Islamophobic attacks targeting Turkey and its surrounding region.

In Turkey's case the terror attacks are not coincidental but are planned according to developments aimed at strengthening the core mechanism of a nation-state: the presidential system. Within the span of a few days Turkey made a huge milestone by taking concrete steps to finally realize the presidential system. Two important parties, namely the Justice and Development Party (AK Party) and the Nationalist Movement Party (MHP), took strides to solidify this historic change. This marks a critical period in Turkey's history because the presidential system is a precursor for advancing the nation-state project in the 21st century. This is not the first time Turkey witnesses this attempt. Former presidents Turgut Özal and Süleyman Demirel talked about the exigency to undertake a transition to a presidential system, but never really caught the momentum to make it possible. Today, this dream is no longer impossible, but is actually feasible. And we can only imagine it was coincidental that merely a few hours into the Parliament taking this critical issue on its agenda, bombs went off.

Turkey, which has been a competitive market over the past decade, is rapidly emerging as an effective and prominent country that aims to exert its leadership based on "its own terms." Here, Turkey is playing a "challenger" role to change the rules of the game. Instead of watching the world succumb to ample injustice occurring around the region, Turkish leadership is putting out an "advocacy voice," one that stands against all kinds of terror.

So what exactly is the connection between Islamophobia and terror?

Historically speaking, this hatred trend took off with the repercussions of 9/11 terror attack that left many Muslims around the globe under threat and trepidation. If we look at Islamophobia's symptoms we can conclude that it is something that predates the modern terrorism period. It is a far deeper issue than we can imagine and once considered in its historical context, Islamophobia's manifestation is rooted in something much greater, the enlightenment era.

While the positive aspects of enlightenment are taught throughout the West, our education systems tend to overlook the schism this new era brought to an exemplar country like post-Ottoman Turkey. The French concept of "laicity" the early Republic adopted as part of its strict separation of the church and state resulted in major backlash throughout decades.

The AK Party coming into power eased this tension by offering a new relationship between the church and state concept. In this endeavor, the Turkish society came to identify and logically accept cooperation between state and religion by arguing there is no contradiction similar to the Anglo-Saxon understanding of secularism. This allows religion and state to be congruent.

The limit to how much state and religion can or should interact with one another is debatable. However, at this current stage in Turkish politics, a disparaging factor has led to religion and state to act in closer proximity with one another and yet for the better.

As we continue to see the rise of Islamophobia, Muslim-majority societies will find their defense mechanism within their belief system as seen in Turkey's case. Meanwhile, Western governments will continue to resort to wishy-washy statements to condemn terrorism but not fully take the decisive position to denounce the PKK as a terrorist organization or in an identical case show resistance to identifying the FETÖ, as a terrorist group. After all, we are certain that the West was never keenly behind Turkey's war against terror. The West chose to differentiate among terror organizations and this will certainly come to haunt many of us in the future as past lessons have taught us.

This Islamophobic tendency prevalent in Western democracies is not just limited to the process of distinguishing between terror organizations. Counterterrorism is also ascribed for a double standard. The Turkish State of Emergency, unlike that of France, has been under tough scrutiny. Needless to say the duplicity continues to be a deep-seated issue stoking the spread of Islamophobia.

The terror attacks from the PKK, Daesh, FETÖ, the Revolutionary People's Liberation Party-Front (DHKP-C) and many more create a unique case study to understand Turkey's struggle against terrorism. No matter how Westernized Turkey may be, its democratic ethos is deeply embroiled in the historical struggle of becoming its true self. In this aim, terrorism has always been the major impediment to this Turkish dream. In this respect, the July 15 terror attack against the nation came to be known as the second independence struggle because it was the nation's call to rejuvenate itself for the second step in the nation-state project, the fight for democracy and freedoms and the presidential system that will sustain stability and safeguard individual rights. In this context, the more disparate factions, namely the PKK, FETÖ, Daesh or others attempt to weaken Turkey, in the long run, it will only mobilize the nation into an arduous counterattack to defeat terror by not only the means of religious unification and performance, but also a strong and stable state system.

The July 15 and Dec. 10 martyrs are important reminders for all of us. Religion is ubiquitous and it is here to stay. Islamophobia and the terror attacks from unfair political criticism to pressures from Western governments will only strengthen and create a more outward, unified Islamic character of Turkey.

If Turkey's endeavor to become the beacon of the Muslim world does succeed albeit with difficulty in assured steps, no doubt, we will see a more proactive Turkey in the Middle East region. This will only be the beginning of a new change, a new kind of enlightenment in the chapter of global politics.
RELATED TOPICS