When will we learn? 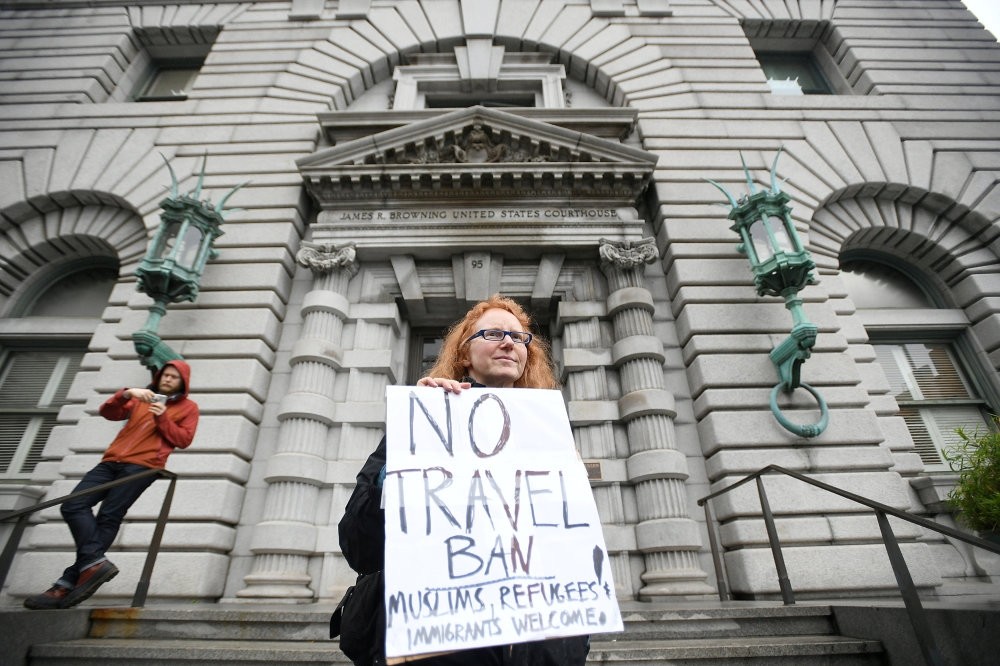 Author Beth Kohn protests against the travel ban, outside the 9th U.S. Circuit Court of Appeals courthouse in San Francisco.
by Jane Louise Kandur Feb 11, 2017 12:00 am

The history of refugees - people fleeing wars, persecution, or even just plain hunger - is long and complicated. This is a story that is not only on the agenda today, appearing in news throughout the world, but it is a story that is also very personal

While my mother's side of the family lived in South West England as far back as the 14th century - same village, probably even same street and house, my father's family resided in France in the 18th century. From what we have learned my paternal grandfather's family were upper class, but not aristocrats (bureaucrats, basically). Come the French Revolution at the end of the 18th century, things became uncomfortable for them, and they left for Belgium. They stayed in Belgium for quite a while before emigrating to Germany.

My paternal grandmother's family came from the Baltic states, but had probably immigrated there from Pomerania. This family, Jewish by race and religion, ended up in St. Petersburg at the end of the 19th century. Here they converted to Christianity, not out of any religious fervor, but rather because it made their day-to-day life easier. My great-grandfather was an optician and had his own shop.

Life in St Petersburg was good, according to my grandmother's memoirs. But then, in 1917 there was yet another revolution, this time the Bolshevik Revolution, and this side of the family found that they, too, had to leave for another city. Being bourgeois, St. Petersburg was not a place where they could raise their three daughters safely.

They selected Berlin, which is where my grandfather and grandmother met and married. My grandfather was from a Christian background, my grandmother was Christian on paper, but Jewish by race. Everything was fine for a while. Born in 1929, my father has some pleasant memories of childhood in Berlin. But by the late 30s things weren't going so well. He had a passport with a J on it, with one cross through it, indicating that he was half Jewish. He couldn't go to his very avant-garde school any more, and eventually he was sent to Switzerland to stay with a family there. He remembers trying to board the train to go to Switzerland, and the guard obstructing his way, saying he could not travel with his passport, due to the crossed-out letter J. The passengers on the train saw some police making their way down the platform. Quickly, ignoring the protests of the guard, they grabbed my father's arms and bodily pulled him onto the train.

Why was an eight-year old boy traveling on his own? His mother, grandmother and aunts had already left. His mother was in the UK, where she worked as a maid. Although a highly-trained laboratory technician, my grandmother could only stay in the UK if she was employed by a family as a maid. My father's aunts had gone to other countries. One aunt, Nina, went to Denmark and throughout the war helped smuggle Jewish children to Denmark and Norway. She led the children over treacherous terrain, making the entire journey on skis. The school she set up continues today, and she is revered in Denmark as someone who risked her life for the lives of others. My grandmother and other aunt went to New York. My aunt, my father's older sister, was in boarding school in Holland.

This is the story we grew up with. A family torn apart by war. A family running, however they could, to save their lives. My father had a pleasant time in Switzerland. But then it was time for him to go to school. The year was 1939. It was decided that he should go to Holland, where his sister was, and join her in the boarding school. But first, being summer, both children were bought tickets to go visit their mother in England.The children spent an uneventful summer in the U.K. Then in September my aunt and father got ready to go to Holland, where my father would start school. The day they were to leave, Britain declared war against Germany. No ships were leaving. My father was stranded in a land that spoke a language he did not know.

He was allowed to stay, as long as someone agreed to sponsor him. Some friends of my grandmother agreed to sponsor him and he was sent to a boarding school. He was officially registered as an "enemy alien". An eight-year old boy. A boy who would have been sent to the camps in Germany if he had not been allowed to stay in the UK. This young, frightened, innocent refugee was only accepted because he could find a sponsor. And he was labelled an enemy alien.

This, as I said, is the story that we grew up with. We had no rosy notions of British open door policies. We were aware that so many strings had been attached. Certainly between 1938 and 1939 the Kindertransport program allowed for 10,000 unaccompanied Jewish children to enter the country on an emergency basis. After November, 1939, that is, after the pogrom known as the Kristallnacht, there was a loosening in British immigration policy. But still, any Jewish refugee had to be guaranteed by the Jewish community. In fact, most of the Jewish refugees were taken in to work in low-paid jobs that the British did not want to do. Not much has changed; today most immigrants in the UK are doing jobs that are low paid and lacking prestige.

The new refugees were encouraged to speak English as quickly as possible. My father learnt English in record time, and anyone hearing him speak today cannot detect any trace of an accent; there is nothing to give away that he was not born and bred in the U.K. We often heard how he told his mother not to speak in public, to speak only English on the bus and to, PLEASE, work on her accent. My poor grandmother had grown up speaking Russian, had learned German, and then was expected to learn yet another language, and speak without an accent. She didn't even bother to tame her German accent, and she died, at the age of 85, speaking with a full-blown German accent and not caring if she was right or wrong in how she framed her sentences.

What has spurred me to write about my father, a man who is living in the U.K. today, alive only by chance? Born in the same year as Anne Frank, my father, unlike her, survived. I have been asked to tell his story many times, but what has made me set it down here today is, of course, Trump. The ban on immigrants hits at such a personal place that it hurts. What drove it all home was the arrest of approximately 20 rabbis last Monday in New York City. They were arrested for blocking traffic, which they did while protesting outside Trump Tower. They were protesting the Trump ban on immigration of Muslims from seven countries. One of their motives was humanity - no one should be banned from entering America because of the country they were born in or because of their beliefs.

But the rabbis had a deeper-seated motive. Rabbi Jill Jacobs said "We remember our history, and we remember that the borders of this country closed to us in 1924 with very catastrophic consequences during the Holocaust. We know that some of the language that's being used now to stop Muslims from coming in is the same language that was used to stop Jewish refugees from coming."

The ban during World War II made it impossible for many Jewish families to travel to the United States. One family that tried to come, but failed was the Frank family. Anne Frank is famous today because of the diary she wrote during the Nazi invasion of Holland. Her father tried to get into the United States, but there a number of regulations that made it difficult for them. He obtained a Cuban visa in 1941, but when the U.S. entered the war, the visa was cancelled. It was after this, in 1942, that the Frank family went into hiding. The family was eventually discovered, and Ann and her sister died of typhus, while their mother died of starvation.

The people in America at this time were not outraged that the government was preventing Jewish refugees from coming. The country was recovering from the Great Depression, and there was a fear that the refugees would take any of the scarce available jobs. Also, according to a 2015 editorial in the Washington Post, "Jews were viewed as harbingers of dangerous ideologies, particularly communism and anarchism....There were pronounced fears that fifth columnists and spies would infiltrate the country through the tide of refugees fleeing fascist Europe." Sounds very familiar The name of the act that introduced restrictions on immigration was the Johnson-Reed Act. This was a federal law that limited the number of immigrants who would be admitted to the U.S. to 2 percent of the number of people from that country already living in the U.S. This ban hit the Europeans hard; but Africans were even more severely restricted and Arabs and Asians were absolutely banned. The idea behind this, according to the Office of the Historian of the U.S. Department of State was "to preserve the ideal of American homogeneity."

There are estimates that around 200,000 Jewish people could have been saved during World War II if such bureaucratic obstacles had not prevented immigration.

But America's shame in World War II is not limited to Jewish immigration. After Pearl Harbor was banned, people living on the West Coast of America who were of Japanese descent found themselves put into concentration camps. Around 62 percent of these people placed in these concentration camps were American citizens. Even people who were only 1/16th Japanese were interred.

In 1980, President Jimmy Carter had an investigation opened to establish whether the Japanese Americans who had been interred had actually posed a threat. A commission, the Commission on Wartime Relocation and Internment of Civilians, found that there was little evidence of Japanese threat or disloyalty. The conclusion was that the internment of these people was basically due to reasons of racism and bigotry. Reparations were paid by Reagan's administration; it was stated that the internment had been based on "race prejudice, war hysteria and a failure of political leadership." In today's terms, this cost the government over $3 billion.All of this is a lesson. We are supposed to learn from history, but seem condemned to relive and relive the most shameful moments of it. I come from a family of refugees, a family scarred by war and bigotry. I have a number of friends here in Istanbul who are being scarred by the same wars and the same hate. And now I have friends in America who are being threatened by bigotry and discrimination. Will we ever learn?
RELATED TOPICS