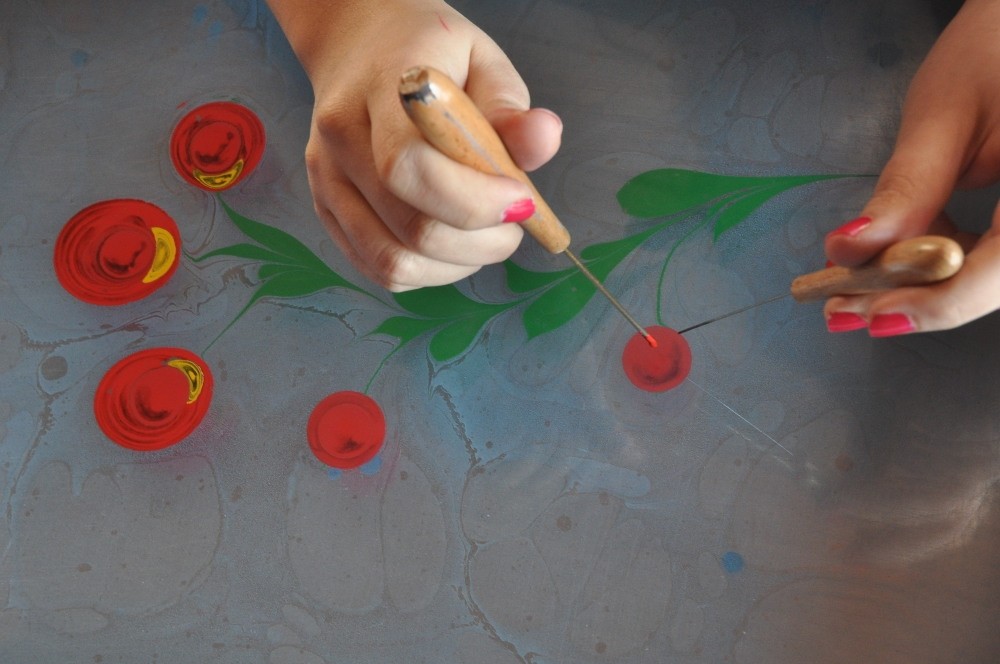 The students take courses in marbling, a UNESCO intangible world heritage.
by Anadolu Agency Feb 23, 2017 12:00 am

Students who travel from all around the world to study in Turkey as foreign exchange students on Turkish scholarships are not just studying but are also broadening their cultural knowledge by learning classic Turkish arts, with guitar courses adding the spice of music to their repertoires

Azize Kurt, who works at Turkish Scholarships Ankara office said, "The cost of students' education and living expenses are already covered with Turkish scholarships. We opened this art workshop to encourage students to improve their artistic knowledge while broadening their horizons with Turkish art forms. We hope they will continue to use the skills they acquire here after they return to their countries." 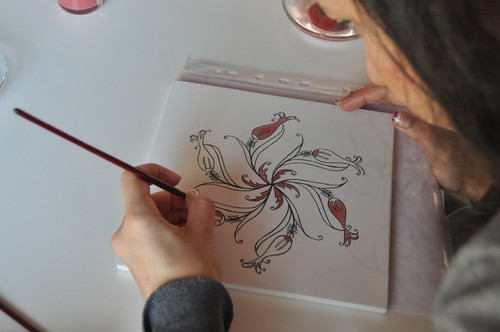 Along with modern ceramics, students also work with traditional Turkish designs such as tulips and flowers, creating these motifs on plates, magnets, chinaware and large and small tiles. A Serbian student attending courses in Turkish art, Zehra Skrijeli is currently undertaking doctoral studies in art history at Hacettepe University. She spoke about her visit to the İznik district of Bursa for an Erasmus+ project, saying that she fell in love with the tulip designs she saw there, compelling her to work on mastering the motif.

Uzbek Dilshod Rahmatov, a graduate student in international relations at Yıldırım Beyazıt University said that he has created an art piece that resembles the traditional "cotton" figure of Uzbekistan, adding that he believes these courses have helped him improve his handicraft skills.

Turkish artist from the Ministry of Culture Songül Sönmez, who teaches students the art of marbling, said that the art form is an old tradition with Turkestan and Persian roots, noting that the Turkish word for the art form -- "ebru" -- means "looking like a cloud" in Farsi. Expressing hope that international students will continue their art studies after learning ebru in Turkey, Sönmez said that through these courses the prevalence of this old Turkish art form will expand to other continents: "Thanks to these courses at the International Students Academy, we are building a 'culture lobby' across continents. The Turkish art of water marbling is our own unique art, and both the artists and Turkey's Ministry of Culture place special value on this form of art. Marbling is already listed on UNESCO's Intangible Cultural Heritage List," said Sönmez. 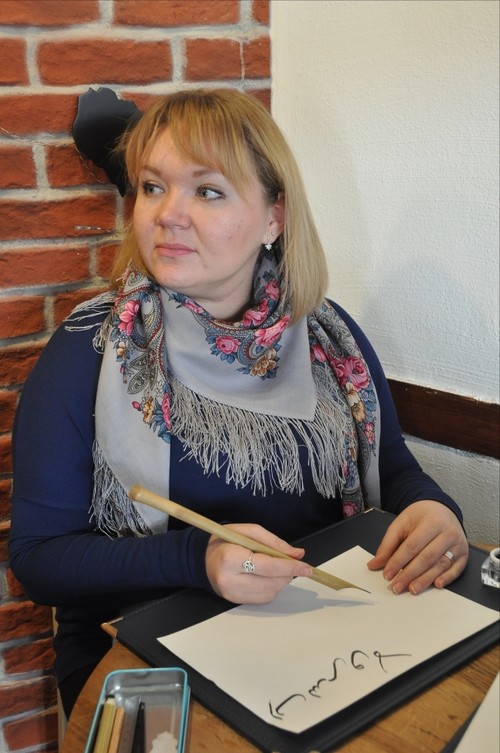 A foreign student learning calligraphy at an art workshop

She noted that the tulip shape is very popular with students and has become the symbol of ebru: "One side of the tulip looks at the world, the other after life. It has one stem, which symbols the unity of God," said Sönmez. She also mentioned that in the Ottoman times, marbling was used as a form of treatment for psychological illnesses.

Russian calligraphy student Olesya Gorbunova is also pursuing doctoral studies in public relations and promotion at Ankara University. She says she chose calligraphy to better understand Turkish and Islamic culture, affirming, "Calligraphy is a very aesthetic art form. It requires patience and precision. I was interested in Western calligraphy for a while but the calligraphy in mosques caught my attention. Learning calligraphy expands our horizons."

Fellow graduate student in the department of public relations and promotion, Pakistani Khola Younas Ansari, added that calligraphy was a very popular art form in her country, so when she realized there were free courses she wanted to attend.

Giving lessons in watercolor painting is Ayşe Eylül Sönmez, who is also pursuing her master's degree at Gazi University's department of art education while continuing her studies at Hacettepe University. She provides free lessons to students on Turkish scholarships, saying that students from all around the world are brought together by this universal interest.

An exhibition featuring student works will be held after the courses are completed.
Last Update: Feb 23, 2017 1:27 am
RELATED TOPICS