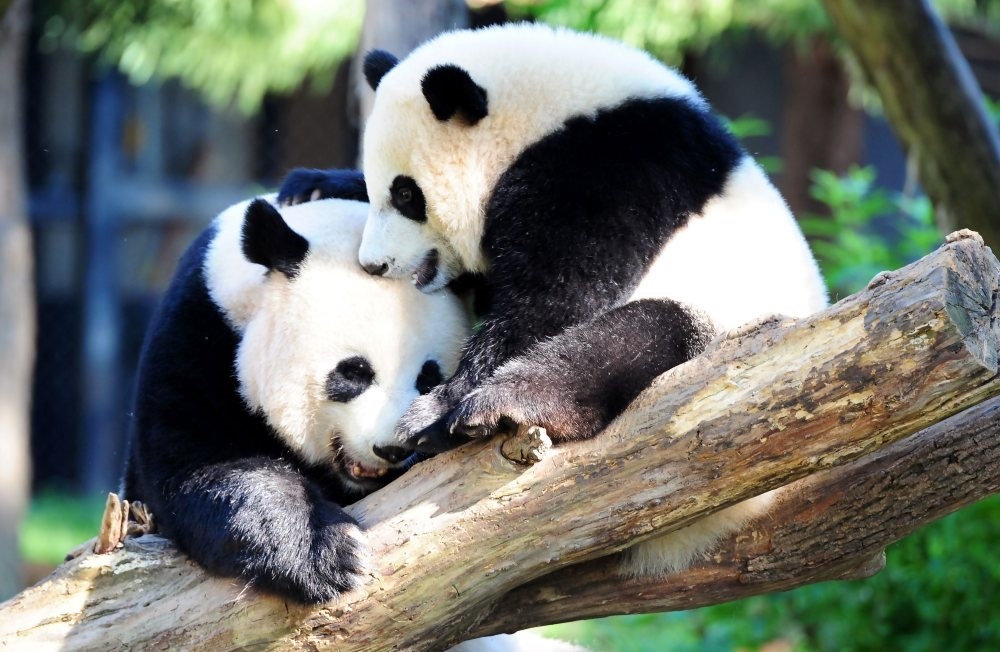 Giant panda Mei Xiang and her cub Bei Bei (R) play in their enclosure at the National Zoo in Washington. (AFP Photo)
by Jane Louise Kandur Mar 04, 2017 12:00 am

A killing in El Salvador has made headlines. El Salvador has one of the highest murder rates in the world. So why has one murder made such waves? All of El Salvador is mourning the death of the beloved Gustavito, a zoo hippo, tortured and killed by unknown assailants

It is not unusual for the inmates of zoos to become internationally famous. There are heroes, for example Binti Jua (Daughter of Sunshine), a gorilla from Brookfield Zoo in Chicago. Others are seen to be anti-heroes, for example Harambe, a gorilla at Cincinatti Zoo. Yet others, like Gustavito, are victims.

Zoos give people, children and adults, great pleasure. Everyone who has visited a zoo understands the fascination that these animals create in us.

As far as we know, the first zoo was established by Shulgi, who ruled over Ur (South-East Iraq) in 2400 BC. In 1500 BC Queen Hatshepsut also established a zoo in Egypt, where animals collected from the entire African continent were on display. The Garden of Intelligence, a zoo that covered a massive area of land, was built by Emperor Wen Wang in China. The oldest zoo that is still functioning today is in Vienna, first built by Emperor Franz Josef in 1752.

Zoos have changed from their original inspiration, which was dual in purpose. The original idea of the royal zoo was to entertain the courtiers with outlandish creatures, while demonstrating the ruler's power and wealth. Today, zoos are not just for entertainment. One of the first examples of this new attitude to zoos is London Zoo. London Zoo, located in Regent's Park, was originally designed to be a scientific zoo. Opened in 1828, by 1847 the zoo was open to the public.

In recent decades more and more efforts to educate and protect have come to the fore. Animals are no longer being wrenched from their native environment to be placed in a cage for our viewing pleasure. Most of the zoo animals today inhabit large enclosures, which are close in vegetation and terrain to their native lands; most have been born in captivity. Animals, in particular pandas, are bred in captivity, raised to be able to survive in the wild and then reintroduced to the wild. The results are not always positive. Although the first panda to be released died shortly within a year, China has reintroduced seven pandas into the wild to date.

Some inhabitants of zoos have become famous, sometimes even gaining international fame. For example, when the Smithsonian Zoo installed a webcam, Bao Bao become the most famous internet panda cub. Considering how popular pandas are on the internet, this is saying a lot. Last year, as part of the Panda Diplomacy, Bao Bao returned home to China, where she was released into the wild.

Another zoo animal who became famous is Binti Jua of Brookfield Zoo, near Chicago. Binti Jua hit the headlines in 1996, when a three-year old boy fell over the wall surrounding the gorilla enclosure. The toddler fell 7 meters, and lay on the ground unconscious. Binti walked over to the child and cradled him. When her keepers entered the enclosure, she gently laid the boy on the ground. The boy was rescued, and made a full recovery.

After this event, Binti Jua was given special treats and food as a reward. However, there was debate among experts whether Binti Jua acted this way because she had been trained by the zoo to take care of her offspring or whether it was something inherent in gorilla behavior. Other apes, for example the gorilla Jambo in Jersey Zoo, have also protected children who fell into their enclosure.

But not all stories of animals in captivity have such happy endings.

Perhaps one of the most famous and tragic stories of zoo inhabitants is that of Marjan. A lion at the Kabul Zoo in Afghanistan, Marjan became a symbol of the fate of Afghanistan. In 1978 Marjan was given to the country, already war-torn, by Germany. Dying in 2002, Marjan witnessed the tragic journey of Afghanistan, from Communism, to the Saur Revolution, invasion by the USSR, civil war and finally the arrival of Western forces. 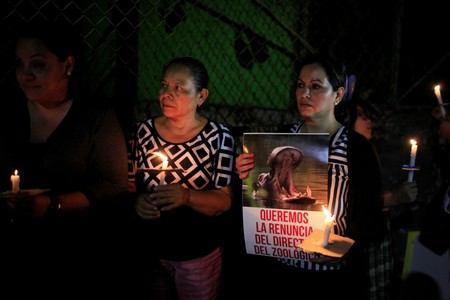 Marjan also suffered personally. In 1996 a man illegally entered Marjan's cage and tried to touch him. Marjan, as lions do, killed the man. The man's friends wanted revenge, and threw hand grenades into the lion's cage. Marjan survived, but was now blind and deaf.

When Western forces entered Afghanistan Marjan's conditions became a cause célèbre. Animal rights organizations mustered forces to help the poor lion in the Kabul Zoo. Marjan died in January 2002. He has a grave in the zoo, on which is written: "Here lies Marjan, who was about 23. He was the most famous lion in the world."

Then there is the shocking story of Topsy, an elephant. Although a circus elephant, and not living in a zoo, her story seems to fit in with today's theme. Topsy was known as a "bad" elephant, and her story probably inspired some sections of the film Dumbo. In 1902 she killed James Fielding Blount. It is thought that Blount had taunted the elephants, throwing sand in Topsy's face and burning her trunk with a cigar. In response, Topsy simply crushed the man.

At the time, this event created huge publicity and crowds of people turned up at the circus to see Topsy. At this time, the idea of animal rights was just blossoming, and many saw nothing wrong in taunting a wild animal. In the same year as the above incident, another man tried to "tickle" Topsy behind the ear. Topsy grabbed him with her trunk and threw him to the ground. The man survived, but Topsy was sold to Coney Island. Topsy was put to hard labor and had to help move heavy objects.

The fact that her handler, William Alt, was often drunk did not help. At the end of 1902 Alt rode Topsy down the streets of Coney Island and tried to make her storm the local police station. The police officers were so frightened that they hid in the cells.

Topsy's owners decided that they could no longer handle the handler nor the elephant. But with this reputation, no one wanted to buy, or even take Topsy. The owners announced that Topsy would be hung; they would sell tickets to anyone who wanted to watch. However, the American Society for the Prevention of Cruelty to Animals waded in and said that hanging the elephant would be a "needlessly cruel means of killing" and forbade the owners from holding a public spectacle. In the end, Topsy was electrocuted, watched by specially invited guests only.

We would like to think that we have come a long way from 1902. However, the shooting of Harambe last year, a silver-back gorilla who reacted badly when a small boy climbed into his enclosure, led to many questions. Was the gorilla really going to hurt the boy? Jane Goodall's first expert statement was that Harambe was not expressing violent behavior, but was rather just confused. Yet authorities acted swiftly, as a human life was in the balance. There is still a debate about whether Harambe's life should have been so swiftly taken.

There are a number of incidents that make us question if we really have advanced that far from 1902, when the execution of Topsy was seen to be entertainment. The death of Tatiana the tiger, a resident at San Francisco Zoo, who was probably taunted by her victims before she hunted them down, is a case in point. San Francisco has a law against taunting zoo animals. The fact that we still need a law to protect caged animals shows us the depths that human depravity can take.

Gustavito is another example of this very evil side of human nature. A hippo beloved by children and adults alike in El Salvador, a country which knows little joy and much violence, was stabbed and beaten one night. His keepers discovered that Gustavito had been injured when the hippo refused to come out of his pool. Upon examination, they found evidence of the attack; unfortunately, the veterinarians were unable to save Gustavito's life.

In the wild, hippos are animals we fear; they can easily kill people, and are extremely territorial. Yet here we have the tragic story of an animal in an enclosure who was beaten to death by what was probably more than one person.

Zoos are important places for education and research. Perhaps it is time that zoos do more outreach programs, educating school children everywhere on cruelty and the rights of the animals that we live with, whether they be in nature, in the street, in the home or in the zoo.
RELATED TOPICS