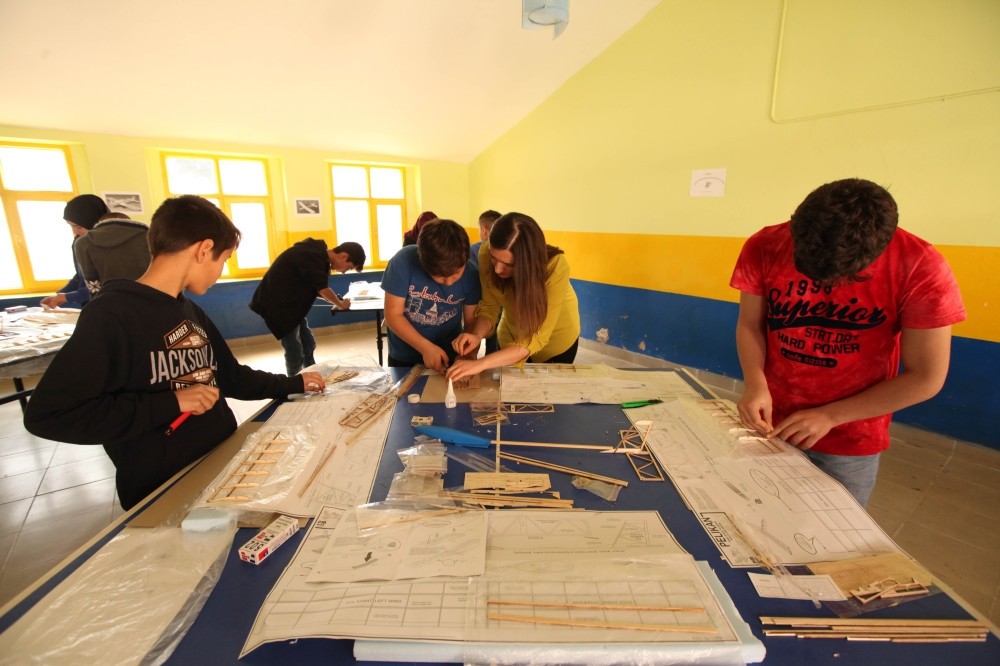 Students of u015eehit Arif u00c7etin Secondary School work on their model plane project under the supervision of their teacher.
by Daily Sabah with AA
Mar 16, 2017 12:00 am

Inspired by legendary Turkish aviator Vecihi Hürkuş, who was a war hero as well as an entrepreneur, students in the Black Sea town of Samsun are working on model planes, dreaming to design their own aircraft one day

Turkish pilot, engineer and entrepreneur Vecihi Hürkuş, the first Turk to design and build an aircraft, has inspired young generations for decades.

Fatma Akyürek, a math teacher in a school in Samsun's 19 Mayıs district, volunteers as an after-school teacher offering model airplane courses to children as part of the "Küçük Vecihiler Yetişiyor" (Raising Little Vecihis) project to support the education of her students.

Akyürek began the project at Şehit Arif Çetin Secondary School in the district's Karagöl Quarter after being inspired by the late aviator Vecihi Hürkuş, one of the most important names in the history of Turkish aviation; she hoped to contribute to the development and education of students living in rural areas across Turkey. 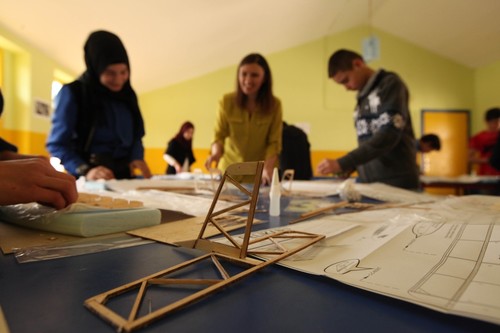 Speaking to Anadolu Agency (AA), Akyürek said she aims to prepare students in local village schools, who have never been on a plane or seen one before, for the future.

Akyürek emphasized that she began to offer model airplane training courses to students at the school after her project was approved by school administrators, saying: "I wanted to make sure that students living in rural areas make the most of their free time in a fully beneficial way. Thus, I endeavored to impart to these children the love of aviation at the same time."

Akyürek pointed out that she volunteered to launch the project to help prepare children for the future, while contributing to the furthering of their achievements, adding that the students have acquired various skills such as measuring and evaluating, making calculations, drawing and improving their hand-eye coordination skills, while making model airplanes.

Saying that children have expressed a lot of interest in her model plane course, Akyürek said, "We care about this project because we are contributing to children's socialization, while ensuring that their free time is well-spent." Indicating that students learn measurements before starting to build the model planes and later going on to do measurements and calculations according to the prepared project, Akyürek noted that once the parts are dry, they make the cuts and assemble the plane accordingly, and while using mathematical data, they try to calculate the laws of physics necessary to fly the planes.

"While performing all these key steps, the children assemble thin sticks and glue them together, which contributes to the development of their hand-eye coordination skills," Akyürek said. "We see this course not only as a model aircraft installation. At the same time, we are preparing our students for the future. Their practical intelligence develops along with their numerical intelligence," she said, asserting that she trains the children in her own school on weekdays and the children in other neighborhoods on weekends.

Reyhan Demir, a seventh grader who participated in the course, pointed out that she has never seen any airplanes in her life but gained knowledge about how planes are flown thanks to the course. She noted that apart from making use of the children's spare time, the course also serves as a source of rehabilitation for them.

Sixth-grader Muhammet Ali Köse asserted that the course motivated him to establish new goals for his future, saying that the course inspired him to become an aircraft engineer and pilot. School Principal Ahmet Elibol noted that opening such a course in their school is very important for the development of the students, adding that 12 students attend each course and the current three-week courses will continue until the end of the year. 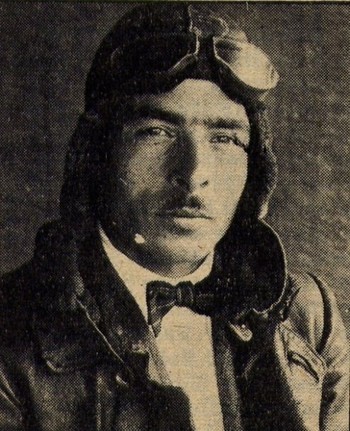 Born in the late 19th century in Istanbul, Hürkuş made a name for himself during WW I fighting for the Ottoman Empire. Hürkuş, Turkey's most celebrated aviator, enrolled in Tayyare Mektebi, the Ottoman aviation school during the early days of that war. He was the first Turk to shoot down enemy aircraft on the Caucasus front and the first to fly a twin-engine aircraft. He was a prisoner of war taken hostage by the Russians, but he managed to escape through Iran.

Following World War I, he joined the Turkish War of Independence and shot down Greek war craft, making history. Turkish Parliament presented him with the Medal of Independence for his accomplishments during the war and gave him three letters of appreciation. Hürkuş is the only person to receive three letters of appreciation in Turkish history. When the fight was over, he rented a mill to build his own aircraft, using old parts from World War I aircraft. On January 28, 1925, Hürkuş flew his own production aircraft: "VECİHİ K-VI." However, he was punished by the authorities, as he did not have permission.

The funny thing was that there was no official institution available to give Hürkuş permission to fly his plane. In 1930, Hürkuş built his first commercial plane; however, he was again unable to receive a permit. He transported his design to Czechoslovakia, received flight permission there and returned to Turkey using his plane. In 1932, he opened Turkey's first Private Aviation School, and in 1954, he founded the first private Turkish airline: "Hürkuş Airlines." During his career as a pilot, which spanned 52 years (1916–1967), Hürkuş flew 102 different aircraft models and spent 30,000 hours (3.4 years of his life) in a cockpit. In 1994, he was honored posthumously with the International Civil Aviation Organization's (ICAO) 50th Anniversary Award (1944-1994) for the considerable contributions he made to the field of civil aviation in Turkey.