European ideals under threat as radicalism continues to plague politics 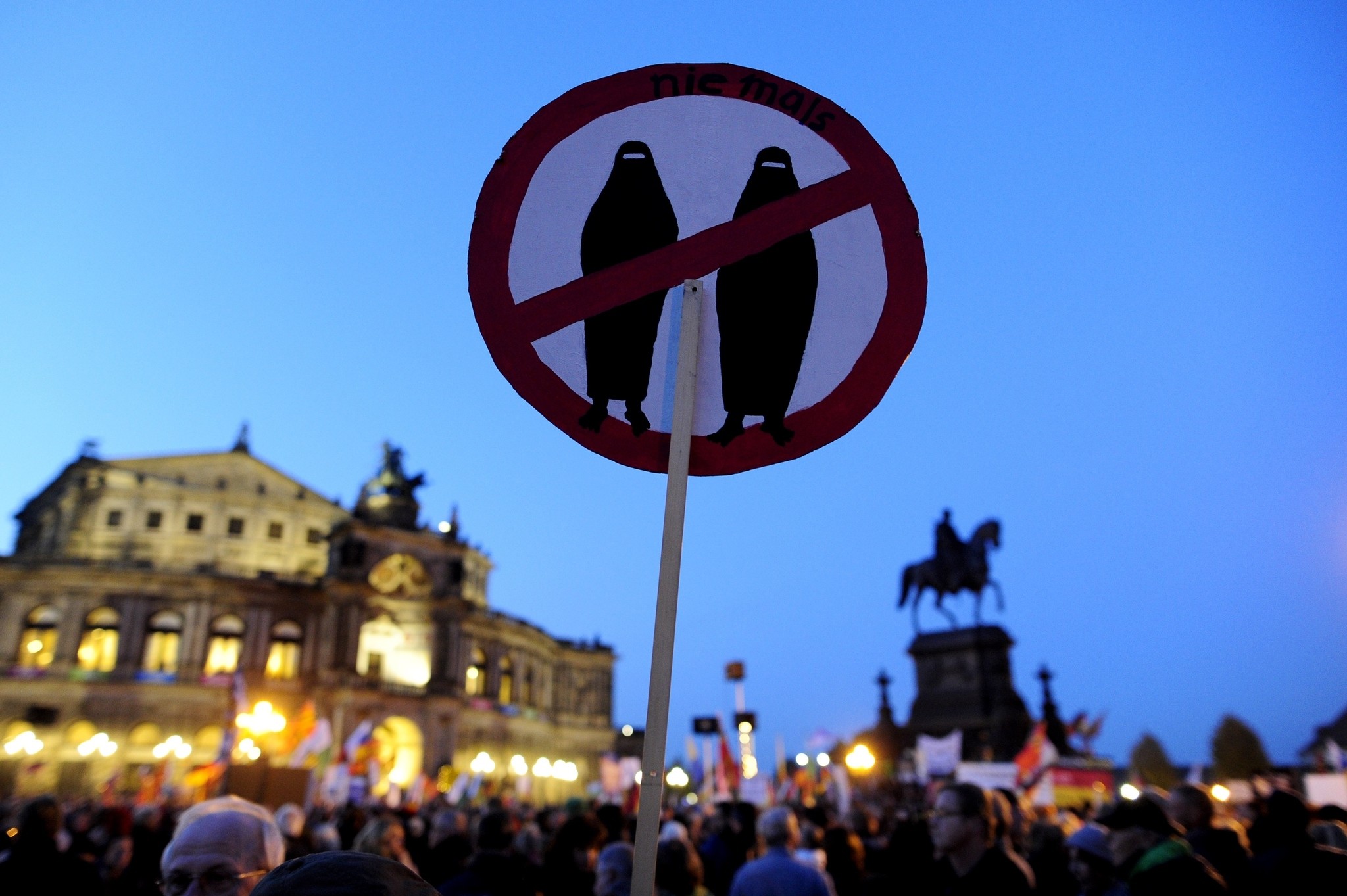 A supporter of the Pegida movement holds a poster featuring a crossed sign on veiled women at a protest rally in Germany.
by Ayşe Şahin Mar 20, 2017 12:00 am

The far right in Europe is living its heyday once again since World War II. With rising security concerns as well as the fear of refugees, Europe has become like the states it has been criticizing for a very long time

One conspicuous form of backlash to globalization that is currently under serious attack has undoubtedly been the ascent of far-right extremist movements across the world – most strikingly in Europe. With the domino effect of Brexit and the election of U.S. President Donald Trump, populism and ultra-nationalism are now engulfing the EU member states, bringing the bloc on the cusp of a collapse, turning the balance of politics on the continent over on its head and marring the inclusive texture of Europe – which has for decades been considered the safety hub for migrants from all over the world. In what appears to be the revival of inter-war nationalism, the values that Europe has touted for decades are now fading in the distance behind far-right extremism that continues to gain momentum.

Europe gives in to the far right

Europe's far-right extremist parties are now enjoying a rise in popularity unheard of since World War II, making sizable gains at the polls as the general public's dissatisfaction with the present establishment continues to swell. What was once considered inconceivable and downright appalling is now genuinely happening in Europe. Even worse still, the unthinkable is becoming the norm. Security concerns amid the rise of terrorist attacks, coupled with a shrinking economy, have paved the way for the rise of far-right parties among Europeans seeking comfort in the protectionist policies of the radical right. Gripped by the fear of their losing jobs to "newcomers," an overwhelming majority of citizens now latch onto the pledges of far-right politicians, desperate to keep the refugees out. Even further, Europe's politicians are pandering to the public's xenophobic sentiments, opting to turn these fears into electoral opportunities rather than alleviate them. Now, more and more far-right politicians are becoming vocally anti-Muslim and, even worse, spawning followers from centrist parties who, blinded by hopes for electoral gains, also resort to a populist discourse.

One major indication of this came in the wake of Wednesday's parliamentary elections in the Netherlands. Dutch prime minister and leader of the liberal conservative VVD party, Mark Rutte issued a message to the country's citizens ahead of the elections, saying those who "refuse to adapt, and criticize our values" should "behave normally, or go away" in what many consider was a bid to woo voters appealed to Geert Wilders's anti-immigration, anti-Muslim Freedom Party (PVV).

Despite leading in the polls, Wilders was defeated by Rutte in the elections in a result that came as a sigh of relief to European politicians in the democratic line. However, what brought Rutte victory was deemed by many as his tough rhetoric on refugees and migrants – namely, Muslims. According to the polls, Rutte saw a boost in voter support after adopting his anti-Turkish stance, barring Turkish politicians from entering the country in what become a serious diplomatic crisis between two long-standing NATO allies.

It is safe to say that the influence ultra-nationalism and the far-right have had on the Dutch elections has been major while the threat of extremism has not been completely averted in the country. At the end of the day, far-right politicians in the Netherlands increased their number of seats in Dutch parliament – gained as a result of the elections – proving that the far-right is the second most influential party in the country.

Now, eyes have turned to another influential election in the EU, which is the presidential election that is set to take place on April 23 in France. Marine Le Pen, the leader of the far-right Front National which is allied with the Netherlands' PVV, is running for the Presidency and is expected to at least reach the second round of voting. Her anti-immigrant rhetoric previously brought her party considerable gains in the 2015 local elections. Furthermore, just like Wilders, who launched his manifesto late in August calling for "de-Islamization," the closure of mosques, banning sales of the Quran, and barring the entry of immigrants, Le Pen followed suit and launched a presidential campaign also targeting Muslims. In a speech she delivered

in early February, she said: "Mosques, prayers in the streets and the veil worn by Muslim women" are threats to French culture and ideals.

French Senator Natalie Goulet, also the vice-chair of the Senate Foreign Affairs Committee said the chances of Le Pen's victory should not be underestimated, as French citizens who are discontented by the current policies of the French government might want to "Try somebody new, someone who has not been in power before and who technically is not responsible for the current plight." She notes the balanced campaign of [Alain] Juppe and his "happy identity [. …] failed dramatically," because, as she fears, such moderation simply does not seem to sell anymore.

"Talking about tolerance is not a very popular way to collect votes now. It is common to see politicians ramp up their rhetoric, wade into debates and make populist promises on the campaign trail. But still, campaigning cannot be an excuse to violate human rights. At the same time we have no international laws any more [. …] more and more Rogue states and grey zones. ...It's a very scary and unpredictable time and I wonder if France will be able to escape the contagion [of radicalism]," Goulet said.

Germany is also heading to the polls in September. Similar concerns abound in the country as chances are high for its far-right party the Alternative for Germany (AFd) to increase its support for Chancellor Angela Merkel's opponent. Merkel has been criticized for opening Germany's doors to nearly 1 million migrants in 2015 alone, while violence-prone head of the AFd, Frauke Petry, in controversial remarks delivered last January, said police should use guns against refugees entering the country illegally as a last resort. The party is also notorious for its opposition to Islam. The AFd unveiled its aims to ban the use of Islamic religious symbols including burkas, minarets and the call to prayer, using the slogan, "Islam is not a part of Germany" in a platform that was held from April 30 to May 1 of last year. Polls suggest the AFd will receive 8 to 11 percent of votes in the September elections, making it the third largest party in Parliament.

"The deepening economic crisis has amplified nationalism across the European continent. With rising concerns, Europeans are unsettled that the piece they get from the cake is becoming smaller, and also that the new 'stakeholders' will create new burdens for the economy," Ali Faik Demir, an academic and expert on foreign affairs said. He added that such a mindset brought to the forefront an option to elbow out the weak circles, while warning that protectionist policies are unsustainable and only hurt bipartisan relations and trade.

The West fails at democracy test

Noting that Europe is failing the democracy test they have undertaken, choosing self-defense over their values and ideals, Demir said the Europe which dictates to other countries under crises has an obligation to abide by the law but is now itself choosing "politics" over the rule of "law." "Europe has become like the states which it has long been critical of," Demir said.

Just last year, Austria came on the verge of electing a president from the far-right. Presidential candidate of Austria's far-right party accused of being Nazi sympathizers, Norbert Hofer was well-nigh to presidency as he lost narrowly to his rival Alexander Van Der Bellen in last May's run-off vote. He lost again in the elections in October that were re-held after an objection was raised regarding previous results, before being defeated again – by a larger margin this time – but most agree he has left his mark in Austrian politics.

In 2015, Finland's euroskeptic and anti-globalist far-right The Finns party has become the second largest party in the current coalition. Likewise, Denmark's anti-immigrant Danish People's Party became the second largest party in the 2015 general elections. Greece's neo-fascist Golden Dawn, with apparent Nazi sympathies, came third in the country's September 2015 election. Hungary's anti-immigrant and protectionist far-right party Jobbik won 20 percent of the votes in 2014's parliamentary elections, and became the third largest party in the Parliament. The biggest surprise was the success of the extreme far-right in Slovakia's most recent election, with the leader of the People's Party-Our Slovakia allegedly having links to neo-Nazism. When the refugee crisis hit Europe, she said "even one immigrant is one too many."

Sharif Gemie, a professor of Modern and Contemporary History at the University of South Wales, said these new parties "lack clear, coherent political strategies, and appeal to contradictory needs of varied constituencies," noting that their unity depends mostly on the presence of a charismatic leader their supporters are attracted to. But among all, Gemie said France's National Front is an exception, asserting that "Le Pen dynasty has created a permanent structure, and the party has [just about] survived a change of leadership."

"The policies far-right parties propose are not sustainable. However, there is a real danger that – as with the example of the FN – they can become permanent fixtures, and they certainly have the ability to swing national politics in a more xenophobic, closed direction," Gemie said.
RELATED TOPICS