Isparta: stop and smell the roses 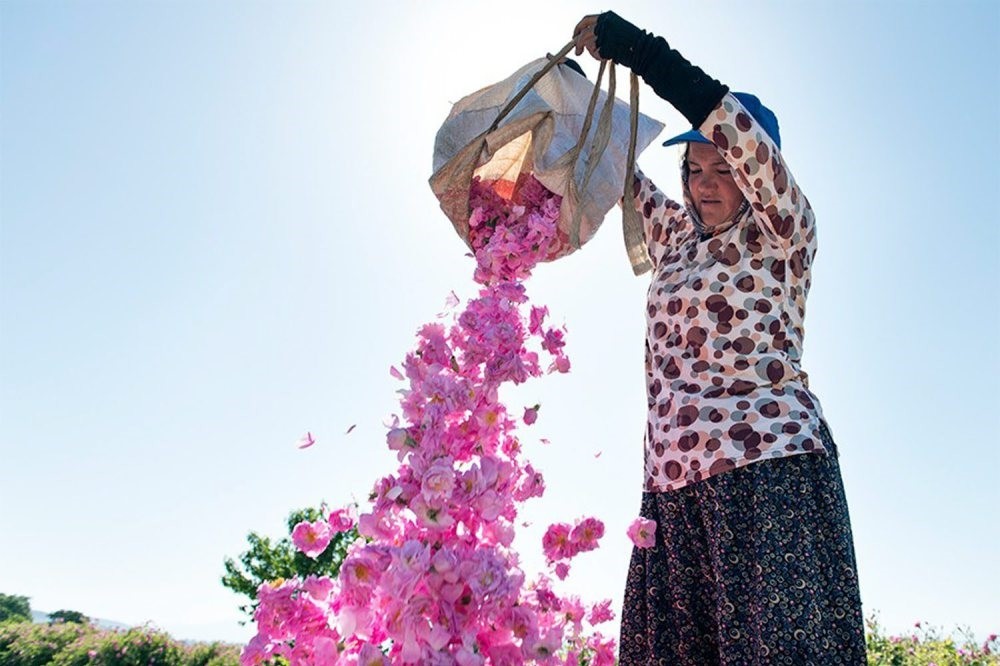 Turkey’s Mediterranean region consists of more than sunshine, sand and sea. Isparta, the land of roses and lakes, is waiting to be discovered, with its deep history and natural beauty

Imagine sitting on a balcony while the scent of wild roses floats through the air as you watch lake waters change with the sun. Though it may sound like the setting for a romantic novel, this unique natural combination actually exists in the heart of Turkey's Mediterranean region. Known as the land of roses and lakes, Isparta is a favorite destination for outdoor sports enthusiasts who enjoy its mysterious ancient ruins combined with clear seas, sand and warm sunshine. Covering almost 9,000 square kilometers (5,592 square miles), Isparta has a population of about 450,000 people. During spring and autumn, the city welcomes tourists from all over Turkey, as well as from around the world.

As the center of Turkey's lake district, Isparta is the Turkish province with the most lakes. Gölcük Crater Lake, Kovada Lake, and Eğirdir Lake amaze their visitors with spectacular views and a variety of activities.

However, if you are looking for a drier outing, Mount Davraz, Dedegöl Mountain and Barla Mountain promise hiking adventures galore. 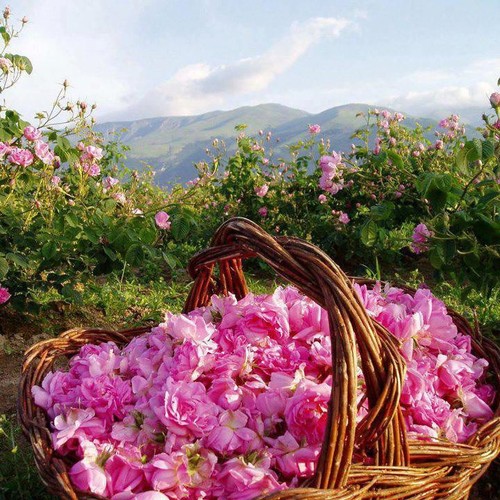 Over the years, Isparta has come to be known as the "rose garden of Turkey." Rose breeding and the rose industry is big business in Isparta. As a pleasant result, the sweet smell of roses growing in the fields can be enjoyed from every corner of the city. Almost every type of rose-based product, including rose oil, is produced and exported from Isparta. In fact, the region shoulders 60 percent of the world's rose oil production. Apart from roses, the city is also famous for growing cloves, lavender, thyme, apples, peaches, and cherries.

In addition to its botanical products, the carpets of Isparta are also well-known around the world for their quality and authenticity. Carpet weaving in Isparta dates back the 12th century. The city has a large Turkmen population, and their tradition of carpet weaving has become very important in the region. However, the Turkmens' unique weaving has slowly evolved as a result of consumer trends. Towards the 19th century, carpet weavers in the Isparta region, as well as in the Manisa and Uşak regions, started adapting their traditional styles to modern tastes.

With a strategic geographical position, Isparta has long been a favorite area for a variety of civilizations over the centuries, dating back to the Hittites. Throughout history, the city has also been ruled by Phrygians, Lydians, Persians, Macedonians and Romans. While under the Roman Empire, the city went by the name "Psiadia." Later when the empire was divided, the city became a part of the Byzantine Empire. Following the Turkish victory in the Battle of Manzikert, Isparta floated between the Turks and the Byzantines for around 200 years. In the end, the city of roses became a Turkish territory and has not been invaded by foreign forces since 1203, becoming an official province after the declaration of the Republic of Turkey in 1923.

St. Paul, an influential missionary, played an important role in spreading Christianity and promoting tolerance between the people of all religions and beliefs. During his lifetime, St. Paul, who was born in Tarsus, Mersin, traveled from Jerusalem to Rome and from Anatolia to Jerusalem as a part of his missionary operations. During his missionary journeys, St. Paul happened to pass by Isparta, and the road he used is now known as the "The Path of St. Paul."

St. Paul started his missionary journey in the ancient city of Perge, close to Antalya on the Mediterranean coast. He finally reached Isparta's Yalvaç district, where the biblical city of Antiochia Pisidia was located, to deliver his first sermon.

The Path of St. Paul, which is 500 kilometers (311 miles) long, is the second-longest trekking route after the Lycia Road. The road begins in Perge and ends in Yalvaç. The Yazılı Canyon, or the "Inscribed Canyon," on the path is also very popular with tourists.

Tall redwoods line both sides of the canyon, creating a cozy and beautiful haven for visitors. As you walk on through, Göksu stream flows beside you leading the way. After a few minutes of wandering, the canyon's namesake inscription will come into view. Carved into the canyon's rock wall, parts of the inscription were damaged during careless road construction, but what does remain refers to the renowned ancient philosopher Epictetus, who was born as a slave only later to follow an important destiny.

Isparta is a city immersed in natural beauty waiting to be discovered. Every rose-scented step will lead to adventure hidden in the secrets of the city. If you would like to learn more about this fascinating Mediterranean town, your Isparta journey can continue in today's "Top 5" corner.

Top 5 things to do in Isparta

With Isparta called "the land of roses," it is inevitable for the city to hold a festival dedicated to the flower. Organized by Isparta's Güneykent Municipality, the annual Rose and Harvest Festival is held every year in May allowing visitors to experience rose harvesting firsthand. Domestic and international tourists wake up early in the morning and head to the rose fields to help the local farmers.

After the day's harvest is complete, visitors can take a tour of the factories where the roses are processed. There they can observe how the oil from the flower is traditionally extracted. Although the festival is held in May, rose harvesting continues until the end of June. Throughout spring, tourists from Europe, the U.S., South Korea, China and Singapore visit Isparta to join the annual rose harvest.

The path St. Paul took during his missionary journey starts in Antalya and reaches the borders of Isparta after 100 kilometers (62 miles). St. Paul is known to have visited several ancient Roman cities on his journey. It is common to come across the remains of these ancient cities while following the footsteps of this influential man who played an important role in the spread of Christianity in Asia Minor. The trekking road is 500 kilometers in total and ends in the Yalvaç district of Isparta.

If you are determined to cover the entire path St. Paul took on his journey during your visit to Isparta, it is better to get your hands on a guide book to see the several different paths you can take. If you follow the safest route, the journey will take around 14 days on foot. However, some trekkers cut the path short and end the route in Eğirdir, completing the route in seven days.

When visiting "the land of roses," you cannot pass up the chance to buy locally produced rose products. Roses, especially rose oil and rose water, are known to be excellent for the skin. There are some local beauty companies who use roses in a variety of beauty products. If you have not already tried rose water, it is a great chance to do so during your visit. And while you are there, you can also purchase marmalade made with roses as well.

The Davraz Ski Resort in Isparta, which is located on Mt. Davraz, offers a snowy getaway to those who visiting Isparta during the cold months of winter. Located 26 kilometers from the city center, the 2,632-meter-high mountain is the center of winter tourism in the region. The ski resort allows its visitors to enjoy skiing while reveling in the beautiful view of Lake Eğirdir. The mountain has safe and entertaining ski routes for amateur and professional ski lovers. With no real danger of avalanches or getting lost, the Davras Ski Resort is a safe place for family trips. With its 12 tracks, skiers can enjoy the snow as much as they want on Mt. Davraz. 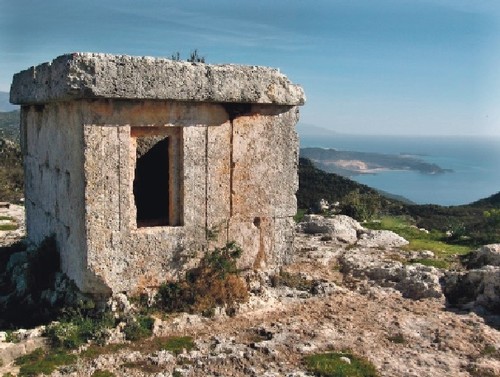 Where the Path of St. Paul ends, the ancient rock graveyard begins in Yalvaç. The rock tombs of Isparta, which are located near Lake Hoyran, mark an ancient graveyard that was reserved for the noble. There are a total of three rock tombs near Hoyran that amaze visitors with their grandeur. Each tomb is 3 meters in height and 3 meters in width.

The identities of the people for whom the tombs were made are still unknown. The tombs are in the shape of rooms, which suggest that the people who were buried there were definitely noble people. Archaeologists discovered that the tombs were once decorated with frescoes, however, all the ornaments have been lost over time. 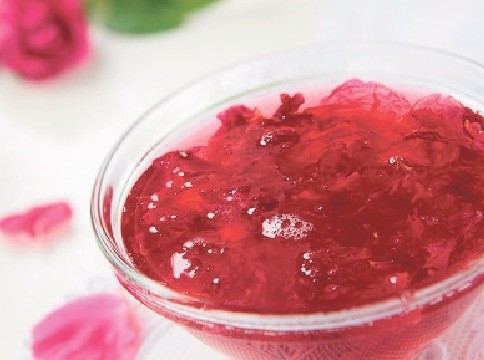 Take a moment to sit back and imagine a field full of roses, their intoxicating perfume swirling around you. Roses are truly charming treasures, beautiful whether in a garden or in a vase. Interestingly, these flowers are not only known for their romantic personalities, but also for their versatile use in fragrances, essential oils and even makeup products. The timeless elegance of roses has been celebrated for centuries, both for their cosmetic uses and also in the culinary arts. Often described as "bottled sunshine," rose petals can be used to make deliciously fragrant jellies, syrups and jams, allowing you to capture the sweetness of summer all year long. As the "rose garden of Turkey," the city of Isparta offers the opportunity to experience roses through all five senses, but most uniquely through your taste buds. Isparta's rose petal jam is very popular and available for purchase throughout the city. If, however, you do not have time to travel to this wonderful city, why not introduce the joy of roses to your own home by making homemade rose petal jam?

If you've never your hand at homemade jam before, you will find that rose petal jam is fairly simple to make when roses are in full bloom. All you need is 500 grams of fresh rose petals, 500 grams of sugar, a liter of water and two lemons to make this delicacy at home.

The trick for making a delicious jar of rose petal jam is to select the rose petals carefully. Discard any dead or discolored petals and aim for the best smelling roses you can find. It is important to remember that the color of the petals will determine the color of your jam, so it is better to pick petals from the same color roses for each batch. Make sure your roses are pesticide and chemical free, taking care to wash the petals thoroughly to remove any dirt or tiny insects. Put the petals and the sugar in a bowl and gently mix the petals with the sugar with your fingers. After letting the petals rest in the sugar for a few minutes, place them in a saucepan with the water and the juice of two lemons. Stir the mixture until it boils and continue to stir for another five minutes while the mixture thickens.

The most entertaining part of making rose petal jam is choosing the canning jars. For this delicious and beautiful-looking jam, you should find jars that reflect its colorful beauty. After cleaning your jars, pour in the jam with the help of a wooden spoon. Once you are done, the jam is ready for you to enjoy.

Rose petal jam is delicious served with bread, toast or muffins. If you want to add a touch of summer to your table, you can also get creative with your jars by tying ribbons around their lids or by gifting this homemade delicacy to your neighbors.