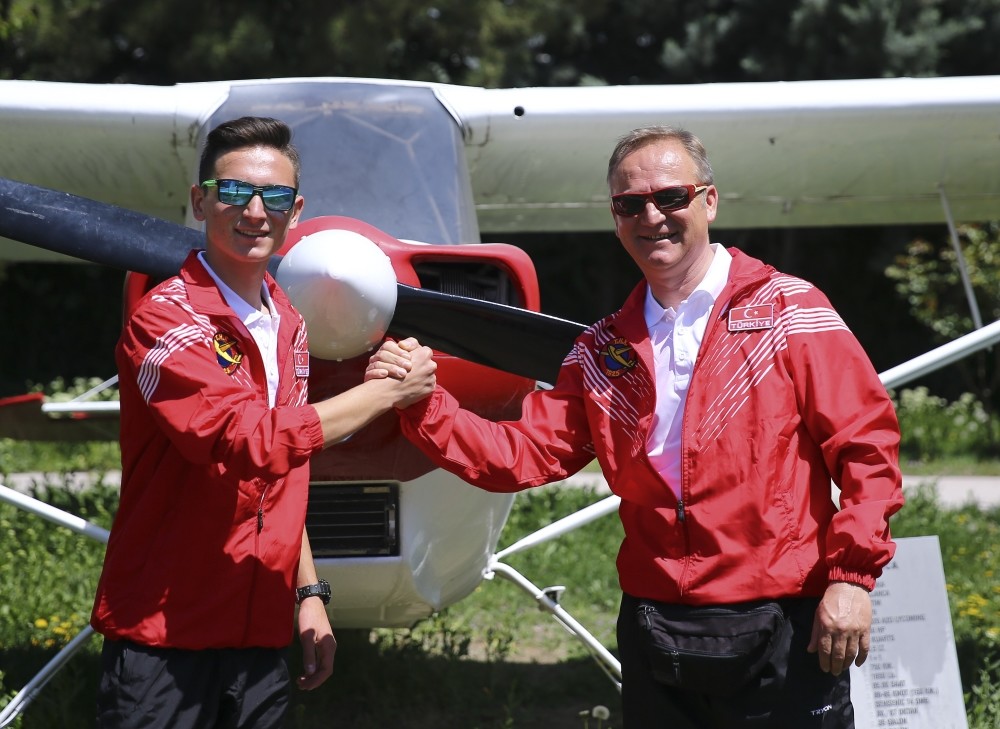 Paragliding pilot İbrahim Dinçer and his son Kerem, who is following in his father's footsteps, will compete with the Turkish national team in the Paragliding World Cup Tour 2017, to be held in Albania May 5-15

Flying has always been mankind's biggest dream and perhaps, the closest one can get to flying is paragliding. The increasing interest in paragliding, especially in touristic hubs, has made this sport highly popular in Turkey in recent years. Although paragliding became a sport in Turkey during the 90s, it was quickly taken up by adventure seekers and made the Mediterranean and Black Sea coast of Turkey an attraction for paragliding enthusiasts. Despite being labeled a "touristic sport" by most, paragliding is a full-time job for İbrahim Dinçer and his son Kerem Dinçer.

İbrahim Dinçer, 47, is a proud father who shares his passion for paragliding with his 17-year-old son Kerem. The father and son duo are among six paragliding pilots competing for the Turkish national paragliding team as they prepare for an extraordinary experience competing on the same team while representing their country at the international level for the first time. Speaking during an interview with Anadolu Agency (AA), Dinçer indicated how the experience feels as a father, noting: "They say that your child doesn't do what you tell them to do, they do what you do. Kerem is a good example of this."

Dinçer began paragliding nearly 30 years ago, making his first paragliding jump in 1988 before signing up for professional training with the Turkish Aviation Association in Bursa province. "I was 17 years old and the youngest trainee. From that day on, I continued to pursue this sport," he said.

The paragliding star began to shine in Turkey in the 1990s and has gone on to become one of the pioneers in the sport. In addition to competing at national and international levels, Dinçer also offers training to aspiring professionals. Speaking about the competition in Albania, he said: "This year we will be competing in the World Cup Tour held in Albania against national teams representing 20 countries. Since we decided to participate in this cup, we have been working to increase our accuracy by pinpointing coin-sized targets for landings. To perfect our sport, we have even been exercising while walking in our everyday lives."

Dinçer told AA about his son's experience, explaining what motivated his son to devote himself to the sport: "He has been with me up in the hills since he was 4 years old. I have never given him theoretical training, but he has always been with me throughout the training sessions I have conducted. He must have been a very good observer because he has surpassed me in skill."

There is no doubt that the best supporter of İbrahim is his wife, Çiğdem. "In the past, my wife used to cheer for me at the competitions. Now, she cannot pick sides as her husband and son are both competing, but she mostly favors our son, Kerem. She says our son has finally surpassed me."

He argued that paragliding is not a dangerous sport, affirming that the media portrays the sport as dangerous due to the occasional accidents that occur. He said: "Last year, we performed 800,000 dives, both as part of a competition and for pleasure, all of which were completed safely. It's unfortunate that paragliding is portrayed in the news only when a fatal accident occurs."

Stressing that their goal is to rank among the top three as a team in the World Cup, Dinçer said: "In the competition, everyone is my rival. Regardless of who it is -- my father or my son, it doesn't matter. However, I always hope that Kerem is successful. After all, he has proven that his success is not arbitrary. He has a landing style parallel with the standards of European paragliding pilots. It's of great importance to be highly skilled as a paraglider."

Responding to questions about Kerem's Turkey championship where he surpassed his father in terms of skill, İbrahim Dinçer said, "It's easier for Kerem to find spare time for exercise. He must have dived 50 percent more than I did. I don't have as much time for exercise as he does. Also, he is young. He leads a less stressful life than I do. He doesn't have to worry about the costs associated with the sport and other such concerns."

"As paragliding is not a sport with spectators, we don't have any sponsor," added Dinçer. "For most of the competitions, we pay for all incurred expenses without any support. Sponsors may support athletes and pave the way for young athletes. For example, sponsors can advertise on the parachutes that we use."

Dinçer spoke about the importance of flying in different regions during practice jumps, saying: "We went to Serbia with Kerem, and there were 111 pilots with us. All of them knew Kerem. They were all trying to acquire Kerem's style and trying to recruit him for their team. However, we insisted on competing for Turkey and told them that we would not change our team."

Kerem Dinçer, on the other hand, said he started paragliding involuntarily: "I have been observing this sport since I was four, and I have been paragliding since I was 7 years old. I was flying with a small parachute that my father had bought for me before I began flying on my own at the age of 12. When my father first took up paragliding, we used to have fun and just laugh, saying that he couldn't do it right. My heartbeat used to speed up, while he was flying. It was exciting to watch him paraglide. Aviation is an entirely different world."

Adding that he was trained by the best acrobatics pilots last year, Kerem said: "I have a specific goal for every flight. I cannot take off and fly normally, and I cannot land in a straight position. I make acrobatic flights. Setting a goal for every flight has helped me to make good progress. I have conducted more than 1,000 flights."

Kerem stated that in the beginning his mother was really anxious, noting: "She called me in an angry voice off and on. Then, I started to reject her calls since she demoralized me. My parents got used to the situation after a while. My father consoled her, and she started to watch my flights via Facebook and Instagram. Then, I made her fly as well, and she is in high spirits now."

Kerem also commented on his success and the fact that he has surpassed his father in the Turkey championship, saying: "I excelled beyond my father as he didn't have time for exercise because of work. I used to exercise after school so I progressed quickly. I was watching videos and trying to imitate the paragliders in the videos."

Stating that he is a well-known figure in the international arena, Kerem said, "I am known globally. Foreign athletes come to see me, calling me by my name. When they see us, as father and son, they think that Turkey is a country where young athletes can progress quickly. I inspire the youth."

Kerem said that his devotion to paragliding has not had any detrimental effects on his studies, thanks to the teachers and his school director's support, adding that he gets good grades in school. "The youth must participate in sports in some capacity. Life shouldn't just be limited to school. I want to go on paragliding after graduating with a degree in physical education and sports. I work as a trainer, as well. My first goal was the championship in Turkey, and I achieved it. Now, the European and world championships are coming."