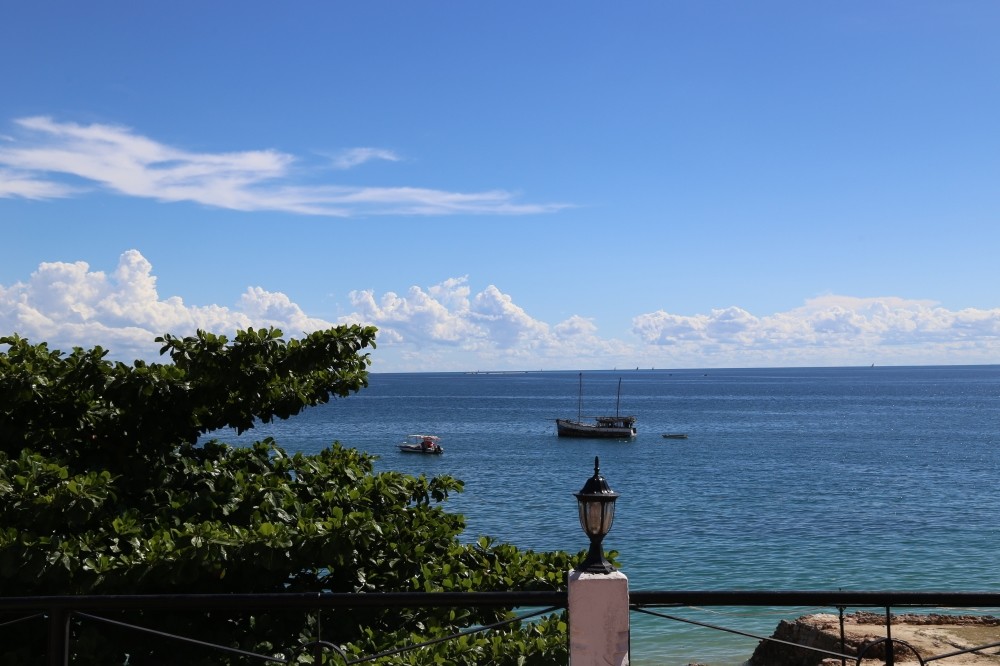 Among the distinctive features that distinguish Zanzibar from other cities in the world is that it carries traces of African, Arabic, Indian and European civilizations together with its architectural structure and cultural heritage.
by Anadolu Agency May 16, 2017 12:00 am

The culture and architecture on Zanzibar island in Africa bear traces of Arabic, Indian and European civilizations

Founded by Iranian immigrants and named after the Persian "zengi bar" which literally means "the black-skinned coast," Zanzibar is a large island that is part of modern-day Tanzania in East Africa, with deep traces of Arab and Persian civilizations where the Portuguese, Oman and British reigned for years.

Today, the oldest settlement on Zanzibar island is Stone Town, which entered the UNESCO World Heritage List in 2000.

Among the distinctive features that distinguish Zanzibar from other cities in the world is that it carries traces of African, Arabic, Indian and European civilizations together with its architectural structure and cultural heritage.

In the city where many buildings are undergoing restoration, visitors go on a journey through history.

Walking under the sun on Zanzibar, visitors pass along the narrow streets where it is impossible for cars to enter, enjoying the shade offered by the stone-built homes. White men, or the Mzungu as the locals call them, are now wandering in the streets where slaves were circulated in the 19th century and earlier.

Almost all houses in the city have steps on the front and sides of the door. These steps that were built for welcoming guests are also the sections where coffee and treats or dessert are served to visitors.

These steps, which continue their traditional function today, are also the areas where the locals play the "Bao" game. The women sit on these steps and chat with their neighbors. The steps are also used to go from one home to another during rainy weather. One of the remarkable architectural details of the city is the beautiful doors that come to life with their eye-catching engravings. Many of the engraved doors visible on local homes have gained a reputation as the "Zanzibar gates" around the world. These doors were inspired by Indian culture and some of these doors, which have round pin nail engravings, feature some verses of Qur'an engraved on them.

The stone buildings also have long wooden balconies and windows that open outward.

According to historical sources, a number of cities, including Zanzibar and Pembe, were established on the regional islands during the period of the Abbasid caliphate, Harun Rashid.

The 70-person capasity mosque, which was built in the 10th century on the remains of two other mosques, one stone and one wooden, from the eighth and ninth centuries in Zanzibar and was unearthed with archaeological excavations in the 20th century. The mosque is believed to be the oldest building built in sub-saharan Africa.

It is also stated that one of the dinars found during excavations in the Unguja Ukuu region in 1865 belonged to the year 797.

Almost every street in the island carries traces of slavery. Some of the magnificent houses that line the streets of the island, as well as tombs in local cemeteries, belonged to an old slave trader.

The old "Slave Market" and "Slave Prison," which have a big church on it today, help visitors to understand the sufferings experienced in history even a little.

The slaves, brought from the cities of Kilwa and Bagamoyo on the mainland of Tanzania with the sailboat called Dhow, were imprisoned in the dungeons of this prison.

Some of the slaves had been taken from their native lands, thus speaking different languages and coming from various cultures. Some were craftsmen and musicians in their native tribes but shared the same fate as other slaves in these dungeons, where they shared rooms and rarely spoke.

The first thing that the slave traders who reached Zanzibar did was to go to the customs office and pay taxes for every slave that they managed to bring alive.

The most expensive of these slaves were the women and children. There was a big increase in slave trade during the second half of the 19th century. The last stop of slaves who were sold here was South America and sometimes India.

Speaking to Anadolu Agency (AA) with regards to the history of the island, Amir Muhammed, a researcher who specializes in the history of Zanzibar, stated that the first people that came to the island were the Persians, settling in the 8th century. Muhammed stressed that Zanzibar saw immense changes upon the arrival of the Arabs.

Noting that Zanzibar was referred to as a Muslim-Arab state 200 years ago, Muhammed said that later when Europeans came to the region the island became renowned for slave and ivory trade around the world.

Muhammad said that ivory gathered on the island and the slaves were sold from the island to the Middle East and Europe, recalling that 60,000 Arabs and close to 500 Europeans lived in Zanzibar before the 1964 Revolution and many of the Arabs had to leave the country after that year.

Pointing out that there are only 2,000 Arabs living in the island now, Muhammed said that many Tanzanian people on the mainland come here to work and live.

Muhammad highlighted that the current government is not a British government but African, underlining that the current government has succeeded in making the two countries one. Amiri Suudi, a 65-year-old beekeeper living in a fishing village on the countryside of Zanzibar, suggested that trade and education on the island are not as good as they used to be. Stating that it was the decision of others, not theirs, to unite with the Tanganyika mainland after the Zanzibar Revolution, Suudi stated that all educated people left the country after the revolution.
RELATED TOPICS