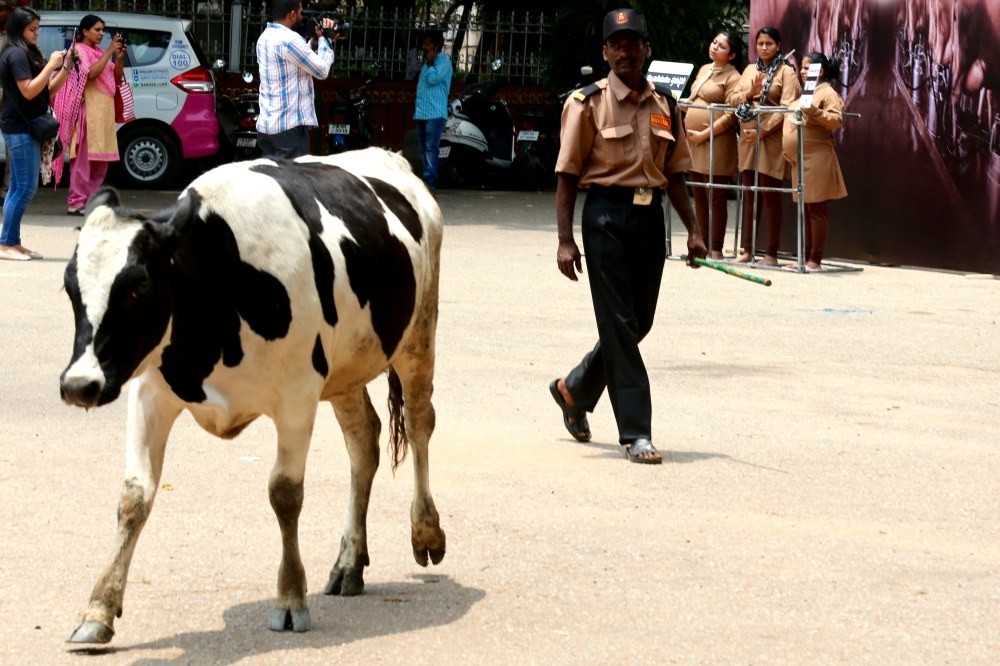 A cow walks on a street in front of a group of pregnant activists from the animal rights organization, u201cPeople for the Ethical Treatment of Animals,
by Shakir Husain May 18, 2017 12:00 am

While Hindus consider cows sacred, the religious belief has recently taken a dark turn, morphing into a violent trend that has involved killing cow sellers or suspected beef eaters

Indian film actress Kajol Mukherjee Devgan, known worldwide simply as Kajol, was recently forced to confirm that she did not eat beef after receiving abuse over a video of a meat dish being prepared by her friend.

"A video of me at a friend's lunch suggests that there was a beef dish on the table. That's a misconception. What was shown was buffalo meat that is a legally available meat. I'm issuing this clarification because this is a sensitive matter that may hurt religious sentiments, which is not my intention," Kajol wrote in a message posted online.

Many Hindus, especially those belonging to the upper castes, consider cows to be sacred.

The message by the 42-year-old Bollywood star, who has acted in many popular movies, reflects the new and aggressive trends in the country's cow politics.

Beef is banned in most parts of India, and what is sold in the country and exported as "beef" is actually buffalo meat.

But India's self-styled "cow protection" gangs espousing the cause of Hindutva, Hindu nationalism or Hinduness, seem oblivious to facts or truth as they violently try to force their lawlessness on people who transport cattle or participate in the trade of the animals.

There have been spates of lynching in some parts of India over suspicions of cow smuggling and beef consumption. It's safe to say the cows in India have become more than a holy animal to some with the issue now driving national politics like never before.

Cow-related violence has increased since the Hindu nationalist Bharatiya Janata Party (BJP) came to power in 2014. However, the sacredness of the cow is not a new concept in India with other parties also playing cow politics in indirect ways.

The Hindi-speaking heartland of India, also derisively called the "cow belt," and the states ruled by the BJP have recently been seen in the news over cow politics. Many Muslims and Dalits have become victims of brutal violence perpetrated by various cow militant groups.

In addition to creating general fear among those who eat meat, these developments also have effects on the rural economy and animal trade.

Around the world, cattle, fish and poultry are part of the food chain, but India's cow politics is wreaking havoc on the meat industry. Millions of jobs are at risk in hotels, restaurants, meat processing plants and shops.

The rhetoric and politics over the issue has reached a new level with the government recently telling the Supreme Court that it will issue "unique identity" tags, similar to biometric identity cards for people, for millions of cattle.

The tags will include a 12-digit number and details, such as the animal's age, breed, color, height, horn type, tail switch and any special marks on the cattle's head as well as its "progeny."

Tackling poverty, human trafficking, illiteracy, corruption, child labor, inequality, inadequate municipal services and even starvation in rural areas have all become secondary to the cows, which have taken their sacred seat in national policymaking.

Recently, there was a video of a man in Uttar Pradesh carrying the body of his son because a local hospital allegedly denied him an ambulance service. Ironically, the state has started an ambulance service for cows called the "Gauvansh Chikitsa Mobile Vans," which translates to the "Mobile Medical Vans for Cows."

Cow politics is the shrillest in the BJP-run Uttar Pradesh, India's most populous state of more than 200 million people.

About one-fifth of the state's population is Muslim, and the followers of Islam in the country fear further marginalization amid the rising Hindutva ideology. The state saw widespread turmoil during the movement to build a temple at the site of the Babri Masjid in Ayodhya, leading to the mosque's eventual destruction on Dec. 6, 1992.

Other BJP-ruled states are pursuing similar cow politics. The western state of Gujarat proposed life imprisonment for cow slaughtering, while the Hindi-speaking Chief Minister Raman Singh of Chhattisgarh said anyone found killing cows in his state will be hanged.

"Not a single incident of cow slaughter has taken place in the last 15 years. Anyone who does so will be hanged," the chief minister boasted, according to a media report.

Chief Minister Vijay Rupani of Gujarat, the state where India's freedom movement leader Mahatma Gandhi was born, said he was working to make Gujarat "vegetarian." However, he clarified that he was not against those who eat non-vegetarian food. However, many Gujarati schools have banned non-vegetarian food on their premises. The state earned a bad reputation internationally in 2002 when more than 1,000 people were killed in anti-Muslim violence, arson and looting.

Interestingly, Gujarat is keen on protecting only indigenous varieties of Gir and Kankrej cows, while excluding the common Jersey cows. If statements by some Hindutva leaders are taken into consideration, only Indian cow varieties are sacred, while foreign cows, for example those used in the European dairy and meat industry, are not even considered cows, but a completely different type of animal.

Their logic and the whole concept of Indian cow politics seems to defy reason.

Still, reports of violence and volatile political rhetoric gives the impression that cows are being slaughtered in India's meat trade. However, this information is misleading, and the propaganda is cleverly being used to justify the violence committed in the cow's name.

Cow slaughtering is banned in most of India's 29 states. In fact, people usually refrain from trading cows knowing that the act can lead to violence with the police providing no protection when the mobs arrive.

In the northern state of Rajasthan, a dairy farmer was lynched and his colleagues attacked while transporting cows. Two men were lynched in the northeastern state of Assam under suspicion of stealing cows. In Noida, near India's capital of Delhi, two men were attacked by cow vigilantes for transporting the cows to their home after purchasing them from a market.

People can be killed simply over suspicions of cow trading or allegations of eating beef. Some non-vegetarians are even shunning mutton based on the fear that it could start beef-eating rumors which would draw mobs to their homes.

The Bollywood actress Kajol doesn't have to fear lynch mobs after issuing her "clarification," but if she were a Muslim or a Dalit, her story would have been very different.