Karagöz, the funniest man of shadows, celebrates 500 years in Anatolia 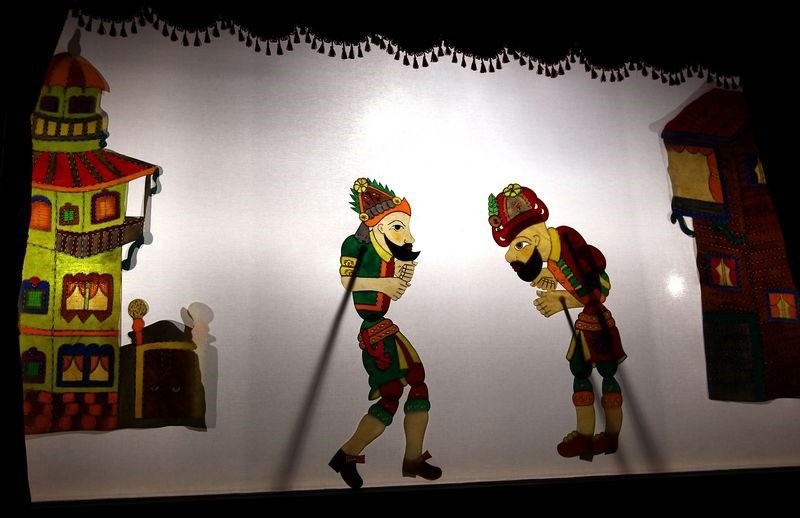 The traditional shadow play, which is also known as "Karagöz" in Anatolia, is perhaps one of the few common things that many generations share. From seven to 70, it has managed to entertain children around Turkey and this year we celebrate the 500th anniversary of this classic stage play's introduction in Anatolia

The art of shadow play or shadow puppetry, which is a projection in a satirical, humorous and sometimes thought-provoking ways on the state of human relations on screen through light and shadow, is celebrating the 500th anniversary of its arrival in Anatolia.

Beyond being theatrical entertainment, shadow play, which attracts every segment of the society from seven-year-olds to 70-year-olds with its subjects performing on the screen, also comes to life with characters or puppets created with camel, cattle or beef skins colored in dyes and voiced separately by the puppeteer or shadow master.

Puppeteer Suat Veral who spoke to Anadolu Agency (AA) about shadow play, which has been a part of traditional Turkish performance for 500 years in the Anatolian lands, explained that Yavuz Sultan Selim had shadow puppetry performed during the circumcision ceremony of his son after seeing it in Egypt.

Saying that new stories were created and new descriptions were prepared after shadow play came to the Anatolian lands, Veral explained that shadow play is actually a dream, and it has a characteristic that enables one to find the truth in one's imagination.

Veral shared the fact that Hacivat and Karagöz, the main characters of shadow play, are part of a story taking place in Bursa during the 14th century, adding that these characters were transferred to the shadow play and followed by the creation of new characters.

Veral also stated that the art of shadow play, which has maintained its existence for half a millennium in Anatolia, is a very special culture belonging to Turkish society.

Noting that the shadow play has changed greatly in 500 years after coming from Egypt to Anatolia, Veral said people and society started to embrace the characters of Karagöz and Hacivat as they come from within themselves, and began to see themselves on the screen.

Saying that people started to perceive their own realities thanks to Karagöz and Hacivat, Veral said: "Karagöz and Hacivat have many messages. Karagöz is an illiterate and ignorant person. Hacivat, on the contrary, is a knowledgeable character who listens to other people patiently. Is this not also what happens in Turkish society? Sometimes we can become ignorant, and sometimes we listen to the other person with a sense of culture and come to a point where we shape ourselves. I think we gain both advice and entertainment here and gain as much information as we can."

Veral said Karagöz and Hacivat can be perceived by the public as if they are fighting. "But how are they reconciled? And there is that. The plays of Karagöz and Hacivat always have happy endings. By adding innovations to the shadow play as puppeteers, we give very important messages to the Turkish people," he said.

Suat Veral also said children watch the shadow play enthusiastically and are especially interested in the dialogues about children.

Stressing that Karagöz is a very important character in a shadow play, Veral said, "When we look at the exit point, the words are always conveyed to the public through Karagöz. In the past, shadow play used to be announced as "Karagözplay," then Hacivat became involved. Hacivat is also a very important character, but there are some very beautiful lessons we can learn from Karagöz."

Explaining that Karagöz is ignorant and sometimes goes into things headfirst and can talk without thinking, but that at the same time, he is a decent person who does not hurt anyone in the end, Veral said sometimes there are words that he can misunderstand but he is such a people person. "He is a man who speaks the truth completely. Children love Karagöz more and learn a very important message from him. They listen to what he says," Veral added.

Veral said important projects have been carried out in shadow art addressing children, young people and the public, adding that they have received both domestic and international interest.

Stating that they have been organizing workshops in the Karagöz School, which they opened for children about six months ago in Eyüp, Veral gave detailed information about the project, saying that they teach children how to draw and paint the characters and provide them with an opportunity to understand this culture.

"They learn the technique of making, panting and recognizing Karagöz and Hacivat in their own imagination. We are not only teaching Hacivat and Karagöz, but also the production of new characters and imitations of sound," Veral said. "Why is it so important for these children to learn the shadow play? It is necessary to tear our children away from an internet or cartoon addiction. The Karagöz School makes it possible for children to express themselves through such an art. We tell them that these cultures belong completely to them, and they come from the Ottoman tradition." Highlighting that this rich culture has a very important place in the social sense, Veral wished that branches could be opened in colleges and universities, adding that this special culture should not be limited only to Turkey since it also has an opening to the world.

Saying that the number of characters in the shadow play rose from eight to 38, Veral said: "The plays are divided into old and new ones. I have created close to 350-400 characters. We need to reflect this culture without doing something committing any errors just to make people love this art. True expressions, correct words as well as the handcrafted hand gestures should also give your character a sense of reality."