The inconceivable price of low-income housing 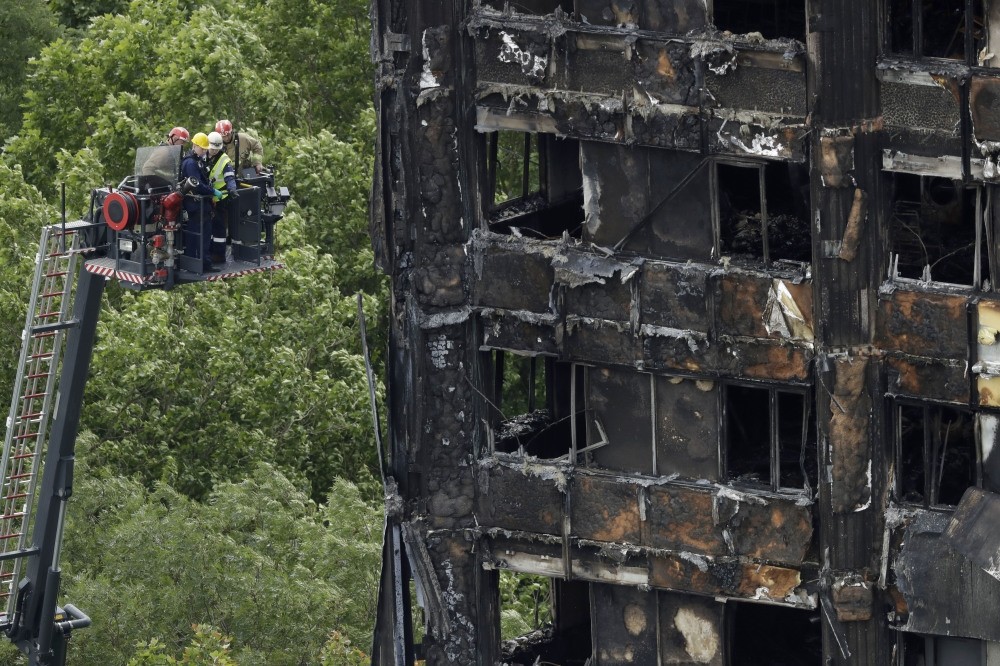 Emergency workers on a raised platform point at a section of the fire-gutted Grenfell Tower in London, Friday, June 16, 2017, after a fire engulfed the 24-story building Wednesday morning.
by Jane Louise Kandur Jun 17, 2017 12:00 am

Last week, the world woke up to find London burning. The Grenfell Tower, a 24-story tower block that housed several hundreds of people, started to go up in flames around 1 a.m. on Tuesday night. The fire quickly spread, trapping many people on the upper floors

The Grenfell Tower tragedy is one that will have a huge impact on British society. On the night of the fire, the British communal spirit came to the fore, with people rushing from all over London to help in any way they could. They brought blankets, food, clothing. They stood and watched. One man stepped forward to catch a baby that was thrown by desperate parents from a flat on the tenth floor.

Still, in the coming few weeks and months, the extent of the impact of the tragedy on British society will become clearer.

The Grenfell Tower blaze is more than a tragic fire. It hits at the very heart of the history of the British social system. The Grenfell Tower is a type of building known as "tower blocks," a type of housing that has a long history; sometimes gleaming with positive connotations but more often than not tainted with despair.

According to the English Housing Survey, one of every 200 homes in England is located in a high-rise block, or tower block; in London, 8 percent of the population lives in tower blocks. There are more than 700 high-rise tower blocks in London.

The majority of these were built between 1950 and 1970. What drove British architects and councils to construct these high-rise buildings?

Between World War I and World War II, there was a move to eliminate the slums that existed in major cities in the U.K. However, razing these slums left the government with a problem these tenants needed housing. The problem was exacerbated after World War II when men returned from the war: These brave soldiers needed access to inexpensive housing.

The first response was to erect "prefabs." These structures started to be built immediately after the war and consisted of single-story, temporary housing units. Winston Churchill was in favor of building 500,000 prefabs across the country. This style of housing was always to be a stopgap measure until more permanent housing was available. Today, 70-plus years later, many of these prefabs are still functioning as family homes.

The prefabs were the first effort to provide council housing for those in need. The private sector was failing to provide housing for all people, thus resulting in a need for the state to step in to provide affordable but quality housing for low-income families.

As time progressed, the ideas of architect Le Corbusier started to gain favor. Le Corbusier – Charles-Édouard Jeanneret – was a Swiss-French architect who lived between 1887 and 1965. Le Corbusier is considered to be the father of modern architecture, and introduced the concept of "streets in the sky." Rather, he proposed that the social texture which existed on the ground level could be shifted into the sky; thus saving ground space while providing inexpensive housing. The tower blocks were proposed as modern living, providing the latest modern amenities and widely regarded as a positive alternative to the slums full of disintegrating, terraced housing.

It was due to these ideas that a massive effort to construct high-rise buildings to house low-income families ensued. From the very start, these tower blocks have been controversial. First, there were accusations that town planners destroyed the traditional neighborhood and, eventually, tight-knit communities of terraced houses were lost when the neighborhood went vertical.

With the introduction of the elevator, the tower blocks grew higher and higher. By the 1960s, British town planners and city architects were caught up in Le Corbusier's International Style and Walter Gropius's Bauhaus School. But this simple, basic building style did not translate well into high rises in U.K. cities.

People who live far up from the ground are more susceptible to stress, are more likely to suffer mental health issues and the children living there can easily be drawn into hostile and delinquent behavior.

The tower blocks, instead of being beacons of hope, became dungeons of despair. In the late 1960s, Ronan Point in Newham, in east London, collapsed. This collapse was accompanied by a collapse in hope and belief in the high-rise solution for low-income housing.

Many residents of tower blocks describe their lives as a "miserable" experience. The buildings are grey and often exposed to the elements, with wind and rain being driven down long open corridors. The stairwells are for the most part dark, and a stench of urine and rubbish permeates the walls. The walls are covered by graffiti, despite the local council's efforts to keep them clean.

All of this was brought home with the collapse of a newly built tower block. On May 16, 1968 a resident of Ronan Point apartment tower lit the gas to make a cup of tea. This resulted in a gas explosion that caused part of Ronan Point to collapse. Four people died immediately and 17 were injured, one fatally. The collapse of Ronan Point led to an investigation which revealed that the tower block had been shoddily built. The existing building codes had not been sufficiently stringent to protect the residents against disaster. The codes had been drawn up for buildings of six stories; when these codes were applied to tower blocks, the result was an unstable building. Ronan Point had been built of precast panels joined without a structural frame. Essentially, the only thing holding the building up was its frame. The collapse of Ronan Point led to new, stricter building codes.

In 2009, a fire broke out in Lakanal House, south London. Six people died in this fire. The tower block had only one stairwell, making it hard for people to get out. Originally scheduled for demolition, the local council had decided to refurbish the building instead.

The belief that the buildings could be improved to be made habitable again is widespread. Local councils give the maintenance work to private companies, which slap on new paint and keep the hallways clean. However, this is merely papering over the cracks. The inherent flaws in the building do not go away.

Grenfell Tower in North Kensington was refurbished last year. The work cost 8.7 million euros and included insulating panels being mounted to the exterior.

Sam Webb, an architect and fire expert, spoke to the Guardian about how the Grenfell was "a disaster waiting to happen. ...We are still wrapping postwar high-rise buildings in highly flammable materials and leaving them without sprinkler systems installed, then being surprised when they burn down."

Further, it was not just fire experts who were concerned about this cosmetic patching up of tower blocks. Since the refurbishments, the residents of Grenfell Tower had been expressing their concerns about fire risk. There was no building-wide fire alarm or sprinkler system. There was only one fire exit. Boilers were left uncovered in living rooms and kitchens. There were large piles of rubbish left unattended, which in and of themselves could be a great fire risk. Unfortunately, the Kensington and Chelsea Tenant Management Organization (KCTMO), the body responsible for the maintenance of the high rise, chose to ignore or play down these complaints.

In the 1990s, Sam Webb carried out a survey of tower blocks in the U.K. In his report, more than half of the buildings did not meet basic fire safety standards. The country's Home Office responded by saying that nothing could be done because too many people would be made homeless.

The concerns of the residents of Grenville Tower over fire safety did not include the insulation panels that were used to clad the building. The tower was clad with ACM cassette rainscreen panels. In other fires that broke out in tower blocks, no more than three or four flats were involved in the fire and, because of this, tower block tenants are advised to "stay put" in case of fire. However, in the case of Grenfell Tower, this advice proved fatal. The insulation panels were highly flammable. It seems pretty clear from the footage of the fire that it was able to spread throughout the building via these panels. The outside of the building was covered in flames. Those who lived on the top floor and decided to heed the advice to stay put, paid with their lives.

Although there was no fire alarm to alert the residents, many managed to escape due to young Muslim men who were passing by. These young men and boys were returning from the tarawih prayer, a late night prayer which is an integral part of Ramadan. They spotted the fire, and tried to wake up as many people as possible.

Andre Barroso, 33, said: "Muslims played a big part in getting a lot of people out. Most of the people I could see were Muslim. These people have also been providing food and clothes."

The Grenfell Tower disaster will force the government to take a long, hard look at housing policies. Tower blocks should be safe places to live – low-income housing or otherwise, safety is paramount – because, as we know, there is no guarantee that the next tower block fire will occur in Ramadan, when the Muslim residents will be up and about to alert those sleeping in their beds.