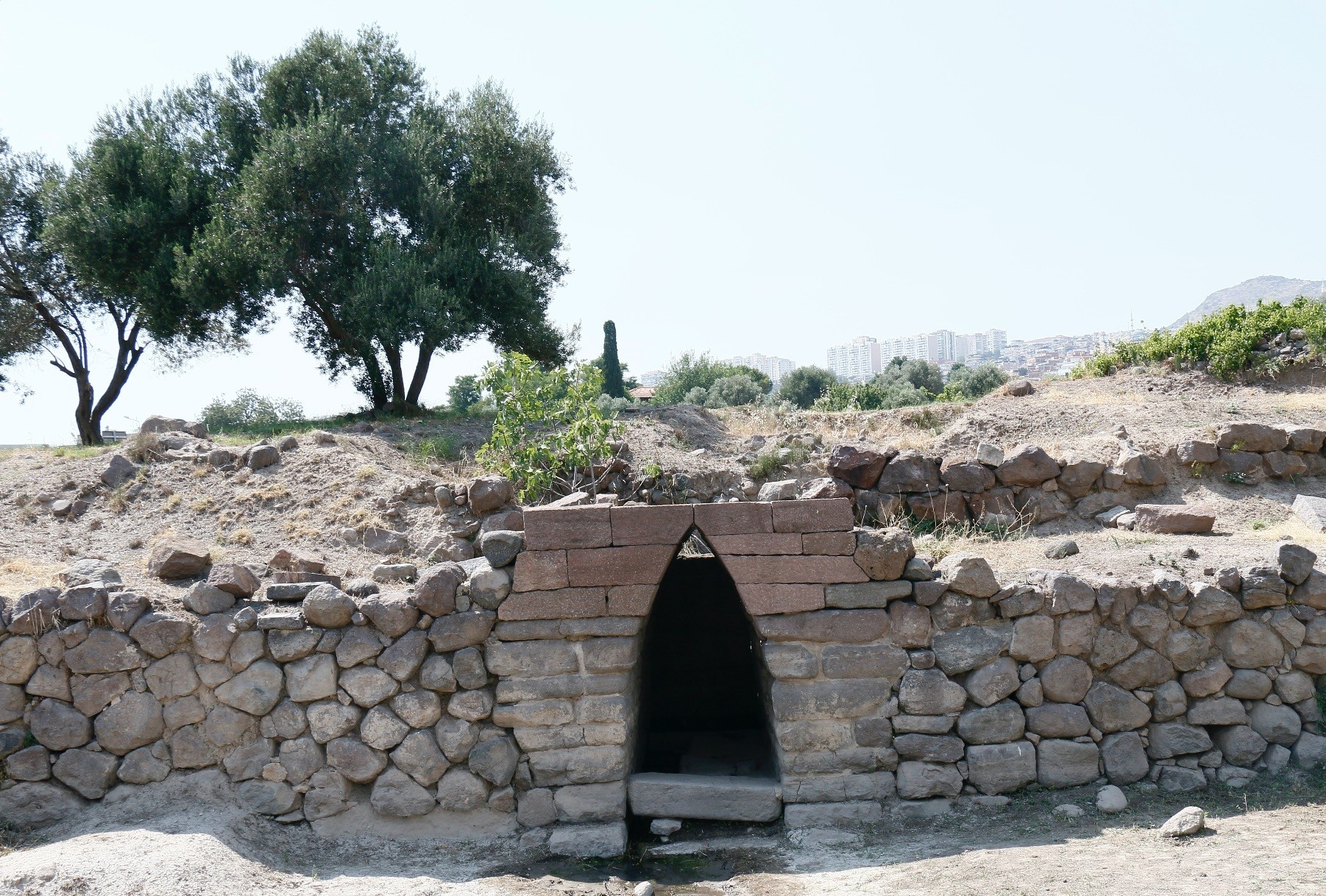 Although it is hard to come by these days, good news that extends beyond the supernatural has come from the Old İzmir excavation site located in İzmir's Bayraklı district, where a 2,700 year-old ancient fountain is still active and in good condition

Forget about the unnerving archaeological news depicting the ignored ancient sites that are used for different purposes like vegetable gardens or even as landfills. I can imagine that now the old fountains dating back to Ottoman times, full of garbage and cigarette butts, are swimming before your eyes. Regardless, there is good news in terms of archaeology coming from İzmir's Bayraklı district where an ancient fountain dating back 2,770 years is still in active use.

Built in the seventh century B.C. in "Old İzmir" located in İzmir's Bayraklı neighborhood, the first known settlement in the western province which dates back to 3,000 years ago, the ancient fountain is one of the most rarely seen examples of its kind in the world.

Located at the Old İzmir excavation site in Bayraklı, the ancient fountain is regarded among Western civilization as the oldest stone fountain ever to have survived until the present day.

With a rectangular structure, the ancient stone fountain consists of an entrance threshold stone, a walking corridor, a water reservoir and a drainage channel. Constructed in the form of a long corridor, the fountain stretches 2.5 meters high and is more than 5 meters long.

Speaking to Anadolu Agency (AA,) the chief of the Old İzmir Excavation, Professor Cumhur Tanrıver, offered information about the history of Old İzmir.

First settled 3,000 years ago in what is now modern-day Bayraklı, İzmir's first settlement of İzmir was moved to İzmir's Kadifekale neighborhood at about 300 B.C. As a result, the former settlement in Bayraklı began to be referred to as "Old İzmir."

Again, within the light of excavations conducted by Tanrıver and his team, it is seen that the ancient stone fountain at Old İzmir was constructed atop a spring, located just outside of the city walls on the border of the old settlement, at the end of the seventh century B.C.

Stressing that it was this water spring that attracted the people of the time to settle in the area, Tanrıver noted, "The people of the ancient period used to select the locations for their settlements according to the strategic importance of the place. Water is considered the number-one essential for a settlement. Thus, the effect of this spring on the ancient settlement had an undeniable impact on settlement history in the region. In ancient times, water was a nonportable resource; hence, people chose to settle wherever they found a water source."

According to the excavation team, it can be inferred from the fountain's architecture was of tremendous importance how for the people of Old İzmir.

"The fact that it was constructed 2,700 years ago is enough to prove how important the fountain was for the people of the settlement. There weren't even temples during those times. In addition to city walls and dwellings, major architectural structures were just beginning to be constructed then. During such a time, a fountain with a length of more than 5 meters is truly representative of strategic importance. Also, the artificial aqueduct seen on the top of the fountain functions as a pioneer of the time. Constructed by sliding stones, the artificial aqueduct is one of the first examples of its kind from the era. Actually, the first solid examples of aqueducts are just beginning to be seen 400 years after artificial ones were created."

Estimated to have held a population of between 3,000 and 5,000 settlers at the time, Old İzmir is thought to have housed water wells located in the gardens of local homes. However, the fountain used to function as a public space and source of life for the ancient settlement.

Having been used actively by the Old İzmir people for 300 years, the ancient fountain still provides water to visitors despite possibly damaged water channels. Since the water source still flows from the spring, it was undoubtedly a spring that attracted the people of the time.

Tanrıver reiterated that the fountain is a deeply rooted structure with many features, adding: "You cannot see a 2,700-year-old fountain like this anywhere in the world. There are a few examples but they are not as well-preserved as this one. It is like magic to visit such an old fountain and see that it is still providing water. Here you can see what the Old İzmir people used to see 2,700 years ago. It is also the oldest fountain in Turkey. In Greece, there are one or two fountains dating back to the sixth century B.C., however, these fountains are not in good condition compared to the one in Bayraklı. Lastly, there is one in Athens which is much older than this one but you can only see its base."

According to excavation chief Tanrıver, projects being conducted for the Old İzmir are to be labelled as an archaeological site. The ancient fountain will also be one of the main attraction points at the ancient site, Tanrıver says.