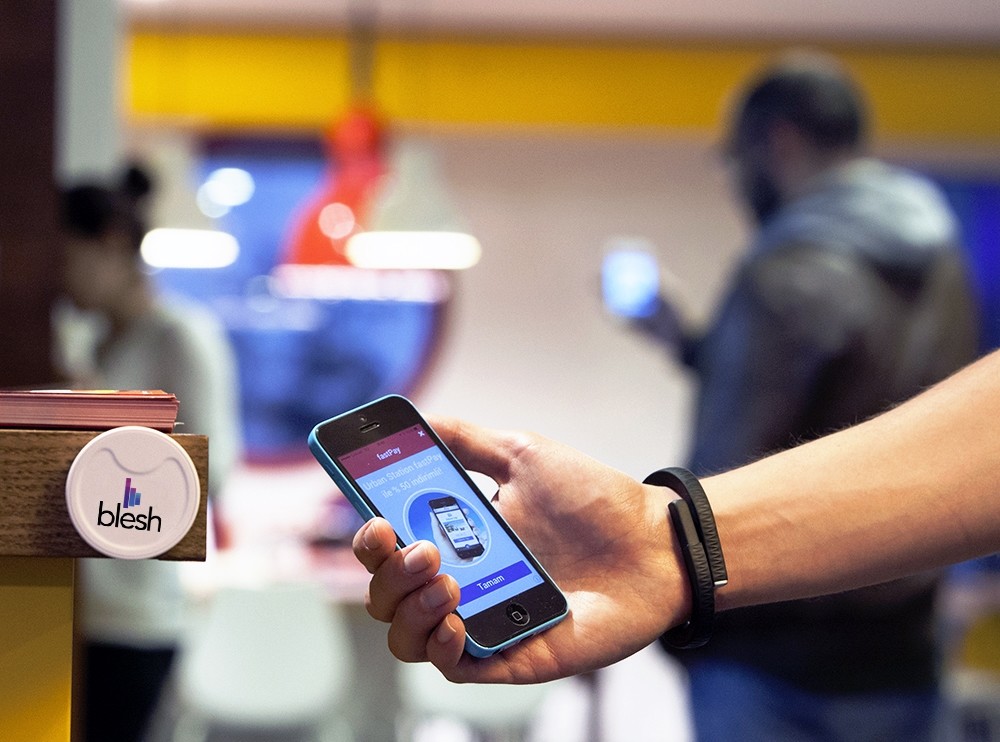 Man showing the Blesh app on his smartphone. Blesh initiated their Beacon tech more than two years ago. the number of Beacon users increased from 20,000 to 90,000 in the last two years.
by Erhan Kahraman Jul 04, 2017 12:00 am

Blesh Beacons may be tiny pieces of technology, but it helps businesses analyze customer expectations accurately. Developed by an Istanbul-based tech firm, this Bluetooth beacon platform opens the doors to new possibilities for retailers

A significant portion of Turkish white-collar workers likes to spend their free time at the mall. At least 41 percent of them drop by the nearest mall to their workplace whenever possible. In addition, out of every 100 white-collars, 35 of them socialize in coffee shops, 31 like to go to restaurants, while 18 percent prefer activity areas. Nearly 61 percent of them own Android phones, compared to 39 percent with iPhones.

These statistics come neither from some government surveillance agency nor from a data breach carried out by a group of elite hackers. This is just the internet of things done right. Blesh, a Turkish tech startup behind these statistics and it uses a smart piece of technology called "Beacon," to gather all this data.

In general terms, a beacon is a tiny, coin-shaped Bluetooth device which interacts with smart devices e.g. smartphones in close proximity and exchange information with them.

It was one of the first gems invented at the beginning of the internet of things era. Beacon allows businesses to collect extremely precise location data from smartphones and devices to perform an end-to-end contextual communication.

In the beginning, these beacons were tiny coin-shaped devices and could only be installed on walls or floors. But, now they come in different shapes and sizes, ranging from USBs to cards, to beacons embedded in other devices. Beacons have become particularly popular over the last few years, because they made smart devices smarter and helped many businesses with their transition to the internet of things.

"Prior to this technology, businesses were already experimenting with location-based technologies. However, they were not satisfied with the macro-level targeting, which was expensive and would be regarded as spam by many consumers," Blesh CEO Devrim Sönmez explained. "Beacon technology however made it possible for them to interact with customers where it means the most, while they are in their location/store."

Blesh saw a big opportunity and began offering advertisers and developers the ability to make context-aware communication through its beacon platform.

Two years ago, when we first covered their story, Blesh had nearly 20,000 beacons deployed in Turkey. Now they have 90,000. Last summer, they received $4 million in Series A funding, led by TRPE Capital. More than 250 brands now use their technology and Blesh Mobile Communication Beacon Platform is integrated with more than 120 apps.

"We have expanded our reach not only through more app integrations, but with more locations as well. Our beacons are in use all across Turkey, at leading retail chains, airports, banks, ATMs, subway stations, at more than 200 malls, cafés and restaurants, office buildings and university campuses," Sönmez said.

Consumer behavior is changing, so are the ways of communicating with them

Today's consumers are always connected. Any business that aims to grab their attention, and then have meaningful conversations with them, has to have a solid mobile marketing strategy with location-based technologies.

With its beacon platform, Blesh is offering businesses a way to understand and engage with customers, based on their location. With beacons, businesses that have physical stores or a point of interest are now able to reach passerby customer and guide them through the store and offer personalized deals. Even if a business does not want to interact or have an amazing deal for a specific customer at a specific moment, they can collect their visiting data and target them at a later time.

Wait a minute. Do beacons collect location-based consumer data from their smartphones? Isn't that a direct violation of data privacy?

"We take the issue of data privacy very seriously and all of the data we gather through our devices are anonymous and remains that way all along," he answered. "We do not collect any sensitive data, and the only data we store is the device location and ID. Even if the user is opted in, meaning if the business requires the user to log in to its app, their credentials, such as name, e-mail and other preferences are all anonymous to us. It's the business' decision to attribute it to a specific person, again with permission from the user."

The CEO added that governments are also taking necessary measures to protect privacy, and they are acting in line with regulations.

"So we don't think there is much to worry about any possible threats. However, laws and codes might be a bit late, considering the speed of innovation in technology. So to be on the safe side, companies acting in IT need to respect consumer data, whether critical or not," he said.

With Turkey's 120 most used mobile apps in their portfolio, Blesh has access to a wealth of information through its huge data network, deriving vital statistics and analytics.

"It is very likely that a random visitor of a venue already plays role in our data network. Since our beacons are also placed in office buildings, we tag the visitors, and if they happen to be there more than a specific number of times on a regular basis, we regard them as white-collar workers," Sönmez added.

The future looks bright for beacon technology. Its success in retail has sparked interests from other industries, like banking, health and aviation. These devices are now used for making customized offers to visitors at specific branches of a bank, while airports use them for luggage tracking and flight check-ins.

Beacons are also used for asset tracking and management in many industries, as well as patient tracking in hospitals.

Blesh also aims to fully leverage the rise of beacon technology, "We are expanding globally with our recently opened office (third so far), in Atlanta, Georgia. We are also collaborating with Cisco at Qatar's biggest mall project, Doha Festival City, which will be opened in later this year. Our beacons will be placed around the Angry Birds theme park and send proximity based notifications," said Sönmez.