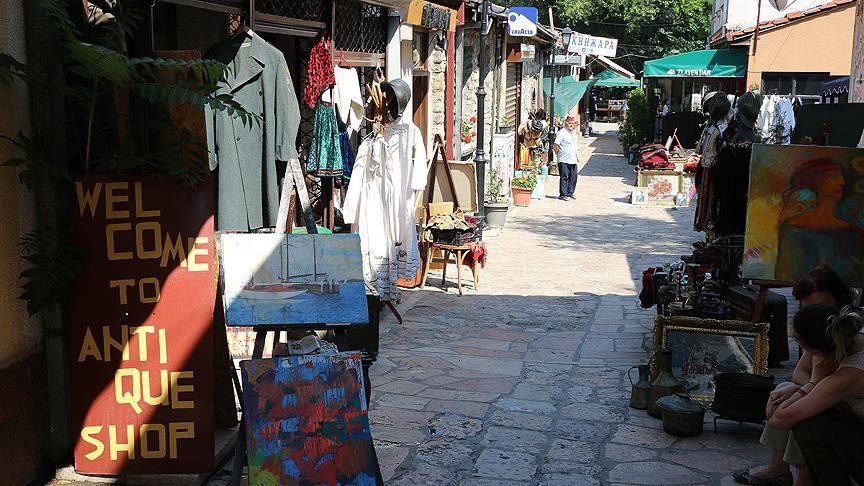 The historic Old Bazaar in Skopje, the capital of Macedonia, immerses visitors in the soul of the city with its small shops, ateliers, Ottoman mosques, traditional restaurants, covered bazaars and baths

Situated along the eastern banks of the Vardar River in the Macedonian capital of Skopje, the Old Bazaar stretches from the stone bridge to the flea market and from the Skopje Fortress to the Serava River as the most visited spot in the city and a favorite destination for local and foreign tourists, successfully preserving a small piece of antiquity and the historic significance of every corner house that dots the area.

Through a shopkeeper's eyes

Creating unique works of art through an original form of finger painting in her studio at the Old Bazaar, Anjelina Koleva spoke to Anadolu Agency (AA) about her extraordinary painting style which incorporates old or damaged gramophone records. Koleva said that her love for painting began at the age of 14: "Once, one of my favorite gramophone records, which I had received as a gift, was broken in the car. I didn't want to throw it away, so I decided to create a beautiful object by painting it. I drew something on it using my cosmetics. It really turned out to be an extraordinary, beautiful and mesmerizing object. From that day on, I started to paint on my father's old records. He used to have a collection because he was a music fan," Koleva said, adding that she reflects on her feelings about daily life in her art as well as her personal favorite themes of women and red roses.

Next to Koleva's atelier sits the oldest antique shop in the Old Bazaar. With century-old instruments, traditional garb, old uniforms and jewelry, the antique shop takes you directly back to the 19th century. Bearing traces of the past on every corner, the shop offers a beautiful display of uniforms from the world wars, military arms, antique coins, jewelry, old documents, plates, cameras, binoculars and clocks, with a gun dating back to 1760 being the oldest piece in the antique shop.

In another display of tradition, street performers also dot the streets of the Old Skopje Bazaar, painting beautiful images for local tourists. One street artist, İmer Bayrami, has been painting on the streets of the bazaar for 30 years. Speaking about the tourists he has met; most of which are of Turkish, Chinese and Japanese origins, Bayrami said visitors generally prefer paintings that reflect Skopje architecture. He also stressed that street artists make a considerable contribution to the bazaar's success, adding: "Through these types of art, we are preserving the architecture that has been handed down to us by the Ottoman Empire."

On the other hand, Mahmut Enes Kemer uses graceful calligraphy to keep himself busy while earning some extra cash in his shop at the bazaar, where he teaches visitors about the art of calligraphy, not commonly found in Skopje. As a young student from Istanbul studying at International Balkan University in Skopje, he offers locals a unique look inside the world of calligraphy.

Explaining that he began practicing the art of calligraphy with his friends, Kemer said, "I realized at one point that calligraphy is an extraordinary art form and decided to open an atelier here to promote it." Kemer first offered his works to tourists on the streets of the Old Skopje Bazaar before opening his shop. Through his hard work, he has discovered a high demand for calligraphy in the area and plans to hand over his shop to someone who will continue the art in Skopje.

The bazaar's history for 9 centurıes

Some of the earliest known documents recorded about the bazaar offer a detailed glimpse into the merchant quarters of the bazaar, which date back to the 12th century. While the marketplace truly boomed after the Ottomans took control of the region, it went on to expand and become the city's main economic and mercantile center. The ancient origins of the bazaar are evident in the more than 30 mosques, numerous inns and other ancient Ottoman buildings and monuments that surround the Old Bazaar. While the structures were heavily damaged in two major earthquakes of 1555 and 1963, the most significant damage inflicted on the area occurred during World War I and World War II. As a result, the area's monuments have been renovated on several occasions and, nowadays, represent the only remaining cultural monuments of the Republic of Macedonia, home to the multicultural heritage of several different ancient civilizations.

What to look for?

The shops in the bazaar have been passed down from generation to generation, with each new tenant preserving family traditions and keeping their craftsmanship alive. However, the bazaar has been influenced by 21st century modernism, as well. In addition to the small shops in which ancient crafts sometimes clash with modern industrial trends, the Old Bazaar is still an interesting center for culture and art surrounded by historic monuments.

Offering delicious, affordable food and drinks in an authentic atmosphere, the bazaar's traditional restaurants offer dishes made from recipes dating back centuries. If you happen to be there on the weekend, local vendors also offer live music while you dine.