Petulant men of GCC and the coup against Qatar 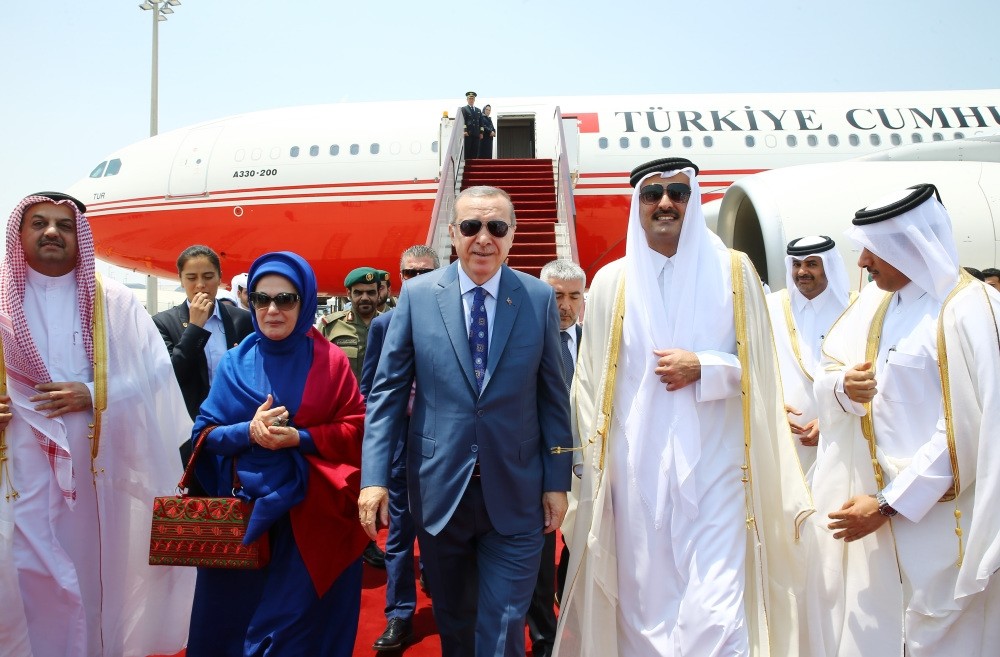 President Recep Tayyip Erdoğan's trip to Saudi Arabia began with some apprehension as to how to mend ties between the four Gulf Cooperation Council (GCC) members and Qatar. In addition to an ongoing list of responsibilities on Turkey's plate, the GCC coup against Qatar is a sensitive issue on Turkey's agenda. Since June 5, 2017, Turkey's leadership's tasks in the region have grown as Saudi Arabia, the United Arab Emirates (UAE), Egypt and Bahrain have been conducting "tough and exclusionary" policies against Qatar to "change its ways." Turkey has been open about the "bullying" that Qatar has been experiencing from the sanctions of the four GCC countries.

Since the establishment of the GCC in 1981, this is probably the most taxing situation it has ever endured. This grueling fight between the four GCC members and Qatar is likely to exacerbate and further constrict any hope that is left for the Middle East region. Day by day we are moving toward polarized regional politics. In the larger context of global politics we can easily pinpoint the GCC rift as a marker of a major breaking point.

When the commotion first began, we saw Erdoğan, without even flinching, stand up for Turkey's critical ally, Qatar. In the coming days, Turkey will follow up on promulgating a solution while continuing to standby Qatar in this sordid coup attempt. In this case, Turkey has an even more burdensome role to play as a mediator because it has announced its position from the very beginning. We are on the side of Qatar today and tomorrow.

In this new era of shifting regional politics, we can clearly assert that in the power grab, no country - be they dominant powers or newly emerging markets - will allow the emergence of a power vacuum. This means a new kind of war in the Middle East. The war against Qatar is not a fight amongst nations, rather it is a battle of the elites to prevent hegemonic power and to re-draw ideological alignments in the region. The reformulation of the balance of power will determine the leading competitors in the region to be economically and militarily dominant. In the meantime, national security policies made by competitors will play a major role in the way the region's politics will be shaped internally and externally.

Qatar's relentless efforts to not back down to the bullying showcases its choice to balance its strength against the perpetrators rather than cave in and bandwagon with its aggressors. From an international relations theory perspective, the practice of balancing is a better-sought option because it does not allow the dominant players to overshadow other minor players and force them to abide by the hegemon's rules. Of course, within this particular case Qatar is demonstrating unprecedented vigor to not be unlawfully pressured by a group of bullies.

Certainly the act of intrusion to the sovereignty of a nation is something replete in political history and we, indeed, continue to see it very clearly in the 21st century. Hence, the movie playing out in the Gulf is the concoction of a long-time diplomatic intrusion that came to bursting point with U.S. President Donald Trump's administration. Many of the employees from former President Barack Obama's administration in the Pentagon, State Department, CIA and NSA are working to create a continuum of the American grand strategy over the past eight years. Why? I really do believe that Trump and his close-knit team have absolutely no clue about Middle East policy, let alone any clue as to world politics. Therefore, they need the full support of the policymakers of the past administration to put together a "Trump plan."

Trump's visit to Saudi Arabia was smart in the sense that it outlined much of the topics, which are oil, trade and the fight against terrorism, in order to assert the U.S. alliance with the Saudi monarchy. Yet, it did not end there. Teaming up with the dictator Abdel-Fattah el-Sissi was another important stronghold for the U.S. when it came to Middle East policy. On one side there is the Wahabi monarchy while on the other there is the secular coup plotter. Presumably, in the Trump administration's view, if all goes according to the plan, the U.S. will have a couple of friends to back-up its position in the region.

But the leaders who met in Saudi Arabia were shortsighted. Their short-term goal to divert the path of what is largely defined by the West as political Islam is hitting a dead-end. Muslim politics, conservative politics, Islamic politics, jihadist politics and all types of Muslim-related political activities jumbled up under the "political Islam" category is outpouring in such a way that the Muslim world is starting to crumble and get further out of control. The U.S. national security apparatus is in such disarray that sectarian wars, differing political organizations, trade, economics, cybersecurity and all sorts of issues are being meshed under U.S. "blanket" foreign policy. To the dismay of large swaths of people being affected by such reckless policies now there is a widespread "local and international political awareness" about what the American hegemon is doing in the region. We should not be surprised by the rising anti-American sentiment because these desperate times are the product of the U.S. system and, interestingly, its uncanny shortsightedness.

Patrick McDonald, in his book "The Invisible Hand of Peace," talks about how the Bush doctrine aimed to bring in trade deals with the Middle East to use economic relations as a route to boost freedoms in the Middle East region. It was assumed this would lead to the expansion of liberties and the establishment of democracy. Yet, McDonald observes that, on the contrary, the democratization process brought along more military strife.

There are two failures on the part of American Grand Strategies in the past decade. One is the economic markets and institutions to a certain degree worked out but, political Islam, in the Western description, continues to be an ad hoc problem. And secondly, only recently, the U.S. failed drastically by supporting a military dictatorship in Egypt while remaining dormant in the Palestinian-Israeli conflict.

Looking at the mistreatment of Qatar by some members of the GCC points to the fact that the intertwining of Western politics and Middle Eastern reality is a recipe for disaster. Whether we look at the situation from a realistic or an idealistic perspective, unfortunately, the picture is bleak. There is a serious degree of polarization in the world as a result of increasing heated conflict in the region.

But no matter how much the disputes increase we are sure of one important principle. All nations, including those like Qatar, despite their small geographic areas, will fight to protect their sovereignty until the end. In this rocky path, Qatar will continue to have the unwavering support of Turkey with all its economic and military might.