The story of honey 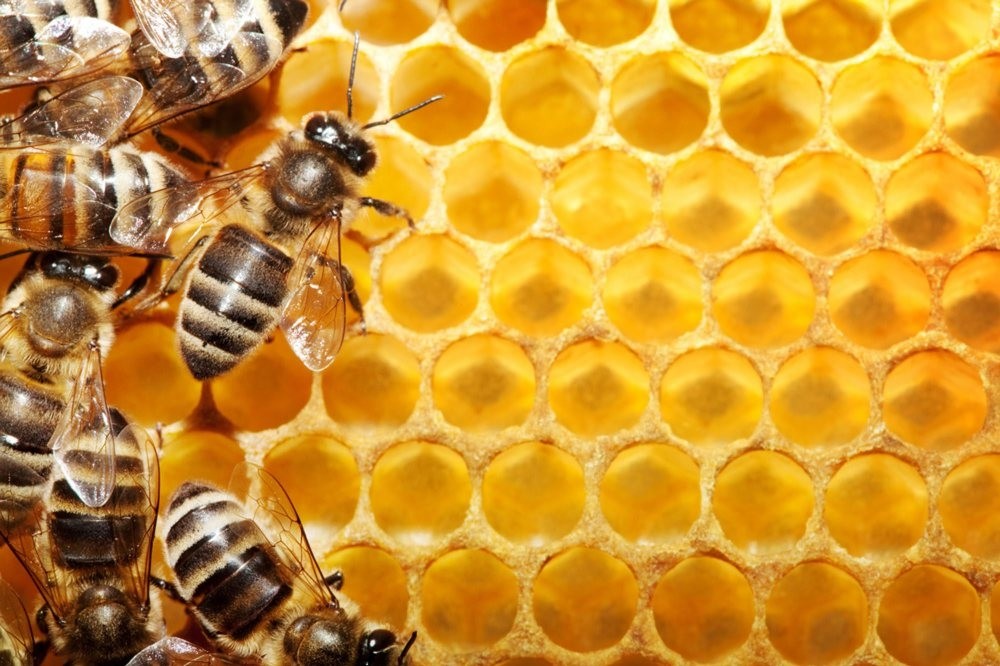 As a hospitable gesture, the Ottomans often presented a spoonful of honey to their guests. During the economic crisis of the first half of the 20th century, honey was often the only dessert available throughout Anatolia.
by Ekrem Buğra Ekinci Aug 11, 2017 12:00 am

Honey is one of the oldest foods known to man, but this natural treat is much more than just a sweetener, as honey also works as an effective cure for ailments and a natural shield against infection

The holy books describe heaven as a place where rivers flow with honey. In fact, the Quran has a separate surah called "Nahl" (meaning "bee" in Arabic) on bees and honey. In Nahl it says, "There are cures for humans in honey." Likewise, Prophet Muhammad would recommend honey for stomachaches and loved drinking honey melted in water, also known as honey sherbet.

Look at these bees!

The bee is admired in Islamic culture where it is seen as a symbol of someone following a mission for the benefit of humanity. Although Eastern materialist philosophy presents the ant as the most hardworking and determined, the ant is actually nonproductive in relation to people. In contrast, the bee was used as a symbol for many ancient cities and states, including Ephesus, in the Archaic Age. Likewise, the symbol of the Motherland Party (ANAP), the Turkish political party founded by Turgut Özal, the late president of Turkey, was a bee.

It is also important to note that bees construct their hives in hexagonal patterns, a functional shape that allows the bee to maneuver comfortably inside. If the bees had picked a square shape, for example, the round bees would have been hard-pressed to squeeze their rotund bodies through the spaces. Likewise, if the bees had chosen circular-shaped structures, the majority of space inside the hive would have been wasted, whereas hexagons fit perfectly together, resulting in maximum honey storage.

Though very delicious, honey was first used as a medicine. In the fourth century B.C., the famous physician Hippocrates would use it to cure lung and cardiac patients or to apply on open wounds. Because it functions as antiseptic and preservative, honey was also used in ancient mummification rituals. In fact, 13 kilograms (28 pounds) of 4,000-year-old honey was discovered in a wooden bowl in Tutankhamun's tomb.

The first examples of beekeeping in the Anatolian region occurred during an important phase of civilization. The Greeks learned beekeeping from the Egyptians and used honey for preserving dead bodies, including the corpse of Alexander the Great. The Assyrians also enshrouded corpses with honey. In the past, the decapitated heads of criminals would be brought to town centers in a haircloth bag full of honey to be diagnosed. Villagers even used honey to preserve butter.

As a hospitable gesture, the Ottomans often presented a spoonful of honey to their guests. In the past, most desserts and sherbets were also prepared with the sweet treat since sugar was an industrial product and hard to come by. During the economic crisis of the first half of the 20thcentury, honey was often the only dessert available throughout the Anatolia region.

The story of Roman commander Pompey's defeat at the hands of the King of Pontus, Mithridates, was narrated by the historian Strabo as follows: "The Roman troops encamped on the Black Sea coast. The soldiers then stuffed themselves with honey made of toxic rhododendrons. The ones who didn't eat too much narrowly escaped, became dazed and started to daydream. The ones who ate too much, on the other hand, completely lost their minds and passed out. As a result, the troop of Mithridates immediately slaughtered the unconscious soldiers."

The types of flowers the bees visit is also very important. If the flower is toxic, the toxins will be transferred to the honey as well. The wild rose, or mountain rose, of the Black Sea region, for example, produces a bitter undertone resulting in the name "mad honey." One teaspoon a day is believed to cure stomach and bowel diseases. However, consuming too much can lead to severe symptoms, including vomiting, sweating, dizziness that could lead to fainting, a drop in blood pressure and, in severe cases, heart failure. "Mad honey intoxication" is one of the leading causes of food poisoning in Turkey. Luckily, quick medical intervention can counteract any adverse results.

'May your food be honey!'

When Sultan Mehmed II, also known as Mehmed the Conqueror, founded the council, a well-wishing villager said: "Oh my puissant sultan, may your morning be fortunate, your food be honey and cream, and your route be made of meadows." Pleased by the peasant's words, the sultan generously rewarded the man. Onlookers were surprised by the sultan's generous reaction, to them the leader answered: "What was he supposed to say? He wanted to bless me with the best place and food he knew of."

The flowers and other plants used by the bees are reflected in honey's categorical names: Chestnut honey, pine honey, blossom honey or Macahel, Anzer and Erzurum honey. Turkey is a world leader in pine honey production, which is mainly produced in Turkey's Marmaris district. Because of its low sugar content, it has a darker color. Pine honey is a shelf-stable product and is slow to crystallize. However, most prefer blossom honey for its elegant flavor and pleasant fragrance.

Interestingly, this sweet treat is not only reflected in cuisine, but also throughout our culture. For a sweet start, the first days of a newly married couple are called their "honeymoon." Likewise, seeing it in a dream can mean good luck and a joy-filled future. In literary history, honey has repeatedly been used as a synonym for beauty, grace and goodness.