We are the smiling faces of the municipal police 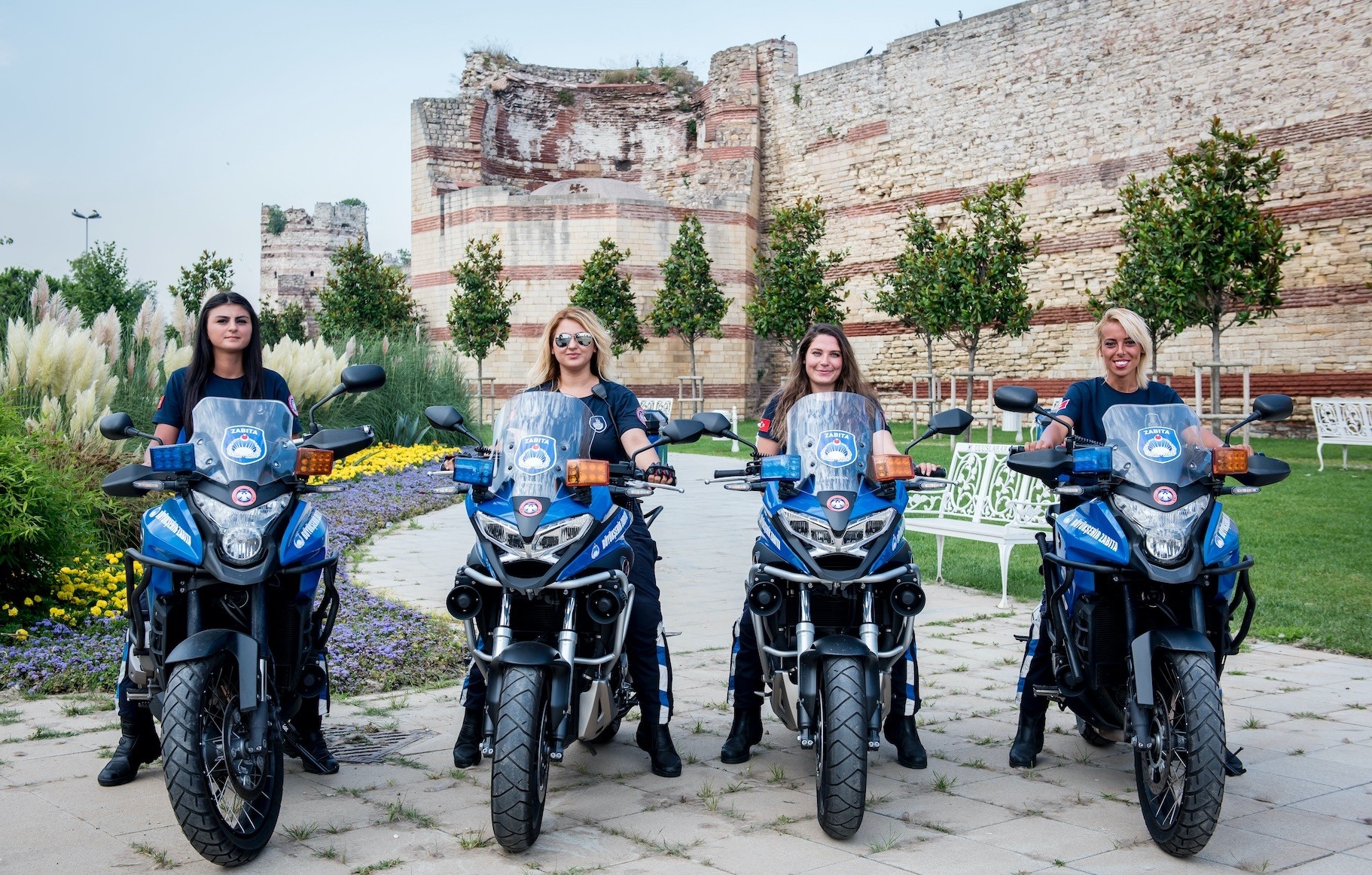 To the surprise of drivers across Istanbul, who sometimes stop to snap a photo with the city's newest police officers, the first female municipal police officers have started to work on the team of the İBB Motorcycle Troops and are giving no quarter to street traders in traffic across the city

We are moving forward to the E5 Highway's Mecidiyeköy crossroad. Traffic flow is extremely slow. Street traders, on the other hand, are on the job. Some of them sell bottled water, while others sell flowers. In the past, the number of street traders opening booths on the road and selling goods in boxes and baskets has been vast. However, now the number of street traders has been drastically reduced, as law enforcement officers crack down on their business.

The reason for the change is the Motorcycle Troops of the Istanbul Metropolitan Municipality Directorate of Municipal Police. Known as"atmaca" (meaning "hawk" in English), motorcycle troops have been deployed for faster intervention against street traders who densely populate traffic spots. After the new project, which at first had 20 personnel and 10 motorcycles, began, it rapidly improved in a short time and the number of personnel increased to 117 with 33 motorcycles deployed, amid plans to increase that number.

Upon hearing about the four women who are the first female personnel of the Istanbul Metropolitan Municipality (İBB) Directorate of Municipal Police, we took off to find the Atmaca Motorcycle Troops in Istanbul traffic. These four women are motorcycle lovers who are serving the city with love and a smile on their faces. The female motorcycle troops we saw on guard at the E5 Highway's Mecidiyeköy crossroad said, "We are the smiling faces of the municipal police!"Driving out with them, we listened to them speak about their passion for motorcycles and the adventures they have experienced on the job. We also observed their relationship with the street traders selling goods in traffic, known among Turkish people as "eldeciler."

Meral Nilüfer Güneş: 'People think of us as police at first glance' 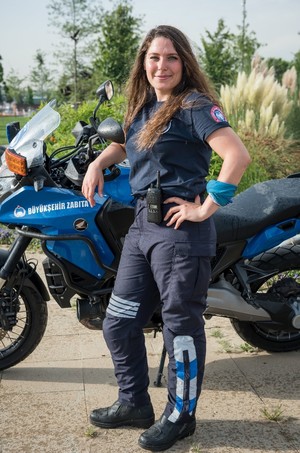 Meral Nilüfer Güneş has served as a female municipal police officer for three years. Although she has a degree in management, Güneşpreferred serving in the municipal police to any other job. When she first started, street traders and drivers who came across the uniformed troops on motorcycles hesitated, unsure if these were policewomen they were seeing on motorcycles. "People who see us in traffic get surprised. There are even some who want to take photos with us. Street traders, on the other hand, are really shocked upon realizing that we are women when we take our helmets off. They even try to escape after getting over their surprise," Güneş said.

Merve Ateş: 'I defended myself with kick boxing on my first day on the job' 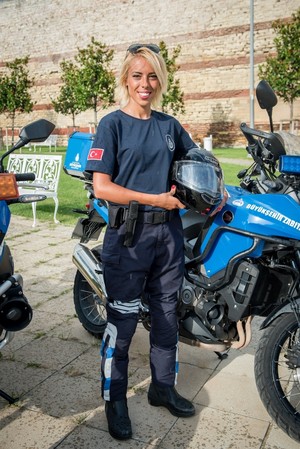 Merve Ateş, who learned how to drive a motorcycle secretly as her family did not approve of the idea, has been really pleased since accepting the job. During her first day on the job, she was met with harsh reactions by a street trader when she tried to seize his water bottles. "While I was fetching the water bottles of a male street trader, he realized that I was a woman and tried to push me away, holding me by the arm. He undermined me thinking that he could overpower a woman. I managed to defend myself because I have done kickboxing since I was a child," Ateş said.

Seda Bülbül: 'The job is stressful, but I serve with love' 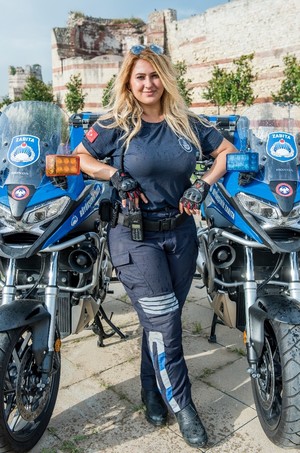 Seda Bülbül started to work as a female municipal police officer four months ago. Although her family thought that driving a motorcycle would be dangerous, she insisted and learned how to use the vehicle. Buying her own motorcycle after saving money five years ago, she immediately applied for the position upon hearing about the job and was accepted. "I started to work with the motorcycle troops after completing two months' training. We are on the motorcycle for eight hours a day, however I enjoy the working hours as I like driving my motorcycle," Bülbül said.

Fatma Tuğçe Çevik: 'The job is perfect for me' 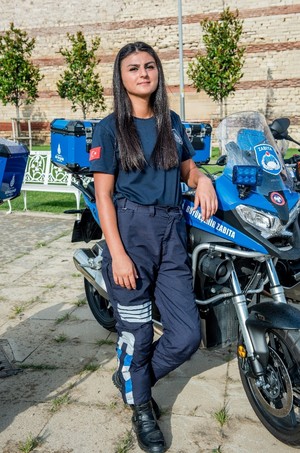 First riding a motorcycle at the age of 15, Fatma Tuğçe Çevik did not prefer serving in her own sector of logistics, due to her passion for riding her vehicle of choice. She even worked as motorcycle courier prior to taking her latest job. Saying, "The job is perfect for me," she applied for the position. By learning every single detail of the motorcycle during training, Çevik improved her motorcycle navigating skills. "When the training is completed, the number of municipal policewomen will increase up to six. I'm already looking forward to hitting the roads," says Çevik.

A flower seller in Mecidiyeköy named Emine Çalıoğlu often encounters municipal police officers. However, upon seeing the female troops, she became really shocked. "While I was pleased to see that the motorcycle officers are women on the one hand, I was upset on the other, thinking that they would not be able to do the job. But it is their mission, they have to do it," said Çalıoğlu. Another flower seller, Arzu Seyrekbasan, says: "When the municipal police come, we try to run. However, with the motorcycle troops, things are getting difficult for us. They immediately take the goods from us and we are issued a fine. I was really shocked when I first saw the female motorcycle troops. Nevertheless, it is good for us as women. They are smooth."

The head of the İBB's Motorcycle Troops of Municipal Police, Hasan Bitişyılmaz has served as a municipal police officer for 30 years. Bitişyılmaz said that compared to the past, the number of street traders and their sales have considerably decreased. Along with the motorcycle troops which were put into practice to crack down on the street traders working in traffic, the municipal police began to be more efficient on highways like the E5, E6 and at the entrance of the Eurasia tunnel. "We direct the team in light of data taken from the Command and Control Center. Thanks to public complaints, we know the spots where street traders are seen most and we direct our motorcycle troops to those locations, according to the post system. We made vast improvements in a short time and are fighting the street traders in traffic," said Bitişyılmaz.