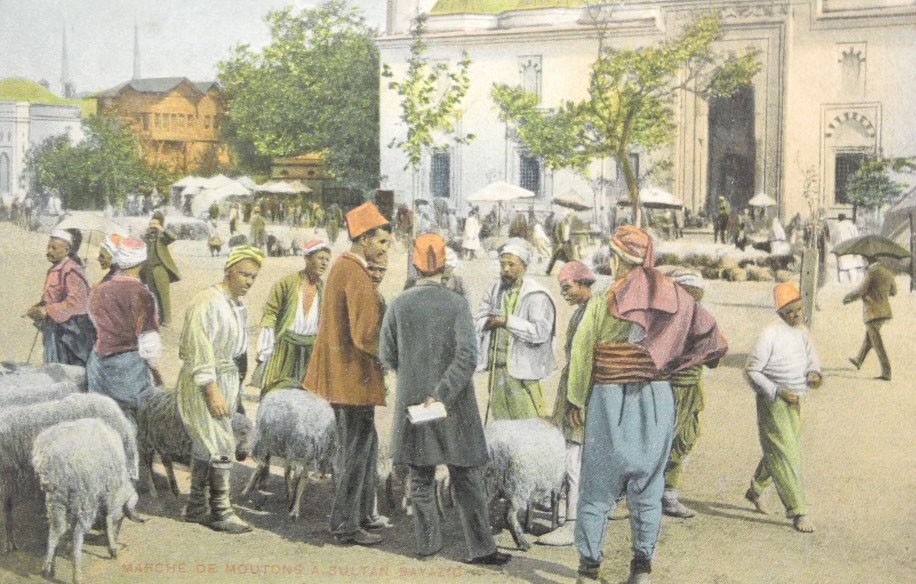 The ritual of sacrifice is observed by many traditions and religions, and, Turkic people, even before accepting Islam as their religion, are known to have practiced this tradition and continue to follow it during Eid al-Adha

Sacrificing a living creature in the name of God is a common ritual in many religions, both Abrahamic or otherwise. Generally, an animal is sacrificed, but there were communities that practiced human sacrifice such as the Aztecs, Egyptians, Phoenicians and Vikings. In Greek mythology Menelaus sacrificed his daughter Iphigenia to be able to survive a storm, which is a famous case of Greek tragedies.

Jews sacrificed the first products of their fields. The Bible mentions the sacrifice rituals that Jesus attended. Adam's two sons offered a sacrifice to God, but the sacrifice of a son with sincere intentions was accepted by God and it resulted in the murder of Abel by his brother Cain.

Sacrificing oneself is a sign of great devotion. In the Turkish language, the phrase "kurban olayım," which means "I will sacrifice my life," is the greatest way of praising a loved one. "Kurban," or "qurban" means sacrifice in Arabic. People try to get closer to God with sacrifices. In Arabic, the term used for qurban is "udhia" as it is practiced during "dowha" time. The term used for Qurban Bayram is Eid al-Adha as well. Being a word of Semitic origin, qurban is also mentioned in the Torah.

Words used for "qurban" in a religious sense in all languages are close to each other in terms of meaning. For example, "sacrifice" means to serve something to God, "offering" means presenting something to God as a gift. The term "minha" used in the Torah means bestowment while the term "zebah" means letting of holy blood.

Before their conversion to Islam, there were traditions of sacrifice - with and without blood - among Turkic people, conducted with the motivations of offering a present to God, protecting themselves against evil and for the spirits of their ancestors. This ritual was orchestrated next to some specific stones or trees, allocated for the ritual on the days of the equinoxes. These spots were adorned like festival areas. Turkic people in antiquity did not have the tradition of human sacrifice. They sacrificed horses, rams, sheep and deer. These animals were not chosen randomly.

For example, only white horses could be sacrificed. The animal chosen for sacrifice to dispose of evil had to have horns. The bones of the sacrificed animal were not broken, but buried or hung on a tree in a pouch. Another sacrifice ritual was pouring mare's milk on the ground, which was an example of sacrifice without blood. 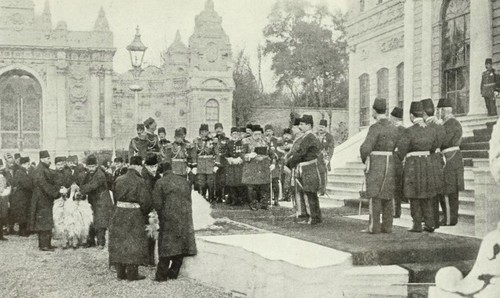 Ottoman Sultan Mehmet V reads a prayer just before the sacrifice of a ram during Eid al-Adha in the courtyard of Çırağan Palace.

The roots of the sacrifice tradition in Islam dates back to Abraham, known as Ibrahim in the Islamic world. The famous story mentioned in the Abrahamic books is as follows: Abraham, who is old and cannot become a father, promises God that if he gives him a son he will sacrifice his son for the sake of God. And God gives Abraham a son and then reminds him of his promise. The boy in discussion is Isaac, or Ismael in Islam. Isaac tells his father to obey the order. No matter how the devil tries to prevent Abraham, he cannot.

In the end, God bestows Abraham as he kept his promise and Ismael due to his trust in God with a beautiful ram sent from heaven and Abraham sacrifices the ram. They cook the liver of the animal on embers and eat it and distribute the rest of the meat to the poor. The tradition of grilling and eating the liver of the sacrificed animal originates from this story. The same story is also told in the Bible.

There is a similar story about the father of Prophet Muhammad, who was a descendant of Abraham. The grandfather of Prophet Muhammad, Abd al-Muttalib, who was one of the notables of Mecca, grieved while searching for the Zamzam well with the curing water. Explored by Isaac, the Zamzam source has been lost over time. Muttalib, who had no child to help him, made a vow: "If I have 10 sons, I will sacrifice one of them for God."

As his prayer was accepted, Muttalib was warned in a dream. All the lots drawn among his sons according to the traditions of the time showed his son Abdallah as the one to be sacrificed. A priest advised Muttalib to draw lots between Abdullah and 10 camels, which were equal to the life of a man who was murdered at the time of the vow. "If the results show the camels, sacrifice them, if it shows Abdullah, increase the number of camels 10 at a time," the priest said. The lots showed the camels when their number was increased up to 100. Muttalib sacrificed the camels. The method of paying 100 camels for someone killed without deliberate intent dates back to this. Hence, Muhammad meant his father Abdullah and great-grandfather Ismael when saying "I'm the son of the two sacrificial people."

The sacrifice of an animal can be practiced on Eid al-Adha, which occurs on the 10th to 13th days of Dhu al-Hijjah, the 12th month of the Islamic lunar calendar. These days are also when pilgrims perform the hajj to Mecca. It is allowed to sacrifice an animal on other days, but it is regarded as a voluntary practice. An animal is sacrificed, as it is a divine order, and this practice shows one's faith in God. At the same time, sacrificing animals indirectly contributes to world peace, as it fulfills the human instinct to shed blood.

In Islam, it is required as specified criteria of wealth to give an animal sacrifice for God. However, during the Ottoman era, almost everyone sacrificed an animal during Eid al-Adha. It was easy to afford a sacrificial animal. In villages, everyone had a herd of sheep in one way or another and they sacrificed one of those animals. Those living in cities, however, sacrificed an animal at Eid al-Adha, saving the money spent for meat while the poor roasted the meat to eat it throughout the year.

In the past, herds of animals were brought to Istanbul from Anatolia. Kept out of the city walls, these herds were sent to the city in groups to be sold. Generally, everyone sacrificed their animal on their own. Those who did not know how to conduct the ritual arranged a butcher beforehand and gave him a present after the ritual. The gardens of houses were suitable for the ritual. There were also many fields in cities, so the streets were not home to nasty scenes. As all parts of the sacrificed animal are thought to be holy, the entrails were buried.

In the past, people generally sacrificed sheep. Beef was not popular then, it was hard to find and was not preferred for eating. Mutton was desirable. Female animals are not generally preferred as they give birth to offspring and provide milk. They were bought a few days before the holiday, fed in the garden and adorned. People applied henna to the sacrificial animals and slaughtered them after the holiday prayer.

If there were children at the house, they sometimes did not want the animal to be sacrificed as they became friends with the animal. Family elders convinced them with various promises or bought them some other animal so that they would not be upset. They used to take the children to the sacrifice place so they could get used to the ritual, have their foreheads marked with the blood of the sacrifice and consoled them by saying this animal would welcome them in the heaven.

Wealthy families took one-third of the meat for the house and distributed the rest to neighbors, relatives and the poor. Those who did not distribute the meat despite their wealth were criticized. The pelts of the sacrificed animals were tanned and used in the house. As animal fat was in demand, it was fixed into jars to be used for cooking. It was possible to find knives, cleavers and chopping boards at every house. Meat was minced on the chopping boards at houses with special knives. Hosts offered roasted meat instead of sugar and dessert to holiday guests.

If Eid al-Adha corresponds to a date between engagement and the wedding ceremony, the groom's family sent a ram to the bride's house as tradition required. These rams on which henna was applied were adorned and sent to the bride with gold fixed onto its horns.

Sacrifice in the Ottoman palace

In Istanbul's Rami district, there were people in charge of caring for the animals of the Ottoman palace. The sacrificial rams raised in Rami were adorned and sent to the palace with pomp. They were sacrificed during a ceremony attended by the sultan. The sultan gave 40 animals to be sacrificed. People at the palace observed the ritual from the windows and then all the meat was distributed to the poor. The sheikh al-Islam, who was in charge of all the religious functionaries, presented a ram to the sultan as a sign of privilege and the sultan bestowed five rams to sheikh al-Islam in return.