Kickboxer sisters power each other up for more gold medals 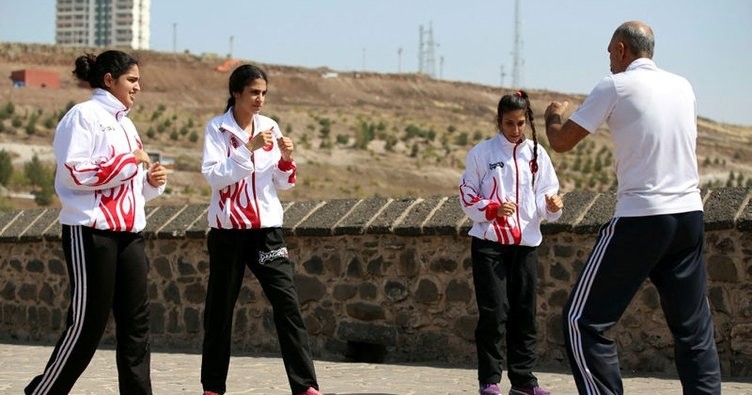 Stripping away the norms that the society they live in cut out for the girls, the Zilan Sisters continue to win medals at kickboxing and muay thai championships around the world

The three siblings' interest in kickboxing and muay thai came from their father, Abdullatif Zilan, a kickboxing trainer in Diyarbakır's Sur district. Having achieved major success in competitions and championships, the Zilan sisters are currently training for upcoming championships with their father and plan to teach these sports to other athletes in the future.

Practicing kickboxing and muay thai in their 65-square-meter home and at outdoor areas across the city, Sultan won the world championship twice, while her sister Esmer became the Turkey champion three times and Zeynep became the champion once.

Surpassing nine of her rivals at the Muay Thai World Youth Championship organized in Thailand, Sultan Zilan, 16, spoke to Anadolu Agency (AA) and said she started to do sports at the age of 10 and attended numerous contests while developing her skills over time.

Explaining that muay thai and kickboxing are defense sports, Sultan Zilan said, "We don't do these sports to harm people."

Sultan remarked that kickboxing and muay thai are not popular among the girls in Diyarbakır, adding:, "I hope that other girls do these sports, however, we don't have suitable areas for exercise. We exercise wherever we find a suitable place. In the morning, we do the first exercise of the day with the punching bag in our garden and then work at the parks around Sur. Afterwards, we pass on to Gözlü Bridge and continue to work out there."

"At the Turkey Championship held in March, there were 34 athletes in my weight category. I became the champion of Turkey and had the right to compete in the world championship as part of the national team. At the championship in Thailand, I had nine compelling rivals. I went there to be the champion. I reached my goal and returned to my country with a gold medal," said Sultan Zilan.

A student at Dicle University's School of Physical Education in the Department of Coaching, Esmer Zilan, 22, has also been doing muay thai and kickboxing for five years and has three Turkey championships.

Motivated by her father, Esmer Zilan started doing the sport at the age of 17. Stating that she is busy with the sport all day long, she added, "My father is my trainer. At the same time, I learned everything thanks to him. We, as a family, are busy with this sport. We exercise at our 65-square-meter home in Suriçi by our own means. As our father trains us personally, we develop our skills faster. It is hard to achieve such success despite all the impossibilities."

Saying that she was defeated at every contest at first, she exercised more and succeeded in the end, stressed Esmer Zilan.

"People call us 'the golden girls of Dicle, having grown up in Suriçi.' We are lucky as our father is a trainer. Most of the girls here do not have such a chance or opportunity. If we are supported and provided with a sports hall, so many girls may become champions," said Esmer Zilan.

On the other hand, 17-year-old Zeynep Zilan also said the exercises were extremely difficult to her at first, adding, "Muay thai seems like a men's sport, however, girls also can do it easily."

Zilan said her female friends envy her for her muay thai skills and added, "It is a harsh sport but you want to do it more as you get used to it over time. It was really difficult for me to participate in the Turkey Championship for the first time and I was defeated. I started to work harder with more ambition and became the Turkey champion in 2014. Now, I've been working for the Turkey Championship, which will be held in 2018. My target is to win the world championship and I believe that I will achieve this."

Father Abdullatif Zilan said he started to do muay thai in his childhood and desired to train, which he did eventually.

Explaining that the gym he founded in Diyarbakır's Sur district was ruined due to terror attacks, Abdullatif Zilan said, "I have five children. Inspired by me as an athlete, they wanted me to train them so that they could participate in the Turkey Championship. I trained them and we got local, Turkey and world championships within time. I trained the children by my own means. There were times when I hung a punching bag in the house to train them. Our aim is to win the world championship and represent our country and flag."

Asking for support from local officials, Zilan once more stressed that his children have achieved success despite harsh circumstances.

Abdullatif Zilan noted that he can train children and youth who have an interest in this sport if he is supported, expressing how proud he is of his daughters.