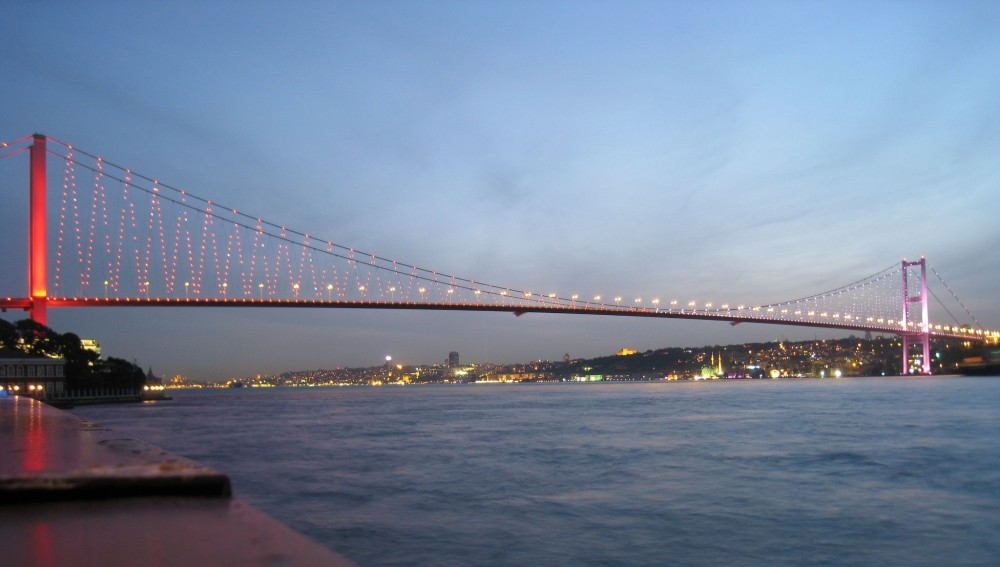 A view of Istanbul's July 15 Martyrs Bridge (formerly known as Bosporus Ku00f6pru00fcsu00fc). Istanbul, one of Turkey's largest citites, draws the most foreign investors to the country.
by Boğaç Çekinmez Oct 05, 2017 12:00 am

Despite the global smear campaign targeting Turkey over the last couple of years, there is no doubt that Turkey has returned to the ring, becoming a center of attraction for foreign investors

In the meetings I have had with foreign business people in recent days, I have frequently heard them say that due to the speculative discourse by politicians in their home countries, the investment environment in Turkey is legally insecure. At this point, I think it would be wise and necessary to tell right from wrong and correct the perception of Western business people, specifically. I would like to emphasize that Turkey, once again, became an attraction for foreign investments in 2017, despite all the negative discourse targeting the country.

An analysis of the change in Emerging Stock Markets in the first seven months of 2017 indicates that Turkey (37.6 percent) outperformed India (22.1 percent), South Korea (18.8 percent), Taiwan (12.7 percent) and Indonesia (10.3 percent) by far. Turkey's positive outlook is also reflected in the figures regarding foreign direct investment (FDI) in Turkey. In the first half of 2017, Turkey increased its incoming foreign direct investments by about 50 percent on a year-to-year basis, to over $4 billion. At this point, it is worth noting that legal stability and the feeling of confidence in law are without a doubt important, terms of reinforcing the confidence that foreign capital and direct investors have in the market.

To that end, in terms of domestic law, Turkey should monitor and stay ahead of recent global developments and ensure that the legislation and structural changes, as required by the principle of the right to fair trial, are up to date. In addition, the sustainability of the contemporary legal know-how and experience of judges, prosecutors and expert witnesses should be ensured.

In terms of international law, the matter is regulated by the international conventions and agreements to which Turkey is a party. It should be emphasized that Turkey is also a member of various international organizations such as the Organization for Economic Co-operation and Development (OECD), the World Trade Organization (WTO) and the World Bank, to guarantee the commercial operations by foreign investors. Turkey has signed the entire set of key conventions and treaties which influence trade operations in the free market; including but not limited to the U.N. Convention on Contracts for the International Sale of Goods (CISG) and the Energy Charter Treaty (ECT), adopting transparent and competitive policies in the process and aligning its domestic legal and regulatory procedures with the international norms.

Turkey has been a candidate for full membership to the EU for a long time and is a member of the Customs Union, pursuant to the relevant agreement signed. Therefore, the fundamental legislation elements concerning companies such as the Turkish Code of Obligations, the Turkish Commercial Code, law on foreign direct investments, capital markets law, law on the protection of competition, law on intellectual and artistic works and the law on industrial property are aligned with the acquis of the EU, Turkey's main export and import partner.

It is now necessary to provide a more detailed explanation on legal protection for foreign companies in Turkey. Being aware of the importance of foreign investment for a developed economy, Turkey has become one of the countries to impose the least legislative restrictions on foreign investors, according to 2016 data from the World Bank. Turkey offers a very simple and fast procedure for foreigners, so that they can incorporate companies to make investments. Following the entry into force of the new Turkish Commercial Code in 2012, it is now possible to incorporate a company with one single shareholder. I would like to express that this emerges as an advantageous option for foreigners to choose to incorporate "joint stock companies" in line with the recent amendments made, when the ease of management, the opportunity to organize quorums flexibly and benefit from favorable tax liabilities are considered in the said type of companies. In this framework, foreign real or legal persons - even as a single person - are able to invest a minimum capital of TL 50,000 ($14,000), complete all relevant registration and announcement procedures and, thus, incorporate a joint stock company within a week's time. Persons incorporating joint stock companies in Turkey can select all members of the board of directors of their companies from among foreign nationals who do not reside in Turkey. Companies incorporated with foreign capital and/or foreign executives receive equal treatment as Turkish companies, without being subject to any kind of discrimination and also benefit from the same incentives and tax exemptions as the latter under the same conditions.

States conclude bilateral agreements for the mutual protection and promotion of investments in order to improve the existing economic cooperation between them, maintain the investment environment, and ensure the most efficient use of resources. Such agreements are highly important for foreigners investing in a country. They aim to set the extent of procedures to be imposed on investors by the host country and protect their fundamental rights and interests within the legal system of the country they choose to invest in.

Turkey has signed bilateral agreements accordingly, for the mutual protection and promotion of investments with about 100 countries, including but not limited to, the leading economies of the world such as China, the U.S. Japan, Germany, the U.K. and Russia. Therefore, foreign investment companies incorporated in Turkey are under the extensive protection of the basic principles stipulated in the said bilateral agreements and are explained below:

The principle of fair and equitable treatment is a broad concept with various sub-principles. Meeting the legal expectations of investors, compliance with legal and procedural rules, stability, transparency, good faith and non-discrimination together constitute the basis of this principle.

The national treatment principle guarantees that the host state will not accord to the investors from the other contracting party any conditions that are less favorable than those it grants to its own investors. This makes it possible for domestic investment companies and foreign investment companies to operate on a level playing field.

In agreements that include the principles of nationalization and expropriation, states guarantee that they will pay the actual amount of investment in the said cases as soon as possible and, thus, protect the investment and investors against the risk of negative and disproportionate use of public force.

The transfer of returns principle allows foreign investors to freely transfer any returns abroad, as well as proceeds and dividends they obtain from their trade operations in the host country.

Last but not least, arbitration allows for the settlement of investment disputes through international arbitration, in addition to resorting to the judicial system of the host country. To this end, it should be stated that, even if an arbitration clause is not included in commercial agreements between the host state and the foreign investors, it is possible to take legal disputes that arise from the investments concerned to international arbitration, thanks to the agreements on the mutual protection and promotion of investments.

The remedy of arbitration is usually resorted to in the case of technical legal disputes which include a diverse range of legal practice areas and require expertise. In such cases, not settling the dispute via the courts but rather an arbitration tribunal which is comprised of the arbitrators appointed by the parties increases the possibility of obtaining a fair and equitable judgment at the end of legal proceedings. Furthermore, expert attorneys at law use comprehensive evidence and write detailed petitions to settle disputes rapidly, a factor reinforcing the confidence companies have in achieving justice. In this framework, foreign companies are cognizant of the fact that if a dispute arises while they are investing in Turkey, they will be protected by not only the Turkish courts but also the international arbitration proceedings.

At this point, it is considered as useful to evaluate the elements ensuring foreign investments. One of the leading sources of motivation for foreign investors is the expansion of the goods and services market offered and having access to new sources of production and increase of efficiency. Turkey's geopolitical location, its young and dynamic population that is keen on production and consumption, and its readily available facilities and plants with fully-completed infrastructures present a huge opportunity for foreign investors to engage in trade operations in our country which allows for creating employment and obtaining foreign exchange earnings.

It is required to use any opportunity to explain to foreigners the assuring reforms by our state, which progresses towards its global goals and has disclosed new incentives packages in the process, and invite them to incorporate new companies and establish partnerships through mergers and acquisitions. In the globalizing world, as Istanbul prepares to emerge as a global financial center, the action to be taken to ensure that foreign capital companies and partnerships permanently operate in our country must definitely be an important item on our legal and economic agenda. I hereby assuredly invite my friends doing business abroad to come and invest in our country with peace of mind.