A Game of Risk 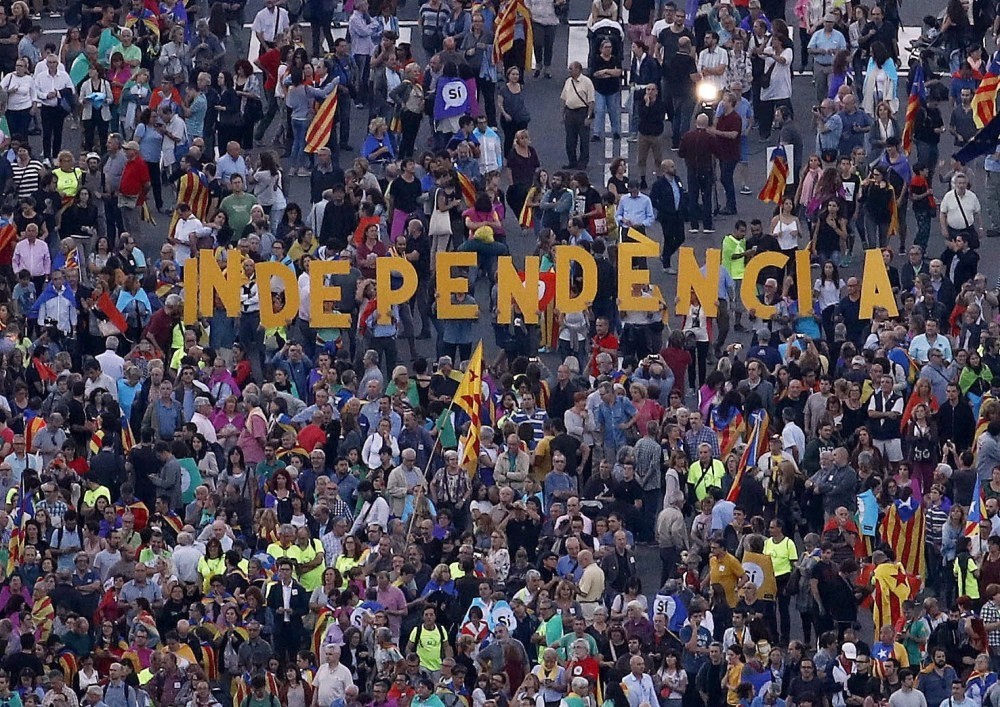 Catalans gather to call out to the Spanish government for their demand for independence.
by Jane Louise Kandur Oct 14, 2017 12:00 am

The world was once made up of great empires. Now it is made up of nations. And with an ever-increasing number of referenda on independence, it seems that the number and size of these nations may start to change at a rapid rate

A comedy trio from Ireland, Foil Arms and Hog, do a wonderful sketch of nations playing "Risk." This game of conquering the world is especially treacherous for the British player:

Then it is the American's turn: "Boys, I'm going in the Middle East" "No that's not how the game works. You need to be beside the country you're attacking." "You just try and stop me"

Spain takes their turn: "I want to invade Espania" "I thought you were Spain" "I am not Spanish. I am a Catalan."

The "referee" asks: "Britain why are your troops in the middle of the ocean.?" "Oh their not...." replies our brave player. "That's Gibraltar and they're the Falklands [...] I just assumed they were mine." When Switzerland is asked to play the answer is that they have no armies and thought the game was Monopoly, not Risk. And then everyone (but Russia) decides to invade Africa. Russia takes this opportunity to invade Europe.

The sketch is not only incredibly funny; it accurately reflects the way the world was, and still is to a certain extent. India, New Zealand, Sri Lanka are all independent. But the breaking up of great nation states continues. The great empires - Russian, Austria-Hungarian, Ottoman, British [...] these are long gone. Others, not so great, for example the Belgian empire, which consisted of one colony - Belgian Congo, left huge scars in the countries that make it up today. The territories that Belgium left behind did not have the necessary infrastructure for independence, and little experience in self-government. "Political instability created by tension between clan and central leadership in what is now the Democratic Republic of Congo and tribal rivalry leading to genocide in Rwanda, are at least in part the result of a colonial legacy that took far more from Africa than it gave." (new world encyclopedia) Unfortunately this is true for most of the African continent.

The great empires are gone. Larger conglomerations of nations, like Yugoslavia, or the Russian Federation have broken up. And now countries that we have come to take for granted are threatening to break up. The Scottish referendum, which ended in a "No" vote, is on the agenda again. Catalonia has voted to leave Spain, even though Spain says: "Um, no you can't leave." And this is just the tip of the iceberg; there are many regions, large and small, out there which desire to become independent nations.

At the beginning of this month voters in the Catalan region went to the polls. Residents in northern Iraq also went to the polls. Both were voting for whether or not their regions should be independent from the larger country (Spain and Iraq). Ninety percent voted for independence in Catalan, but only 42 percent of the eligible voters turned out - the rest saw the vote as not legal. In northern Iraq, the turnout was around 70 percent, with 93 percent voting for independence.

Both results are problematic. A 42 percent turnout means that the majority of the country did not even want to participate in the vote. The 70 percent of northern Iraq, that is the failure of 30 percent to turn out, may seem respectable for Western elections. But in this part of the world turnout is usually high, and 70 percent is well below this norm. The fact that a percentage of the voters failing to turn out were not of Kurdish ethnicity, but of Turkmen and Arab ethnicity; these sections of society do not want to live in a Kurdish state.

If northern Iraq becomes independent this will have repercussions in a region that is already struggling against huge, enormous challenges. With the Syrian war, Daesh, and other regional problems, really the last thing the region needs is a conflict within Iraq.

The history of Catalan is a bit different from that of northern Iraq. Catalonia had had its own governmental institutions up until the 18th century. But more importantly, there are many who think that the Catalonian independence movement is actually just jostling for a better bargaining position. At a time when Spain is spiralling into recession (the worst in 60 years) - unemployment is at 25 percent - the powerhouse of Catalan may just want a better deal with the central government.

But if the Catalan region becomes independent, it will not automatically be a member of the EU. This was the case often brought to the fore during the Scottish referendum. Could Scotland (or can Scotland) really go it alone? If Catalonia becomes an independent state, it will be outside the EU, at least to begin with. It will have serious challenges in front of it.

But if Catalonia does become independent, it could open a huge can of worms. There is a long queue of regions that want to bid for independence.

Cornwall, another region of the U.K., wants to go it alone. The argument is that in recent years, Cornwall has been neglected by Westminster, and must act to "protect the inheritance of its people." Cornwall contends that although not recognized as a country, as are Scotland, Wales and Northern Ireland, it is a Duchy and should be able to be autonomous.

On the other side of the Atlantic, both California and Texas have movements to bid for independence. Although it is not legal for any state to secede from the U.S., both are making quite a lot of noise. While there are provisions in the constitution to admit new states, there are no provisions for leaving. Unlike the European Union, the United States is constitutionally united, with no other option. The power of the federal government was established after the Civil War, and without the say of the federal government no state can secede. And it is not likely to let such powerhouses as Texas and California, large and wealthy states, to set off on their own.

The fact that Texas was independent for a decade between leaving Mexico and joining the U.S. however keeps the dream alive for some. The Joint Resolution for Annexing Texas to the United States declares that Texas can divide itself into "New States of convenient size not exceeding four in number, in addition to said State of Texas." However, this does not allow Texas to leave the U.S.; it merely allows it to divide itself into smaller states.

There is a fringe political group in California that wants it to break away; this came onto the agenda again after President Trump was elected. The group is planning to hold a referendum for Californians to secede in 2018. The leader of the Calexit movement, Marcus Ruiz Evans, stated that, "[...] California needs to have an exit plan in place. Things are going to get worse in this country before they get better and this campaign all along has been about California disconnecting itself from a sinking Titanic."

There are other regions that want to break off from their mother countries, for example, the Basque region in northwestern Spain. In Italy, Veneto and Lombardy will hold consultative referendums on Oct. 22 to ask voters if they want to be independent from Rome.

The New Flemish Alliance wants Flanders, the Flemish speaking region of Belgium, to separate from the rest of the country.

France also faces challenges with Corsica, an island in the Mediterranean home to over 300,000 people. The island has its own language, and wants to be independent. Corsica at the moment is autonomous, but on Sept. 22 the Corsica assembly reiterated "the indisputable legitimacy of the government of Catalonia."

Denmark's Faroe Islands, home to 48,000 people, will hold a referendum in April 2018 on a new constitution that would grant self-determination. The Faroe Islands have been autonomous since 1948, but autonomy is not independence.

And there are more. Ryukyu in Japan wants to be independent from the central government; Bougainville in Papua New Guinea, the Xinjiang region in China, and Bavaria in Germany are all demanding more freedom if not outright independence. And who knows what new regions will start to stand up and demand autonomy, followed by independence?

What defines a nation, its borders and its citizens is something that is in flux at the moment. For centuries, language was seen as the main identifier; local languages were suppressed, banned or allowed to die out. In recent years, local dialects and languages have been encouraged and supported; they are taught in schools, broadcast and printed. Has this movement led to the plethora of independent movements? Is it language and ethnicity that make a nation? Or is it something greater, something that encompasses but surpasses language, religion or ethnicity? These are questions that are being asked, and until the world can agree what makes a nation, and what role the central government of the said nation should fulfill, independence movements will continue to rise up and referendums will continue to be held.