What is the future for the EU? 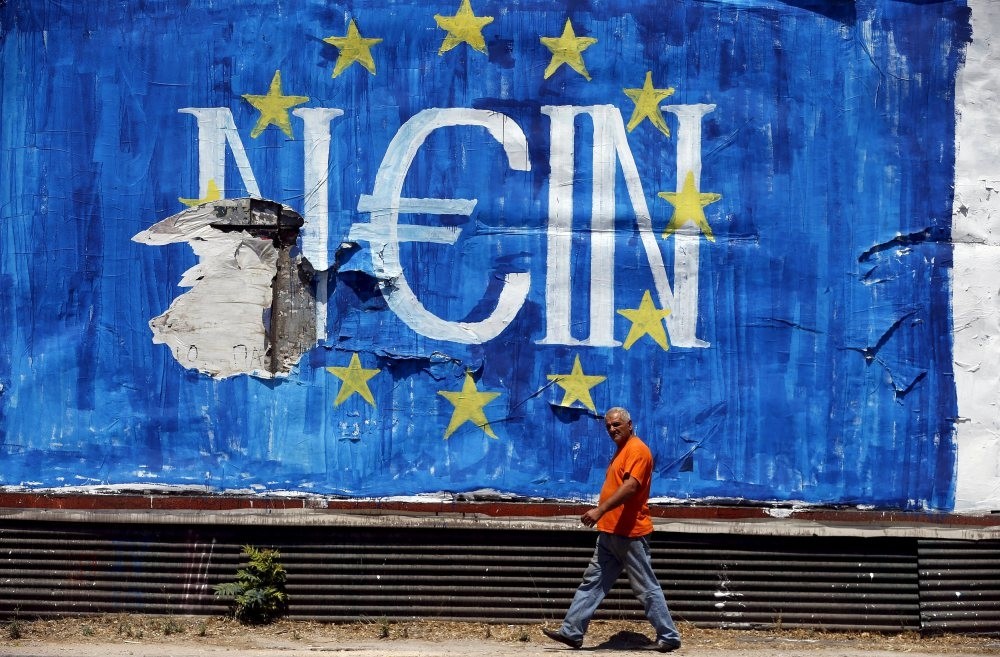 A man walks past graffiti in Athens amid discussions on whether to keep Greece in the eurozone or not. The Greek situation is likely to become another crisis in the EU in the near future.
by Jane Louise Kandur
Nov 04, 2017 12:00 am

The European Union is facing unprecedented challenges: Britain has voted to leave and Catalonia, after proclaiming independence, has found itself outside, which could spark more independence bids in Italy, Germany or other countries, with Pope Francis last week calling on the European Union to 'recover the sense of being a single community' or face a grim future

The EU, as we know it today, came into being in 1993 with the signing of the Maastricht Treaty. The EU, the seeds of which were sown with the creation of the Council of Europe in 1949, is quickly approaching its 25th birthday.

As it approaches its Silver Jubilee, things in the EU are far from sunny. Not only is the Pope calling for greater unity, Jean Claude Juncker, president of the European Commission, the most powerful institution in the EU, said that the EU must start to show solidarity or it would suffocate. Even the French President Emmanuel Macron is suggesting that talks with other partners, like Russia and Turkey, should be held and these parties should be listened to.

Britain has voted to leave the union. Catalonia has removed itself from the union - wittingly or unwittingly - by voting to be independent of Spain. Not only is Europe shrinking due to members leaving; although the Greek crisis may seem like a distant memory, the Greek situation is likely to break out into another crisis in the very near future. Greek unemployment is at 40 percent, and despite having done all the legal machinations imposed by the Troika, nothing much has changed structurally.

The cries for solidarity, for union, refer to the general atmosphere that has arisen in the EU after the refugee crisis. For the most part, the refugee crisis is a crisis because some member states, in particular Eastern European countries, refuse to accept immigrants. Ignoring European Union directives, these countries are putting even greater pressure on other member states.

Why are the countries refusing to take in immigrants? The voters in these member states - voters who elect the national parliaments - are clamoring for no immigration. They have many reasons, justified or not, including employment, security and nationalist sentiments. Brexit, for many voters, was directly linked to immigration. The national governments find themselves trapped between their voters and EU directives.

But there are deeper fault lines than immigration or independence movements that threaten the EU's future.

In 2012, the EU was awarded the Nobel Peace Prize. The creation of the union had ensured that there have been 60 years of peace in a region that had been at loggerheads for centuries. This is indeed a great feat, worthy of being acknowledged.

Yet the EU is not a simple structure. Consisting of 28 countries speaking 24 languages, it is a union that has a treaty-making tradition. It is said to be one of the largest economies in the world, producing one quarter of global production.

What EU legislation has managed to acheive is to take different laws and standards from 28 member countries and to replace them with central directives. This makes things easier for the manufacturer, and allows them to make products that will be bought by customers elsewhere in the region. This economic dependence has led to internal European peace and harmony.

But there are those who say that this arrangement only helps the large corporations. Due to the large number of regulations it is next to impossible to start up a small business in the EU. Only those who can hire expensive lawyers are able to do so, thus shutting the door in the face of start-ups and small businessmen.

Daniel Hannan, a Conservative member of European Parliament from the U.K., has said that the EU is a customs union, not a free trade area. When a country joins the EU they give up any right to sign bilateral trade treaties with other countries. Thus, Hannan says, trade is artificially directed towards the one bit of the world that is not growing. Member countries are unable to trade with entities outside the union on an individual basis.

But in addition to this economic obstacle, Hannan lays out a much more sinister objection to the EU. For the many reasons listed below, the EU is not democratic . Former European Parliament member and leader of UKIP, Nigel Farage, states that the EU is not undemocratic, but rather anti-democratic. I never thought I would say "Farage has a point", but Farage has a point.

Hannan tells us that the EU is not democratic because in a democracy, one should be able to hire and fire the people responsible for making and passing laws. The EU is not a functioning democracy. Bureaucrats make the rules. These European commissioners have been appointed, not elected. They are not answerable to the people.

Hannan claims that after the World War II, the leading elite were wary of democracy. After all, Hitler had been elected. This form of democracy was labeled populism and seen to be highly dangerous; that is, the elite did not trust the people to elect the "right" kind of people. Rather, they preferred to safeguard Europe by giving power to unelected functionaries. That is, says Hannan, public opinion is not seen as something that needs to be heeded, but rather as an obstacle that needs to be overcome. By labelling certain democratic victories "populist victories", those in power are able to ignore the voice of the ballot box. They approach the results of such populist votes as something to be circumvented or overcome, rather than as an impetus to re-examine what the people want or what the politicians are delivering. And this is what Farage gives as his reasoning when calling the EU "anti-democratic". It goes out of its way to avoid democratic norms. If a referendum comes up with a result they don't like, the EU elites merely wiggle around it or ignore it.

So far so good. But then France, a founding nation of the EU, held a referendum. 55 percent of the French people said No. Then almost immediately afterward, the Netherlands held a referendum. This time 62 percent of the people gave a resounding No vote. But the European Commission did not say let's rethink this. Perhaps we should rewrite the constitution. Perhaps this is not what the people want. No, rather they said: The people have misunderstood what is being proposed. We need to teach the people better, to make them understand that this is the only alternative available.

That is, according to the EU bureaucrats, the people were wrong. The EU elite was, of course, right.

Hannan expresses this best: "No one said 63 percent of Dutch people have delivered a verdict, and maybe we have to deal with this new reality." He goes on to quote Bertolt Brecht's poem "The Solution," which was written subsequent to the June 17, 1953 uprising in East Germany. Hanan quotes the final line: "Would it not be easier in that case for the government to dissolve the people and elect another?" to sum up this situation.

The constitutional crisis - that is the people voting against a European constitution - was solved by the EU elite circumventing the people. Never let it be said that a democratic result should stand in the way of what the European elite really want.

They redrafted the constitution as a treaty. A treaty does not need a referendum. A treaty could be ratified without referring it to that pesky body known as the people, the demos or public opinion.

At that time Martin Schulz - a European socialist - responded to the No vote with a bald sentence: "We must not bow to populism." Or, we need not listen to the people. They don't know what they are talking about.

In other words, the EU, due to its very structure, is cut off from the people. It is run by an elite who does not really care what the people want.

How has it come about that the voice of the people, the very heart of democracy, is being ignored and bypassed in the EU, an supranation that is lauded for its forward-thinking liberal approach to government? The Treaty of Lisbon sets out the conditions that a country must adhere to in order to join the EU. New supranational institutions take the place of old national ones. Most decision-making will be carried out by institutions like the European Parliament, the European Council, the European Commission, the Court of Justice of the EU, the European Central Bank, as well as institutions concerned with economy, foreign relations, defense and finances, and ultimately education and health.

But ignoring referendums was not just a trick pulled out of the hat when trying to pass the constitution. Just two years ago, 61 percent of Greek voters voted against another EU bailout. But their voices were ignored, and the Greek leaders had to bow to even more of the Troika's austerity.

After Brexit, Juncker claimed that the British had been brainwashed. The vote, he said, showed that there was something wrong in Britain. That is, according to Juncker, the British are totally incapable of thinking for themselves.

Last year the EU Commission ruled that Apple had to pay back 13 billion euros in back taxes, overriding the lower tax rate that the Irish government had introduced to attract foreign investment. That is, the incentives introduced by the national government were abolished by the supranational structure. Ireland stands to lose large investments due to this ruling.

In recent polls over 50 percent of the public in EU countries feel that their country was better off before Maastricht. In particular, southern countries and former Eastern Bloc countries have not done well out of the EU. One need only examine the gains that far-right, anti-EU parties have made in recent elections. People tend to vote more conservatively when they feel there is an outside threat. In addition, this growth in the far right, and continuing immigration has led to a new toxic environment in many countries which leads to the growth of all kinds of extremism.

We quoted "The Solution" by Brecht above. Although a bitter poem criticizing how an uprising against communism had been handled, it no longer takes a great stretch of imagination to see that Brecht's words can apply to how the EU views the people residing in this supra-nation.

"After the uprising of the 17th June

The Secretary of the Writers Union

Had leaflets distributed in the Stalinallee

Stating that the people

Had forfeited the confidence of the government

And could win it back only

Brecht has not stood logic on its head. He has drawn us a vivid picture of the problems of failed political movements like communism, things fall apart when it is the people who have to please the government. As democracy progresses, as we see more and more shocking, populist, election results, results which the world's democratic elite do not want to accept, the feeling that the powers that be, i.e., media, think tanks, corporations, Eurocrats, have no confidence in the people is becoming more and more obvious. It does not seem farfetched to expect some spokesperson for the elite to say that they no longer have any confidence in the people and that it is time to replace them.

Perhaps it would be easier for the people to dissolve the union and create another.