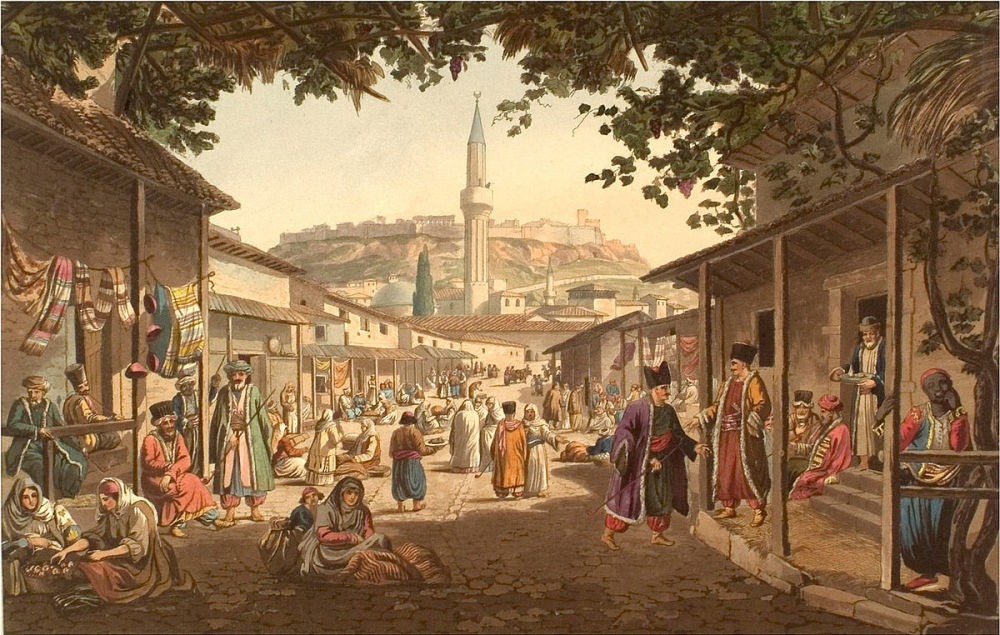 A painting of a bazaar in Greece depicting Muslims and Orthodox Christians living together under the rule of the Ottoman Empire.
by Ekrem Buğra Ekinci Nov 24, 2017 12:00 am

Greek Prime Minister Alexis Tsipras said the range of Islamic law implementation will be limited in Greece, but as international agreements require, the Muslim minority in Greece has the right to demand the implementation of legal principles of their religion

Non-Muslim communities in the Ottoman Empire had the right to demand the execution of legal principles of their religions and apply them to their own religious authorities for personal status lawsuits. In addition, they were exempt from the application of Islam's Sharia law. Muslim communities in Crimea and the Balkans in countries that declared independence from the Ottoman Empire were granted such a privilege in parallel with that bestowed by the Ottomans.

Today, the U.K. and Canada also bestow Muslims and Jews with the same right unilaterally. This is also the case for countries where Muslims do not have political power, such as Israel, Thailand, Philippines and India. In European countries such as Sweden, Sharia law is, although to a limited extent, observed in courts because of religious freedom.

After being ruled by the Ottomans for more than four centuries, Greece gained independence following the 1821 Greek War of Independence. In the aftermath of the Balkan War, Greece extended its territory by holding Ioannia, Thessaly, Crete, the Aegean islands, Rhodes and Western Thrace, the majority of which was populated by Muslims.

With the Treaty of Athens in 1913, it was accepted that hundreds of thousands Muslims living in Greece would be subject to the Community of Muslims for all their cases. The community was to be founded by them, and it was accepted as a legal entity. The status was confirmed along with the Treaty of Lausanne in 1923. With the mufti election in 1920 and the code on the direction of foundations, Greece accepted the provisions of the Treaty of Athens as part of the domestic rule of law. The mufti and its representative were chosen by the board of the Community of Muslims. The election results were reported to the shayk al-Islam in Istanbul by a Greek envoy, but the procedure was abandoned in 1922 when the Ottoman Empire collapsed and the shayk al-Islam was abolished.

The Muslim community in Greece had rights that were not even bestowed on Muslims in Turkey. They married in the presence of the mufti, who was the judge of the Muslim community. Their family and inheritance cases were also heard by the mufti, who judged cases in the context of Sharia law. Documents of these cases are recorded in the Ottoman alphabet, and their verified translations into Greek were reported to official authorities. Islam is not a religion that can be boiled down to just belief and worship, as it regulates all worldly affairs. For Muslims, it is a requirement of Islam to follow Sharia also in matters of law.

The Greek military junta that took control in the 1967 coup charged the government for mufti elections. In the aftermath of the fall of the junta, Athens did not revert back. As they could not elect new members, the board of the Community of Muslim lost its function. As a requirement of a presidential order dated 1990, the 1920 code was abolished, and muftis began to be appointed by governors, who selected them from among imams serving for 10 years. Ankara rejected this, and a diplomatic crisis arose between the two countries.

Turkey and Greece conducted their population exchanges in 1924, except for those living in Istanbul and Western Thrace, and today the number of Muslims in Western Thrace is 150,000. The Treaty of Lausanne covers the Muslim community in Greece, as Ankara was still a Muslim government that had not yet embraced nationalist policy. For that reason, Athens insisted on using the term "Muslim" instead of "Turkish." After all, the Muslim community in Greece did not only consist of Turks.

In 1984, the government of leftist Prime Minister George Papandreu offered the possibility of getting married in municipalities to those who wished to do so. Until then, Muslims got married in the house of a mufti, while Christians married in churches. A criminal lawsuit filed against a bigamist Turk in Xanthi was rejected by the court in the 1990s. In 2013, a high court in Greece ruled against the will of a Muslim from Western Thrace as it was against Sharia law.

Despite oppression, the Muslim community in Greece achieved standing clear of the official ideology of the very first period of the Turkish government. While girls and women were free to attend schools in Greece while wearing headscarves, it was banned in Turkey. Muslims are free to have Friday off, as it is the holy day in Islam, and they could even wear fezzes. They were free to write in the Arabic alphabet. Religious fests and holy nights and days are accepted as holidays for Muslims. Thus, those who were against the Kemalist regime in the first years of the Republic, moved to Western Thrace to live.

Today, there are just two active madrassas in Western Thrace from the Ottoman era. These madrassas were given the status of high schools by Athens, and their graduates were accepted to the Thessaloniki Institute of Pedagogy and appointed as teachers in Turkish schools. Due to the intervention of Ankara, which tried to appoint schools teachers that could propagate its own ideology, the institution was closed.

In the 1920s, the Muslim community in Greece was labeled "Friday vacationers" and "Sunday vacationers." Thus, the Muslim minority kept losing power to Athens. The Turkish Consulate in Komotini recorded the names of those blacklisted as "Friday vacationers" in a "black book" and stonewalled their visa permits. The situation came to an end when Prime Minister Turgut Özal abolished the visa requirement. Ankara's policy on the Turkish community living abroad was always problematic as the only aim was to export the official ideology, which made Athens more powerful. Trying to turn the situation into an advantage, Athens has been conducting illegal oppression, especially on Muslim foundations.

Today, there are three muftis, one each in Komotini, Xanthi and Didymoteicho. As Rhodes was given to Greece after World War II, it is not completely subject to the provisions of the Treat of Lausanne. Also, in Komotini and Xanthi there are two elected muftis financially and morally supported by Ankara. No matter how Athens prosecuted these muftis on the grounds that they are fake, it stepped back after relations with Ankara got better.

Two imams appointed and paid by the two muftis serve in most mosques. The payment given by the foundations is equal to half of the payment of others. Nevertheless, there is no problem among the imams, and the official mufti does not interfere in the case to avoid any argument. In fact, on the condition that such autonomy can be preserved, it is not that important how muftis are appointed to their positions.

When Komotini Mufti Hüseyin Mustafa, who was appointed according to the old methods, passed away in 1985, Athens appointed Hafiz Cemali Meço, a graduate of Al-Azhar University in Cairo, as mufti, acting against the practice of the time. In 1990, the mufti of Xanthi, Mustafa Hilmi, also passed away. His son, Mehmed Emin Ağa (1931-2006) was his representative. Suspected of being close to the Ankara regime, Athens did not approve Mehmed Emin as the new mufti on the grounds that he did not have a university education. Thus, he was called an elected mufti as a result of an election conducted by taking a count of hands in some village mosques. In 1922, İbrahim Şerif became the Komotini mufti with the same method. The case of appointed or elected muftis, which aroused tension between Ankara and Athens, dates back to this case.

Mehmed Emin Ağa, the elected mufti of Xanthi, was convicted by a Greek court because he unlawfully served as mufti and sold foundation properties. Although his penalty was turned into pecuniary punishment, he preferred serving his time in prison, thinking that he was serving for his struggle. In the past, Ankara did no stand up for the application of Sharia law in Greece, as the muftis it supported did not have formal authority.

Now, Tspiras is taking advantage of this. He said that both sides must compromise for the application of Sharia law; otherwise authority will be in the hands of the Greek courts. However, international status cannot be changed by the Greek government. In 2013, Greek Minister of Education Yorgo Kalancis praised his country by saying: "We are the only country applying Islamic law in the EU. Muslims for Muslims. We will support you in your fight."