The Mediterranean in turmoil 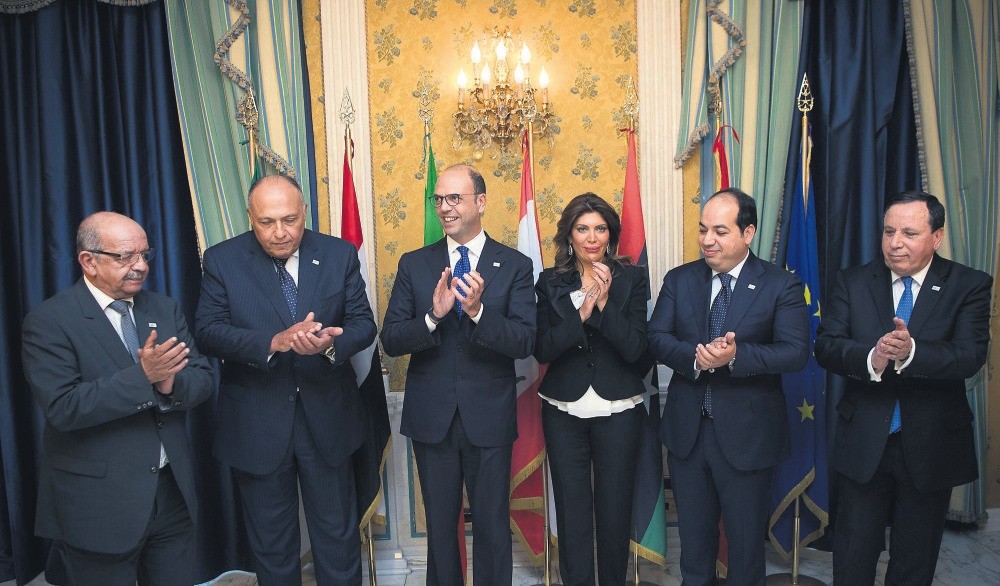 Italian Prime Minister, Paolo Gentiloni speaks during the forum of Mediterranean Dialogues in Rome, Italy on Dec. 2.
by Jane Louise Kandur Dec 09, 2017 12:00 am

At the end of November, a number of high-ranking statesmen, journalists, academics and NGO officials gathered in Rome for the third edition of Mediterranean Dialogues (MED), this year MED carried the heading ‘Beyond Turmoil - A Positive Agenda,' in other words, the discussion was to be on how to drag the Mediterranean region out of the turmoil in which it finds itself

Mediterranean Dialogues (MED) focus on countries that surround the Mediterranean Sea. These countries include Algeria, Egypt, France, Greece, Israel, Italy, Lebanon, Libya, Morocco, Spain, Syria, Tunisia and Turkey. Most of these countries made a strong presence at MED, with notable weak representations from Greece and Spain.

Looking at this list, it is clear why the title was "Beyond Turmoil." Egypt, Iraq, Lebanon, Tunisia, Algeria, Morocco and Turkey all have undergone some form of violence - be it a successful or failed coup or revolution. Libya and Syria are both in the throes of civil war. Greece is struggling with huge debt. France is blighted by local extremists carrying out acts of terrorism. Spain is divided, and there seems no easy way out. We could go on, but the long and short of the matter is that the Mediterranean is beset with troubles.It is interesting that while some countries made a weak showing, other countries that have little to do with the Mediterranean were out in force. For example, China, or Russia, or the U.S. These countries do not have lands bordering the Mediterranean Sea. What they do have is a very strong interest in the region.

In addition to civil war, coups or thwarted coups, resigning prime ministers, or blockades imposed by neighboring countries, the Mediterranean region and its friends suffer from many other problems. For example, there are a large number of people who want to migrate from sub-Saharan Africa. Others are fleeing the chaos in Syria or Iraq. These people come to Turkey, Spain, or Italy for refuge. They come in overloaded boats. They go through war zones, hiding out in mountains at night. They risk their lives. Migration is not a new phenomenon, but as was commented at MED, this is the first time that such a large number of people have risked their lives so blatantly.

The recent American tax cuts mean that there will be even less money available for funding investment in foreign lands, investment in the people's future. But, according to Jeffry D. Sachs, the director of the Earth Institute, Columbia University, there will always be money for wars. He's right. The myopic American approach is that it is easier to kill people off than to educate them. It is easier to bomb their homes, their places of employment, their schools and hospitals. It is easier to invest in an immediate but temporary fix rather than focusing on a long-term permanent solution.

But there is another side to the story. While the Mediterranean - read for this the Maghreb, Arab countries, Turkey and Southern Europe, is perceived by the USA and the EU - read for this Northern Europe - as an area of turmoil and problems, China sees the region as a place for future investment. China has already invested great amounts into African countries and throughout Asia, helping to build the infrastructure. Although there are those who read ulterior motives in these actions, at the end of the day such investments create jobs. Which creates income that can be fed into education. China is not interested in war. While the West is trying to stifle and cover up its past errors, China is interested in investing in the future.A number of commentators at MED expressed their bemusement at the stupidity of American foreign policy. They characterized it as one disaster after another. And these conversations took place before this week's disaster- the declaration that the U.S.A. now recognizes Jerusalem as the capital of Israel. One disaster after another...

Abdelhak Bassou, a senior fellow of OCP Policy Center, succinctly summed up the problem of the myopic West. If Western governments had invested one-tenth of what they had spent on the war on terror into education, ISIS would have great difficulty in finding recruits for their ranks. The people who are fighting in Syria, who are becoming radicalized in Europe, who are joining terrorist organizations from Africa - these were all children when the Twin Towers were struck by airplanes. But being denied an education in the Maghreb, being marginalized in Europe means that these youngsters grew up feeling rejected by their society and by the world.

Their so-called radicalization has nothing to do with Islam. This was reiterated by many speakers during the three days of dialogue, but was brought particularly to the fore during the conversation titled Rooting Out Radicalization. According to Olivier Roy, joint chair in Mediterranean Studies at the European University Institute, rather than there being a radicalization of Islam, Daesh is benefitting from an Islamization of radicalization. That is, the majority of terrorist recruits are simply looking for something to rebel against. Their rebellion has been dressed up in an Islamic camouflage, but in fact has nothing to do with Islam, or religion of any form. It is a protest, a shout of desperation.In order to understand how important investment in education and jobs is we do not need to look far afield. Under communism, Eastern Europe had poor infrastructure. When these countries abandoned communism, there was a sudden realization that there would be hardships. Jobs were going to be scarce and public services, including education would be hit hard.Rather than investing in the regions, helping them to grow and become stable, there was a sudden rush by the European Union to include

these countries in its folds. The people in these countries discovered overnight that they could travel throughout Europe and find employment anywhere. Once again, if a person has a good job, a good stable income, there will be very few who would want to leave their homes or their loved ones. But in Eastern Europe, there was no stable income. As a consequence, people started to migrate to Europe to find employment. As most had learned some form of English at school, the U.K. was an obvious magnet. And what was the result of an influx of East European refugees? The British voted themselves out of Europe; many voters saw this as the only way to protect their own jobs and income.

One thing that was remarkable about MED was an unfortunate Orientalist slant. The countries that were being discussed were, basically, the troublemakers. The Maghreb. Iraq, Syria, Iran, Turkey. For example, in the session: "Governing Local Identities: Decentralization as a Solution?" the dialogue was monitored by Dina Fakoussa, the head of the Middle East and North Africa Program, DGAP, Germany. The participants were from Iraq, Qatar, Tunisia and an expert on the Middle East. But Middle East and Maghreb countries are not the only ones to face difficulties with local identities. The question that ran through my mind, over and over, was where was Spain? Not only is Spain clearly a Mediterranean country; in Catalonia it has a living, breathing local identity problem. But this situation was not even mentioned.The message was sadly clear; the turmoil in the Mediterranean area is down to these 'troublemakers'. These countries need to be sorted out. And it is the rest of the Mediterranean area, i.e., Europe, that should help them to solve their problems. This was the inescapable message.

But then an alternative message was given. On Friday afternoon, Fatma Şahin, the mayor of Gaziantep gave a talk. She spoke about how a city of 2,000,000 residents coped with a sudden influx of 500,000 refugees.

The first thing Şahin said was that they had had no choice but to accept these people. Turning them away, figuratively pushing their life rafts back into the ocean, was not an option. Rather, she used the smarts of a woman and decided that she would not follow the rest of the world. She would manage this migration. In order to do so the mayor of Gaziantep focused on education, health, employment and security.Şahin refused to perceive the influx of half a million new people into the city as a catastrophe. Rather she saw it as an opportunity for development. As over 100,000 of the new residents were children, something had to be done about education. At the time they arrived, only 3,000 of these children were in education. Today, three years later, 67,000 Syrian children are in full-time education. For Turkey, the amount of Syrian children in full-time formal education is 30 percent; although all Syrian children are entitled to be enrolled in full-time education, the difference in language and culture, parental concerns and other factors have limited their inclusion. But in Gaziantep, 67 percent of Syrian children are in full-time, formal education.Three thousand orphans have been enrolled in schools. One school has been purpose-built to help deal with the influx of new students. A new hospital was built for the same reason. Where there are families, there will be babies. And this creates an immediate need for healthcare. Without adding to the infrastructure, chaos would have ensued. Japan - not Europe, but Japan - provided a great deal of support for Gaziantep. One of the most important infrastructural challenges in Gaziantep was supplying water; this problem was solved with the help of the Japanese.

The orientalist slant of the MED was probably accidental. To be fair, to a large extent many of the problems faced in the region do stem from Iraq, Syria, the Maghreb and sub-Saharan Africa. But there are countries in Europe facing great challenges that have nothing to do with Islam, Muslims or Muslim-majority countries. Debt in Greece, autonomy in Spain, radicalization and the forward march of the extreme right in France, Belgium, the Netherlands and Germany. Although the conversations at MED were informative, insightful and often inspiring, it would perhaps have been useful to be able to focus on some of the other problems in the region. What is perhaps most striking of all is that the one success story presented at MED came from South East Turkey. Someone finally got it right. And that someone is a Turkish woman. Now there's a story.