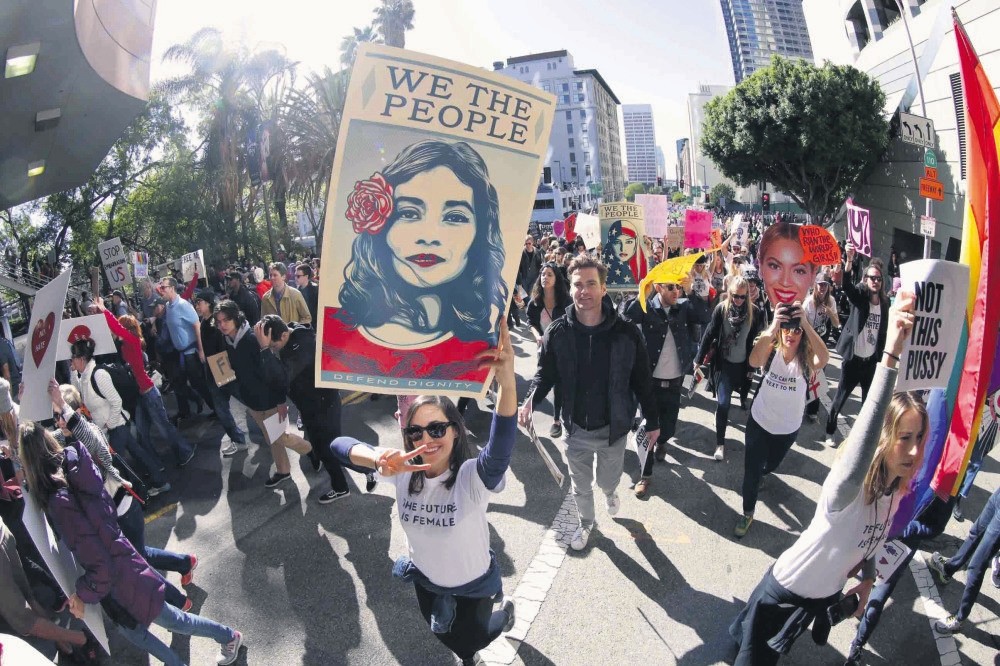 Following President Trumpu2019s inauguration as the 45th U.S. president, protests and rallies were held over 30 countries around the world in solidarity with the Womenu2019s March, in defense of womenu2019s and human rights.
by Fatima Abushanab Dec 12, 2017 12:00 am

Women's rights are one of the hottest topics in the world right now, and women who used to stay silent on violations of their rights are now speaking up, condemning the men trying to colonize them physically, mentally and socially

Are we aware of what is going on in the U.S. today with politicians resigning from their positions for violating the privacy of women's personal space? What we see is a very subtle and entrenched separation of women from the rest of the human race. We can no longer turn away from the violation of women's personal space and the violence directed at women. But the issue runs deep and is far more complex and insidious than what is on the surface.

Edward Said's orientalism unpacks the West's opinion that it is stronger, more intelligent and morally superior to its Eastern counterparts. Said's approach reveals the method in which the West constructed its identity based on the "otherness" of the Orient. This approach has also been applied to the dichotomy between men and women where white Western men have always felt more entitled than those of the opposite sex. Frantz Fanon's concept of decerebralizing African people parallels this artificially constructed relationship between men and women in which the former constructs the latter's identity through control and invasion. Western men have striped women of their own agencies, denying them the freedom to speak and represent themselves. Instead, men have conveniently categorized women in with the rest of the "others" in the world. This has created the illusion of white male superiority, placing them on a pedestal as the singular power of the human race.

Today, this discrimination against women can be explained, not only through the binary opposition between men and women, but also through the construction of states and politics. According to Dr. J. Ann Tickner, Hans J. Morgenthau's six principles of power are androcentric because they focus on particular traits rather than universal qualities of human beings. This analysis is relevant in politics and international relations because the author underscores that even when it comes to realism, Western men are the primary actors in political stages worldwide. In this context, not only are men associated with politics and strength but also credited with molding powerful institutions to serve masculine identities. This is intrinsic in Winfried Baumgart's definition of imperialism, which is basically the imposition of political power. At this point, we cannot help but pay tribute to Michel Foucault, as well.

Western men, after creating their own legacy of power and domination through the subservience of "others," have unleashed a struggle that is gaining momentum today. I choose to use the term "others" in this discussion because women as a whole span the globe but face the same constant struggle in their respective communities, all fighting societal marginalization for voices and representation.

Today, American politicians' depictions and inappropriate behavior toward women showcase that gender roles that were once acceptable in the Western men's world will no longer be tolerated and accepted.

Ending violence against women across the world first and foremost begins with a sound educational curriculum that targets elementary-age children. Abuse, bullying and gender-based violence is an issue that kids are exposed to very early and can extend throughout the child's more impressionable years. We see it at school, in the work place and across media. This is a growing societal issue that so many women and girls witness and experience on a daily basis. The solution to this crisis must first and foremost begin with political activism and women's active participation in communities that have spread the "other" rhetoric, portraying women as weak, deficient and lower than Western men. It is about creating alliances against bullying with those who have been ignored due to ethnicity, gender, religion or race.

If we stand on the sidelines, we are doomed to remain in this oppressive vicious cycle perpetuated by a group that favors its own image over the rest. In the perspective of colonization, Homi Bhabha argues that this trend has made the colonizer dependent on the colonized where it has become necessary for Western men to identify themselves and their characteristics based on the otherization of women. In this framework, modern women, unlike those of the past, have started to resist and not fully comply, now possessing the strength and subjectivity to stand against the injustice. Jean Comaroff and John Comaroff argue the essence of colonization is to transform others by silencing them. This might have been the case before, but not anymore. This tactic is now met with loud defiance and resistance to the repression, marginalization and violence.

As Ashis Nandy stated, colonialism must first be defeated in the mind before it is possible to change the human race. The recent revelations in American political and social circles are emblematic of neocolonialism at work. First, let us start right there to end discrimination against women.