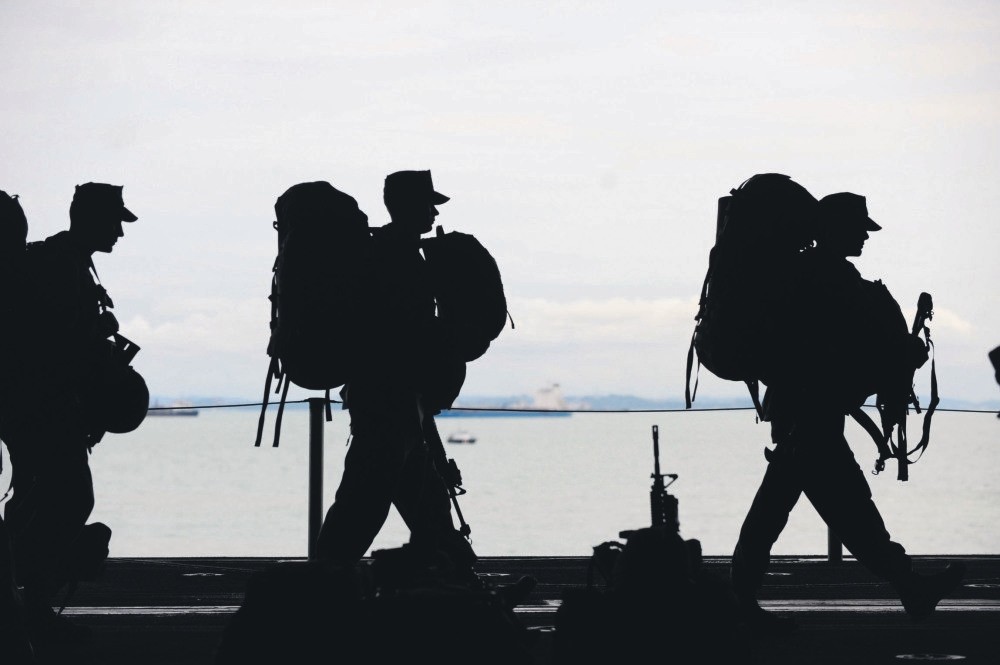 Soldiers line up on a military ship. Male Turkish citizens are required to fulfill their obligatory military service, but would it be possible to use this manpower in other military areas?
by Emir Ekşioğlu Dec 19, 2017 12:00 am

Turkey, a country known for its military power, has compulsory military service for all male citizens, but this manpower could also be used in many other branches of the military, such as for technology and software

Technology, without a doubt, is one of the most important issues of our age. It is rapidly becoming a part of our everyday lives, making things easier. It helps other sectors grow while forcing others, like the automobile, education and construction sector, to adapt to advancements.

Likewise, the military and defense industries must take these developments into account when planning for the future and one specific technological area they should not overlook is software development.

Software development has come a long way in the last decade. It has revolutionized different sectors and one of them is the automobile sector. Elon Musk's Tesla is now creating self-driving electric cars for the masses. Tech giants Apple and Alphabet (Google's parent company) are also working on their own version of self-driving cars.

You may have also seen Boston Dynamics' Atlas, the robot that took the internet by storm with its acrobatic movements. For some, it was a cool video, for others it was just horrifying. The second group of people is not entirely wrong here. Imagine Atlas in a few years' time and we wouldn't want "I, Robot" to become a reality, would we? Personally, I don't think I would be as lucky as detective Spooner.

The earth isn't enough for humans; we can clearly see that with companies working on colonizing the space, artificial intelligence, and cryptocurrency... Surely, a new life is waiting for us. Imagine an army of the more advanced versions of Atlas and think which army could stand against it?

Turkey is one of the many countries in the world that require its citizens (predominantly, male) do compulsory military service. Now, as modern times ask for modern solutions, wouldn't it be more reasonable if software developers fulfilled their military duty by working on defense software or military technologies?

Some European countries, like Switzerland, Austria, Estonia, Finland, and Greece also have a public service option instead of serving in the military. Conscription is a very important issue in countries such as Turkey, Russia, and Israel that rely heavily on their military might. It also exists in socialist Cuba and South Korea, the software country of the Far East. However, it's interesting that despite its huge military, China doesn't have mandatory conscription.

Those doing their military service undergo heavy training but some of them may also hold different posts, depending on their education or occupation, such as cooks, repairmen, and couriers. So, why aren't software developers allowed to dedicate the entire period of their military service in doing what they do best? I think this can be a very good alternative.

Imagine you're a very talented computer engineer who has a lot of knowledge about coding. You begin your military service and if you're not the Terminator then there is no big difference between you and a regular serviceman. You undergo the same training and you're only manpower for the army. But imagine you spend your entire military service developing software for the military. Because of your work, you've become more than manpower for the army.

Self-driving vehicles, digital mapping technologies and visual recognition are just some of the software that could be used by every single army out there. Developers can not only help our armed forces but also the government in economic terms. You're also doing what you know and love and instead of losing the skills during your time in the army you find the opportunity to improve it.

I think this should be extended to the officers in the army as well. To be a country with a respectable military, working on military software is absolutely necessary. The defense industry shouldn't be handed over to private companies, and even though most of them are supported by the government, the army should be able to take care of itself. I think this can dramatically improve the development of military technologies.

Turkey, which currently spends $15 billion on its military, should also start working towards this goal. This will also help the country close the gap in the military budget and generate revenue.

There's no doubt that software is very important today and the government should do everything to help developers, not only in the army but in every sector possible.