A Child of Palestine 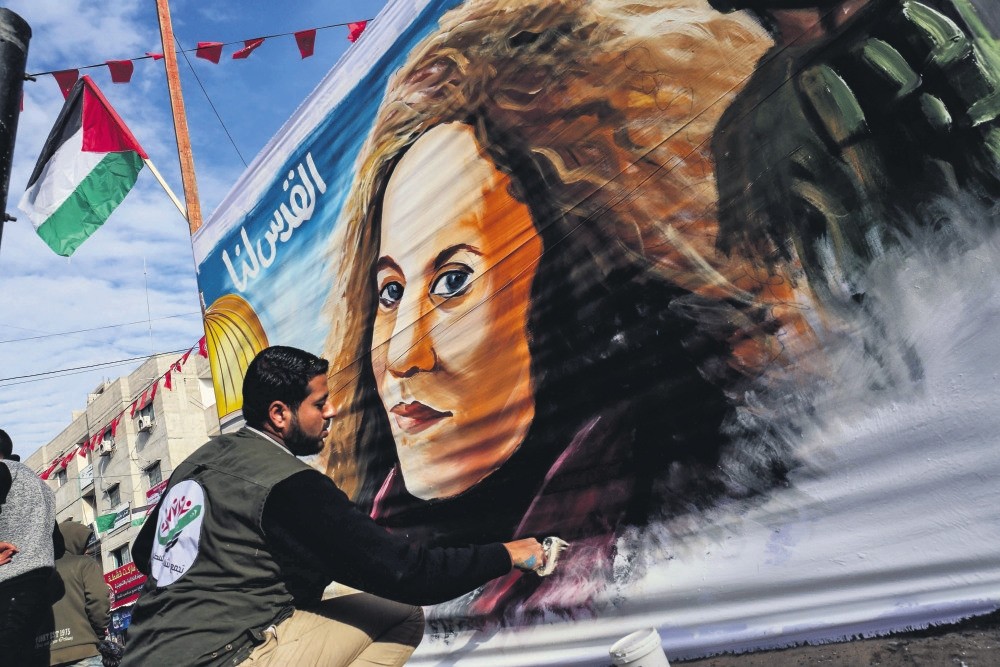 A Palestinian artist paints a portrait of Ahed Tamimi, a 16-year-old prominent campaigner against Israel's occupation and who is currently detained, on a large fabric in Rafah in the southern Gaza Strip.
by Jane Louise Kandur Jan 06, 2018 12:00 am

Many people have spoken out about Trump's decision to move the U.S. Embassy from Tel Aviv to Jerusalem, and President Erdoğan, Jeremy Corbyn, many American lawmakers, Pope Francis and many public opinion leaders have declared that this decision was a horrible mistake, but it is not the only horrible mistake being made in Palestine today as the harsh, cruel treatment of Palestinian children, girls and women by heavily armed Israeli soldiers is something that happens every day

Pope Francis has been outspoken on the matter of Jerusalem. He said that "Jerusalem [is] symbolic for all … peaceful coexistence between peoples and different religions." In response to U.S. President Donald Trump's unilateral decision to take a ridiculous illegitimate stand on this matter, the pope spoke out on Vatican Radio, saying: "My thoughts go to Jerusalem and I cannot keep silent my deep concern for the situation that has been created in the past days. … I would like to make a heartfelt appeal for everyone's commitment to respect the city's status quo, in conformity with the pertinent United Nations resolutions."

Unlike Trump, the pope did not arrive at his position on this matter on a whim, or based on uninformed, partisan advice. The Holy See, the government of the Roman Catholic Church, has reiterated its "well-known position regarding the singular character of the Holy City and the indispensability of respect for the status quo, in accordance with the deliberations of the international community and the repeated requests of the hierarchies of the Churches and of the Christian communities of the Holy Land."

On Dec. 21 the Holy See issued a statement to the United Nations, in appreciation of the member states "commitment to averting new rounds of violence and to promoting dialogue and negotiations … on … the question of Jerusalem." The statement also says that Jerusalem is a unique city of universal interest. The city is a symbol for "millions of believers worldwide. … Its significance goes beyond the question of borders."

And then last week, the pope and President Recep Tayyip Erdoğan had their second phone conversation this month on the Jerusalem crisis. Both have expressed strong opposition to Trump's announcement. The president told the pope that he appreciated his stance and both agreed that the status quo must remain. Both leaders expressed their pleasure at the U.N. resolution that rejects the U.S. embassy move.

Jerusalem is important for both leaders. For Erdoğan, it is the capital of the Palestinians, whose cause he champions. For the pope, it is an important Christian location, and considered holy. On Christmas day, hundreds of people were in Manger Square in Jerusalem to celebrate the holiday. But the celebration was less crowded and less enthusiastic than in previous years. Bethlehem's mayor, Anton Salman, said that they had limited the celebrations due to the tension caused by Trump. "We decided to limit the Christmas celebrations to the religious rituals as an expression of rejection and anger and sympathy with the victims who fell in the recent protests," the mayor said. He went on: "We want to show the people that we are people who deserve life, deserve our freedom, deserve our independence, deserve Jerusalem as our capital."

In his Christmas message the pope underlined many of the problems in the world. He stated that Christmas encourages Christians to focus on the symbolic nature of Jesus as a child, to recognize him the faces of other children, especially for those children who have "no place in the inn"

"We see Jesus in the children of Africa, especially those who are suffering in South Sudan, Somalia, Burundi, Democratic Republic of Congo, Central African Republic and Nigeria.

The concern shown for all children is a truly profound sentiment; such expressions by the pope are clearly heart-felt. There are so many children who are deprived – of food, education, shelter, or just simply basic human rights. The pope mentioning the children in the Middle East, in Palestine, first is no accident.

Last Monday a 16-year old Palestinian girl was arrested and charged with assault. She had punched an Israeli soldier in the face.

Some media outlets depict her as a project child. They claim that her father Bassem Tamimi, a Palestinian activist, and her mother used the child to create a sensation. The mother was charged with incitement to unrest for live-streaming the attack.

Ahed Tamimi confronted soldiers outside her family home in the West Bank village of Nabi Saleh. The soldiers had just shot her 15-year-old cousin point blank in the face with a rubber bullet. This young man, this child, suffered internal bleeding and had to be put into an induced coma.

In earlier years Ahed was filmed biting a soldier who

was trying to arrest her little brother. Ahed was presented with an award in Turkey for her bravery in confronting an Israeli soldier.

Some media outlets have asked why there is no outcry for Ahed as there was for Malala Yousafzai. Many others answer because she has been groomed to be a radical activist by her parents and community. But her father belies all this: "My daughter is just 16 years old. In another world, in your world, her life would look completely different."

Yes, in a different world, Ahed would live in a safe home, she would be far too preoccupied with her own teenage life to worry about politics. She would be trying to get her homework done (or not), she would hang out with friends; she would not have the onerous burden of having to protect her home and family from heavily armed soldiers who can stroll in whenever they feel like it.

Harriet Sherwood (https://www.theguardian.com/commentisfree/2018/jan/02/ahed-tamimi-israel-occupation-palestinian-trauma) interviewed Ahed: "When I asked her how often she had experienced teargas, she laughed, saying she couldn't count the times. She described military raids on the family home. I observed Ahed and her brothers as, over and over again, they watched footage of their parents being arrested and their uncle writhing on the ground after being shot."

Sherwood tells us that "four years ago, alongside the fledgling activist who insisted to me she was not frightened of the armed soldiers she passed every day, there was a little girl anxious about being photographed near a military watchtower, and who – according to her parents – sometimes shouted out in her sleep or woke up sobbing."

Ahed may not be a Yousafzai. Yousafzai was denied education simply because she was a girl. She was shot because she was trying to better her life. The Taliban, a group abhorred throughout the Western liberal world, shot Yousafzai. What happened to her was awful, and it became a feminist cause. Girls, no matter where they live, are entitled to education.

Ahed is not the same. Ahed does not symbolize a feminist cause. Ahed does not symbolize an educationalist cause. Ahed has no freedom. Ahed knows that on any given day soldiers who are considered to be legitimate by the Western liberal world can murder any given member of her family. Ahed symbolizes human rights. Ahed deserves her inalienable human rights – the right to live in freedom and safety, the right to property, the right of nationality and the right to live in a free and fair world. Ahed's biggest challenge is that the world just keeps looking the other way.