Tamimi's story examplifies how Israel personifies devil of its own myth 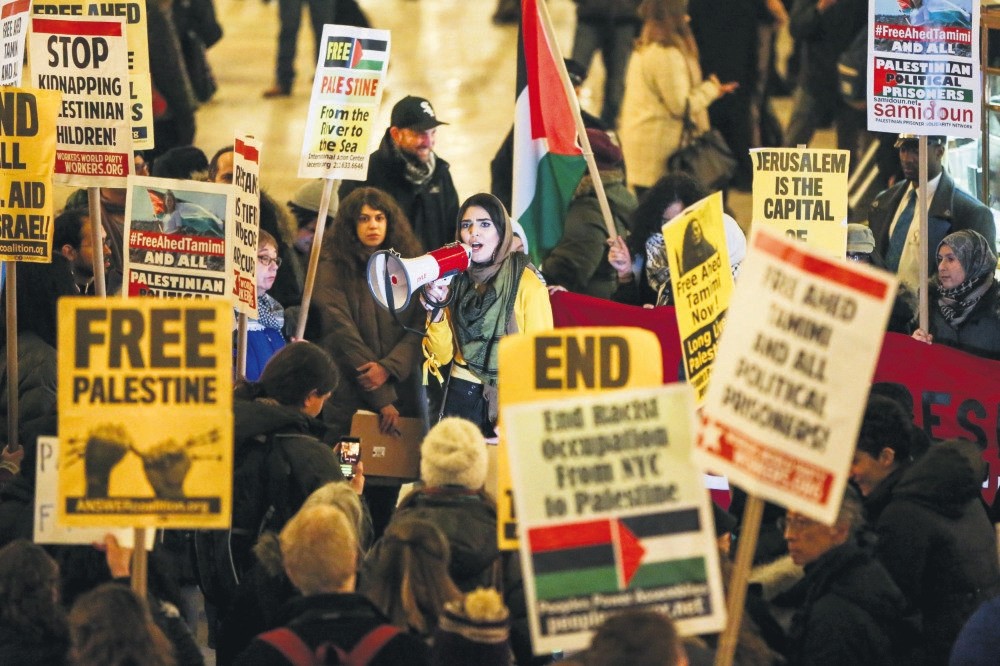 The Israeli state has reincarnated the story of David and Goliath in its conflict with Palestine, trying to portray the people of a country being systematically forced out as monster yet Israel seemss to have fallen into its own trap

"I challenge any one of your miserable army, king or slave, to fight a duel with me! The victor will make his nation victorious, and the other nation will surrender!" Philistine giant Goliath of Gath said in the Valley of Elah, during a battle where two armies faced-off. The larger and better armed of those armies was the Philistines, and the smaller one was that of Saul, king of the Jews. Filled with terror, no Jewish man dared accept the challenge of the giant clad from head to toe in armor, iron and brass.

This famous story of David and Goliath from the Old Testament and the Bible became one of the most accepted Judeo-Christian stories, molding the iconic myth of the Zionist frame of mind, especially after the 1948 Arab-Israeli War. At the time, they presented the state of Israel as a defenseless David facing the monstrous Arab Goliath to justify the occupation of Palestine. The story became a focal point for Zionist narratives in Israeli culture depicting the Israel-Palestine conflict as a war of the few against the many, a heroic victory of an underdog.

At the end of the story, the well-armed giant was defeated by a boy from the Israelites, David, who was not a warrior but a shepherd, who stood against the villain unarmed saying: "I am not used to such armor. God shall be my shield and my strength, and these will be my weapons." David, who claimed his place in history as a great ruler of ancient Israel, King David, killed Goliath with just a stone.

The story of David and Goliath has offered inspiration for many over the centuries as a tale of an ancient hero that overcame tremendous obstacles and triumphed thanks to his faith. It also lent hope to the Israelites that they could once again hear God's voice and re-establish a state for themselves. The problem is that they established their state on land that was already home to a nation: Palestine.

On Dec.19, 2017, Ahed Tamimi, a 16-year-old Palestinian, was arrested in her home by the Israeli army and border police in the occupied West Bank after a video of Tamimi slapping an Israeli soldier went viral. The incident happened after an Israeli soldier shot her 14-year-old cousin in the head with a rubber bullet and fired tear-gas canisters directly at their home. "Ahed was trying to force them to leave to prevent the soldiers from hurting anyone else," said Bassem Tamimi, the young girl's father, to Al-Jazeera.

So, how did Tamimi, a familiar face at protests in her hometown, Nabi Saleh, manage to annoy the Israeli state so much that they felt the need to arrest the minor in her own back yard? An Israeli army spokesperson said Tamimi was suspected of "assaulting a soldier and an Israel Defense Forces [IDF] officer."

It was indeed an assault but not in the way the Israeli spokesperson stated. The issue was above all psychological. What actually hit the Israeli soldiers was not the small strike of a young girl, but the outstanding truth that they are not David but rather Goliath in their own myths.

After the release of Tamimi's video, Israeli Minister of Education Naftali Bennett declared that the two Palestinian girls "should spend their lives in prison." It is not hard to believe that a man responsible for education in his country could say those harsh words since the Israeli educational system is based on the very same myths meant to create national pride in children, which young Tamimi already possessed as a Palestinian dedicating her life to standing up against the occupation of her land.

Israelis, who speak out for minority rights, standing against all kinds of oppression, are blind to the rights of Palestinians. Even the feminist organization Zioness, a Jewish progressive-leftist movement that declared a stance against all kinds of oppression, ignored Tamimi, not breathing a word about her unjust detention. She is indeed the empowered figure that so-called feminists are desperately looking for, standing against an armed soldier, an oppressor. Aside from Zioness, there has also been a hypocritical lack of support for Tamimi from Western feminist groups who pride themselves in women's empowerment. Tamimi was not a girl oppressed by the Arab patriarchy or forced to wear a hijab by some kind of so-called Islamic dictation. If she were, surely the incident would have drawn more attention from Western women rights activists. She is a brave girl seeking justice against oppression rather than self-empowerment, criticizing the occupation of an army that ironically consists of almost 50 percent female soldiers.

The attitudes toward Tamimi have demonstrated the controversial reality that Israel's national pride has been based on over the years. There is indeed a war between the weak and the strong, the minority and the majority, woman and man, a civilian and a representative of law and order, an innocent and an oppressor, just like David and Goliath, which has become a symbol of the fights between unequal sides. But today, David is Ahed Tamimi, standing unarmed against the traditional roles that Israelites endorse for themselves. David is every single Palestinian child who stands against fully armed occupying forces with "stones" in their hands.